It will take time for federal tax credits on used EVs, PHEVs and fuel cells to gain traction

Starting next year, consumers buying used EVs from car dealers could save up to $4,000 under a new U.S. law. But their choices — at least in the near term — could be slim.

WASHINGTON — The pool of used electric vehicles eligible for a tax credit taking effect next year could be slim to start out, with consumer choices — at least in the near term — limited to models with shorter battery range that were built mainly to meet tougher emissions regulations, several industry experts and dealers told Automotive News.

The Inflation Reduction Act includes, for the first time, a tax credit for income-qualified buyers that's equal to 30 percent of the total cost of a used battery-electric, plug-in hybrid or fuel cell vehicle, and capped at $4,000. Vehicles must be at least two model years old and cost $25,000 or less, but they are not subject to the same stringent sourcing and assembly requirements as the revamped tax credit for new EVs.

While it sounds great in theory, in practice it could take between three and five years before the credit is used regularly by consumers, said Ivan Drury, director of insights at Edmunds.

Drury: Finding a used 200-mile EV that qualifies may be impossible right now.

"[It's] going to be hard to find a 200-mile EV — very hard, if not impossible — that qualifies for this credit right now," Drury told Automotive News. "You're going to have a lot of 'compliance cars.'"

Of the more than 1 million used vehicles Edmunds had listed for sale from its dealer partners in late August, Drury said 0.04 percent were battery-electric vehicles priced below $25,000. The average model year for a used EV priced at $25,000 or less is 2016, and for those more than $25,000, the average model year is 2020 — a "completely different cast of characters," he noted.

In time, vehicles such as the newly price-slashed Chevrolet Bolt could become a larger part of the pool. The 2023 Bolt EV starts at $26,595 and the Bolt EUV at $28,195, both with shipping.

Off-lease EVs — despite an overall industry decline in leasing — also may eventually help to fuel inventory and put downward pressure on prices, Drury said. As could off-rental vehicles, he added, noting an uptick in rental agencies such as Hertz ordering EVs.

For now, the tax credit's $25,000 threshold is "going to hinder the subset of vehicles that it's applicable to but also to the subset of consumers that find a vehicle that actually fits their needs," Drury said.

"We're still trying to figure out exactly how it all will shake out and how it's going to work because a lot of times good intentions come with unintended consequences," said Boeckmann, adding it could still be positive for his stores, which have embraced EVs to, in part, compete with Tesla.

Galpin Motors sells Ford, Honda, Mazda, Volkswagen and other brands and was one of the first dealership groups in the U.S. to sign up with Swedish EV startup Polestar.

Boeckmann: Working it out. 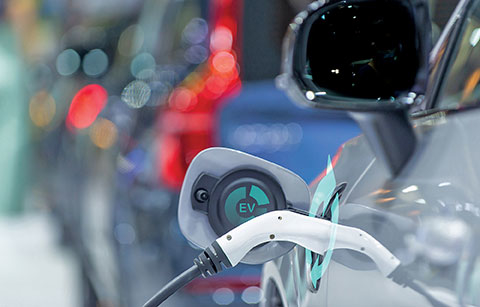 For the first time, consumers buying used electric vehicles may be eligible for a tax credit of up to $4,000 — or 30% of the price of the vehicle, whichever is less — starting in 2023 as long as certain requirements are met. To be eligible:

Like Drury, Boeckmann said the credit — at least in the first few years — will only apply to EVs such as the Chevrolet Spark, Ford Focus Electric, Fiat 500e and Nissan Leaf, with limited capabilities and battery range compared with their new-vehicle counterparts.

"We kind of avoided the compliance vehicles because, quite frankly, there's not a huge interest in them," Boeckmann said. "But now I believe that there will be and certainly more of it, so we will be looking for more of those types of vehicles to have on the used-car lot."

In 2021, Galpin Motors sold about 500 used battery-electric, plug-in hybrid and hybrid vehicles — just under 10 percent of the group's total volume, Boeckmann said. The stores are seeing more order demand from new EVs such as the Ford F-150 Lightning and Mustang Mach-E.

"I know I've got somewhat rose-colored glasses, being in the EV capital of the world, maybe," he admitted, adding that he doesn't see prices for used EVs being driven down under $25,000 for several years with demand being so strong.

For dealers in other states — especially those not subject to California's vehicle tailpipe pollution standards or zero-emission vehicle sales mandate — there is less enthusiasm.

"If the goal is to get people into EVs, used cars needed to be a component of the law," said Steve Gates, a third-generation dealer who owns Gates Auto Family, which operates dealerships in Kentucky, Tennessee and Indiana. "Effectively, it means nothing, particularly in non-ZEV states. There's just no inventory."

His customers generally just want to talk about the industry's future.

"'Is everything going to be EV in a couple of years? What's going to happen if I buy an [internal combustion engine] now? Is it going to be worth nothing?' It's more providing information as opposed to, 'Gee, I just want an EV.' We just don't see that," he said.

In Minnesota — a state that adopted California's emissions standards and ZEV rules in 2021 and is now weighing whether to follow stricter changes in the later model years — EVs made up just 2.3 percent of new-vehicle sales, said Scott Lambert, president of the state dealer association.

"If people aren't buying new EVs and we're not creating used EVs, the tax credit is of less value if there's less supply on the market," Lambert said. "Congress didn't kill the sale of EVs — they didn't turn off the spigot — but they've crimped the hose, to be sure."

"The variable that appears to be having impact is availability," she said, "meaning, is there an EV available in that state that meets the customer's needs?"

With used EVs, battery range and health could be determining factors in a consumer's purchase decision — regardless of whether they have a credit.

"Many of the vehicles in the used market that are EVs, you're going to be looking at 80 miles … maybe 100, but then factor in that the battery doesn't hold 100 percent of the charge anymore," said Edmunds' Drury. "You could be looking at something with 60 miles."

On average, 23 percent of owners of 2020 or newer battery-electric vehicles said their battery range has worsened since they made their vehicle purchase, according to a 2022 J.D. Power study. That percentage rises to 47 percent for vehicles that are seven model years old.

Battery warranty coverage varies by automaker and vehicle, but most coverage is usually around eight to 10 years, according to Stephanie Valdez Streaty, research and development director at Cox Automotive Mobility.

To provide more transparency in the used EV marketplace, her group has been developing a tool for consumers that can certify a vehicle's battery health.

"If it's a used EV, and if it's past that warranty, really understanding the health is going to be critical," Valdez Streaty said.

A refurbished battery pack can cost as little as $2,000 for an early Nissan Leaf, for example, but can exceed $10,000 for a higher-capacity one in newer models, according to AutoTrader, a unit of Cox Automotive.

"I think we're a ways off from having to worry about that, but that's not to say consumers aren't going to ask dealers about it — they most certainly will," said Brian Maas, president of the California New Car Dealers Association.

"Knowing the warranties and the expected shelf life of these batteries is going to be mission critical for both dealers and consumers," he added.