MEMMINGEN, Germany — On an unusually hot day in southern Germany, engineers scurried around ZF Friedrichshafen's test track here to demonstrate one of the biggest potential game-changers in automotive safety in a long time.

The external airbag, shown deflated, is engineered to soften the blow of the oncoming vehicle.

For three decades, automakers, suppliers and consumers have been blithely accepting of a neatly concealed technology that explodes into action inside a speeding vehicle to prevent passengers' bodies and heads from smashing into hard surfaces in a crash. Since the 1990s, the airbag has proliferated from steering columns to seats, side pillars and elsewhere to counteract the Physics 101 laws of motion.

Now, ZF is making a pitch that all of that is no longer enough.

Those devices react to being hit. ZF's new airbag deploys when it predicts a hit is coming and aims to prevent the impact from delivering the full blow. And to do that, a whole list of advanced technologies is coming into play.

"We have been working on this for some time," said Norbert Kagerer, ZF's senior vice president for integrated safety. "But in the past, we didn't have the technology that we needed."

How ZF arrived at this point is a testament to what has been going on all over the world's supply base. ZF is a privately owned German giant with 2018 revenue of $41.5 billion. Only a few years ago, it was primarily engaged in making such hardcore 20th-century parts as axles, transmissions and brakes.

Over the past four years, ZF has been transforming into a purveyor of advanced technologies. In 2015, it bought the U.S. airbag and safety company TRW Automotive for $13.5 billion. It has acquired all or pieces of technology companies that know how to see in the dark, weave radar into safety systems, monitor vehicle passenger movement and analyze and fuse data from different sources.

And how to predict a crash.

Prediction instead of reaction

Last month in Memmingen, ZF's crew was trying, with the seriousness of a rocket-launch team, to ram a lightweight dummy car into the side of a speeding remote-controlled Opel Insignia wagon at a precise spot in a mock intersection.

It took a few tries.

Getting to know ZF 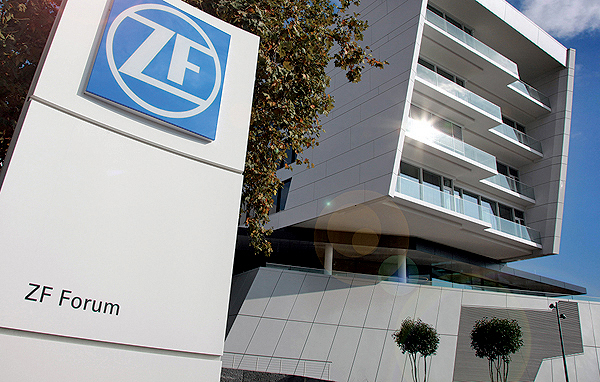 Facts and figures for parts supplier ZF Friedrichshafen
Headquarters: Friedrichshafen, Germany
2018 sales: $41.5 billion
Employees: 146,000
Origins: Founded in 1915 as a producer of mechanical parts for World War I zeppelins; entered the auto parts business in 1919
Ownership: Owned by 2 philanthropic groups: 93.8% held by the Zeppelin Foundation, which supports the social and cultural interests of the city of Friedrichshafen and other areas; and 6.2% by the Dr. Jürgen and Irmgard Ulderup Foundation, an organization focused on education and environmentalism

The dummy car and the Opel were not ending up in the right spot at the right time. As the engineers set up the simulated crash a second time and then a third, ZF executives cleared their throats and issued apologies and requests for understanding that r&d is a science of laboratory precision and engineering persistence.

Then, it happened: A dummy car rushing into the side of the fast-moving, empty Opel triggered an airbag detonation on the Opel that was nothing like the thousands of airbag deployments that go off every year in the real world of driving.

ZF's external airbag didn't react after an impact. It correctly predicted it. Instead of exploding like a shotgun when metal hit metal, it detonated milliseconds before contact. And that heralds a new age in automotive safety.

"The exterior airbag is a whole new frontier for the industry," said Scott Upham, CEO of Valient Market Research in Downington, Pa., and a consultant, executive and market forecaster in vehicle safety systems for decades. "It is predictive crash sensing, and that's a cornerstone for autonomous vehicles in the future."

ZF's executives are fully aware of the implications of their creation. But they say the exterior airbag — which they call Proactive Side Impact Protection — has a more urgent role in the here and now: The company simply wants to help create a safer automobile.

DET GOECKERITZ
ZF’s Norbert Kagerer says the side of the car is where external airbags are needed most.

Indeed, in designing the system, ZF could have put the outside bags anywhere around the body of the vehicle — in the front bumpers, in the vehicle corners, in the rear. But it sees huge benefits in reducing the severity of side-impact crashes, Kagerer said.

"More than a third of all vehicle fatalities occur in side collisions," he told Automotive News at ZF headquarters in Friedrichshafen, a picture-postcard town near Germany's border with Switzerland. "That's a very large area of safety that urgently needs to be addressed by the industry."

ZF's bag is housed along the bottom sill of a vehicle's body, below the doors. It is substantially larger than bags inside the vehicle, spanning from the A-pillar to the rear wheel well.

When it inflates — a process that requires far more gas than an interior bag — it immediately reaches the size of a life raft.

The bag had to be engineered differently than those inside the car. Instead of stopping a moving human body, the exterior bag has to soften the blow of a much heavier and more rigid vehicle.

"This idea has been on the drawing boards at all the major bag manufacturers for a long time, but it's been blue-sky," Upham said. "I myself worked for TRW back in 1996 and 1997, and I was shown drawings we had for external bags even then.

"But the technology didn't exist yet. It couldn't be done until now. The industry has had to move in this direction, innovation on top of innovation, to get here. It has taken advances in materials, advances in inflation, advances in vehicle camera technologies.

"The fact that ZF has arrived here tells the world that we've reached this new point in our technology."

By its own estimates, ZF is the world's No. 3 producer of airbags, behind Sweden's Autoliv at No. 1 and the Chinese-owned Joyson Safety Systems, which last year completed an acquisition of the beleaguered Japanese industry leader, Takata Corp.

Those competitors, as well as other airbag makers, also are working on external bags. The Toyota-affiliated supplier Toyoda Gosei turned heads at the 2017 Tokyo Motor Show with a cartoonish, lime green concept car called Flesby II that proposed a sort of Michelin Man look for vehicle safety with puffy external bags.

ZF expects that its system could be on the market as soon as 2023. It already is in what Kagerer called "pre-development" with a German premium brand automaker he declined to identify.

"We started this development as part of a project with the European government in 2012," Kagerer said. By "we," he means TRW. Kagerer worked for years in aerospace on the development of new engine controls for military aircraft. He moved to TRW in 2002 in occupant safety. He was part of the migration of human resources and technology that became the new ZF when the German company acquired TRW in 2014.

Developing the external airbag has been a lengthy process. For years, TRW communicated its product trajectory with selected global customers.

But key issues held it back.

The sensors that run the system, giving it the ability to truly see what's happening outside a vehicle, were not good enough for real-world deployment. The ability to compute on board the vehicle was not yet adequate. And not surprisingly, the resulting cost of such a system made customers leery.

"The actuator for this was not a problem for us," Kagerer said. "It was a question of getting the sensors to do more. And now we've done that. The sensors have gotten so much better now. Think of that seven-year development. That's a long time for sensor improvements."

The industry's abilities in computer modeling and simulation also are more advanced, he added, and component costs have come down.

For ZF, it also was an issue of being able to better process the data that the sensors were bringing in.

In a crash demonstration, the vehicle on the right has an external side airbag that inflates milliseconds before the dummy car hits.

"We had to determine how accurately we could predict a nonavoidable crash," he said. "In doing this, we had to be very clear to make sure we don't do a wrong deployment."

In fact, many near-collisions occur every day. One car almost T-bones another but stops inches short. A predictive system that responded to such a near miss by unnecessarily deploying an external bag would be a costly mistake in the eyes of a vehicle owner and likely take a toll on sales demand for that model.

Protecting the value of the vehicle itself is another factor behind external airbags, and one that has not existed in the past. Currently, airbags are purely about keeping vehicle occupants safe. Being able to mitigate vehicle damage from a collision introduces a new role.

That's particularly true in the coming era of electric vehicles, Kagerer pointed out. Side collisions will likely damage EV batteries since automakers are widely using architectures that have the battery lying horizontally along the vehicle floorpan, below passengers' feet.

Such future vehicles, including autonomous cars and robotaxis, are roiling the world of airbags.

Autonomous driving theoretically will allow nontraditional seating in a vehicle, allowing occupants to recline or turn sideways. Airbags have been engineered to deploy precisely where an occupant should be sitting. That would have to change.

The rise of such creatures as robotaxis also is expected to unravel the usual design of vehicles, such as where doors are positioned and where structural pillars are placed. Such mundane issues have a big effect on airbags, since they are designed to use the vehicle's structure for placement and to inflate in such a way as to protect the occupant from that same structure.

Airbag makers, including ZF and its safety executive, Kagerer, are buried in such rethinking these days.

"Our mission is clear: We have to protect people on the road," he said. "But we can't put airbags everywhere. We have to focus on putting them where they're needed most. For now, that's outside the vehicle to protect against side impacts."

BMW's E Ink is about more than aesthetics