LOS ANGELES — Like all other automakers, Jaguar Land Rover faces the challenge of helping its dealerships hire enough service technicians amid an industrywide shortage. JLR is recruiting and training U.S. military veterans, a pool of often overlooked technical talent, to fill open positions.

"There are a lot of skills veterans learn in the military that are transferable to automotive technician careers," says Michael Morgan, manager of technical and body training programs for Jaguar Land Rover North America.

Launched in 2016, the Jaguar Land Rover Veteran Careers Program has placed more than 280 veterans from all military branches at the luxury automaker's 205 U.S. retail outlets. JLR has worked with the defense consulting firm Calibre Systems Inc., of Alexandria, Va., to create and operate the program.

The automaker offers courses tailored to veterans at two of its four U.S. technician training centers, in Atlanta and Irvine, Calif.  The courses last 15 days rather than the nine days for civilian trainees to give the veterans added training in electrical diagnostics, says David Melton, lead technical trainer for Jaguar Land Rover North America’s western region.

"Veterans are not familiar with Jaguar Land Rover vehicles, so it allows them to learn about that, too," Melton told Automotive News.

There are two vehicle lifts in the academy's practice area, a room in a low-rise building in an office park. The training is 80 percent hands-on, Melton says, and usually begins with electronics. Only about 10 percent of service work on Jaguar Land Rover vehicles is mechanical, he adds.

"There is not a single thing on the car that does not have electronics attached to it," Melton says. "There is a computer behind everything on that car."

Program graduates earn advanced service technician certification. They go to work at a dealership, where they already have spent a yearlong apprenticeship, immediately after graduation.

"You want them to have some practical knowledge and comfort level with where they are working, then introduce them to the training program," says David Wolfe, director of training and recognition at Jaguar Land Rover Academy. 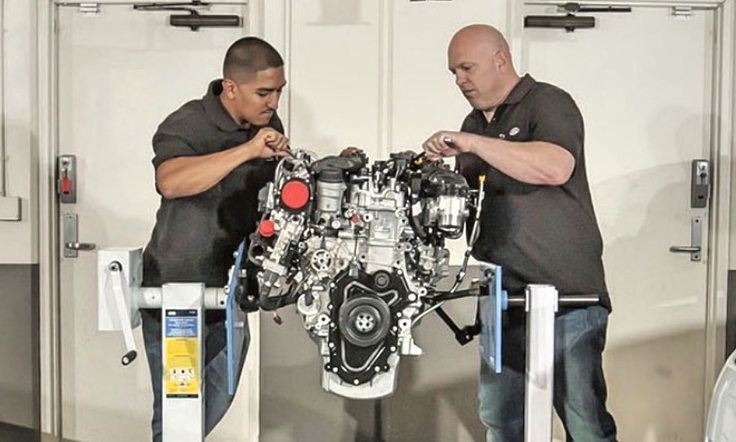 The typical process by which a military veteran becomes a Jaguar Land Rover service technician
1. Calibre Systems recruits and assesses a veteran for a tech position.
2. Dealership interviews veteran and makes decision to hire.
3. Veteran works as apprentice at the dealership for a year.
4. Veteran takes training course at a Jaguar Land Rover Academy.
5. After graduation, veteran begins work as an advanced tech.
Source: Calibre

The Army is best represented among veterans in the training class, says John Galambos, an instructor for Calibre Systems who teaches at the Irvine academy.

"With different branches of the military together, there is a lot of ribbing," Galambos says. "You have to keep that in check."

Veterans with backgrounds in helicopter and tank maintenance and repair are the most common recruits, Melton says. The main hurdle the training must overcome is veterans' customary experience with someone telling them what to do.

"We are trying to teach them the exact opposite," he says. "They aren't used to finding out, 'What is the causation?' "

But the veterans' strengths are far greater. They are used to working as part of a team — essential background for a dealership tech, says Mike Snyder, service manager at Land Rover Palm Beach in Florida.

Snyder, a former Marine, says veterans are also punctual, disciplined and professional. Combine these qualities with their training, he says, and "they are head and shoulders above" other tech hires.

Calibre Systems' recruiters are "poking and prodding in every corner" to find tech candidates among veterans, says Bernard Hyland, the company's director of industry/automotive management services.

They go to career fairs, visit trade schools, attend military events and are connected with organizations such as Marine for Life and Soldier for Life, which help veterans make the transition from military service to civilian life, says Hyland, a retired U.S. Army colonel.

He says Calibre looks for veterans with high mathematical aptitude and learning skills. They must have been honorably discharged and show proof of professional technical training through the military or the National Automotive Technicians Education Foundation.

Recruiters interview qualified candidates for as long as two hours and put them through a battery of assessments. After that, Calibre connects candidates with dealerships for job interviews — usually face to face, but sometimes by phone from as far away as Afghanistan.

The final hiring decision rests with the dealer. But Hyland says Calibre works "to do all the heavy lifting that the retailer would have to do."

Once a veteran is placed as a tech, Calibre makes sure he or she is enrolled in the GI Bill program, which provides a monthly $1,500 housing stipend — crucial for many trainees. "It takes the pressure off the veteran for paying bills," Hyland says.

Jaguar Land Rover and the dealership pay for each veteran's training and absorb all but $1,000 of the cost of a toolbox provided by Snap-on Inc. Dealers often cover the remaining $1,000 expense as well, Melton says. JLR did not disclose the total cost of the toolbox.

James Yeagley, a service technician at Land Rover Palm Beach, graduated from the Veteran Careers Program course in Atlanta in 2016. Yeagley, 47, left active duty in the Army in 2001 after four years of service and is now in the National Guard. In the Army, he repaired M1 Abrams tanks.

"That is where I got the bug for working on things," says Yeagley, who discovered the veteran program though an online job site. He calls the JLR veterans program a "win-win. Anything you could want to learn about these vehicles is there."

Jaguar Land Rover has expanded the training capacity in Irvine from four to six classrooms "in the anticipation that demand will grow for veteran recruits," Morgan says. Although the pool of potential candidates among veterans now numbers in the thousands, he adds, recruitment remains tough.

Starting pay for techs can be as low as $12 an hour, and Jaguar Land Rover must compete with attractive re-enlistment bonuses for veterans and other government jobs that pay as much as $30 an hour, Morgan notes.

He says, "The industry is going to have to deal with the technician pay issue."

FIXED OPS JOURNAL NEWSLETTER: Sign up to receive a monthly newsletter covering on the world of dealership parts, service and collision departments. Included is a digital copy of our every-other-month magazine.