TOKYO — The redesigned QX60 is an upscale, three-row, family-friendly crossover that is a make-or-break launch for Infiniti, heralding a fresh design language and new technologies that the beleaguered Japanese premium brand hopes will reignite its slumping sales.

Among the new flourishes is a reworked front fascia featuring an origami-inspired mesh grille and a "digital piano key" lighting signature. The updated look draws from the Japanese roots of Infiniti, which moved its global headquarters back to Yokohama from Hong Kong last year. The headlights, for instance, get a treatment designers call "kimono folds."

A subtle character line runs straight down the beltline, lending an air of stability, while the roofline cuts a sloping silhouette to a streamlined rear. A two-tone option brings a blacked-out roof to Infiniti for the first time, and a new Moonbow Blue paint job is also on tap.

"This is the new language, and some things are changing as a result," said Alfonso Albaisa, senior vice president for global design at Infiniti parent company Nissan Motor Co. "There is a desire for a bit more road presence. We wanted the body to be much more powerful in the proportion."

Under the hood, a 3.5-liter V-6 engine rated at 295 hp is combined with an all-new nine-speed automatic transmission. Also optioned is the Intelligent All-Wheel Drive system, which features a new direct-coupling awd engagement for more seamless power transfer. Select grades can tow up to 6,000 pounds of cargo — a 20 percent improvement over the outgoing model.

An enhanced ProPilot Assist system also debuts in the QX60. The upgrade coordinates with the onboard navigation system to proactively slow the car around sharp bends or off-ramps. It can also help manage driving in stop-and-go traffic, even after stops as long as 30 seconds.

The 2022 QX60 arrives in the U.S. late this year. Pricing and other details will come later.

Nailing the QX60 launch is critical for Infiniti, which is rolling out a long-awaited renewal of product amid declining deliveries. Infiniti sales in the U.S. dropped 25 percent to 19,071 vehicles in the January-March period, even as the overall market rebounded 12 percent in the quarter.

Meanwhile, the global microchip shortage has forced Infiniti to temporarily suspend production of the QX50 compact crossover at its plant in Aguascalientes, Mexico, and output of the Q50 compact sedan from Japan. Infiniti is rationing chips to support the launches of key vehicles such as the QX60 and QX55.

"It's not just important. It's fundamental to launch this new vehicle in a segment where we have a significant reputation and a significant place," Eric Rigaux, global head of product strategy, said at a vehicle preview June 15. "QX60 is confirmation that Infiniti is back."

Inside, the QX60 ups its game. A new 12.3-inch touch screen display — standard in all grades — dominates the cockpit, sitting on a quilted dash. A 12.3-inch meter display is available in front of the driver and can be paired with a 10.8-inch head-up display.

To improve utility, engineers reworked the second- and third-row passenger space with new ergonomically shaped seats that provide more back support and hip-to-heel room. Captain's chairs are optioned as a second-row enhancement. And in-seat massagers for the front row are another first for Infiniti. The vehicle can seat up to seven people, depending on the grade.

An available Smart Rear View Mirror, which uses a camera to beam live video into the cockpit, provides an unobstructed view behind the vehicle when passengers or cargo block visibility. 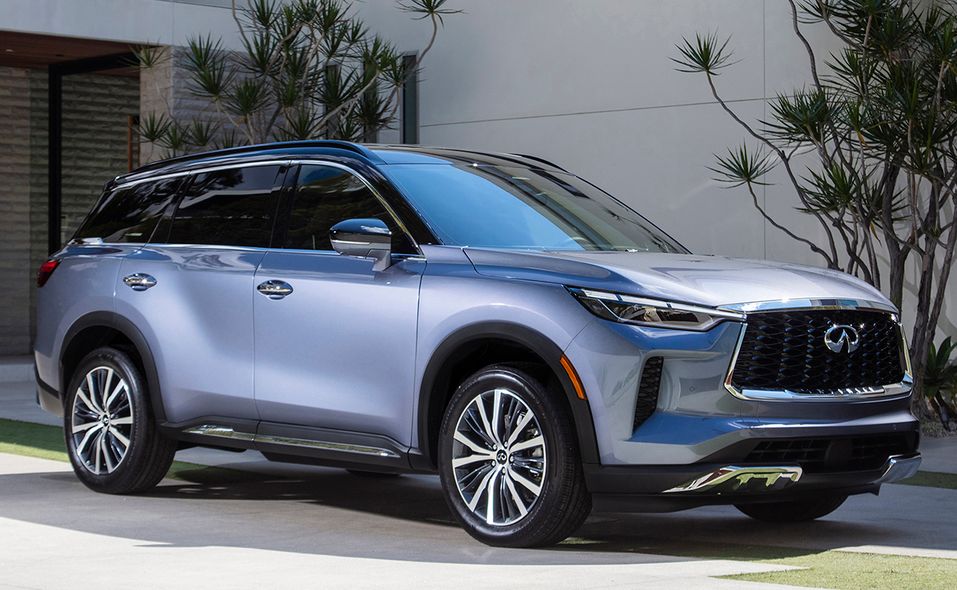 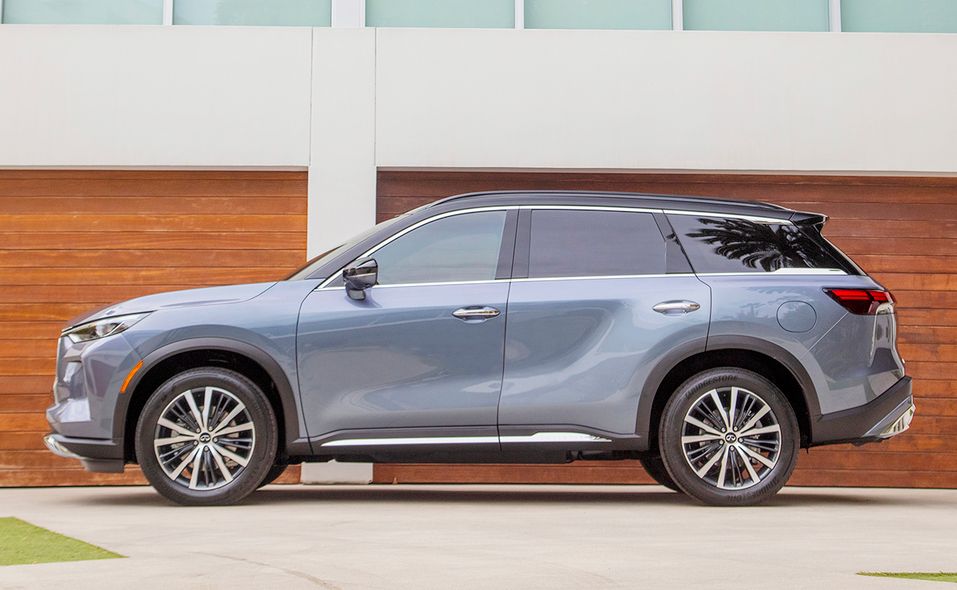 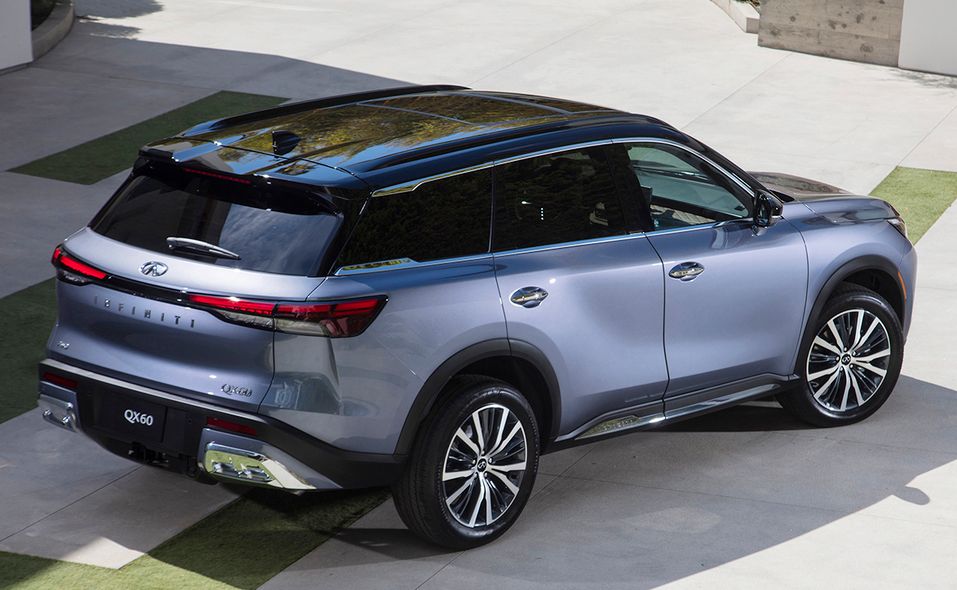 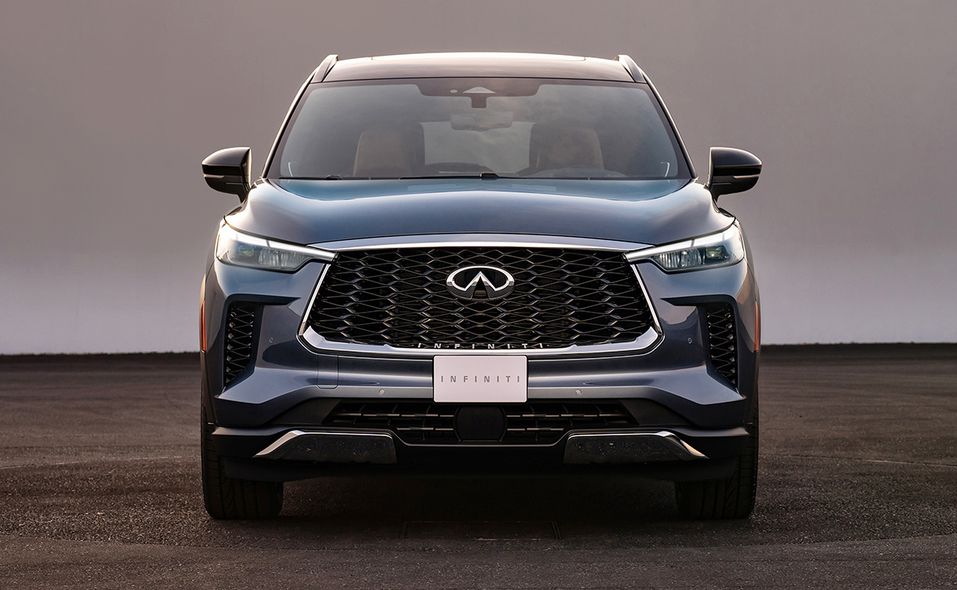 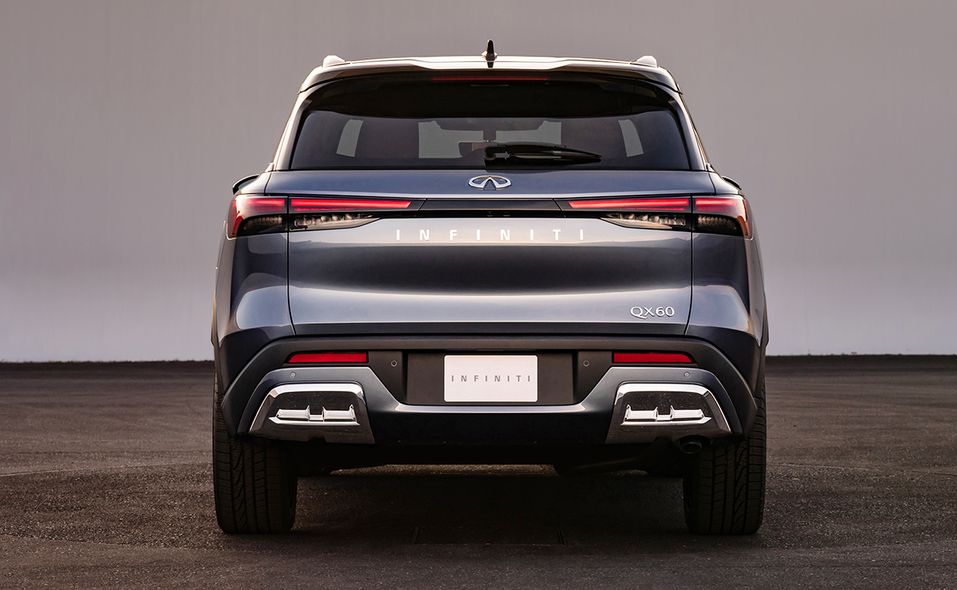 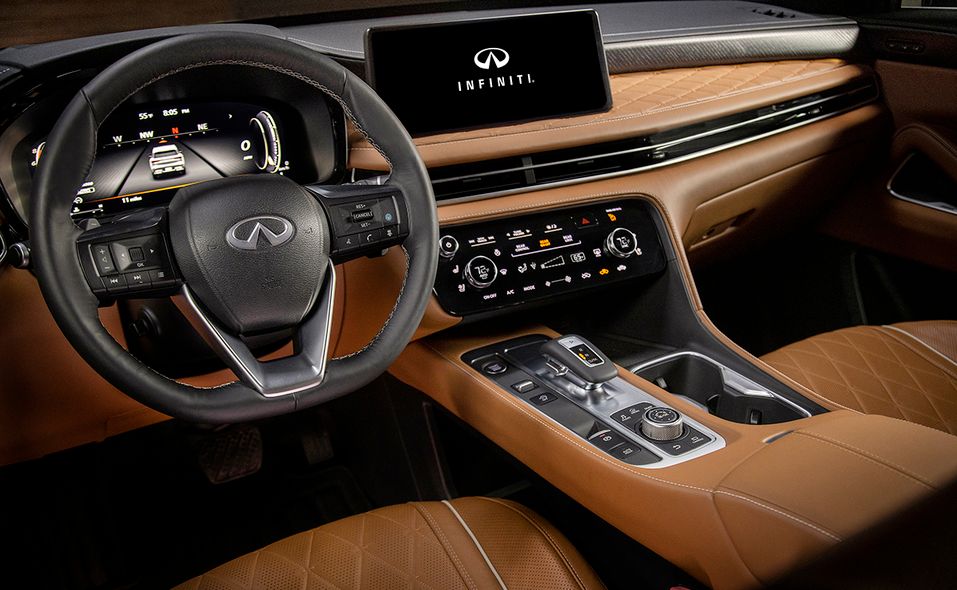 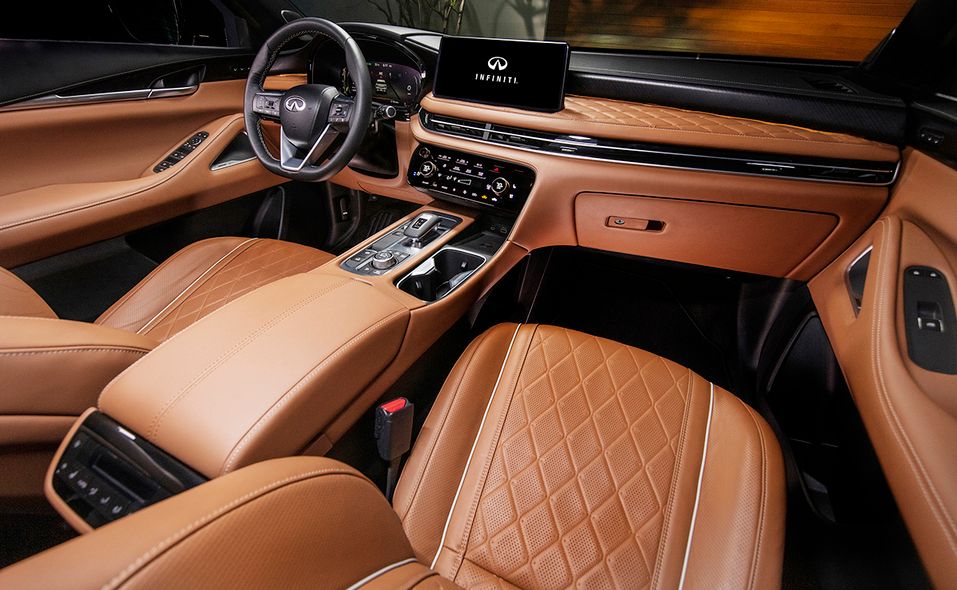 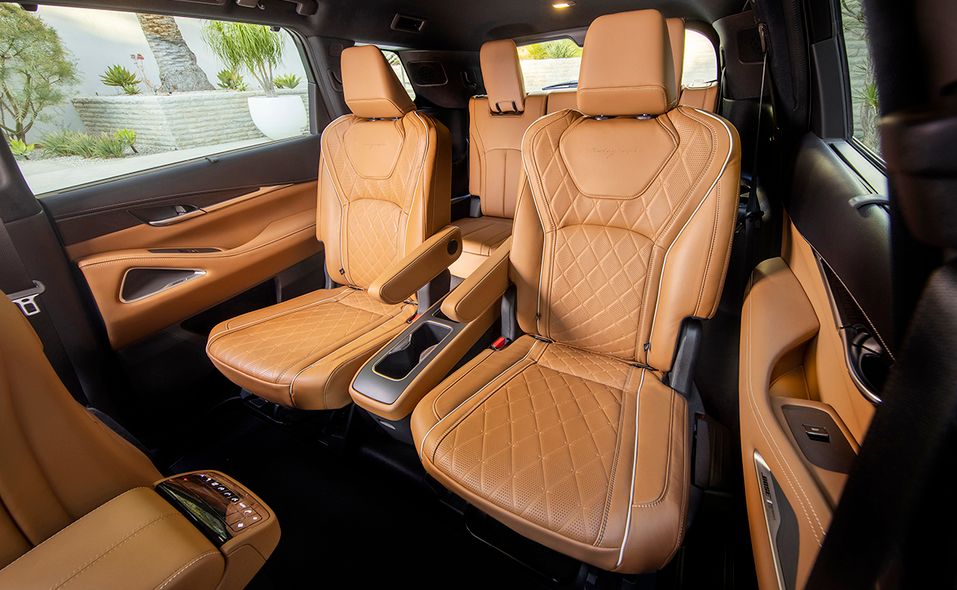 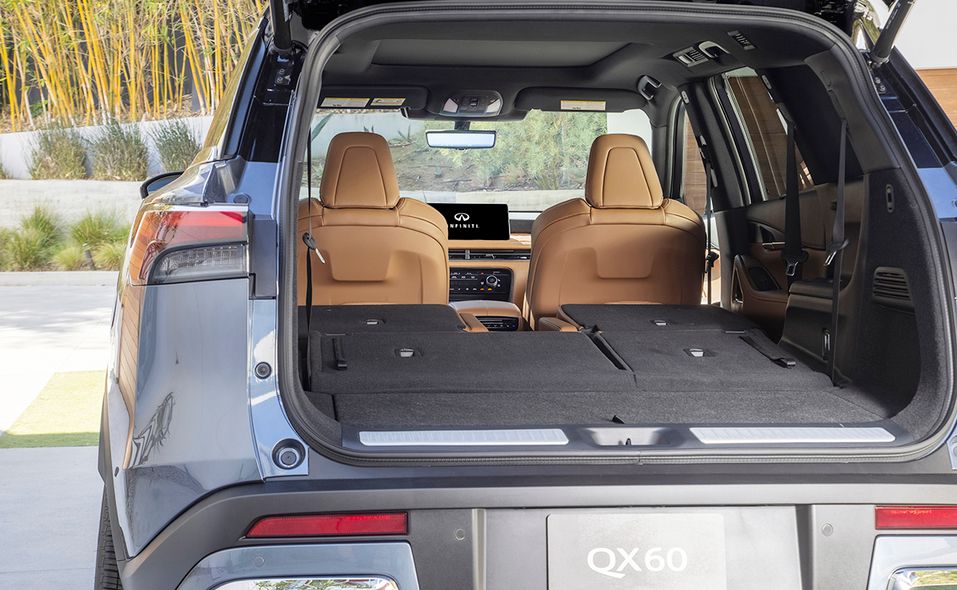 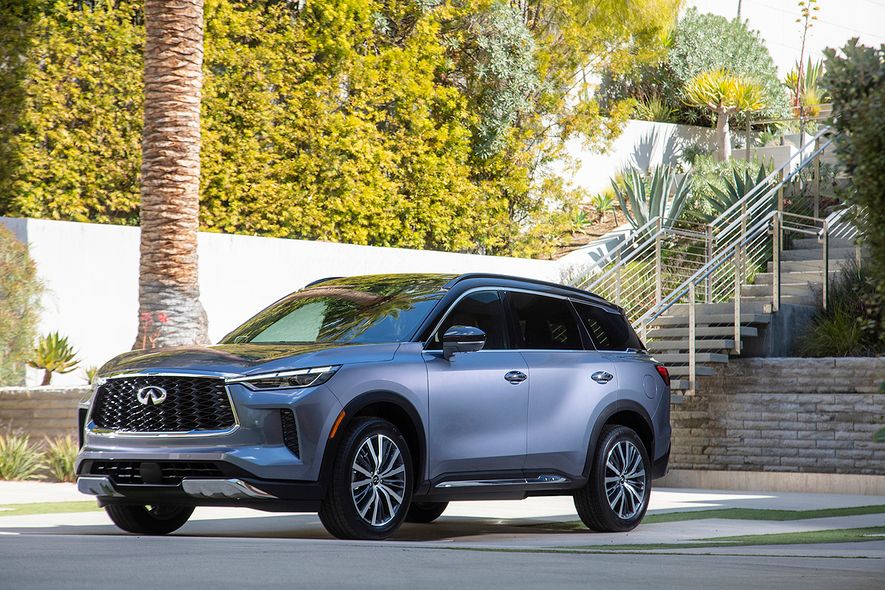