In a world gone gaga for EVs, the redesigned coupe is a no-excuses gasoline-burning 400-hp speedster built for a brand struggling to reignite excitement.

August 22, 2021 12:00 AM
Hans Greimel
Print
AUTOMOTIVE NEWS ILLUSTRATION
Retro outside and high-tech inside, the Z is part homage to the past, part signal of things to come.

TOKYO — Not too long ago, Nissan was wrestling with what to do about its iconic Z car.

Sports cars are a shrinking niche in a market conquered by crossovers. Then there is the industry's new obsession with all things electric, and Nissan's considerable financial woes don't help either.

Splurging to invest in a rubber-peeling internal-combustion car — especially one that seats just two people — seemed a bit out of sync, if not outright overindulgent.

But instead of hitting the brakes, Nissan Motor Co. has doubled down to make the seventh-generation Z car the most powerful in the line's history, a fire-breathing, twin-turbo 3.0-liter V-6 speedster that delivers 400 hp and plenty of old-school street cred for petrol-head purists.

For Nissan, which has been struggling to reignite brand excitement amid waves of red ink and falling sales, keeping the Z alive was an almost spiritual imperative for rebooting the entire company.

Gupta: “How often can you describe a car with one letter?”

"Z is not a car. It's a culture," COO Ashwani Gupta told Automotive News ahead of last week's reveal of the next-generation sports coupe at an event in Brooklyn, N.Y. "We have enough cars in our lineup to do business. Z is a culture which connects Nissan's past, present and future."

But deciding on the right formula wasn't easy.

As recently as 2018, Nissan executives were still pondering how to keep the Z car fresh and innovative in an industry under siege by change.

Top-end sports car makers, including Ferrari, Lamborghini, Jaguar, Lotus and Porsche, have been stepping up plans to electrify their lineups. And even Nissan, a one-time EV leader, has pledged to have electrified offerings for all new or redesigned vehicles by the early 2030s.

Sporty EV concepts coming from Nissan, such as the ESFLOW from 2011, fueled speculation that an electrified Z might be in the cards. But if that happens at all, it appears to be kicked into the next decade.

Sticking with piston power for now helps Nissan get to market fast with a piece of eye candy that is pitched as a heritage car "built for enthusiasts, by enthusiasts."

Sticking with gasoline also helps Nissan keep the Z true to its roots as an affordable fun car — without the extra cost of bolting on an electric motor and pricey battery.

The company hasn't talked pricing yet, but the sticker is expected to start around $40,000. And enthusiastic dealers, eager for some new offerings, say there will be plenty of interest.

"Electrification is the future that everyone is talking about. But today, in 2021 and 2022, there is still a great thirst for internal combustion cars," said Bill Wallace, CEO of Wallace Auto Group, which operates a Nissan store in Stuart, Fla. "It doesn't concern me at all that it is not electric. It will bring more traffic into the store. We could sell every unit we get." 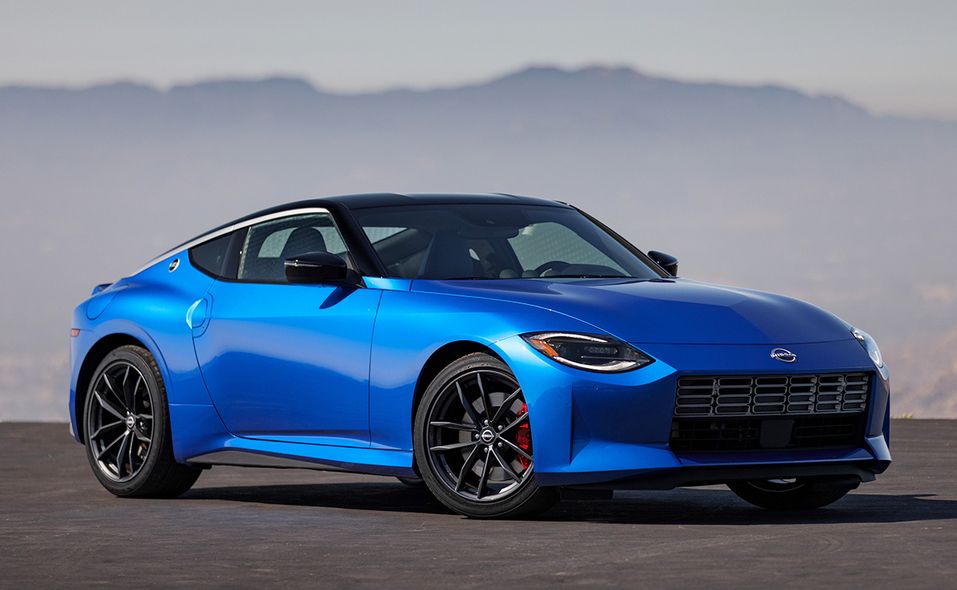 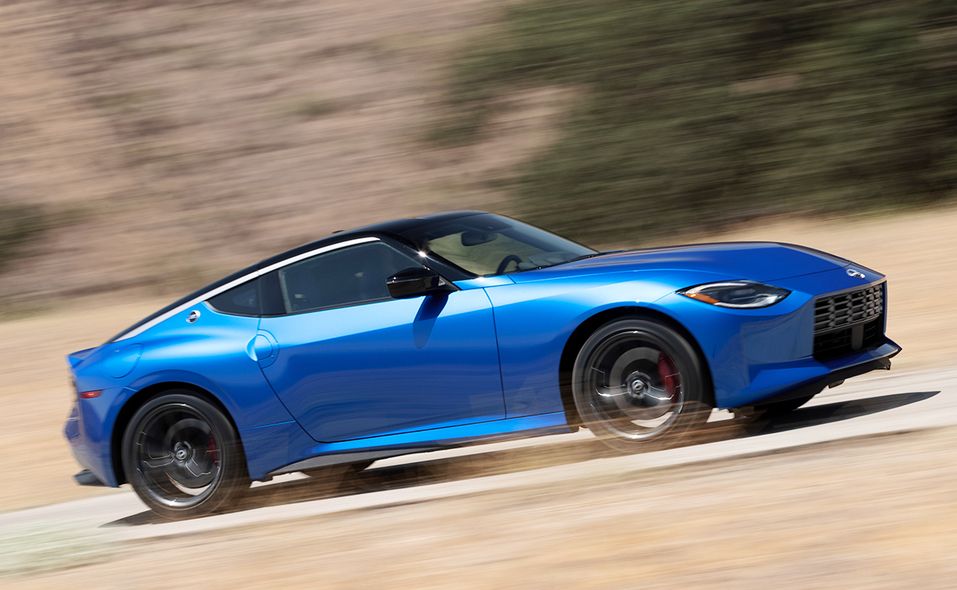 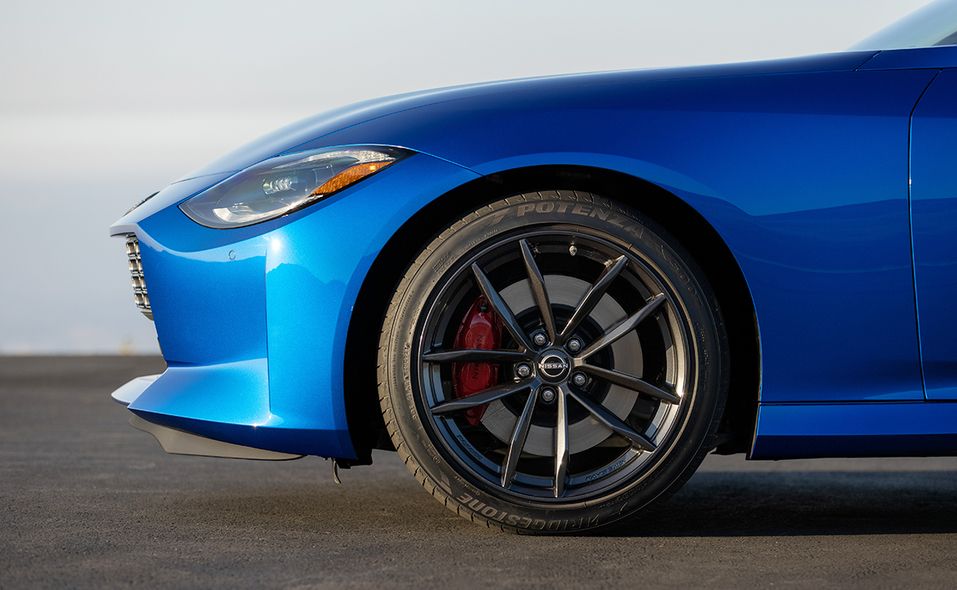 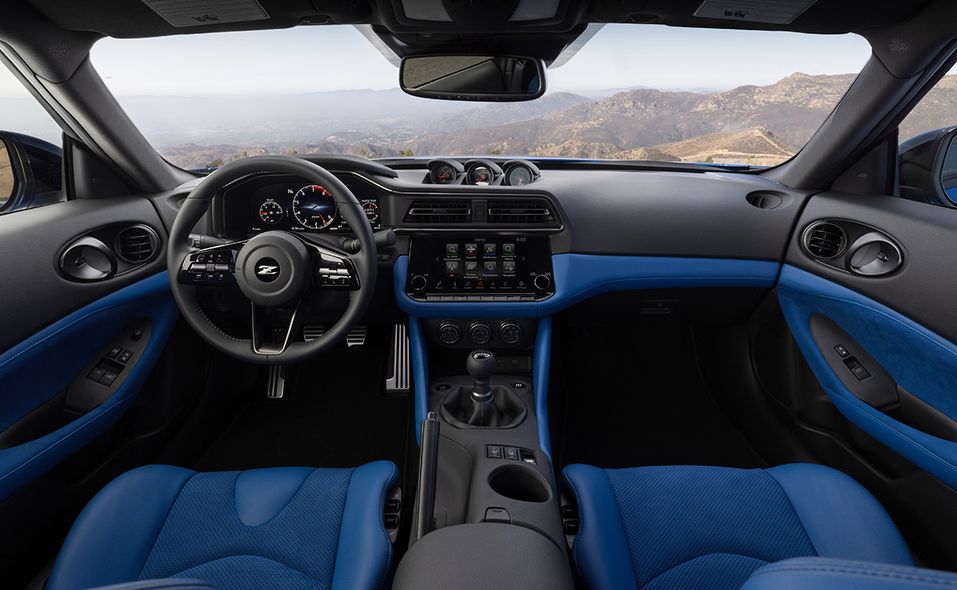 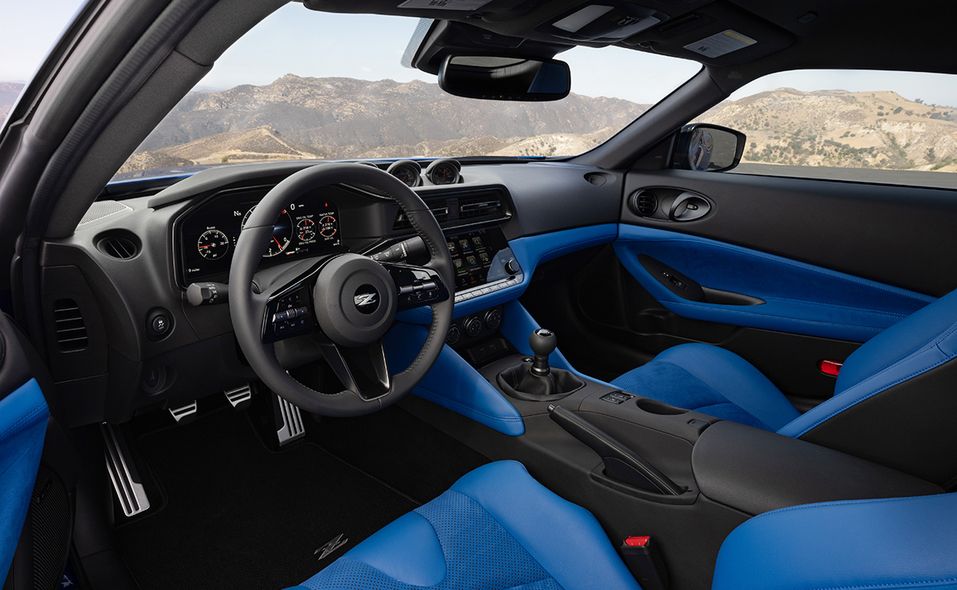 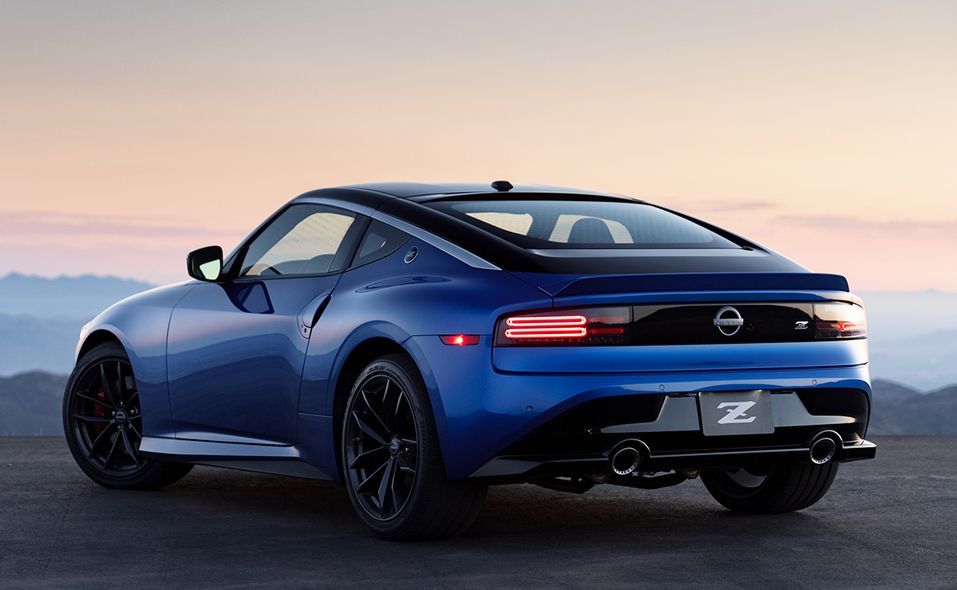 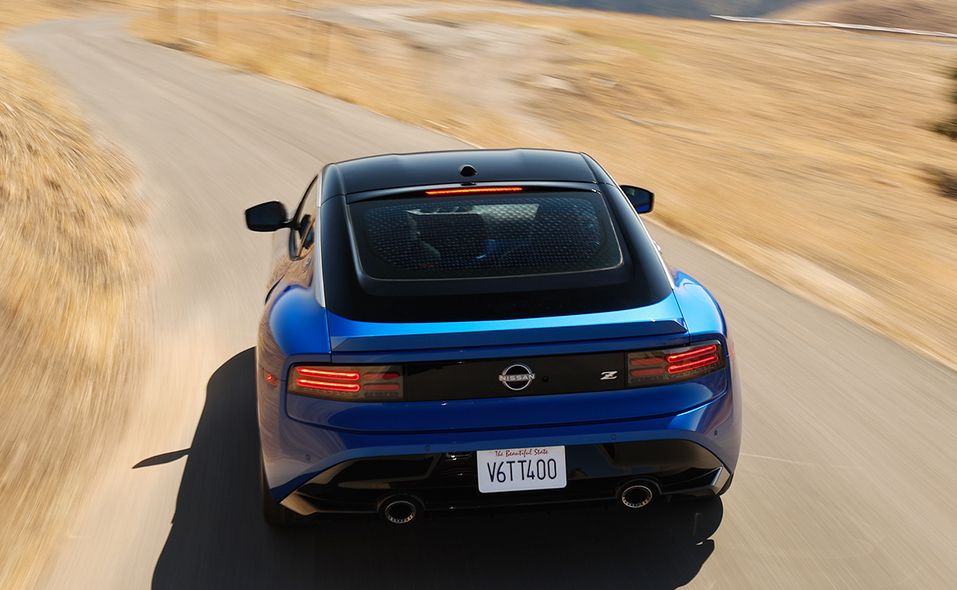 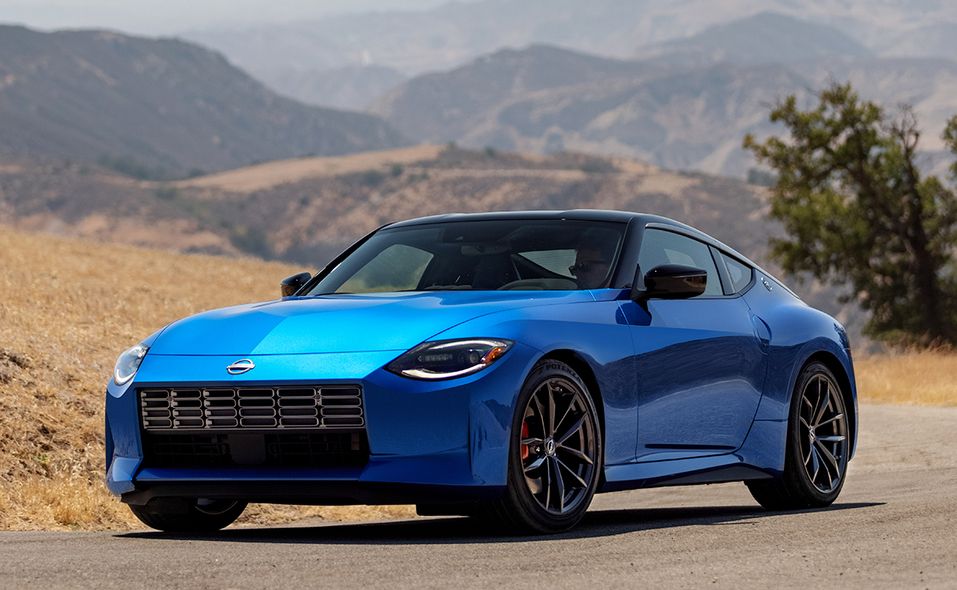 Nissan is hardly alone in banking on the sporty coupe niche. Toyota and Subaru, for example, are launching a second generation of their jointly developed everyman's sports coupe, the Toyota GR 86 and Subaru BRZ. Toyota's version, which arrives in November, will start under $30,000.

Automakers say these cars have a special appeal with middle-age men. And while that segment is not especially high volume, it does have a loyal fan base of well-heeled customers.

The Z arrives in the U.S. next spring, with global sales focused mainly on the U.S. and Japan.

"One and a half years before, we were struggling with how to make the Z," Gupta said. "I think it's time for us to celebrate the great moment of having an iconic car, despite all the challenges we had.

"How often can you describe a car with one letter?" he said.

Indeed, Nissan is dumping the car's numeric nomenclature. The long-awaited redesign — the first since 2009 — will be rechristened simply as "Z." That squashes earlier speculation that the update of the the current 370Z might be called the 400Z, to point out its pumped-up horsepower and performance.

The new Z gains 68 hp and a 30 percent increase in torque. It is also quicker off the line, eking out a 15 percent improvement in the car's 0 to 60 mph time. The standard setup mates the engine to a six-speed manual transmission. A nine-speed automatic is also available, a step up from the outgoing seven-speed.

Engineers tweaked the front double-wishbone suspension and the rear multilink aluminum setup to improve ride comfort and stability. The redesign uses the same chassis as the outgoing 370Z, but 80 percent of the package is all new, including the fresh powertrain and suspension.

Retro-styled on the outside, high-tech on the inside, Nissan's latest Z car is partly an homage to the car's origins and partly a signal of Nissan's new direction.

Among the Z's throwbacks to the first-generation 240Z, which debuted some five decades ago under the Datsun brand in the U.S., is the signature silhouette — a long hood, pointy nose and short, sloping rear deck.

Some of the 21st-century accoutrements include LED headlamps and a 12.3-inch digital meter display. Then there is the plethora of modern upgrades that include intelligent cruise control, an auto-dimming rearview mirror, a rearview monitor, USB ports and front and rear sonar sensors.

Nissan did not release a curb weight for the upcoming car. But the redesign is about 5 inches longer than the current 370Z, despite keeping the same width and height.