Chris Lenckosz will sit in his office inside his locked Nissan showroom in Colorado and watch people drive up to the store.

Customers pull on the door, then return to their cars. And then Lenckosz hears the dealership phone ring. They're seeking extensions on their temporary license plate tags, something Colorado dealers are authorized to issue.

Except showrooms are closed right now, under state orders aimed at slowing transmission of the novel coronavirus. Retailers can sell remotely in Colorado, but the arrangement raises questions about what happens once the customer has taken the keys to a new car — namely, the processing of permanent titles and vehicle registrations.

Cox Automotive's Dealertrack is monitoring changes to operations at departments of motor vehicles and equivalent offices while states are under stay-at-home orders or have closed nonessential businesses. A vast majority of states have imposed some restriction on public access to these offices, according to Dealertrack's list, which can be found at: resources.dealertrack.com/registration-title/covid-19-update-state-by-state-dmv-operating-status.

In addition to closing physical showrooms in many states across the country, stay-home orders in some places also have closed the government offices that process vehicle-purchase paperwork. The impact of these closures varies by state, and in some case by county. More than 40 states have implemented restrictions on public access to departments of motor vehicles and equivalent offices, according to Cox Automotive's Dealertrack unit, which is tracking the changes.

In some states, particularly those with electronic systems, title and registration work generally has proceeded. In others, turnaround time could be longer.

Some dealers and state dealer association leaders who spoke to Automotive News said the back-end work hasn't yet become a major problem, though it has the potential to slow dealership cash flow if it takes longer than usual for dealers to get a clear title to a lender. A number of states have extended the duration of temporary vehicle registrations, allowing buyers to drive their new cars without running afoul of the law.

New Jersey Motor Vehicle Commission offices are closed, though its headquarters and online services have continued operations, according to Dealertrack. Courier services in the state that picked up and dropped off paperwork at dealerships temporarily pulled drivers off the road as a health precaution, leading to delays, said Jim Appleton, president of the New Jersey Coalition of Automotive Retailers.

The dealer association processes more than 1 million title and registration deals annually, he said, and verifies documents prior to deals being registered with the state. In normal times, it can turn around a single deal in three to six days, he added.

The association stopped accepting new transactions while the courier service was offline but resumed last week as couriers ramped up limited operations.

Tim Jackson, president of the Colorado Automobile Dealers Association, said one concern is the ability to perfect liens — the process of establishing a security interest — within 30 days as required under federal bankruptcy law. That provision gives dealerships protection from liability if a customer files for bankruptcy and the lender does not have a secured interest in the vehicle, he said.

In Colorado, county offices process titles and registrations, but some are closed while others are operating on limited schedules, he said. Jackson said his association advised dealers to ship title applications to the proper county office and retain mailing receipts.

"It doesn't happen often," Jackson said of the bankruptcy issue, "but under these circumstances that we're operating under now, this could be a really big deal."

Dealership cash-flow issues could be more immediate on the used-vehicle side if processing delays become a problem, Jackson and Appleton said. And while lenders normally pay on new-vehicle deals before titles are perfected, Appleton said via text message, "as this drags out, will they continue to do so?" 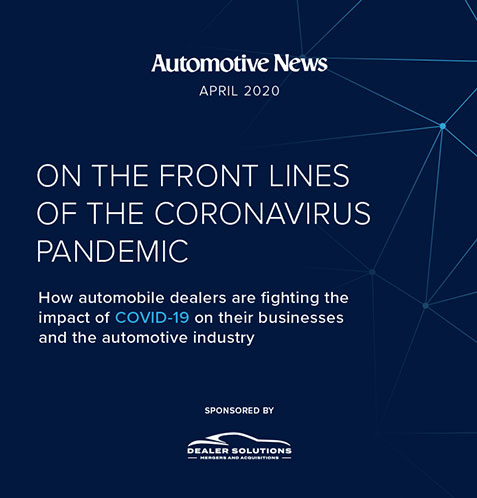 HOW DEALERS ARE FIGHTING THE IMPACT OF COVID-19: This special report from the Automotive News Data Center reveals how auto dealers in the U.S. and Canada are responding to the coronavirus, what they are doing to drive sales and service, how they feel about government action and their forecasts for return to business as usual.
Download the special report >
Electronic systems continue

The Michigan Automobile Dealers Association issued guidance on title and registration processing April 9, noting that regardless of whether that work happens electronically or at a branch office, "there will be a delay in the title being mailed to the end user."

Jake Rollow, a spokesman for the Michigan Department of State, said via email that dealers are encouraged to enroll in an electronic filing system. Those who don't can make in-person appointments on an emergency basis for sales "that support critical infrastructure work that sustains life or supports the sustainment of life."

"What can't be sent over the phone right now or electronically is just going to take a little longer," she said.

Jackie Charniga contributed to this report.

Once again, Nissan turns to the Z for a dose of healing

Once again, Nissan turns to the Z for a dose of healing
Inventory at lowest since 2011