Alan Lloyd, former chairman of the California Air Resources Board, reflects on GM's electric vehicle efforts and the controversial delay of zero-emission-vehicle targets.

A painting on the wall behind Alan Lloyd's desk depicts slender rays of sunlight shining through a darkened sky upon a sailboat being battered by turbulent seas.

The title of the painting is Perseverance. It's perhaps fitting because Lloyd needed much of that to navigate the contentious nature of his job as chairman of the California Air Resources Board from 1999 to 2005.

He began in the role the same year General Motors ended production of its EV1 electric vehicle. The car's demise upset environmentalists, and the regulatory battles that ensued over zero-emission vehicle mandates would shape Lloyd's tenure.

Ultimately, CARB relaxed mandates that might have otherwise sped sales of emissions-free vehicles. Instead, automakers would be allowed to offer a variety of alternative powertrains to earn ZEV credits. Compromises with the manufacturers led to an influx of hybrids and other vehicles that still emitted pollution, but lower amounts of it. For Lloyd, now a senior research fellow at the Energy Institute, a think tank within the University of Texas, that was a worthy compromise.

Lloyd: Bore the brunt of ire

"Our job was not to be a technology-forcing agency; we had to be worried about air quality," he said. "So does it make sense to put a few thousand zero-emission vehicles out there? Or rather tens of thousands of very-low emitting vehicles?"

Today, there has been tangible progress that makes the mass proliferation of EVs tenable. Teslas are already commonplace on California highways, and nearly 100 EV models are expected to be offered for sale in the U.S. by the end of 2024 — exactly the sort of electrified future Californians envisioned more than 30 years ago.

In 1990, the creation of a GM-led electric concept called the Impact — it would later become the EV1 — buoyed hopes that electric vehicles could be a reality. Environmentalists believed that if deployed widely, EVs could diminish the brown cloud of smog that hung over greater Los Angeles. With the existence of the Impact in mind, CARB quickly passed the nation's first mandates requiring certain automakers to sell increasing numbers of ZEVs.

Other automakers scrambled to address those rules, with the likes of Toyota building electric RAV4s and Ford converting Ranger pickups to electric powertrains, both in low volumes. But none had an answer like GM and the EV1. However, when other states sought to follow the mandates, GM quickly determined the car's battery performance would deteriorate in cold-weather environments, and it fought back against CARB.

In the aftermath of the EV1's short life, Lloyd's job was to preside over an ongoing fight. Had GM scuttled the EV1 so it could more persuasively argue that a market for electric vehicles didn't exist and regulations were onerous? Or were CARB's regulations truly too far ahead of the technology and marketplace, requiring a further delay in their implementation?

"Environmental groups were saying to me early on, 'Look at these surveys,' where they'd ask, 'Would you buy an electric car?' Yes. 'Would you like a zero-emission car?' Yes," he said. "But it's a different question when you say, 'OK, are you willing to pay X dollars more for that car?"

GM sued California in February 2001, seeking to undo the already-relaxed regulations that required ZEVs. In 2003, the automaker and CARB reached a compromise that again delayed the mandate and offered low-polluting powertrain options beyond electric cars.

At GM, the compromise was welcomed.

"We were never afraid of a technology-forcing aspect; we were willing to accept that and work through that," said Dennis Minano, GM's vice president of public policy and chief environmental officer at the time. "This was creating a whole segment. There has to be a rational aspect to do all this. ... I mean, we can't even chart a path to get there." 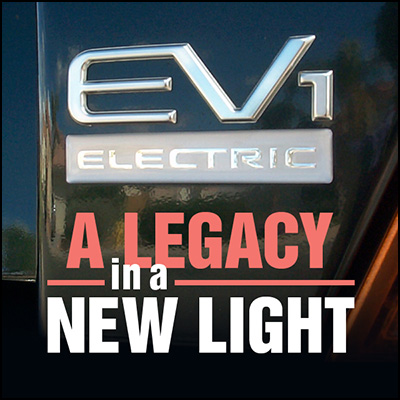 FIRST IN CHARGE: 25 years ago, GM rolled out the EV1, a triumph of electrification that ended in a crushing blow. But the car planted the seed for the industry embrace of EVs now. Read how those who lived the saga remember it.
EV1: A Legacy in a New Light >
‘Very tense meetings'

For environmentalists, the compromise was more a capitulation by CARB. Lloyd bore the brunt of their ire and was portrayed as the bureaucratic villain in the 2006 documentary "Who Killed The Electric Car?" While much of his role in the spotlight roused such public scrutiny and derision, there was a behind-the-scenes practicality that fewer people saw.

Part of the job entailed extensive visits with global automakers. After a while, he could look beyond their public posturing and decipher the true state of their powertrain innovations. Some automakers were straightforward. Some, more secretive.

"I can remember having some very tense meetings with GM," Lloyd said. "But Ford and GM were both generally pretty good. I think Ford was a bit more forthcoming than GM."

Considering how the ZEV mandate started in 1990, with CARB enthusiastic about the prospect of the Impact and then the EV1, Lloyd understood that reluctance.

"That's the sort of thing where I know the industry is very careful what they show regulators because the next thing they know, they're required," he said, "which most of the time, that's true."