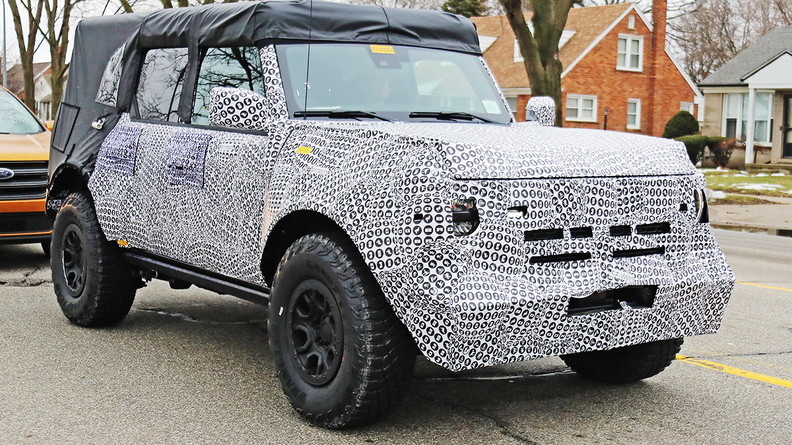 The latest off-road prototype of Ford's forthcoming Bronco features wider-flared fenders, a raised suspension and Goodyear Wrangler tires similar to those used on F-150 Raptor variants. It's unclear if Ford would offer a Bronco Raptor, but the test vehicle exemplifies Ford's desire to seriously challenge Jeep in the off-road market.

Jeep is readying a three-row SUV based on a prototype that uses a stretched Grand Cherokee. The exhaust has been rerouted to make room for an external spare tire, seen mounted in the middle of the three-row model's undercarriage. The spare-tire move freed up space for the third row of seats.

The Genesis GV80, with an optional third row, will be available with two turbocharged gasoline engines in the U.S., Genesis said. The G70 sedan is offered with a base turbo four-cylinder or optional turbo six-cylinder engine, and those are likely choices for the GV80, providing better fuel economy in the smaller motor and performance in the bigger one. Standout attributes of the new crossover, according to Genesis, include an electronically controlled suspension with road preview from a front-mounted camera, active road noise cancellation, available 22-inch wheels and a 14.5-inch infotainment screen.

The 2021 Yukon lineup is headlined by an all-new upscale Denali and the first-ever Yukon AT4, taking Yukon into the premium off-road space. Interior design across the Yukon lineup is all new. Among other refinements is an Air Ride Adaptive Suspension, which delivers ride comfort and allows drivers to raise the body up to 2 inches for additional ground clearance when traveling off-road and when four-wheel drive is engaged. The standard Yukon’s maximum cargo space has been stretched 30 percent to 28.2 cubic feet, with 41 percent more legroom and 67 percent more cargo room behind the third row. The Yukon XL gains 19 percent more maximum cargo space. It has 4.6 percent more cargo room behind the third row and 6.4 percent more legroom in the third row. A 5.3-liter V-8 engine is standard on the Yukon, but buyers can opt for a new version of the 6.2-liter V-8 or a 3-liter inline-six turbo diesel engine. Each engine has a 10-speed automatic transmission with an electronic precision-shift, push-button gear selector.