Nearly two years after a fatal crash involving an Uber self- driving test vehicle, prosecutors are still deciding whether they'll bring charges against the human safety driver who was behind the wheel.

A spokesperson for the Maricopa County Attorney's Office said last week the case remains under review. A decision on whether to charge Rafaela Vasquez could come in a matter of weeks.

Vasquez was behind the wheel of the Volvo XC90 on the night of March 18, 2018, when the vehicle, operating in autonomous mode, struck and killed a pedestrian in Tempe, Ariz.

Instead of watching the road, an investigation found Vasquez had been watching an episode of the "The Voice" on a company cellphone. Cameras mounted inside the test vehicle captured the wrenching moment when Vasquez looked up and realized a collision was imminent.

The resulting impact killed Elaine Herzberg, 49. She became the first person ever killed in a crash involving self-driving technology. The landmark incident rattled a fledgling industry which had, to that point, basked in the broad promise of a safer transportation future without significant skepticism.

But the crash was not merely about a malfunctioning new technology that misclassified Herzberg, who walked a bike across North Mill Avenue, as an unknown object, then as a vehicle and, finally, as a bicycle — all with varying expectations of her expected trajectory. 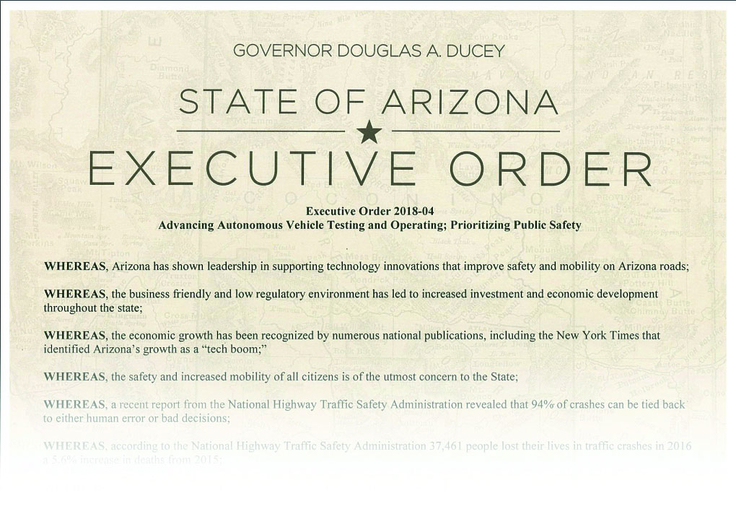 December 2016: California regulators revoke registrations for Uber's self-driving vehicles after a standoff over the company's failure to get permits. As a result, Uber relocates its California testing to the Phoenix area.

March 18, 2018: One of Uber's self-driving test vehicles, a Volvo XC90, strikes and kills a pedestrian walking a bike across North Mill Avenue in Tempe, Ariz.

March 26, 2018: Ducey suspends Uber's right to test self-driving tech in Arizona. In a letter to the company, he says the crash was an "unquestionable failure" to comply with an expectation the cars would be safe.

March 2019: Authorities with the Yavapai County Attorney's Office announce Uber will not face criminal charges related to the crash.

October 2019: Uber says a board comprising safety-minded outsiders will keep tabs on its self-driving efforts and make recommendations on how to ensure safe operations.

November 2019: The National Transportation Safety Board releases its final report on the Tempe incident, citing the human safety driver's distraction because of "automation complacency" as a probable cause of the crash.

Nor was it simply about Uber, an aggressive Silicon Valley company that had disabled two safety backups — an internal fail-safe called Reflex and a factory-installed Volvo driver-assist system called City Safety — in its push to develop fleets of robotaxis. Either system may have mitigated the impact or prevented Herzberg's death.

It was a crash in which the car-friendly infrastructure of the Phoenix area left the nearest crosswalk 380 feet to the north of where natural crossing paths existed in the median from which Herzberg stepped onto the street. It was a crash possibly influenced by impairment. Herzberg tested positive for methamphetamine and marijuana use, according to the National Transportation Safety Board.

In November 2019, the NTSB determined that Vasquez's failure to monitor the road was the probable cause of the crash. Ultimately, the self-driving system in the vehicle was being tested. It required a vigilant driver. But the independent federal agency found the crash occurred amid a lax and inadequate safety culture at Uber detailed in a 78-page report released last year.

Those shortcomings were not enough for Uber itself to face criminal charges. In March 2019, the Yavapai County Attorney's Office determined there was "no basis for criminal liability for the Uber corporation" arising from the crash.

Shortly after the crash, the Maricopa County Attorney's Office referred the case to its northern neighbor because of a potential conflict of interest. Maricopa County officials had previously partnered with Uber on a public-service campaign that encouraged people not to drink and drive.

As for Uber, its self-driving test program has come full circle. Last month, Uber received a permit to deploy its Volvo XC90 test vehicles from the California Department of Motor Vehicles. As of last week, two were operating on the streets of San Francisco. "We look forward to scaling up our efforts in the months ahead and learning from the difficult but informative road conditions that the Bay Area has to offer," an Uber spokesperson said.

REUTERS
NTSB inspectors examine the self-driving Uber vehicle involved in a 2018 crash in Tempe, Ariz., that killed a pedestrian.

It was in California where the circumstances that culminated in the crash began. In December 2016, the California DMV revoked the registrations of Uber's test vehicles after it began testing on public roads without a permit. A standoff ensued. Uber shifted its testing to Arizona. As the wrangling between California regulators and Uber executives took place, Arizona Gov. Douglas Ducey courted Uber. "This is about economic development, but it's also about changing the way we live and work," he said. "Arizona is proud to be open for business. California may not want you, but we do."

On March 1, 2018, he signed an executive order that further established guidelines for testing, but one that also instructed state officials to "eliminate unnecessary regulations and hurdles to the new technology." Seventeen days later came the Tempe crash, one with ripple effects that continue to reverberate.