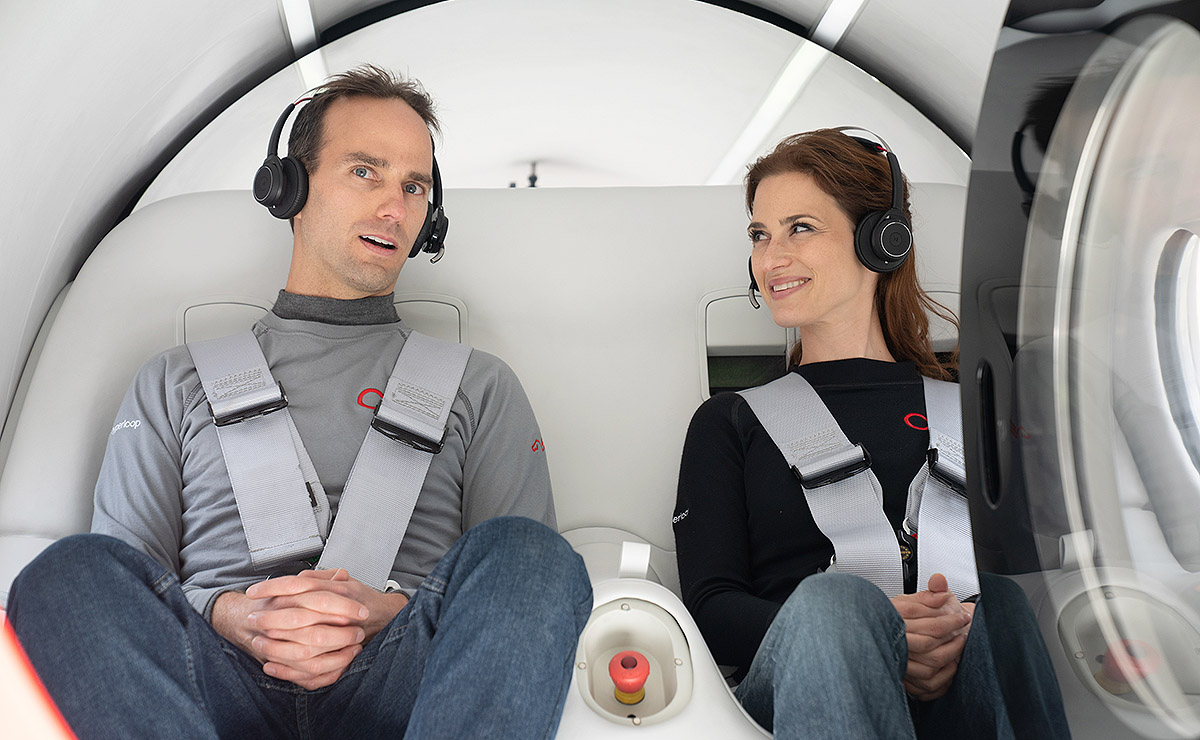 Remember hyperloops? The idea is to place passengers in pods and, using electromagnetic levitation, whisk the pods through giant tubes in a near vacuum at more than 600 mph.

While it may still sound like science fiction, the concept, popularized by Tesla CEO Elon Musk, has been moving closer to reality. The U.S. government is even working out how to regulate it.

One of the leading companies striving to commercialize high-speed tube travel, billionaire Richard Branson's Virgin Hyperloop, passed a major milestone Sunday. It completed its first human test run, albeit in a scaled-back version.

The test was on Virgin Hyperloop's 0.3-mile DevLoop test site in Las Vegas. The two passengers were Chief Technology Officer Josh Giegel and Director of Passenger Experience Sara Luchian. A launch video shows the pair grinning broadly during the short ride, which hit a top speed of 107 mph, a fraction of the speed the production version is expected to reach.

The company completed more than 400 unoccupied tests before the pod made its human transport debut.

"Hyperloop is about so much more than the technology. It's about what it enables," Luchian said in a statement. "To me, the passenger experience ties it all together. And what better way to design the future than to actually experience it firsthand?"

Companies such as Virgin Hyperloop and Hyperloop Transportation Technologies, which is also based in Los Angeles, tout high-speed tube travel as the first new mode of mass transportation in more than 100 years. In July the Department of Transportation published guidance on a clear regulatory framework for hyperloops in the U.S.

"When we started in a garage over six years ago, the goal was simple – to transform the way people move," Giegel said in the statement. "Today, we took one giant leap toward that ultimate dream, not only for me, but for all of us who are looking towards a moonshot right here on Earth."

The maiden voyage with passengers on board was in a two-seater pod called the XP-2. The production vehicle will seat up to 28 passengers.

Virgin Hyperloop announced in October that the company picked West Virginia to host a $500 million certification center and test track. Construction is planned to begin in 2022.

"I had the true pleasure of seeing history made before my very eyes," said the chairman of Virgin Hyperloop, Sultan Ahmed Bin Sulayem.

Uber, Lyft win in California just the beginning After a two-year legal battle in California, ride-hailing giants Uber Technologies and Lyft, along with other major gig-economy players in the state, will not be forced to reclassify their drivers as employees. This does not mean the fight is over. Some expect drivers to continue to advocate for further rights and benefits from these companies. Others anticipate that last week's passage of Proposition 22 could open doors for more companies to lobby for initiatives, as Uber and Lyft did, in other states that are weighing gig labor laws. The ballot measure — which Uber, Lyft, DoorDash and others bankrolled with more than $200 million — allows the companies to continue to classify drivers as contract workers. The companies say this model provides workers with flexible hours and independence.

BMW iX debuts BMW is reloading and forging back onto the EV battlefield with the iX, a full-electric utility vehicle that will become the automaker's new technology flagship. The 500-hp iX, unwrapped Wednesday, is powered by two electric motors that drive all four wheels. It is due to go on sale in Europe at the end of 2021 and in the U.S. in early 2022. It is projected to have a driving range of more than 300 miles, according to EPA test procedures.

Cruise partners with Walmart on self-driving delivery pilot in Arizona.

Ford is investing $100 million, adding 150 jobs in Kansas City for the E-Transit van.

Rivian CEO RJ Scaringe was a guest on Automotive News' "Daily Drive" podcast Tuesday. Scaringe for the first time addressed how Rivian will offer service for its vehicles without a traditional dealership network.

With Biden victory, new emphasis will be placed on clean energy.

BMW CEO says he is weighing options for mobility JV with Daimler.

How Europe will become an EV battery powerhouse.