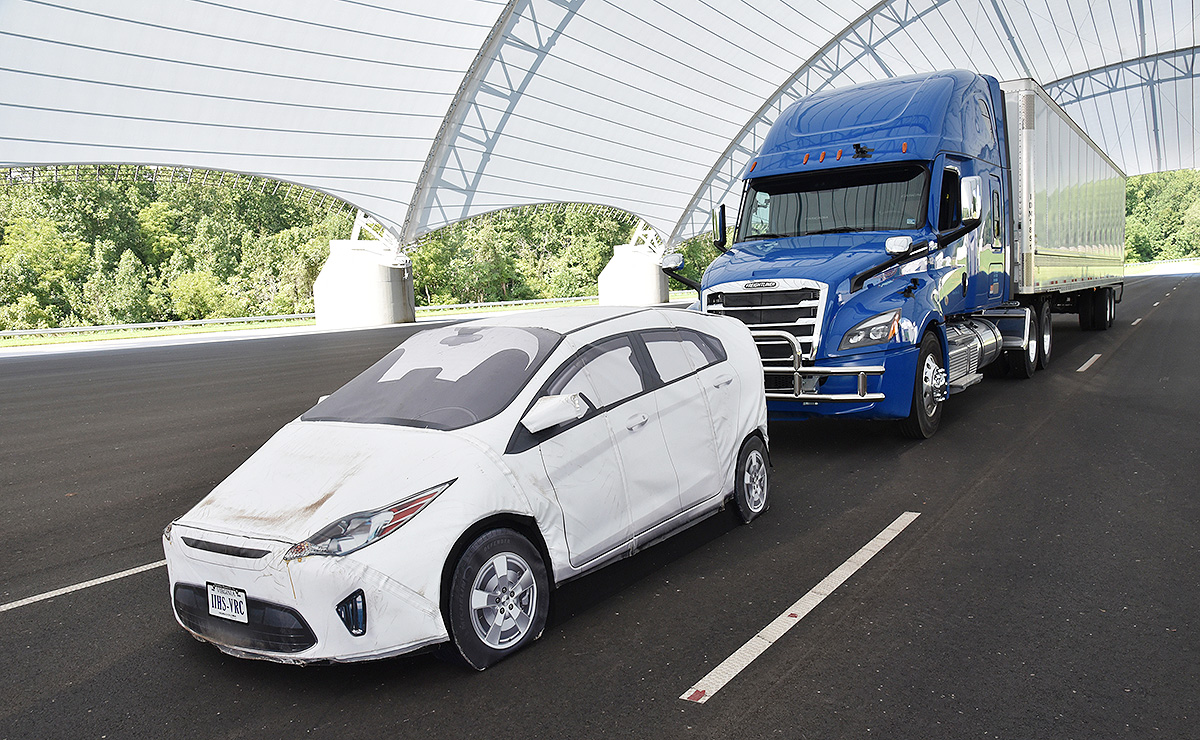 Driving home from work one night in the left lane of Interstate 94 in metro Detroit, I noticed cars had backed up from an exit ramp onto the highway.

A truck driver in the right lane didn't see the stoppage ahead. Precious seconds passed. Then, the squeal of tires and a tractor-trailer swerving into my lane. Through the stroke of good fortune, the truck missed the stopped traffic by mere feet.

But the acrid smell of locked brakes returns to my memory every time I drive past the westbound Exit 172, and the prospect of watching a passenger car get flattened by a tractor-trailer at highway speeds remains the stuff of vehicular nightmares.

A study issued this morning from the Insurance Institute for Highway Safety provides increased evidence that new technology can help prevent such scenarios from becoming reality. Equipping trucks with forward collision warning and automated emergency braking systems could eliminate more than 40 percent of rear-end collisions caused by trucks, according to the study.

The results provide "evidence that forward collision warning and AEB greatly reduce crash risk for tractor-trailers and other large trucks," Eric Teoh, director of statistical services at IIHS, said in a written statement. "That's important information for trucking companies and drivers who are weighing the costs and benefits of these options on their next vehicles."

Fatalities in truck-involved crashes have risen by about a third since 2009 and reached 4,951 killed on U.S. roads in 2018, the latest year for which federal data is available. Truck-related fatalities represented 13.5 percent of the overall traffic-death total that year.

In passenger vehicles, forward collision warning and automated emergency braking systems have a proven track record of safety benefits. Previous research from IIHS shows AEB cuts rear-end crash rates in half and rear-end crashes involving injuries by 56 percent. But there hadn't been similar research into truck-specific safety benefits until Teoh probed the question.

Another key finding: In examining collisions the systems could not prevent, he found they still mitigated crash speeds. In reviewing rear-end truck crashes in which either warnings or AEB systems had been present, Teoh found speed reductions of more than 50 percent between warnings and impact.

At least in the U.S., such systems aren't required for either passenger cars or trucks. Twenty automakers entered a voluntary agreement to make such equipment standard on their new passenger vehicles by September 2022, but no such agreement exists in trucking. It should, says David Harkey, IIHS president.

"The potential benefits are great enough that these crash avoidance systems should be standard equipment on all new large trucks," he said.

As the IIHS study emphasizes, these safety benefits are not part of a far-off future. They're tangible today.

NHTSA unveils tracking tool for voluntary AV testing pilot program NHTSA has launched an online tracking tool that allows the public to view certain information submitted by states and companies that are testing vehicles equipped with automated driving systems on U.S. roadways. U.S. safety regulators announced the online mapping tool during a virtual event Wednesday with supporters, including Rep. Fred Upton of Michigan and Sen. John Thune of South Dakota, both Republicans. The interactive tool shows information on automated vehicle testing locations, vehicle and AV technology manufacturers, vehicle type and activity, operational speed and how the vehicle is monitored for safe operation, among other data elements. Participating companies can choose what information they submit to NHTSA.

Toyota shoots for the moon Japan's biggest automaker is hard at work building a six-wheeled, pressurized, hydrogen-powered moon rover it hopes to have traversing the rocky lunar surface in a decade. The vehicle — called Lunar Cruiser as an extraterrestrial shoutout to the brand's Earth-bound Land Cruiser — will be the ultimate test of Toyota's talent in making durable, reliable vehicles. One slip-up on the moon, and there's no roadside assistance — or return — for the rover's hapless crew. More importantly, the Lunar Cruiser symbolizes Toyota President Akio Toyoda's quest to conquer new horizons as he reinvents Toyota Motor Corp. into a new mobility company. The rover will brim with the technologies of tomorrow, from its fuel cell powertrain to its autonomous driving system.

Hella is planning a sale of its driver-assistance software unit, Bloomberg reports.

Despite a delay caused by the COVID-19 pandemic, McLaren's electrified future is coming into better focus, thanks to its upcoming plug-in hybrid model.

U.S. supply of VW ID4 expected to be limited.

"No advantage" to having battery plant, Ford says.

Toyota and Honda are developing a mobile power generation system.

NHTSA to give automakers more time to comply with EV sound requirements.

May Mobility's autonomous shuttle resumed in Grand Rapids, Mich., last week and it masked up.