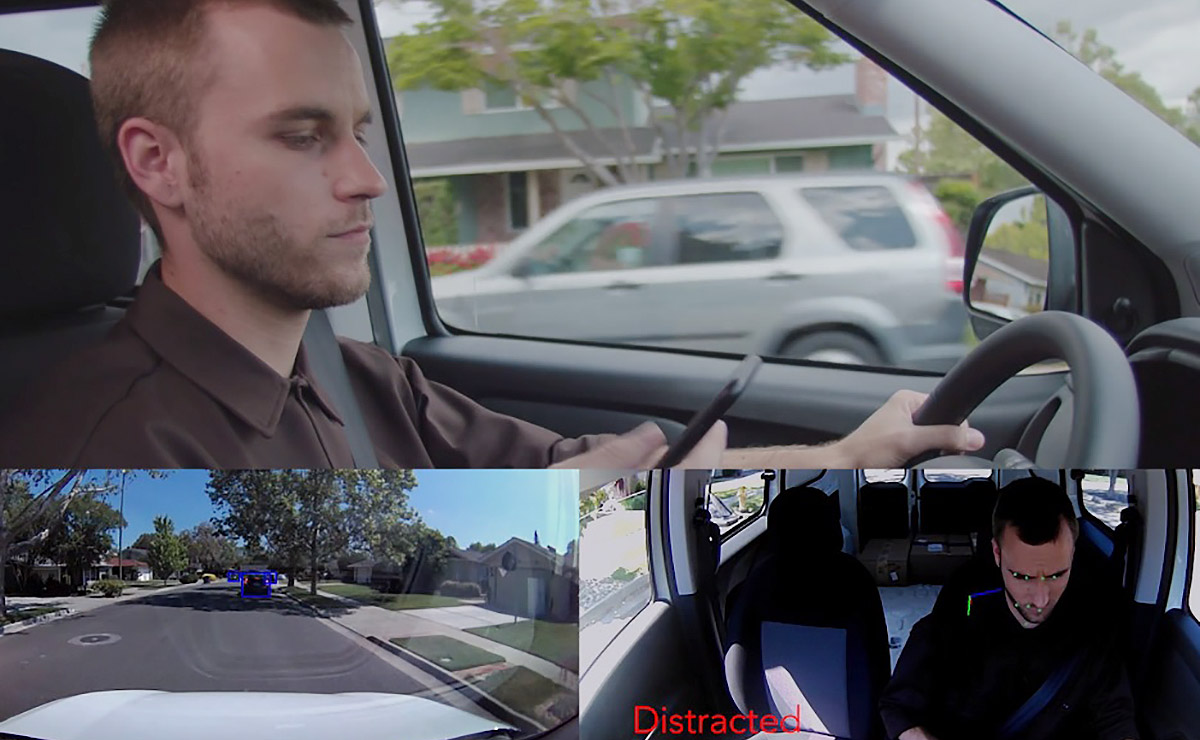 Technology often causes driver distraction. Perhaps it can help prevent it, too.

A study released this month found distraction could be reduced as much as 47 percent if drivers get real-time alerts that help refocus their attention on the road.

Nauto, an artificial-intelligence company in Palo Alto, Calif., found nearly four of five drivers in fleets across multiple industries improved driving performance with real-time alerts produced by in-cabin monitoring systems. These drivers reduced their frequency of distraction by 40 percent, duration of distraction by 43 percent and distance traveled while distracted by 47 percent.

Taken with other studies, the findings are part of a growing body of work that suggests substantial improvements in traffic safety can be made with technology available today, and that the industry does not need to wait for self-driving vehicles to hit the road en masse before deaths and injuries are reduced.

"I'm excited about the possibility of autonomous vehicles, but as we're all experiencing, we've got a while to wait," said Jennifer Haroon, COO at Nauto. "One of our goals is to use AI to enhance human drivers and change human behavior, and actually have an impact today."

Nauto's aftermarket devices have been used in commercial fleets since 2017, and its real-time safety alerts and fleet metrics are intended to help commercial operators minimize losses. The company says it has detected 21 million distracted-driving events across approximately 250 million miles traveled in vehicles containing its products.

A device roughly the size of an iPhone that's installed on the windshield contains forward-looking and cabin-facing cameras whose software identifies road hazards and driver distractions.

While a company touting the benefits of its product shouldn't necessarily be a surprise, Nauto's dataset is unlike others and offers a glimpse at the safety potential of real-time alerts.

"This is fairly unique," Haroon said. "You have to have the algorithms to detect distractions, and you have to run them at the edge."

Private companies such as Nauto and safety organizations believe the federal safety agency has underestimated the scope of the distracted-driving problem.

A study by Zendrive, whose software tracks and analyzes driver behavior, classified 8 percent of drivers as "phone addicts," who spend 28 percent of their time behind the wheel staring at their smart devices.

"Whatever the statistics, we know they're going in the wrong direction," Haroon said. "There's a lot of speculation that distracted driving is one of the reasons for that, and that's something we can address. That's what makes this exciting."

For now, the unmanned test was a one-off event, not a permanent switch in Starsky's overall testing procedure.

Self-driving milestone On the morning of June 16, a self-driving truck operated by Starsky Robotics cruised along the Florida Turnpike at 55 mph without a human aboard, a milestone in efforts to usher in an autonomous era of transportation. Starting at a rest stop along the turnpike in Okeechobee, Fla., the truck departed and drove for 9.4 miles under its own control, all while everyday motorists simultaneously used the same stretch of road -- unaware of the landmark development occurring in the adjacent lane.

BMW's plug-in plan Starting next year, all BMW plug-in hybrid models will come standard with a function that automatically switches to full-electric mode when the vehicles enter areas designated for emissions-free driving only. The function, called eDrive Zones, will use geofencing technology to recognize "green zones," established by cities for emissions-free driving, and automatically change the driving mode to EV. BMW said it hopes eDrive Zones will allow plug-in hybrids to receive the same access rights to green zones as full EVs because they will behave the same way in these areas.

An agreement announced in January between Volkswagen Group and Ford Motor Co. to cooperate on vans and pickups could be firmed up at a July 11 board meeting, with the alliance potentially extended to joint work on self-driving and electric-car technology, Bloomberg reported.

For automakers, new technologies can be "profit deserts."

BlackBerry and LG Electronics said Wednesday they have expanded a longtime partnership to "accelerate the deployment of connected and autonomous vehicle technology" for automakers and suppliers.

Some Hyundai dealerships will offer access to Lyft rides while a customer's vehicle is being serviced through CDK's Hailer service, without requiring the customer to download the Lyft app on a smartphone, the automaker said Tuesday.

Starting in August, Russian company Yandex intends to remove human safety drivers from five of its autonomous vehicles operating in the Russian city of Innopolis and conduct driverless commercial operations.

Polestar's plan is inspired by Tesla -- up to a point.

Ford remains on track to renovate the historic Michigan Central Station by the end of 2022. It will be the anchor of an urban campus for the automaker's autonomous and electrified vehicle development teams.

Velodyne Lidar has hired bankers for a stock offering, a report says.

FCA is jumping into the world of in-vehicle transactions in the second half of the year with Uconnect Market, which will enable users to order pizza, make restaurant reservations, pay for gasoline at select Shell stations and pay for parking at garages through the touch screen.

Volkswagen brand does not expect to have problems with supplies of battery cells for its new wave of full-electric cars.

Chinese electric vehicle startup Byton has tapped veteran engineers from Ford and Renault in advance of mass production of its first vehicle.

Do AVs really drive safer than humans? A patent applicant has come up with a way to find out.

Fiat-based cars are bringing North Macedonia into the EV age.