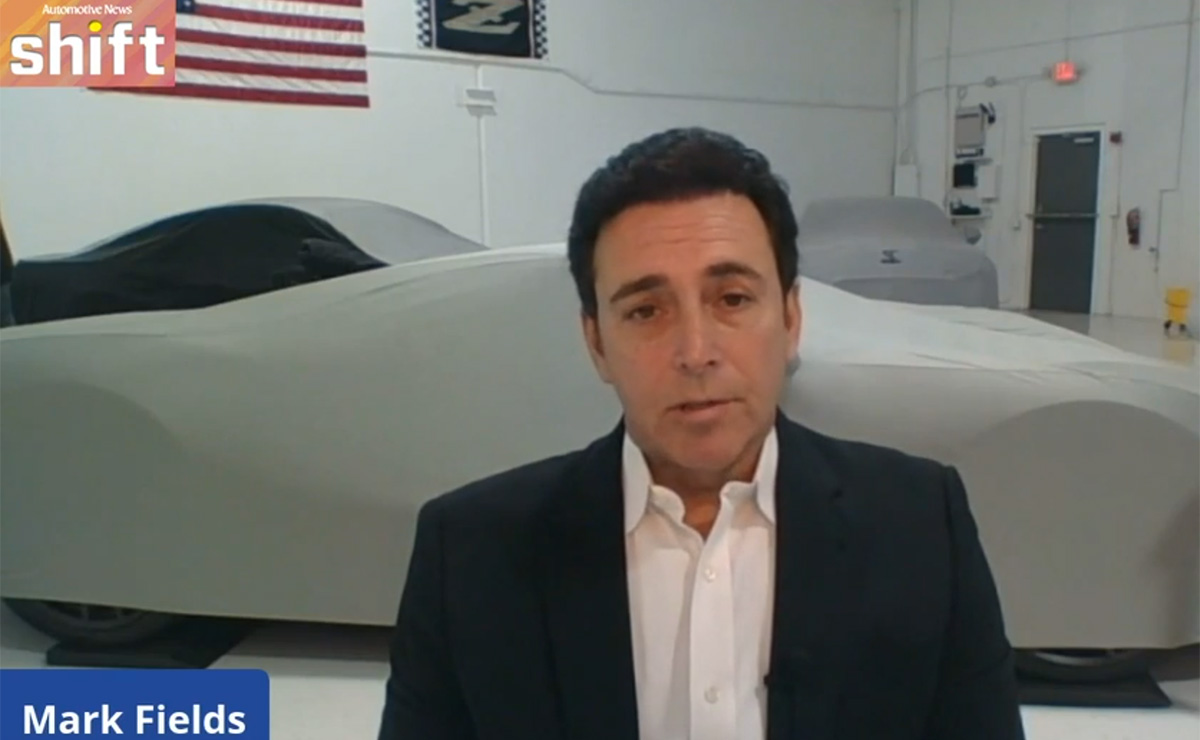 Fields, who left Ford in 2017, is a senior adviser to TPG Capital, an investment firm based in Fort Worth, Texas, and San Francisco. He spoke with Automotive News Publisher Jason Stein at this month's Automotive News Shift Mobility Forum during CES.

"I know the industry has been talking about the growth of electric vehicles," Fields said. "But the bottom line is you have real products coming to the marketplace now beyond just Tesla."

He pointed to the arrival of vehicles such as the Mustang Mach-E and Volkswagen ID4 crossovers, as well as offerings from EV startups such as Rivian.

Fields said he believes consumers will buy these new EVs. One reason: The Biden administration is likely to enact incentives quickly to encourage sales of full-electric vehicles.

"I think, secondly, you're going to see the continued build-out of charging stations across the country." With more infrastructure in place, consumers will get more comfortable about buying a battery-electric vehicle, even if they don't have a garage where they can charge overnight, Fields said.

"I also think the last thing that's going to turbocharge some of the growth in electric vehicles is what I call the neighbor effect. If you think about Tesla, that was really about early adopters. Now we're getting to mass adoption. And if you see your neighbor that all of a sudden has an electric vehicle, that, at a minimum gives you permission, if you will, to go and buy one as well.

"And it's not just a science project that's out there in the marketplace."

Mobileye is collecting data to create high-definition maps for self-driving.

A faster track to owning an AV? Aspirations to place self-driving technology in the hands of ordinary vehicle owners had largely been relegated to the back burner. As automakers and technology companies better understood the enormity of that challenge in recent years, they've chosen to focus on simpler tasks in the shorter term, concentrating on building virtual drivers for niches such as geography-constrained taxis, last-mile delivery and highway travel. With the exception of a certain billionaire who pitches "full self-driving capability" different from the rest of the industry, most companies have considered the real deal something far off in the fuzzy future. That's changing. Global supplier Mobileye unwrapped plans last week to make self-driving technology available in personally owned vehicles in 2025.

Honda taps GM's Cruise to bring new mobility to Japan Honda Motor Co. is leveraging a tie-up with General Motors and Cruise to ramp up its new mobility business by importing some of Cruise's newest wheels for use in Japan this year. Under the plan, announced Wednesday, Honda will receive the first self-driving test vehicle from Cruise for assessment in Japan this year. After that, Honda plans to also start a mobility-as-a-service, or MaaS, enterprise in Japan using the Cruise Origin autonomous shuttle.

Trump pardons Anthony Levandowski Before leaving office on Wednesday, now former President Donald Trump pardoned Anthony Levandowski, saving the engineer from more than a year in prison for stealing trade secrets from his former employer, Alphabet's Waymo, Bloomberg reported. The pardon was supported by venture capitalist and Trump supporter Peter Thiel, virtual-reality developer Palmer Luckey and former Walt Disney executive Michael Ovitz, among others, according to a statement from the White House on Tuesday.

The moped-sharing startup with thousands of EVs and hundreds of collisions.

GM, Microsoft lead $2 billion in funding for Cruise, team up on tech.

Volkswagen's Keogh: 2021 will be breakout year for EVs.

Kia says it's looking at EV projects with multiple firms after Apple report.

Rivian raises $2.65 billion in latest round of funding.