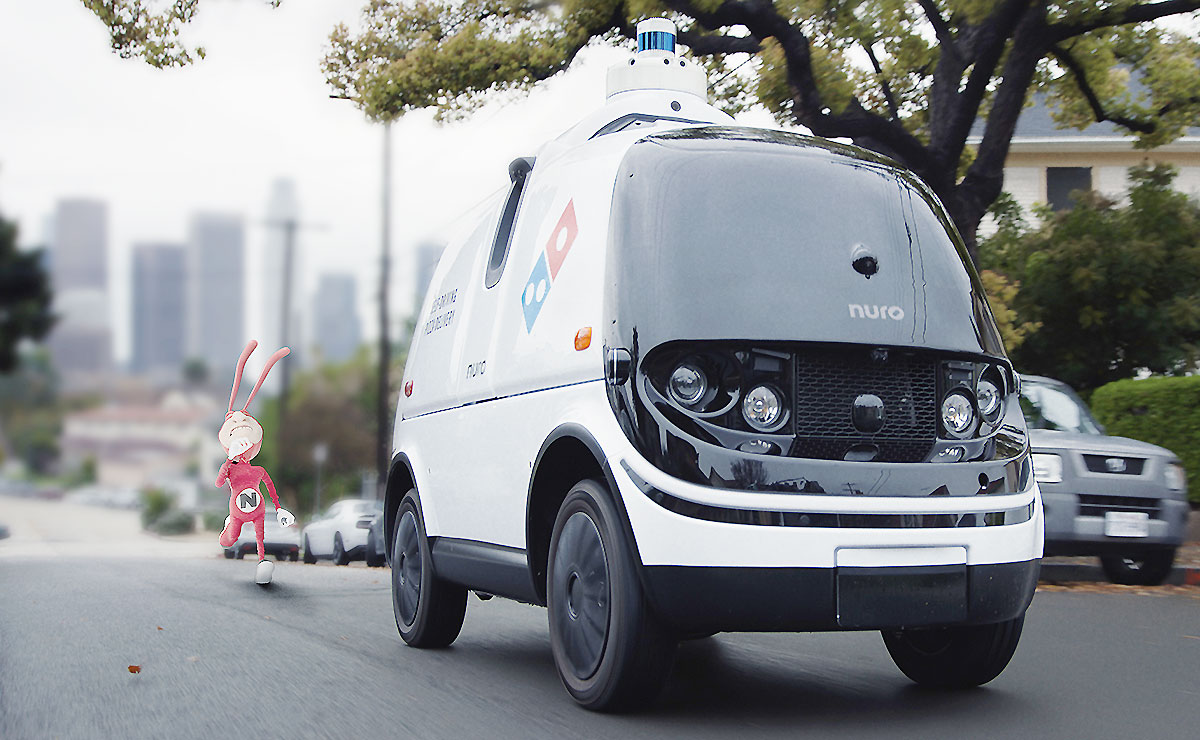 The Noid is back. And it's gotten a makeover.

Domino's Pizza has brought back its red-suited, long-eared villain from the late '80s in a campaign that hypes its new driverless pizza delivery.

The Noid returns in TV spots trying to disrupt a delivery being handled by the Nuro R2 robot, an autonomous vehicle that operates without a driver. The self-driving robot is being tested by a single Domino's location in Houston for online prepaid orders at certain hours as part of a partnership Domino's began with Nuro in 2019.

The spot was shot more than a year ago, then put on hold when COVID-19 delayed the rollout of the Nuro R2.

The Noid, for the uninitiated, was a character Domino's introduced in 1986 in spots from agency Group 243. With its floppy ears and red suit with an "N" on the belly, the Noid was determined to destroy pizza. Time after time, Domino's survived the Noid's attacks. The premise worked to promote the chain's timely delivery. "Avoid the Noid" was a phrase that was hard to avoid for years.

The updated Noid has less of the "intense anger or glee" of the original, says Kate Trumbull, Domino's vice president of advertising.

The new ad opens with a Domino's worker loading two medium pizzas into the Nuro R2 as an announcer says: "At Domino's we're constantly innovating to find better ways to deliver you pizza, which is why we're testing driverless delivery powered by Nuro. And it's got someone back to their old habits." Just then, the creature appears out of nowhere and lands its "pizza crusher" in the path of the moving R2. The driverless vehicle artfully veers away to avoid a collision.

The character will also be featured in the "Crash Bandicoot: On the Run" mobile game. Noid T-shirts and tumblers are for sale on Amazon, and GIPHY has Noid GIFs. In other words, the Noid is once again going to be hard to avoid.

SAE refines levels of automation in push for system clarity The levels of driving automation, the industry's go-to framework, were updated this week to clarify differences between Level 3 and Level 4, part of an effort to better define and group the capabilities of driver-assistance and autonomous driving systems as well as driver responsibilities. The six levels were established by SAE International in 2014. They range from 0 — no driving automation — to 5 — full automation.

Battle of the self-driving sensors? Argo AI, the self-driving startup backed by Ford Motor Co. and Volkswagen Group, has developed a sensor it believes will be key to commercializing autonomous transportation in cities and suburbs and on highways. The Pittsburgh-based company, which plans to go public as soon as this year, unveiled a lidar sensor Tuesday capable of "seeing" 400 meters down the road with almost photographic detail. Meanwhile, self-driving sensor startup Aeva Technologies Inc., founded by former Apple Inc. engineers, said on Thursday that its sensor can detect other vehicles from beyond 500 meters and pedestrians from a distance of more than 350 meters.

Uber Technologies Inc. and Lyft Inc. both turned in narrower losses than expected in the first quarter.

U.S. electric commercial vehicle maker Electric Last Mile Solutions has signed a letter of intent for Cox Automotive to supply service and repairs for the delivery van it will launch this year.

House Democrats are pushing for tens of billions of dollars in funding to shift to electric vehicles and away from gasoline-powered vehicles and build hundreds of thousands of charging stations.

EV Freedom Act can bring fast charging and a just future to all, Michigan Rep. Andy Levin writes in commentary.

Will today's praise for EVs live up to tomorrow's reality?

Uber, Lyft and other gig-economy companies face a new challenge from the Biden administration to their use of contract workers, but as they gear up for a fight in Washington they could turn to a lobbying playbook that helped them score a decisive win against California regulators last year.