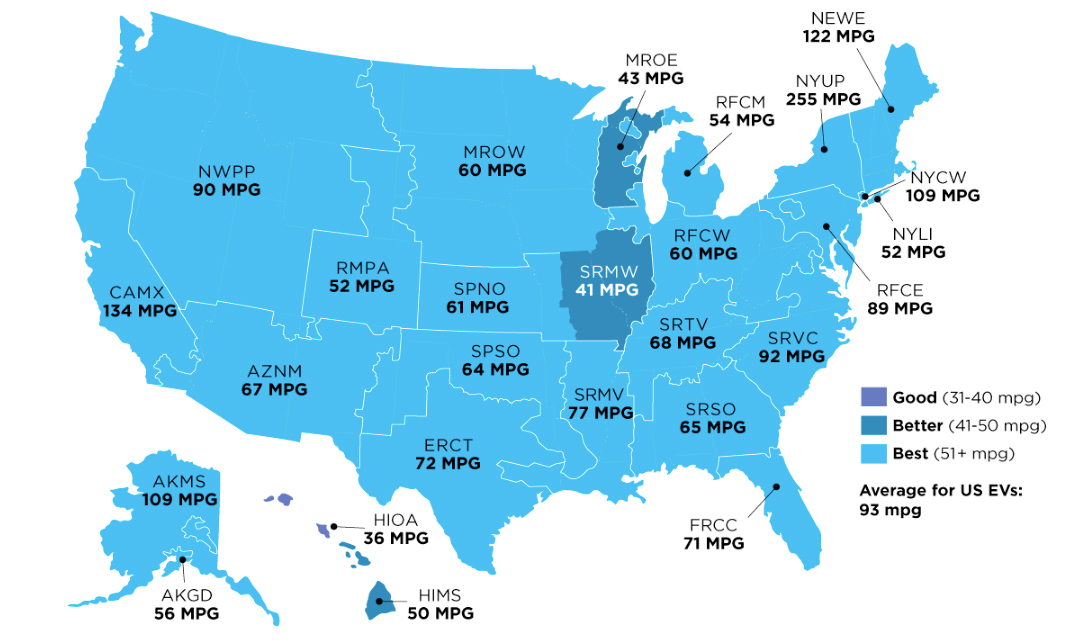 Electric vehicles are more environmentally friendly than their gasoline-fueled counterparts.

But they run on electricity generated in power plants, which produce their own emissions. That's made it more difficult to discern the actual climate benefits EVs deliver over cars equipped with internal combustion engines.

A new report from the Union of Concerned Scientists brings greater clarity to that question. At a time when the Biden administration is touting electric vehicles as a means to blunting climate change, the report finds that across the country, electric vehicles are more environmentally beneficial than ever.

With power-plant emissions considered, driving an EV is equal to or better than driving an ICE car getting 50 miles per gallon, and that's the case across 97 percent of the U.S., according to the report.

From an emissions standpoint, the average electric vehicle is equivalent to a 93-mpg conventional vehicle, the report says, while the average new gasoline car reaches 31 miles per gallon, and new trucks 23 mpg.

"Passenger cars and trucks are a significant source of global warming emissions in the U.S.," writes David Reichmuth, senior engineer in the Clean Transportation Program at the Union of Concerned Scientists, a nonprofit science advocacy organization. "Switching from gasoline to electricity is a vital solution for reducing emissions and avoiding the worst impacts of climate change."

Researchers analyzed data from the EPA on regional power-plant emissions from 2019 and combined it with assessments of fueling and driving emissions from gasoline-powered cars.

Regional differences in power plants can account for a wide variety in emissions. As shown on the map above, compiled by UCS, the average electric vehicle driven in upstate New York would generate emissions equivalent to a 255-mpg conventional car. On the lowest side of the spectrum in the contiguous U.S., EVs driven in a pocket that encompasses portions of Illinois, Iowa and Missouri would generate the emissions equivalent of a 41-mpg gasoline vehicle.

Power is getting cleaner: emissions related to electric vehicles have dropped 15 percent from UCS estimates made three years ago.

Overall, at a time when electric vehicles are proliferating throughout the auto industry, the report underscores the environmental benefits they're capable of delivering.

Waymo, J.B. Hunt form partnership centered on self-driving big rigs Waymo's autonomous big rigs will soon be hauling goods along one of the busiest freight corridors in the country. The Google affiliate said Thursday it has partnered with trucking and logistics firm J.B. Hunt Transportation Services Inc. to carry freight along Interstate 45 between Houston and Fort Worth, Texas. The service – which begins with a human safety driver behind the wheel – marks the first step of what both companies envision as a long-term partnership exploring the technical and operational aspects of running a fleet of self-driving Class 8 trucks.

Argo AI's CEO says IPO expected within a year Self-driving startup Argo AI, backed by Ford Motor Co. and Volkswagen, expects to pursue a public listing within the next year, CEO Bryan Salesky said on Wednesday. "So we're actively fundraising and are going out this summer to raise a private round initially," Salesky said at The Information's Autonomous Vehicles Summit. "And then we're looking forward to an IPO within the next year."

Tesla to launch high-end Model S 'Plaid' to fend off Mercedes, Porsche Tesla Inc. plans to deliver a high-performance "Plaid" version of its Model S on Thursday, aiming to reignite interest in the nearly decade-old sedan and fend off rivals such as Porsche, Mercedes-Benz, Lucid Motors and other automakers in the luxury EV market. The new model is priced at $129,990 against $79,990 for a long-range Model S. The automaker plans to livestream the delivery.

Newer Toyota, Lexus vehicles to get the Parkopedia service, which includes parking information, reservation services and an integrated payment platform.

G-7 eyes ambitious shift to electric cars and away from oil.

"Automakers and tech companies have been allowed to liberally develop and test promising automated and advanced driver-assist technology. However, momentum may be shifting toward tighter control as risks become more apparent," writes Brian Thompson of law firm Wilson Elser.

Help for EV drivers stuck without a charge.

Sponsored Content: Toward hyperconnectivity: 5 ways to position your business to profit from connected car