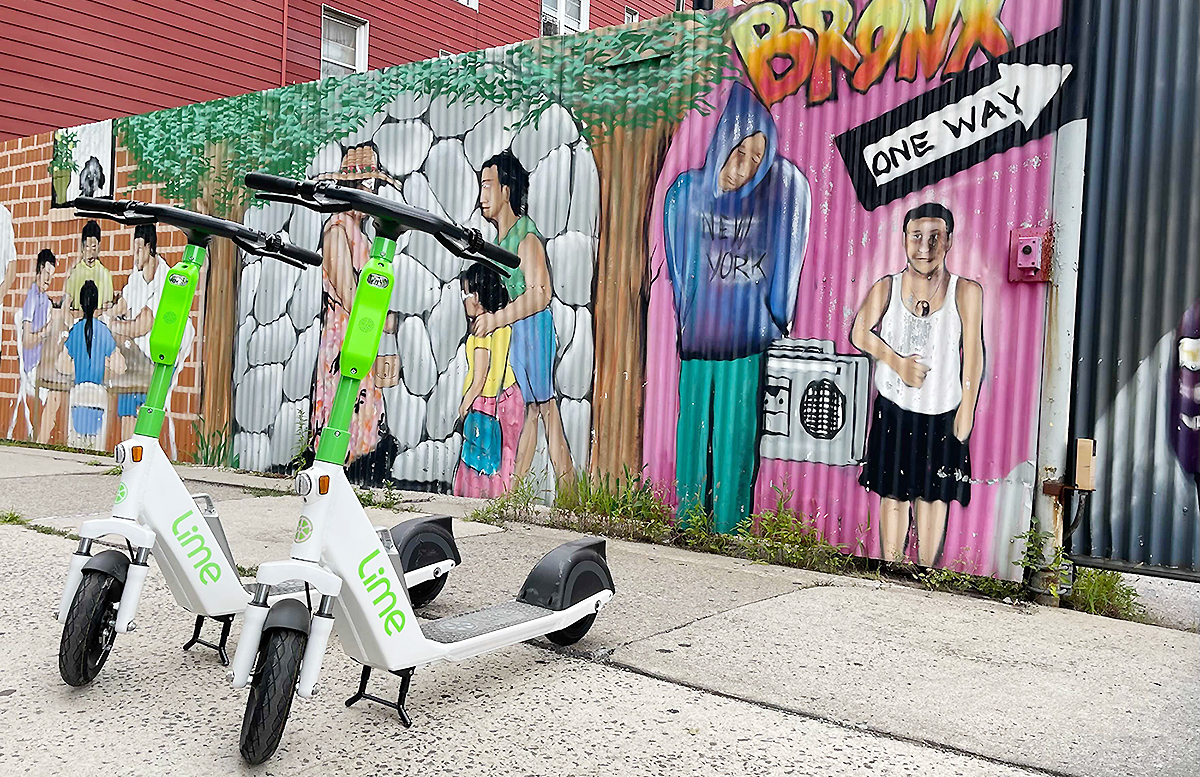 Bird and Lime, two of the startups taking part in the pilot and some of the biggest competitors in the e-scooter marketplace, have raised more than $1.5 billion from investors collectively over the past half-decade, despite being locked out of the largest U.S. market.

"What happens in New York reverberates globally," said Phil Jones, senior government relations director with Lime. "It's an amazing opportunity to serve New Yorkers and show what Lime can be."

E-scooters became legal in New York state last year, and the city this year selected California companies Bird and Lime, as well as the Chicago-based Veo, to operate a scooter-sharing program in the Bronx, which kicked off on Tuesday.

Lime and Bird scooters emerged in U.S. cities throughout 2017 and 2018 — providing a new way to get around, but also raising concerns about safety and how to park the scooters without blocking sidewalks.

While privately owned scooters can roam the five boroughs, scooter-sharing is so far limited to the East Bronx. Lime, Bird and Veo can place up to 3,000 scooters over the next year in a radius that includes Eastchester, Co-op City and Morris Park.

A second phase of the pilot program will launch in 2022, which could include up to 6,000 e-scooters and more neighborhoods in the southern end of the borough.

The ProMaster van was designed, with input from Amazon, to have "unique last mile delivery features."

Ram readies electric ProMaster van for 2023 Ram, responding to customer demand, said the ProMaster van will offer a battery-electric variant in 2023 as the brand prepares to adopt electrification across its lineup. An electric Ram 1500 pickup will follow in 2024 and square off against rivals such as the GMC Hummer EV pickup, Ford F-150 Lightning and electric Chevrolet Silverado. Stellantis said last month that it plans to invest more than $35 billion through 2025 in electrification and software. The automaker will have four electric vehicle platforms that achieve ranges from 300 to 500 miles. By 2025, 98 percent of Stellantis' models in Europe and North America will be electrified.

The crowded lidar field is catching a break Lidar companies are drawing the attention of customers — and perhaps equally importantly, investors — as they race to make their systems better and less expensive. Old stalwarts and newcomers to the field alike are benefiting from the industry's embrace of lidar sensors for driver-assist systems. The near-term plans for lidar to reach mass production for assist systems should give lidar companies the revenue they need while waiting for the self-driving era that's still years in the future.

Waymo brings self-driving taxis to San Francisco — with a catch Google affiliate Waymo will offer rides in its autonomous vehicles to select passengers in San Francisco, marking its second launch of a taxi service and a hint of the company's commercial ambitions. Waymo began ferrying passengers last fall in suburban Phoenix in fully driverless cars. Unlike in Arizona, however, Waymo riders in San Francisco will have a safety driver behind the wheel, according to a company spokeswoman. Waymo has been running its vehicles around the city since 2019, without passengers, to map and learn routes and traffic situations.

Ample, a San Francisco-based developer of swappable electric vehicle batteries, has raised $160 million in a new funding round.

In a short film made by Cruise, a self-driving car named Poppy gets to know San Francisco.

Toyota's top digitalization guru is touting big breakthroughs through the application of software and connectivity services.

Meanwhile, the CEO reveals plans for a lifelike robot that he says will take the drudgery out of everyday life.

Walmart has undertaken a series of autonomous vehicle pilot projects.

The cloud is essential to a future of competitive EVs and AVs, says Rick Sturgeon, senior director of transportation and mobility at Dassault Systemes.

Lyft is partnering with Oscar Mayer to surprise a few lucky customers with a trip in the most exclusive wheels in town — the Oscar Mayer Wienermobile. In a three-day promotion that ends Friday in New York, Los Angeles, Atlanta and Chicago, Lyft XL riders may receive a ride in the hot dog-shaped vehicle. They won't know they are being picked up by the Wienermobile until it arrives.