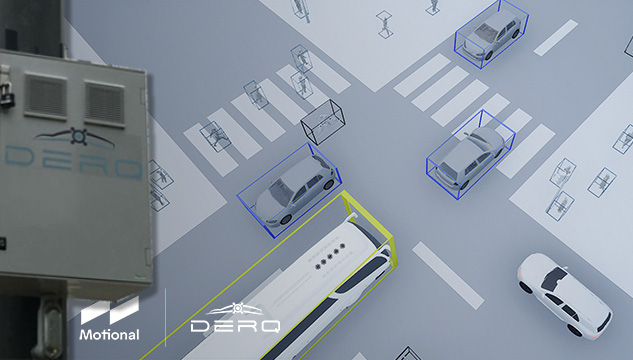 Driverless vehicle company Motional and artificial intelligence startup Derq will partner on a pilot in Las Vegas this spring to give Motional's vehicles a bird's-eye view.

Motional, based in Boston, is the year-old, $4 billion autonomous-driving joint venture of supplier Aptiv and Hyundai. Derq is a vehicle-to-everything spinoff from the Massachusetts Institute of Technology and is based out of Dubai and Detroit. The companies will work together to identify challenging situations that could come in the way of Motional's vehicles.

Along with using data from their sensors to navigate their surroundings, Motional vehicles can receive data transmitted wirelessly from the road infrastructure using Dedicated Short Range Communications.

The companies said Tuesday that Derq's AI technology supplies self-driving cars with even more information about their surroundings by giving them a view from above the road. Derq installs cameras on roadside infrastructure, such as traffic lights, to gather information about vehicles, pedestrians and cyclists inside the intersection. It will transmit the data to Motional vehicles.

First, the data will be studied offline, then used in real time to help inform the driving of Motional's vehicles.

From an elevated vantage point, "Derq's system can see cars exiting parking lots, pedestrians stepping between parked cars, and cyclists weaving through cars stopped at a red light," Motional said in a statement. The technology "can also detect and alert road operators about dangerous traffic incidents unrelated to autonomous vehicles, such as crashes and wrong-way drivers."

The company said an unspecified number of Motional vehicles will be part of the pilot, which will last for an undetermined period of time. The companies did not disclose the intersections.

The partnership expands on Motional's work in Las Vegas, where the company has been operating driverless Chrysler Pacifica minivans. Derq also partners with the city to deploy software on infrastructure and uses cameras and radar to analyze the movement of road users.

GM CEO Jack Smith drives an EV1 onto a car carrier in 1996, a month before launch.

An electrifying tale The car was an engineering marvel aimed at retail consumers, a celebrity magnet and a blast to drive. But, in the end, the program was too costly to be sustained. This week, Automotive News marks the 25th anniversary of the launch of General Motors' EV1, the forerunner of the modern electric vehicle age. "EV1: A legacy in a new light" features special news reports, videos and podcasts.

Cadillac prices first full EV at just below $60,000 The 2023 Cadillac Lyriq, the midsize crossover that will begin the brand's march toward a fully electric lineup, will start at half the price of a 2022 GMC Hummer pickup, Cadillac says. The Lyriq will have a base price of $59,990 including shipping, Cadillac said Wednesday as it revealed the production version. General Motors plans to begin building it in the first quarter of 2022 at Spring Hill Assembly in Tennessee.

U.S. agencies probe fatal Tesla crash with 'no one' driving Two U.S. agencies on Monday said they were investigating a Tesla crash in Texas on Saturday that left two dead and which local police said appeared to have occurred with no one in the driver's seat. NHTSA, which regulates vehicle safety, and the National Transportation Safety Board both said they would investigate the crash. Witnesses told the police that the accident happened shortly after the victims left a house, saying they would test the automated driving capability. Texas police told Reuters that search warrants would be sought to secure vehicle data, after Tesla CEO Elon Musk tweeted that the automaker's data showed the vehicle was not operating on Autopilot.

From cutesy to cutting edge, China has an EV for everyone.

Genesis unveiled a battery-powered version of its G80 sedan as the brand's first full-electric model, promising sporty acceleration and a generous driving range.

"The key to eliminating range anxiety isn't bigger, expensive batteries in every EV; it's having additional energy readily available on those occasions when it's needed," writes Automotive News Staff Reporter Larry P. Vellequette.

Nvidia introduces next-gen AV processor at annual conference
Sponsored Content: Lead Quality and Why It Matters More Now Than Ever