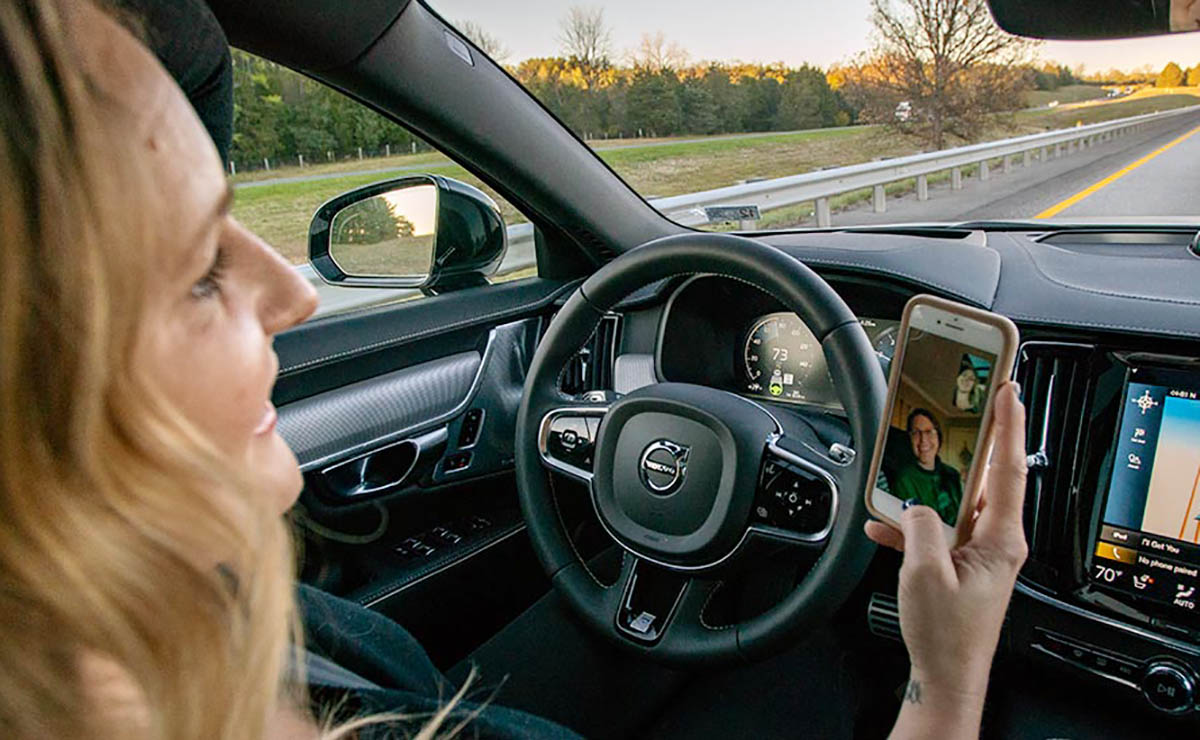 Human motorists can be lulled into a false sense of security by new technology that's meant to assist — but never replace — them behind the wheel.

This "automation complacency" has been cited as a contributing factor to several fatal crashes involving advanced driver-assist systems, and now the findings from a study conducted by the Insurance Institute for Highway Safety further spotlight the pitfalls associated with the influx of these new technologies.

Researchers with IIHS and the Massachusetts Institute of Technology's AgeLab found that as drivers grew more comfortable with adaptive cruise control and lane-keeping features, they were more likely to show signs of inattention to the driving task. Sometimes significantly so.

After a month of driving a Volvo S90 sedan equipped with both adaptive cruise control and lane-keeping, part of the automaker's Pilot Assist package, motorists were 12 times more likely to remove both hands from the wheel at the end of the month than they were at the beginning, the researchers found.

They grew more likely to pick up their cellphones as they became more comfortable throughout the month, but notably they did not increase the frequency of texting or other phone-related distractions.

The subtle differences in results are a reminder that not all driver-assist features are the same, and more so, underscore the role driver-monitoring systems can play in ensuring motorists don't let their attention wander from the road.

"This supports our call for more robust ways of ensuring the driver is looking at the road and ready to take the wheel when using Level 2 systems," said IIHS senior research scientist Ian Reagan, lead author of the study.

IIHS is not the only organization calling for such oversight. The National Transportation Safety Board has spotlighted the role automation complacency has played in multiple deadly crashes involving Tesla's Autopilot driver-assist system and recommended automakers develop safeguards that ensure motorists keep their eyes on the road.

Last month, the European New Car Assessment Program began to incorporate driver-monitoring effectiveness into its overall vehicle ratings program. But U.S. regulators and vehicle-testing organizations have not yet followed suit.

Findings from the IIHS study could strengthen the case for doing so. Further, they should remind motorists that driver-assist systems do not equal autonomous ones. At least for now, human drivers are squarely responsible for driving.

Hyundai's big moves into electrification start with big models Hyundai is moving rapidly to make itself a global player in green-car technology by rolling out hybrid and plug-in hybrid versions of its top-selling models over the next two years, along with mass-market electric vehicles, ending their niche status in the automaker's U.S. lineup. Last week, to get the ball rolling, Hyundai revealed a redesigned Tucson with hybrid and plug-in options, hoping to better compete with rivals such as the Toyota RAV4 and Ford Escape that are being offered with both electrified powertrains in the popular compact crossover segment. The South Korean automaker currently sells a small number of electrified vehicles, such as the Kona EV. But the Tucson product plan brings the future powertrain alternatives to its bestselling vehicle globally. The Santa Fe crossover and Elantra sedan will also offer their first hybrid options.

FCC votes to shift portion of auto safety spectrum to Wi-Fi use The Federal Communications Commission on Wednesday approved a plan to allow a growing number of wireless devices to use part of a spectrum previously set aside for automakers to develop methods for vehicles to communicate with each other. It's a decision that the Transportation Department warned could result in "thousands of accidents." The FCC voted 5-0 to split the spectrum block set aside for auto safety. Over the objections of automakers and some U.S. agencies, the FCC decision finalized a plan announced last year to divide a block of the 5.9-gigahertz spectrum band that was reserved in 1999 for automakers to develop technology called Dedicated Short Range Communications but has so far gone largely unused.

How 5G technology will move forward in the auto world Because of new demands for connectivity, flexibility and reliability brought on by the pandemic, investment and interest in 5G technology will continue to increase post-COVID, according to a study released Tuesday by IHS Markit in partnership with Qualcomm and Omdia. This will be especially important for the auto industry as more vehicles become connected. It will also have implications for autonomous-vehicle applications. Although the pandemic created "significant supply chain interruptions that stymied the expanded rollout of 5G," this will be a short-term delay, according to IHS.

U.S. auto safety regulators said Thursday they are opening a formal regulatory proceeding that could eventually result in the adoption of new safety standards for autonomous vehicles.

The Alliance for Automotive Innovation applauds a new incentive plan for EVs in California.

Quebec to ban sale of new gasoline-powered cars as of 2035. Meanwhile, Britain will move up a ban on new gasoline and diesel cars and vans from 2035 to 2030, Prime Minister Boris Johnson said.

May Mobility and on-demand shuttle provider Via to partner in Texas.