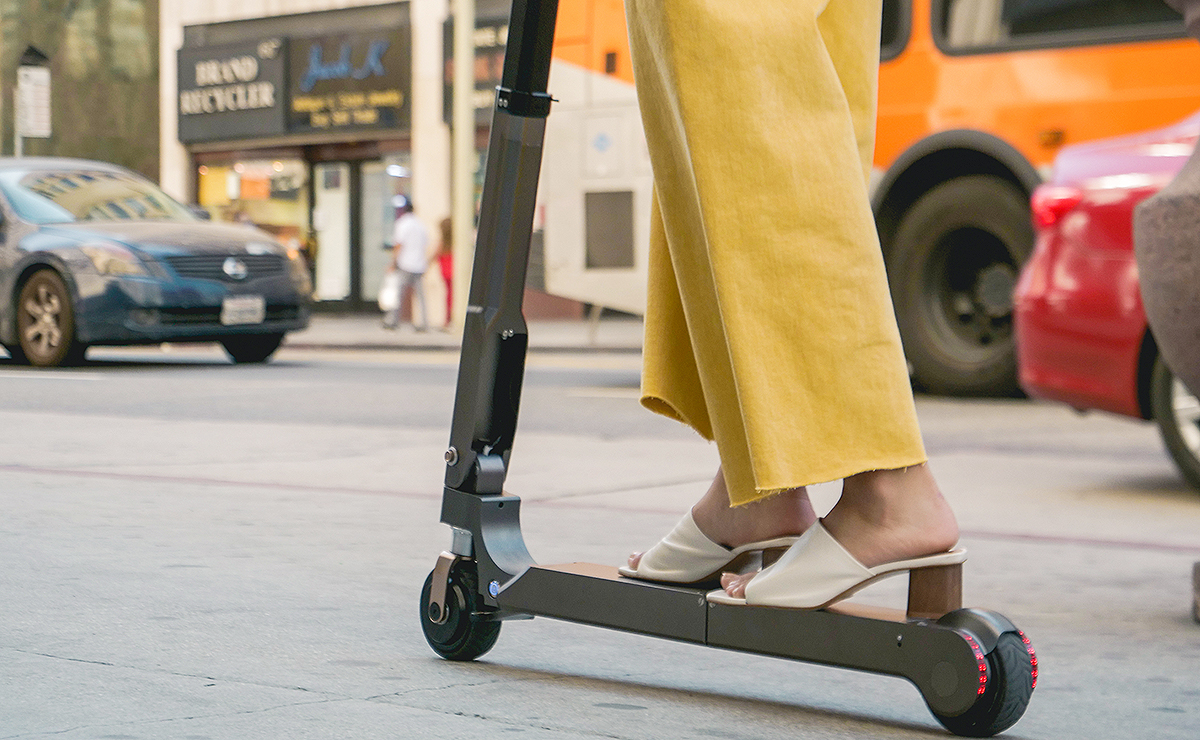 The latest electric concept from Hyundai Motor Group features rear-wheel drive and is powered by a lithium ion battery, but it's not an electric car.

It's the automaker's new prototype scooter. It could be mounted on future Hyundai and Kia models, giving drivers a way to cover the first or last mile of a journey while keeping their cars parked.

Hyundai joins several other automakers in navigating first- and last-mile mobility with scooters or bicycles at the same time they are developing new electric vehicle technology.

When mounted on a vehicle, Hyundai's scooter is charged automatically using electricity created while driving, according to the group.

DongJin Hyun, head of the Hyundai Robotics team, said in a statement that in addition to addressing first- and last-mile mobility, the auto group seeks to reduce congestion and emissions in city centers.

The model builds on the group's Ioniq Scooter concept, unveiled in 2017. The automaker has added suspension to the front wheel in the new design.

The concept could be charged while folded on the inside of the front door of the Ioniq Electric, an EV developed as part of Hyundai's Project Ioniq, an r&d effort focused on the future of mobility.

The new prototype reaches a top speed of nearly 12.5 mph. The scooter features a tri-fold design and digital display showing battery status and speed. The scooter has a range of about 12 miles on a single charge, though Hyundai plans to install a regenerative braking system to increase that.

Hyundai did not announce which vehicles the prototype would be housed in. Hyundai also did not provide a launch date.

E-scooters such as those made by Lime, Bird and Ford Motor Co.-owned Spin, have dominated micromobility in recent years, providing urban customers with multimodal travel.

Many of these brands, however, face problems with rider safety and regulations.

Audi unveiled its combined electric scooter and skateboard, the e-tron Scooter, in August. It has a range of 12.5 miles and can go up to 12.5 mph. The scooter, which a rider can operate with one hand, can be folded and stored in the back of a vehicle.

Audi said the scooter could be available as part of a fleet in urban areas or offered as an extra to customers who buy Audi e-tron models, some of which can charge a scooter through a socket in the trunk. The scooter is to be available late next year.

BMW Group, in collaboration with scooter developer Micro, announced its City Scooter in May.

The scooter has a tri-fold design and a range of 7.5 miles. BMW's scooter is expected to be available for $890 at select dealers in September.

Volkswagen presented a pair of concept scooters this year: a more traditional e-scooter, Streetmate, and a foldable Cityskater "electric street surfer," which has two front wheels and one rear wheel.

Ford has also tried to enter the micromobility sector with its foldable bike concept.

Ford and Dahon released a prototype folding electric bicycle in 2015. The MoDe:Me e-bike, part of the automaker's Smart Mobility plan, was designed to integrate into a vehicle's trunk.

Consultant group McKinsey & Co. expects the last-mile mobility market in the U.S., Europe and China to grow to $500 billion by 2030.

An engineering technician for the Insurance Institute for Highway Safety demonstrates the self-parking feature of a 2019 BMW 3 series at the IIHS-HLDI Vehicle Research Center in Ruckersville, Va., on July 22, 2019.

Study finds driving assistance hesitation New-vehicle owners are willing to adopt some driving assistance technologies, but are hesitant about other systems or alerts, according to J.D. Power's annual technology experience study. Lane-keeping and centering systems, as well as other alerts, can be so bothersome that new-vehicle owners will often disable them or avoid them on future purchases, according to the study. J.D. Power's 2019 U.S. Tech Experience Index Study, released Tuesday, considers the way drivers interact with, or choose to disable, advanced driver assistance systems in vehicles.

Levandowski charged The indictment of former Uber Technologies Inc. engineer Anthony Levandowski, announced Tuesday by federal officials, adds a new criminal chapter to the saga that hung over Waymo's civil claims of trade-secret theft against Uber. That case was settled last year. Levandowski, 39, voluntarily surrendered to authorities and faces a maximum of 10 years in prison if he's convicted, Bloomberg reports.

Lidar maker's sensors auto-ready Unlike some rivals, Luminar has focused on automotive readiness since its early days, integrating Toyota's kaizen improvement practices into its manufacturing center in Orlando, Fla., where about 40 lidar sensors are made in a given week. Now that the company is expanding its footprint in Orlando and planning to start series production of its latest product next year, its early emphasis on manufacturing fundamentals, Luminar CEO Austin Russell says, will help the company ramp up production from dozens of units in a given week to thousands.

Autonomous driving software specialist Zenuity will team with the European Organization for Nuclear Research to develop autonomous vehicles that can make predictions and decisions faster to improve safety. Zenuity is a joint venture between Volvo Cars and Veoneer.

Toyota will deploy some 3,700 vehicles and mobility products at next year's Summer Olympics in Tokyo, nearly all of them electrified, including a futuristic self-driving pod car that will escort the Olympic torch and lead the marathon race.

Ford targets urban commuters with its first EV for China.

NHTSA, the nation's top auto safety regulator, says it plans to test how drivers could use cameras to replace traditional rearview mirrors in automobiles, a technology already allowed in other countries, Reuters reports.

AVs are on a path to overlook the disabled.

On the latest episode of "Weekend Drive," GM mobility executive Alex Keros touched on how the automaker plans to breathe new life into "transit deserts" through innovative car-sharing options.

Porsche designed a button-free dash for the Taycan EV.

Porsche has expanded its subscription service to four cities in the U.S. and Canada, Bloomberg reports.

Batteries are about life cycle, not just life, writes John Simlett, EY's Global Future of Mobility leader in the automotive and transportation sector.

The technology is part of Nissan’s upgraded ProPilot driver assistance system, which will debut in the new Nissan Skyline next month in Japan.

Nissan has developed a golf ball that finds the hole every time, thanks to the automaker's ProPilot technology.