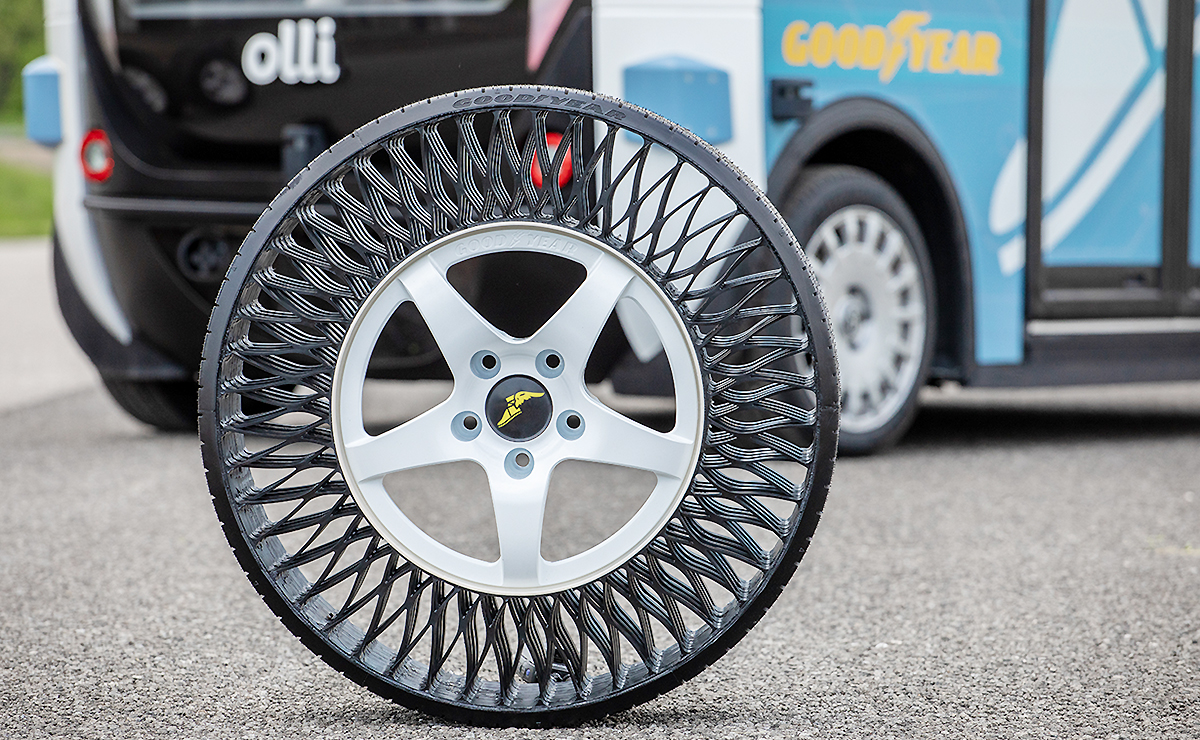 Goodyear Tire & Rubber Co. says it plans to affix airless tires it has developed to Olli, a 3D-printed, autonomous and electric shuttle, for test runs in Florida.

The tire manufacturer is partnering with ground mobility company Local Motors and mobility network operator Beep, both of which developed the second iteration of Olli. Shuttles equipped with Goodyear's NPTs, or non-pneumatic tires, will be used in the Jacksonville Transportation Authority's Autonomous Vehicle Test & Learn program.

Jacksonville's urban landscape is ideal for testing the alternative tires because of its speed limits and streamlined travel paths, Goodyear said in a Tuesday news release.

"This is an important milestone as we look to advance mobility today and as we look to introduce the first completely sustainable and maintenance-free tires by the end of the decade," Goodyear Senior Program Manager Michael Rachita said in a statement.

Goodyear and Local Motors say they've been working on the NPT-supported shuttle for three years. The plan is to collect data — such as noise levels and ratings on ride comfort — from the Jacksonville test runs.

The companies' hope is that testing reveals more about the NPTs, which aren't pressurized. It's a technology they're floating as potentially more sustainable and less of a maintenance hassle than traditional tires. Automotive News reported that rubber-free tires still have a long way to go because of weight-handling challenges and a performance trade-off.

Local Motors President Vikrant Aggarwal said in a statement that autonomous vehicles such as Olli still need to decrease maintenance costs and "perform reliably," but added that he thinks Goodyear's NPTs will be less of a burden for maintenance teams. NPTs could become an industry standard, he said.

Self-driving startup Aurora plans to go public Driverless technology startup Aurora Innovation Inc. said it agreed to go public via a merger with Reinvent Technology Partners Y, a blank-check firm led by executives including LinkedIn co-founder Reid Hoffman and Zynga founder Mark Pincus. The company anticipates a total valuation of $11 billion. In a statement, Aurora said it expects to have $2.5 billion in cash at closing, raising nearly $2 billion from the transaction. Aurora is led by CEO Chris Urmson, and Hoffman is a board member. In March, the Silicon Valley-based startup added Volvo Group to its list of partners to develop self-driving trucks. Paccar Inc. joined with Aurora in January for a similar development deal. Aurora has said its investors include Amazon, Hyundai Motor Co. and Kia Motors Corp.

U.S. urges 50,000 Chevy Bolt owners to park outside because of fire risks U.S. auto safety regulators, warning of fire risks, on Wednesday urged 50,000 owners of Chevrolet Bolt electric vehicles that were recalled last year to park outside and away from homes and other structures after charging. Earlier on Wednesday, General Motors made the same recommendation and added that owners should not leave vehicles charging overnight. The recommendation was prompted after the largest U.S. automaker said it was investigating reports of two recent fires in vehicles that were recalled in November for fire risks. The 50,000 Bolts are from the 2017-2019 model years and were recalled for the potential of fire in the high-voltage battery pack underneath the back seat's bottom cushion.

Pilot project in Seattle to reduce emissions in delivery services.

Volkswagen Group CEO Herbert Diess: "We set ourselves a strategic target to become the global market leader in electric vehicles -- and we are well on track."

Italy's Pininfarina has unveiled the Teorema, a virtual concept model showcasing its interpretation of electric and autonomous mobility.

Michigan's American Center for Mobility is at a critical point of its nearly four-year existence — it's time for the proving ground to prove its viability, Crain's Detroit Business reports.