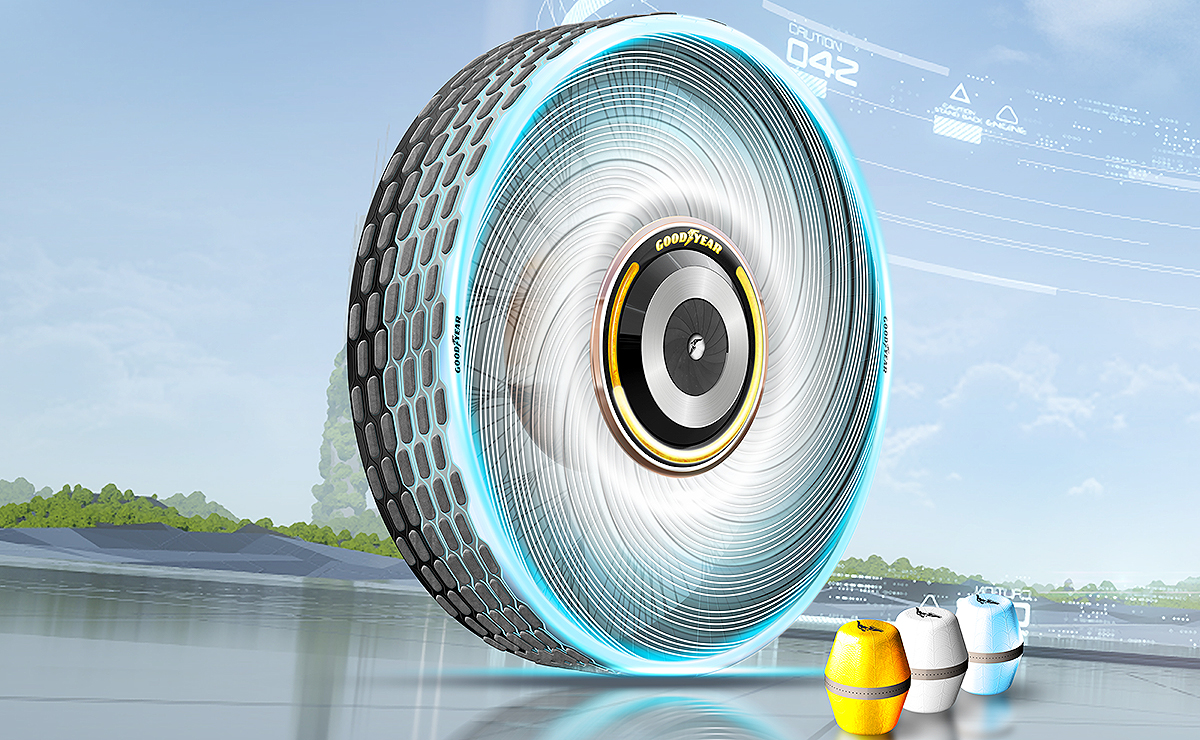 Dark roast one minute. Half-caf the next. Modern coffeemakers allow java fans to switch blends simply by dropping in a new pod. So what if tomorrow's EV drivers could change their tires in a similar way – not with a pod, but with a capsule that regrows tread?

That's the idea behind the latest concept from Goodyear, the reCharge tire.

The tire, designed for electric vehicles, would be made with a biodegradable tread compound reinforced with fibers inspired by spider silk. Goodyear says the tread would be "recharged" by inserting capsules filled with a "customized liquid compound" into the center of the tire.

"These capsules allow the tread to regenerate and the tire to adapt over time to climatic circumstances, road conditions, or simply how you want to travel," Goodyear said Tuesday in a news release. "Thanks to artificial intelligence a driver profile would be created around which the liquid compound would be customized, generating a compound blend tailored to each individual."

The company revealed the concept in a virtual press conference from Brussels. "This is a self-regenerating tire," Mike Rytokoski, Goodyear's chief marketing officer for Europe, told his video audience. He stood next to a tire display stand and a set of color-coded capsules, each representing a different tread blend. "You could have a special blend for winter climates and a different blend for summer environments."

The company had planned to show the reCharge concept at the Geneva auto show, as an encore to concepts such as 2018's Oxygene. That tire had living moss in its sidewalls, designed to breathe in CO2 and release oxygen through photosynthesis. The following year, Goodyear trotted out another lofty concept, the Aero, a tire designed for autonomous flying cars.

This year's Geneva show was canceled because of coronavirus concerns.

GM touts battery cost, range breakthroughs General Motors on Wednesday said it plans to spend $20 billion on electric and autonomous vehicle programs in the next five years and expects its battery costs to fall below the level that analysts say would make EVs competitive with internal-combustion vehicles. GM's proprietary Ultium batteries will cost less than $100 per kilowatt-hour and allow for a driving range of up to 400 miles on a full charge, GM said. That's about 50 percent more than the 259-mile range for the 2020 Chevrolet Bolt.

Waymo raises $2.25 billion in first external funding round In a development that perhaps illustrates the high cost of transforming self-driving technology into a polished product, Waymo said Monday it has raised $2.25 billion in its first external funding round. Further investment is expected soon. Waymo will increasingly eye deliveries. Along with the investment, Waymo CEO John Krafcik said the company has started Waymo Via, a unit focused on hauling packages. That may run the gamut of carrying goods over long distances in Class 8 trucks to making one-off deliveries with Chrysler Pacifica minivans, as Waymo already does in small-scale partnerships with United Parcel Service and AutoNation Inc.

Ford to offer Transit EV for 2022 model year Ford says it will offer a battery-electric version of the Transit cargo van in the U.S. and Canada for the 2022 model year as it looks to strengthen its leadership in commercial vehicles. The automaker said the EV will be available in cargo van, cutaway and chassis cab configurations, plus three roof heights and three body lengths. It declined to discuss range, pricing or other production-related specifics. Ford agreed to build a Transit EV at its Kansas City Assembly Plant as part of its four-year contract with the UAW ratified late last year. It's also planning a Transit EV for Europe.

Nikola merging with Girsky's VectoIQ Former GM Vice Chairman Stephen Girsky's VectoIQ Acquisition Corp. made a merger deal with Nikola Corp. — energizing Nikola's plans for battery-electric and hydrogen fuel cell vehicles along with a hydrogen fueling station infrastructure. The two companies are merging under the name Nikola Corp. and will be listed on the Nasdaq under the new ticker symbol NKLA. The deal is expected to close during the second quarter, according to a statement.

Meanwhile, the former head of Uber's self-driving unit, Anthony Levandowski, filed for bankruptcy protection Wednesday, shortly after a court confirmed that he must pay $179 million to Google to end a legal battle.

Ford deal will allow some customers to share data with Allstate for a mileage-tracking program.

The Toronto Region Board of Trade recommends Highway 407 be converted into the "AV Highway of the Americas," a real-time testbed for autonomous vehicles.

The all-wheel-drive Lincoln SUV could compete against Rivian's R1S (pictured), an electric sport utility vehicle slated to go into production in early 2021. The R1S was on display at the 2019 New York Auto Show.

In what Colorado auto dealers are calling a victory, state senators last week approved legislation that would allow Rivian and other electric vehicle manufacturers to sell directly to consumers — but only after scaling the bill back to exclude traditional automakers with franchised retail networks. The Colorado Automobile Dealers Association, which had fiercely opposed the original bill, said it supported the amendment and now was neutral on the proposal, which goes to the state House for consideration.