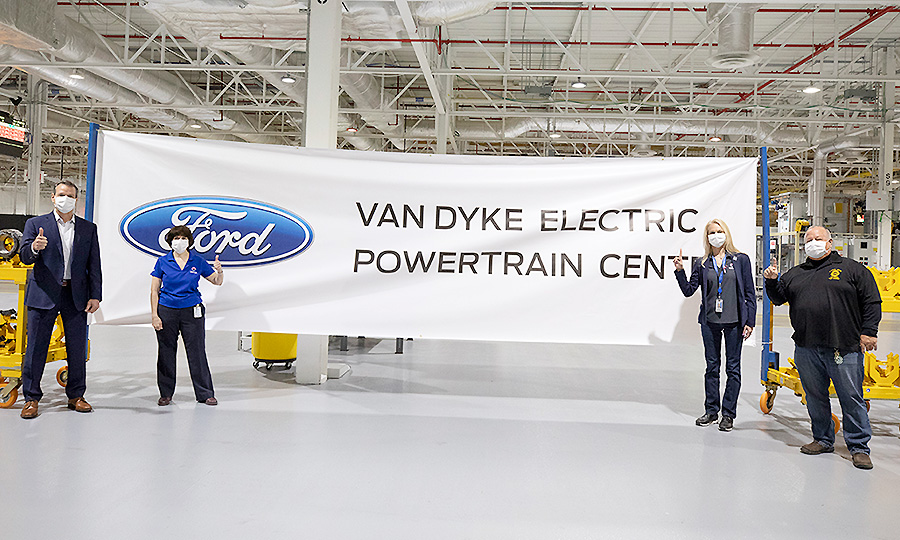 Ford Motor Co. announced this week that its Van Dyke Transmission Plant north of Detroit would be rebranded as the Van Dyke Electric Powertrain Center. The change comes roughly seven months after General Motors said its Detroit-Hamtramck Assembly plant would be known as Factory Zero.

Since the Van Dyke plant opened in 1968, workers have built suspension components and transmissions for gasoline and hybrid vehicles, including the Taurus, Windstar, Transit, EcoSport, Edge and Explorer.

They will soon transition to making electric motors and electric transaxles for hybrid and full-electric vehicles, including the 2022 F-150 Lightning. Ford says electric motor production will begin this summer, and it expects one to come off the assembly line every 75 seconds.

"The advanced technology we are using at the Van Dyke Electric Powertrain Center is taking us to the next level for Ford's electric future," John Savona, Ford's vice president, manufacturing and labor affairs, said in a statement. "The electric transformation we are making now is going to allow us to scale quickly as customer interest grows for our new electric vehicles."

GM, Lockheed Martin to develop vehicle for moon missions General Motors and aerospace giant Lockheed Martin said Wednesday they will develop a vehicle capable of carrying astronauts and equipment longer distances across the moon. The announcement comes as NASA lays groundwork to return humans to the lunar surface. It is the companies' response to a request NASA put out last year, which asked members of the automotive industry to pitch ideas for lunar terrain vehicles, known as LTVs, that could travel faster and farther on the moon than the ones used during the Apollo program.

Tesla loses U.S. designation for some advanced safety features Newer Tesla Model 3 and Model Y vehicles will no longer be labeled as having some advanced safety features after the automaker said it was removing radar sensors to transition to a camera-based Autopilot system, NHTSA said Wednesday.
The safety agency confirmed it updated its website to show that Model 3 and Model Y vehicles produced on or after April 27 "do not have NHTSA's check mark for recommended safety technologies: forward collision warning, lane-departure warning, crash imminent braking and dynamic brake support."
On Tesla's earnings call last month, CEO Elon Musk called radar one of the last "crutches" the EV maker wants to do away with in its pursuit of full autonomy, which has proved elusive so far. Musk has been famously opposed to lidar technology, which uses pulses of laser light to detect objects. He since has soured on radar, which uses radio waves to do the same thing.

Ford to offer EV versions of Explorer, Aviator, 'rugged SUVs' Ford Motor Co. on Wednesday said a new, dedicated EV architecture would underpin battery-electric versions of the Explorer and Lincoln Aviator crossovers as well as midsize pickups and "rugged SUVs" that will go into production within the decade.
The new vehicles are part of Ford's strategy to boost its EV offerings to 40 percent of sales globally by 2030 and were detailed at the company's Capital Markets Day for investors.

Shift magazine takes to the skies to examine the convergence of automotive and aerial technologies.

Speaking of which, Denso and Honeywell are teaming up on air taxi development.

Ford boosts electrification spending, expects 40 percent of global sales to be EVs by 2030.

Gerard Dwyer, who was Waymo's CFO, joined Rivian this week as vice president of business finance, according to a post on LinkedIn.

Why 4D radar is growing in popularity for automated driving systems.

Tesla has a contract to use lidar sensors from Luminar Technologies for testing and development, Bloomberg reports.

Uber, Lyft offering Americans free rides or discounts on trips to and from vaccination sites.

Kodiak Robotics is developing self-driving technology for vehicles on the flight line at Dover Air Force Base in Delaware.

"There are a multitude of opportunities to reduce carbon emissions with proven and widely available technologies. We should act on those opportunities without delay," writes Chris Reynolds, chief administrative officer, corporate resources, Toyota Motor North America.

Joel Johnson recorded from the back seat: “I should have been a little more freaked out, but I was mostly thinking of how good the video was going to be.”

When a self-driving car doesn't know what to do.

Recommended for You
No contest: EVs are cleaner than ever compared with gasoline counterparts
A return to road trips, air travel
Americans leery of sharing the road with self-driving vehicles