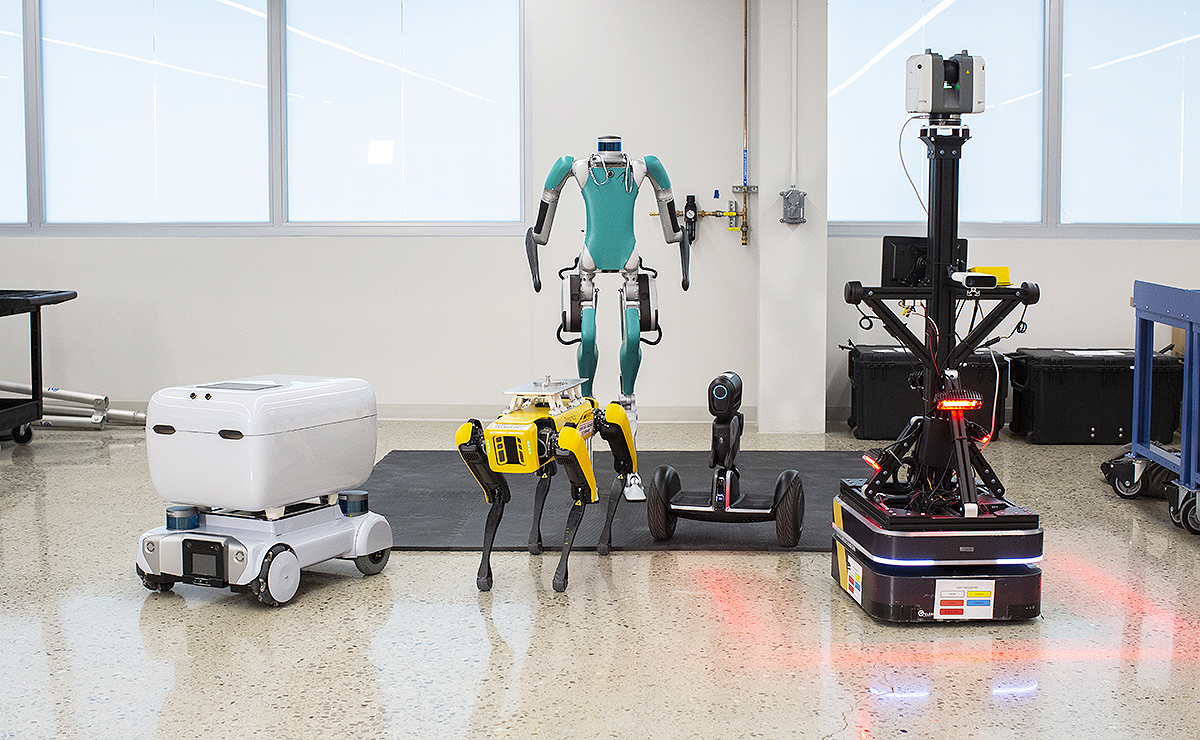 Digit and Fluffy have a new place to play.

Ford Motor Co., which has previously experimented with robots such as a biped package carrier named Digit and four-legged plant assistant called Fluffy, this week announced the opening of a four-story, $75 million robotics building in partnership with the University of Michigan. The 134,000-square-foot complex on the university's north campus in Ann Arbor features a three-story Fly Zone for drones, high-speed treadmills with obstacles, an outdoor robotics "playground" and an area called the Mars Yard, which mimics the red planet's surface so researchers can test rover and lander concepts.

"It's a Disneyland for robots," Mario Santillo, Ford's robotics research lead, told reporters. "All of this is because we're increasingly seeing robots do useful work for society. Our presence here, along with the University of Michigan, allows us to be on the leading edge of this trend."

The automaker said the new space will bring together academics currently spread across 23 buildings. Ford will occupy the building's fourth floor with about 100 research and development employees.

Ford officials said they will use the space to continue researching ways robots can interact with vehicles or aid workers at its manufacturing facilities.

"This is an integral part of our plan and playbook," said Ken Washington, Ford's chief technology officer. "What the market is teaching us is that we have to bring new services and experiences that customers feel like they can't live without. There's a huge opportunity to integrate robotic solutions in automation technology that we're bringing for both retail and commercial customers."

Utilities in South, Midwest to build more EV chargers As electric vehicles gain more of a presence on U.S. roads, energy companies are taking a crack at weaving networks of EV charging stations along highways. Six major energy companies that make up the Electric Highway Coalition are looking at how to do so from the Atlantic Coast, through the Midwest and South and down into the Gulf and Central Plains. This month, the coalition — which consists of American Electric Power, Dominion Energy, Duke Energy, Entergy Corp., Southern Co. and the Tennessee Valley Authority — said it wants to ramp up building EV fast chargers in its service regions.

State rules can make or break EV sales If you were to plot the distribution of electric vehicles on a U.S. map, the contrast would be stark. The West Coast tends to look more EV-heavy, with 9,734 EVs registered in Washington and 94,984 registered in California last year, according to Experian. In the Midwest, things look different: 3,922 EVs were registered in Michigan and 1,487 in Wisconsin last year. But this discrepancy isn't about specific geography and climate.

Honda to prep two EVs developed with GM, rededicate itself to hybrids.

VW aims for six battery cell plants in Europe by 2030.

Rivian Guides will have dual roles as concierge, quality watchdog.

Waymo's data is an important building block for a safer future.

Taking life on Mars for a spin
Sponsored Content: VIDEO: Ricardo CEO shares macro perspectives on EV strategy and trends for 2021 and beyond