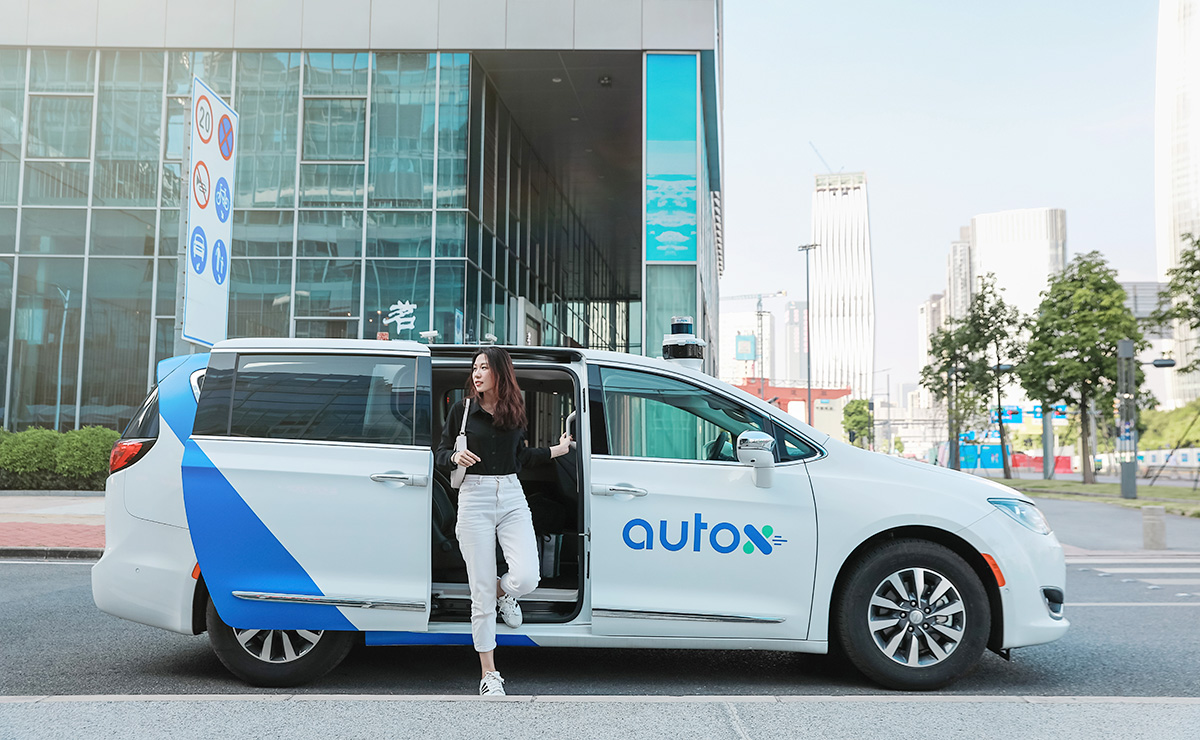 One of the emerging themes in the mobility world this year has been the deployment of a small number of completely driverless cars on public roads. Add 25 more to the list.

AutoX, a Chinese autonomous vehicle company backed by e-commerce giant Alibaba Group Holding, says it has put driverless robotaxis on the streets of downtown Shenzhen. According to the company, this is the first time in that nation's history an AV fleet has been deployed without safety drivers or remote operators providing backup.

The company revealed Wednesday evening that it had been conducting driverless "stress tests" in the city for half a year. It released photos of a fleet of modified Chrysler Pacificas and a video of a van making its way through the streets, changing lanes to avoid an illegally parked car, and yielding to pedestrians and bicyclists. At first the van is seen with zero occupants. Later it picks up passengers, a package, and even ferries a dog taking a solo ride.

An AutoX spokesperson told Automotive News the company has been conducting private trials in Shenzhen with passengers on board, but rides without safety drivers are not yet available to the public.

In an appearance on the Shift podcast in July, Xiao explained his preference for testing automated vehicles in busy urban centers, such as Shenzhen and Shanghai.

"They welcome technology; they are very tech-friendly, and they also have enough demand because those are like megacities. Shanghai is the largest city in China. Shenzhen is the city with the highest population density in China. Therefore, there's a huge demand for, for example, ride-hailing, as well as logistic operations."

AutoX is also conducting driverless public-road testing in the U.S. In July, California granted the company a permit to test one vehicle around its offices in San Jose. It can operate only in fair weather or light precipitation and is limited to 45 miles per hour.

AutoX was the third company to get California's permission to test without safety drivers. Waymo was first, obtaining its permit in 2018, followed by Nuro in April of this year. Zoox and Cruise got driverless testing permits in September and October.

Waymo's self-driving systems will be vetted at two new facilities As it readies its self-driving technology for operations across a wide swath of environments, Waymo will soon begin testing at two new dedicated proving grounds. The company said Tuesday it has partnered with the Transportation Research Center in East Liberty, Ohio, to establish a physical environment where it can test edge-case scenarios in an area that models dense, urban driving. Edge cases are driving situations that are extreme or rarely occur. Meanwhile, Waymo has leased a test track in Menlo Park, Calif., where it will focus on component testing for heavy-duty trucks.

Luminar Technologies becomes public company Luminar Technologies Inc. started trading as a public company on Thursday under the ticker symbol LAZR, marking the second Silicon Valley firm to go public while working to deliver a key sensor for self-driving cars. Luminar makes a lidar sensor, which helps give vehicles a three-dimensional view of the road. It became public through a merger with Gores Metropoulos Inc., a special-purpose acquisition company, a shell company that uses proceeds from an IPO to acquire a private company, typically within two years. For companies such as Luminar, which raised $590 million from the merger, SPACs have become an alternative path to public markets instead of a traditional IPO.

Alliance releases 4-year guide for U.S. policies on AVs The Alliance for Automotive Innovation on Wednesday released a four-year action plan to guide federal policies and advance the testing and deployment of automated vehicles in the U.S. The auto trade group's AV policy road map makes 14 recommendations under three pillars that "reform regulations to allow for AV deployment at scale, harmonize federal, state and international policies and lay the foundation to achieve longer term objectives."

The e-GMP architecture will underpin the automaker’s push to sell 1 million electric vehicles worldwide by 2025.

Tesla could widen release of 'self-driving' software in two weeks.

Volvo could be electric-only by 2030, CEO says.

On Monday, GM and Nikola announced a reworked, smaller agreement that keeps the fuel-cell partnership intact but eliminates an equity stake in the startup for the Detroit automaker as well as plans for building Nikola's electric pickup.

How to break through the fuel cell cost barrier.