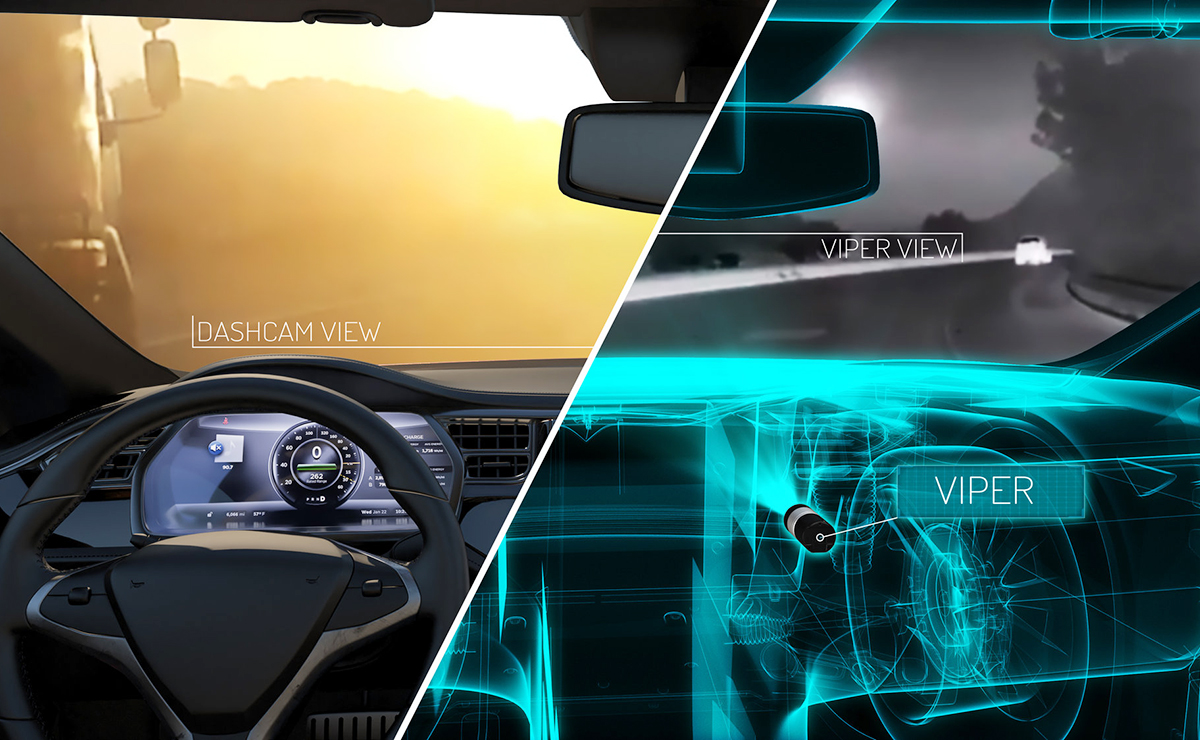 Radar, lidar and cameras are the technologies commonly used to ensure autonomous vehicles can accurately navigate and position themselves within their environment.

But Raz Peleg, director of sales for AdaSky, says thermal imaging — using far-infrared technology — is the key to the success of AVs.

The 3-year-old Israeli startup's Viper system detects the thermal energy that radiates from other vehicles, people, animals, infrastructure and more, from 300 to 400 yards away.

In Detroit on Monday, Peleg demonstrated the high-resolution thermal sensor, which he says can be less costly and consume less energy than other AV sensors.

"It's about time the industry shifts from prototype to production," Peleg said.

Thermal imaging has long been associated with the aviation and defense industries. AdaSky CEO Yakov Shaharabani has experience developing thermal cameras for civilian and military uses. The startup's technology differs from these techniques, however, because it doesn't require recalibration and reset time.

Companies such as Boston startup WaveSense focus on subterranean radar sensing to compensate for unpredictable lane markings or changing weather conditions. Ground-penetrating technologies can improve the sensor suite for AVs.

But unlike some technologies, thermal imaging is not challenged by the weather and issues with lighting visibility, according to a recent pedestrian detection study conducted by motoring organization AAA.

And despite perceptions, it's not solely "night vision" technology .

AdaSky says its product also can be integrated into ADAS, or advanced driver assistance systems, hence the first four letters of the startup's name. The company says that in 2020, its technology will be available in a production vehicle made by a North American automaker.

AdaSky received $20 million from South Korean automotive components manufacturer Sungwoo Hitech in 2018 as part of a larger funding round.

It also announced a partnership with auto supplier Magneti Marelli at CES last year to integrate its far-infrared sensor into smart headlights.

An attendee sits on a Harley-Davidson LiveWire electric motorcycle at this year's CES.

EV hopefuls' setbacks are just a harsh reality, experts say A few younger players in the electric-vehicle space, among them Faraday Future, Harley-Davidson Motor Co. and Dyson, have faced some setbacks lately. But experts say the recent developments are unlikely to become a resounding trend throughout the EV movement. The less established contenders are simply realizing the barriers to entry in the electric space. PHOTO: BLOOMBERG

Can Toyota catch up in battery-electric game? In 2016 Toyota was already late to the global EV game. Today, the company still doesn't have a pure battery EV on sale anywhere in the world. But that's about to change in a big way. Toyota has been quietly at work for three years, methodically engineering not merely an electric car, but a comprehensive plan to catch up and become competitive. Now the automaker, buoyed by its $10 billion r&d war chest, is poised to put the plan into action and make up for lost time.

Volvo plans flagship EV for S.C. Volvo Cars will create an electric version of its next XC90 and build it at its plant near Charleston, S.C., in 2022, CEO Hakan Samuelsson told Automotive News. It will be the first electric Volvo to be American made and is expected to be the brand's third battery-powered model. Starting as soon as the second quarter of 2022, the plant will become the global production center for the third-generation XC90 flagship crossover.

Industry's path to electrification jolts supplier innovation New solutions are emerging in battery safety, performance and thermal management. In some cases, suppliers are reaching beyond their traditional expertise to carve out roles in the realm of battery components. Several were on display at last month's Battery Show, a three-day expo of more than 700 companies in suburban Detroit.

PSA Group will roll out battery-electric versions of its small commercial vans next year.

Futuristic door handles are being blamed for the death of a man whose Tesla Model S crashed. A police officer was unable to pull the man from the burning car.

General Motors Co. plans to build a new family of premium electric pickups and SUVs at its Detroit-Hamtramck plant beginning in late 2021, possibly reviving the imposing Hummer brand on some of them, several people familiar with the plans told Reuters.

Penske Corp. is trying its hand at a short-term rental program, despite a recent exodus from the business model by several large auto companies.

Mazda's first mass-production electric vehicle will be a compact crossover called the MX-30 with suicide doors and a toned-down slit for a grille.

Lexus shows off its LF-30 Electrified concept in Tokyo.

Nissan's Ariya concept foreshadows the range of EVs to be built on the platform co-developed by Renault.

"In the next 10 years, the bulk of the business will be from driver assistance," Continental CEO Elmar Degenhart tells Automotive News Europe.

Chicago Mayor Lori Lightfoot announces a plan that would raise the cost of a trip via Uber or Lyft as much as $2.28 above what's now paid in city taxes.

Fiat Chrysler Automobiles will build a new battery assembly complex in its Mirafiori plant in Turin with an initial investment of $56 million.

Automakers should not try launching their own ride-hailing networks to compete with Uber and Lyft, say Rich Alton of the Clayton Christensen Institute and Chandrasekar Iyer of Tata Consultancy Services. "Unfortunately, taking on the ride-hailing giants will be an expensive battle that will entail bleeding red ink for years," they write.

PBS delves into the many challenges that must be overcome on the path to a self-driving future in a new "NOVA" episode, "Look Who's Driving," which premiered Wednesday, Oct. 23. The documentary investigates "how driverless cars work, how they may change the way we live, and whether we will ever be able to entrust them with our lives."

Recommended for You
Amid COVID-19, cities find new ways to update road rules