That was what it took for Porsche just to secure building and regulatory permits before it could begin construction of its first all-electric vehicle. And it symbolizes the hurdle the German sports car maker had to clear to create one of the most ambitious cars in its history.

The Porsche Taycan EV is an engineering feat — a cleaner, quieter reincarnation of the Porsche 911 that delivers up to 750 hp and moves from 0 to 60 mph in 2.6 seconds.

But equally remarkable is where and how the car is manufactured.

Rather than take an easy route and assemble the Taycan on cheap rural land far from the tidy little neighborhood in congested Stuttgart, Porsche chose to squeeze it into its cramped 152-acre Zuffenhausen campus, a warren of brick and concrete structures that is home to the sports car maker's headquarters and the factory that turns out its flagship 911.

To do that, Porsche planners essentially constructed a factory within a factory in this tightly packed industrial and residential neighborhood.

The decision to spend more than $770 million in old Zuffenhausen on what is arguably Porsche's future was more about symbolism than economics.

"If you decided in a commercial way, you don't decide for Zuffenhausen, because it's expensive here to build a facility to produce a car in this way," Porsche production and logistics boss Albrecht Reimold told Automotive News at the plant's official opening here last week.

"But the heart and soul of this brand is here in Zuffenhausen, because it was the birthplace of the 356 and the 911," Reimold said. "Now, this new model, the Taycan, is another icon in the future." 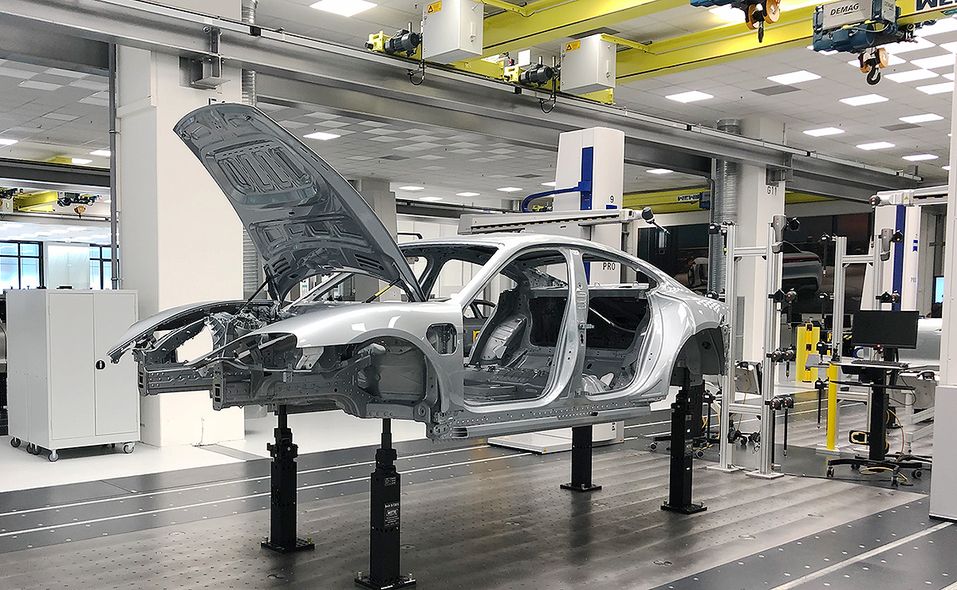 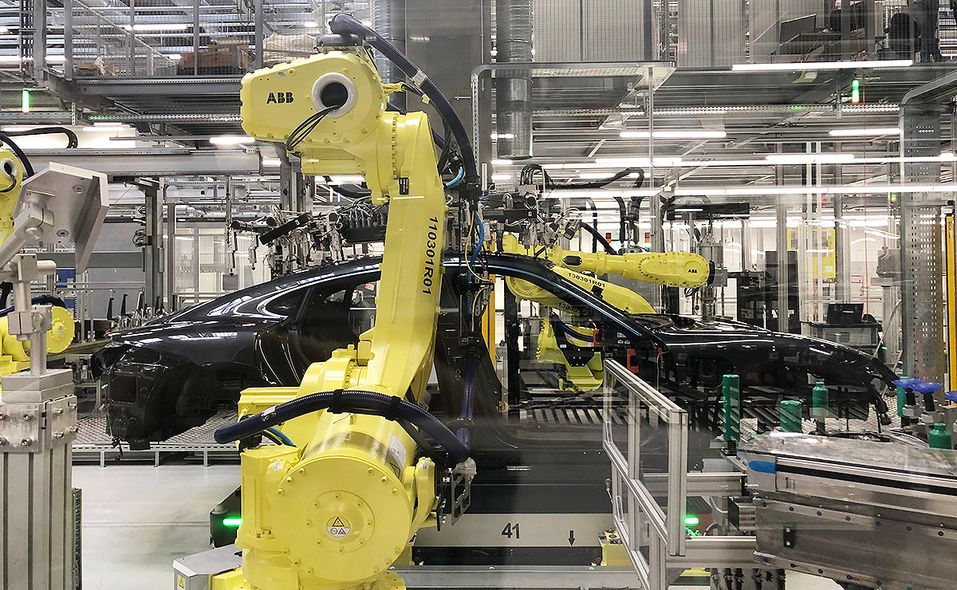 More than 350 robots put the Taycan body together 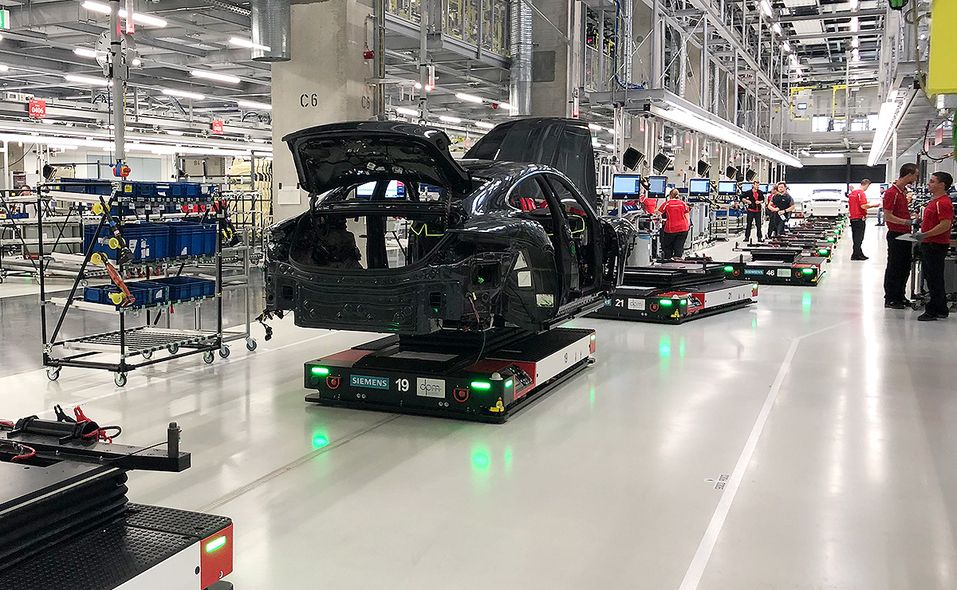 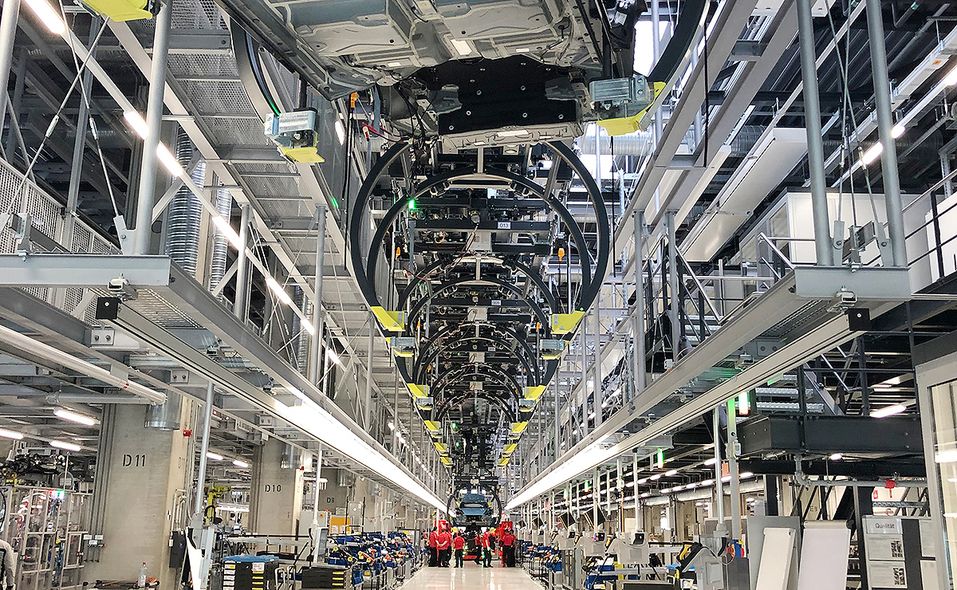 Undercarriages being transported via rotatable and height adjustable vehicle hangers 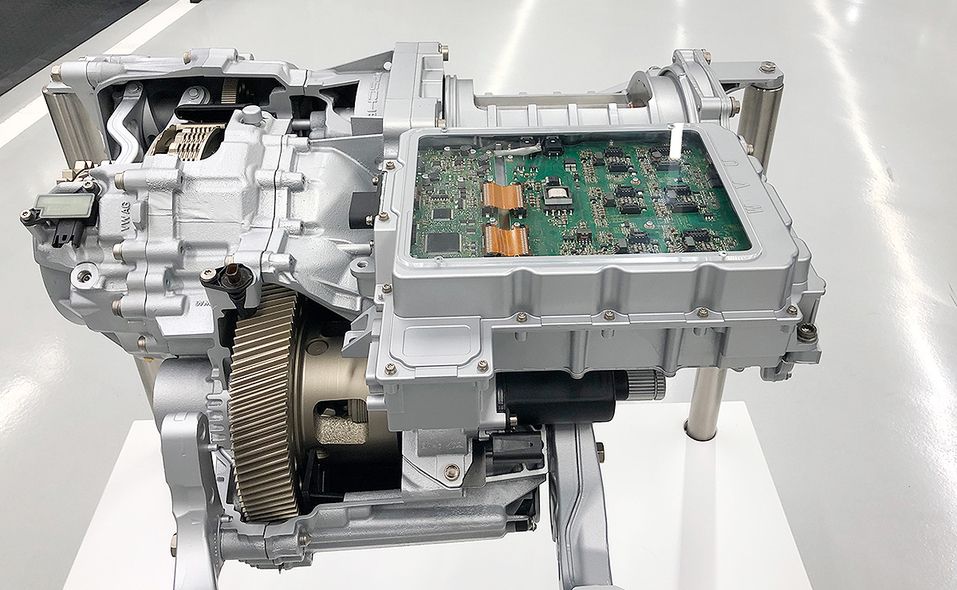 The top Taycan models have a permanently excited synchronous motor on each axle. 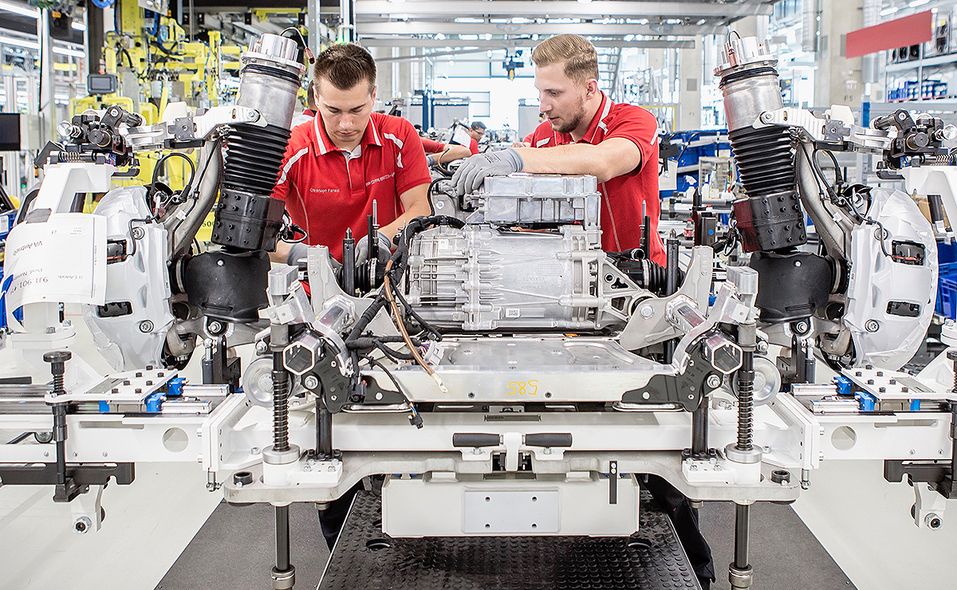 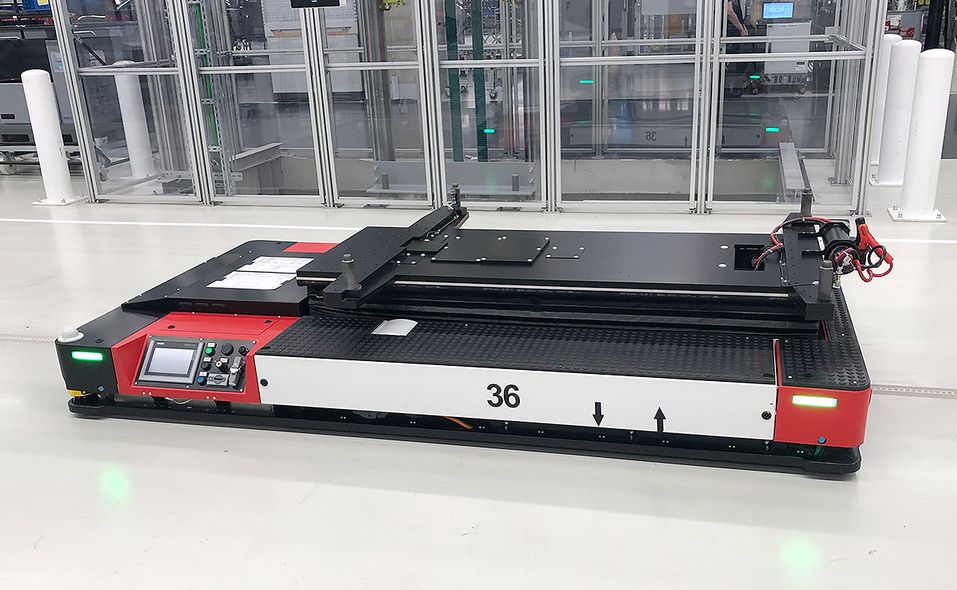 Porsche ditched the rigid assembly line in favor of a "flexi-line" that uses height-adjustable AGVs to ferry vehicle bodies and drivetrains. 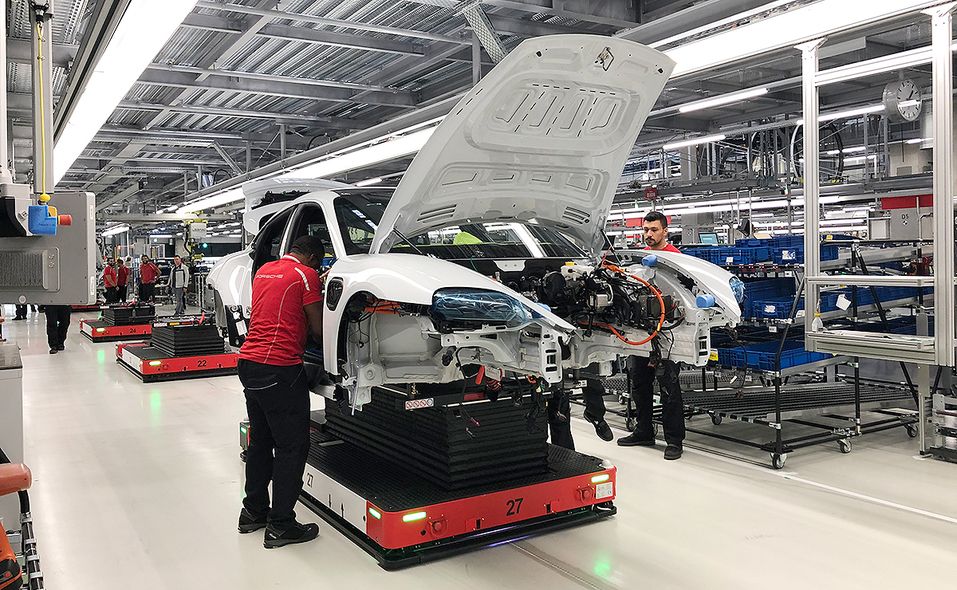 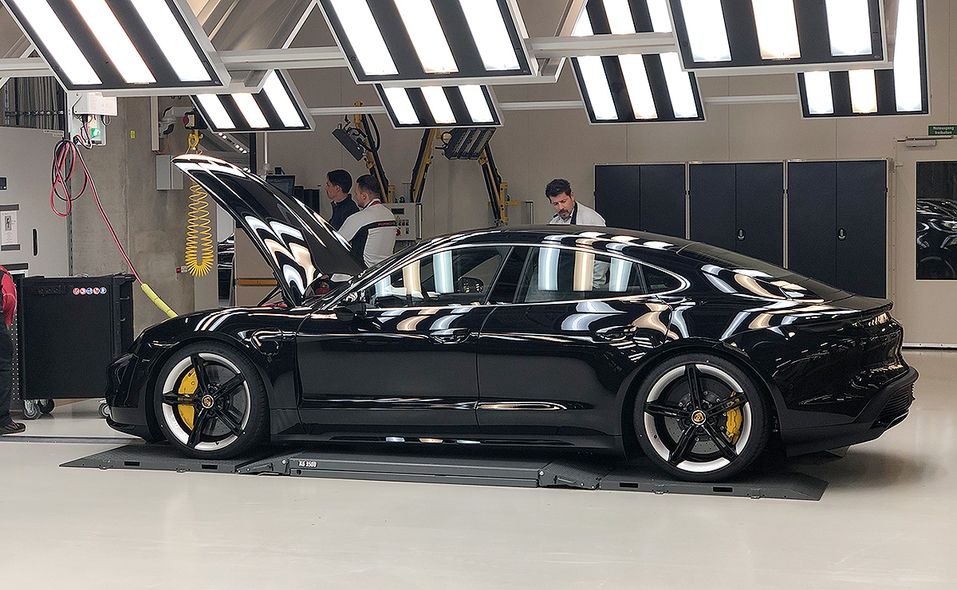 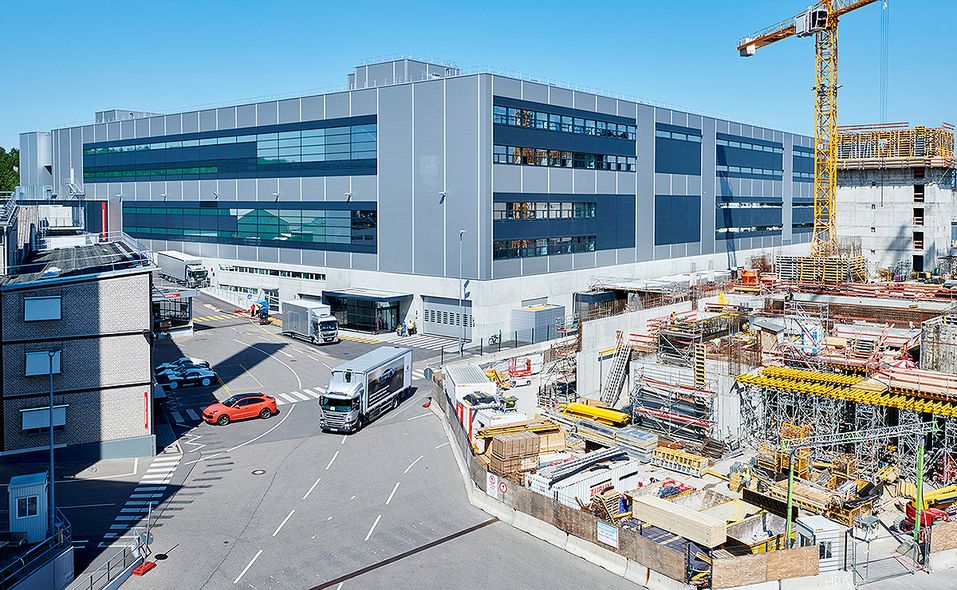 Final assembly occurs in a more than 667,000-square-foot building.

Locating production in Zuffenhausen meant Porsche could not build the Taycan under a single roof. Instead, production is scattered across the campus, in settings totaling more than 1.8 million square feet.

Nearly four years of construction had to be undertaken without disrupting Zuffenhausen's residents and businesses, not to mention Porsche's daily output of 250 sports cars — the 911 and two-door 718.

The project involved not only getting buy-in from Stuttgart city planners, but also from Porsche's neighbors.

Residents objected to the frantic pace of construction, which began each day at 6 a.m. and didn't end until 10 p.m.

"It was not easy for our neighbors," Reimold said.

The inside of the assembly plant is as futuristic as the car built there. Porsche ditched the conventional rigid assembly line in favor of a "flexi-line" that uses driverless skates, or automated guided vehicles, to transport vehicle bodies and drivetrains silently between workstations.

The AGV system was 30 to 40 percent less expensive to create than a comparable conveyor-based assembly line, since it didn't require concrete pits or reinforced floors.

The flexi-line also gives Porsche a more adaptable and flexible production system. The AGVs, guided via magnets in the floor, can move at 3 to 66 feet a minute, allowing the assembly line to move at different rates. If more time is needed on a vehicle, the AGVs can be pulled aside without halting the assembly process.

On the other side of the Zuffenhausen campus, the Taycan's high-strength, lightweight steel-and-aluminum body is put together by a hive of hissing and whirring yolk-yellow robots. Elsewhere, the Taycan's whisper-quiet electric motors and two-gear transmissions are built alongside throaty V-8 engines that power the Panamera sedan and Cayenne crossover.

Porsche chose to squeeze the factory into its cramped 152-acre Zuffenhausen campus.

But even as the first Taycans roll out of final assembly, more capacity is under construction nearby. Early interest in the car has led Porsche to reconsider its initial production plan of about 20,000 vehicles a year. Reimold said the factory could add a third shift, and a 10 to 20 percent production increase is possible.

While built for the Taycan model range, which will include a crossover in 2021, the factory could one day churn out sedans and crossovers for Porsche parent Volkswagen's other performance brands.

Porsche will share the plant's manufacturing processes and technologies with other Volkswagen brands, said Bernd Würsching, director of assembly for the Taycan model line.

"Volkswagen wants to examine the benefits and the challenges," Würsching said. "How robust they are."