July 17, 2022 02:00 PM
Richard Truett
Print
AUTOMOTIVE NEWS ILLUSTRATION
Eric Magenheimer of GKN Additive holds a seal made by 3D printing for the 2022 Chevrolet Tahoe, top left. When engineers made a last-minute design change to the tailgate-mounted spoiler, General Motors needed a fast solution to keep the launch on track.

Production of the 2022 Chevrolet Tahoe was about to begin late last summer in Arlington, Texas, when engineers made a last-minute design change to the tailgate-mounted spoiler.

The move threatened to choke off the supply of the SUV just when dealers needed it most. With just 26 days' worth of all Chevy vehicles on hand, a potential 12-week Tahoe delay for new parts would have been brutal for dealers to endure.

They didn't have to, thanks to a scrappy General Motors engineer in Michigan named Christine Bardsley. She leveraged GM's multibillion-dollar investment in additive manufacturing technology — 3D printing — to keep the Tahoe launch on track.

Some key manufacturers of 3D printers used by the auto industry:

She also inadvertently put GM in the history books with what appears to be the automotive industry's biggest order to date for a 3D-printed part.

The episode underscores how automakers and suppliers are using additive manufacturing to work around the supply chain disruptions and labor shortages roiling the industry.

As an industry, global automakers and suppliers are spending big time on 3D printers and processing equipment, more than $1 billion per year. Analysts peg the growth rate of auto industry purchases of additive manufacturing equipment at more than 20 percent per year until the end of the decade, as automakers turn to 3D printing for rapid prototyping, lightweighting and production of a growing number of parts.

The upcoming low-volume, hand-built Cadillac Celestiq, for example, will have more than a hundred 3D-printed structural and cosmetic parts made of metal, plastic and other materials.

But 3D printing for high-volume vehicles is not far off, experts say.

"In automotive applications, we have heard of plans of OEMs using additive manufacturing as the primary method for certain parts as early as 2023," said Tom Kelly, CEO of Automation Alley, which promotes public-private manufacturing partnerships in the Detroit area.

Brett Smith, director of technology at the Center for Automotive Research in Ann Arbor, Mich., said, "Many companies were slow to implement additive technologies before the pandemic. But they've had to make a choice to keep their lines moving. Previously, they wouldn't make the choice because they didn't have to. Now, they are saying full speed ahead."

And Ric Fulop, CEO of Desktop Metal in Burlington, Mass., one of the industry's largest manufacturers of binder jet printers — which build an object layer by layer using a binding material between the layers — says the next product cycle will usher in much more 3D-printed content.

"Today's supply chain and labor challenges have only amplified the trend toward 3D printing," said Fulop, whose company's printers are in use by automakers and suppliers throughout the industry. "We are heavily engaged with eight of the top 10 vehicle manufacturers across metals, polymers and our revolutionary 3D-printed foam technologies."

He estimates there's roughly 570 pounds of content on today's passenger vehicles that can be 3D-printed.

Suppliers and automakers traditionally make parts by stamping, casting or molding. Those processes require tooling to produce the parts. It's an efficient and cost-effective method, but the drawback is the long lead time. Most tooling is made overseas, and once a design is locked in, it can take months for a tool to be delivered, and then it has to be installed and tested. Design changes often require new tooling. Additive manufacturing is far more nimble, and most changes are made in the computer program used to print the part.

Engineers working on the Tahoe changed the design of the spoiler on the upper part of the vehicle's tailgate to ensure the large SUV met its fuel economy certification numbers if tested by the EPA. The revamped spoiler required a new part, what GM calls a closeout seal. The rubberlike components mount at each end of the spoiler, just above the tailgate.

The part is normally made in a process called injection molding. But a new injection-molded closeout seal, GM learned, would take a minimum of 12 weeks to produce.

Bardsley, the design release engineer for the closeout seal, worked with engineers in two GM labs at the company's sprawling Global Technical Center in Warren, Mich. First, the Additive Innovation Lab 3D-printed a few closeout seals to test whether a 3D-made version of the part could meet the automaker's quality and appearance standards.

"We were able to get some seals pretty quickly for preliminary testing. We wanted to as closely as possible replicate the injection-molded seal," Bardsley said.

With the early seals showing promise, GM's Additive Industrialization Center made the next iteration of the seal out of the production-intent material to determine whether it could be produced in high volume. Bardsley held samples of the second iteration in her hand in just two days. From there, GM solicited bids from suppliers to make the part.

The job went to GKN Forecast 3D, a Carlsbad, Calif., outfit that is part of GKN Additive.

"We had the right technology and the right capabilities at the right time to help out with this particular problem," John Dulchinos, president of GKN Additive, told Automotive News.

GKN invested in additive manufacturing machines that use a form of binder jet printing, which can make many parts at one time. 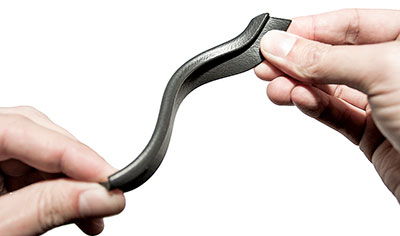 "It was not trivial when GM came to us. Thirty thousand vehicles were going to need 60,000 seals," Dulchinos said. "They were just starting to ramp up production, which meant those 30,000 vehicles would be sitting in a lot somewhere waiting for the parts. You can imagine the capital tied up with that."

As for the seal, he said: "It needed to be a finished part that had the right level of smoothness and dimensional tolerances. All of that required some effort to figure out."

The GKN Forecast 3D team knew they could deliver the seals on time — if the company could get its own suppliers on board. GM needed the seals in six weeks, Dulchinos said.

After a couple of weeks of setup, prep work and final testing, GKN had as many as six printers running 24/7 until all 60,000 seals were made. Production lasted about three weeks.

Bardsley, the GM engineer, said that if a GKN 3D-printed seal and an injection-molded seal were placed in front of her, she probably would not be able to tell the difference.

"I am used to working with injection-molded plastic. So you know when you kick off a tool and you are waiting weeks and weeks or months," Bardsley said. "So just being able to get something implemented within six weeks is something I've never experienced before. If we run into a situation like this again in the future, additive [manufacturing] can come into play."

During the pandemic shutdown, many companies realized additive manufacturing to make tooling could save time and money, said Smith, the CAR analyst.

Some of those issues from 2020 still linger.

In late May, Tesla CEO Elon Musk blamed battery cell tooling stuck in a Chinese port because of pandemic lockdowns for hampering production and turning his plants into "money furnaces" that were burning through billions of dollars.

Product development engineers at suppliers and automakers, especially those working on electric vehicles, are turning to additive manufacturing for lightweighting and fast prototyping and increasingly for making the tooling used to build parts the traditional way. Some of the production tooling for the Celestiq, for example, will be 3D-printed, GM says, along with parts.

3D printing for high-volume vehicles is not far off, experts say. Here, BMW uses the method for engine parts.

Though 3D printers are becoming faster and more flexible, they are still mostly being used for low-volume applications and often for cosmetic or trim parts and emergency runs of volume parts, such as the Tahoe closeout seal. 3D-printed parts are usually more expensive to produce.

"A lot of companies have been fairly comfortable using additive for tooling. The bigger step comes when you put it into volume production," Smith said. "Cost is always a pressure point for this industry, and it is going to be even more so, considering the expense of vehicles."

Ali Shabbir, a GM engineering group manager for additive design and manufacturing, says 3D printing is still years away from producing parts at high volumes and competitive prices, but the technology is moving fast. "The changes in the eight years or so that I have been part of the industry have been exponential," he said. "Obviously, on the scale that we produce full-sized trucks and SUVs, additive manufacturing would not make sense."

CAM Logic Inc., an Auburn Hills, Mich., company that specializes in manufacturing and engineering for mass production, has seen its portfolio of 3D business grow since the pandemic. That growth is expected to accelerate as additive manufacturing technology improves, says Vice President Angelo Biondo.

"Everybody — automotive, aerospace, doesn't matter — everybody is still chasing quality parts, cut-down lead times and parts that are cost-effective. And additive really plays in all three of those areas. But it also helps develop a cleaner part because there is not a lot of waste." 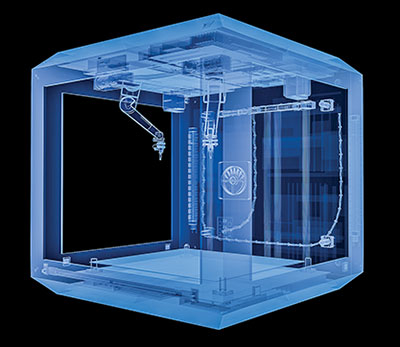 3D printing, also known as additive manufacturing, is a process of making solid objects from a digital file. An object is created by laying down successive layers of material. Each of these layers can be seen as a thinly sliced cross section of the object. 3D printing is the opposite of subtractive manufacturing, which uses machines to cut or hollow out a solid piece of metal or plastic. 3D printing enables production of complex shapes using less material than traditional manufacturing methods.
Source: 3DPrinting.com

Just before the pandemic, CAM Logic designed and 3D-printed a carbon-fiber production manufacturing tool that enabled one of Detroit's automakers to safely move a heavy stamped steel part off the production line at one of its plants. The company made the tool faster than if it would have been cast or stamped.

At Azoth 3D Inc., a growing 12-person shop in Ann Arbor, business is booming. The company has produced 3D-printed gear shift knobs for low-volume vehicles and has about 30 other interior parts scheduled to be 3D-printed for production vehicles, says Cody Cochran, general manager.

Those parts include buttons, knobs and high-gloss trim parts. The company has contracts for safety-critical and under-hood components that will be made by binder jet printers.

And Azoth has booked another chunk of business: making emergency repair parts for production machinery used by auto suppliers.

"We've been working with a lot of Tier 1 automotive suppliers, where they are making CV joints and parts for engines and transmissions. They have utilized our metal 3D printing and our polymer 3D printing to keep their machines running. Gripper fingers, tooling for jig fixtures, we've made a lot of indirect materials to keep machines running."