Protestors, demanding anything from the end of vaccine mandates to the ousting of Canadian Prime Minister Justin Trudeau, brought traffic onto and off the Ambassador Bridge to a standstill Monday evening.

Automakers have cut production in the U.S. and Canda and warn deliveries of new vehicles to dealerships will be delayed due to an ongoing blockade at one of North America's busiest land border crossings.

Protestors, demanding anything from the end of vaccine mandates to the ousting of Canadian Prime Minister Justin Trudeau, brought traffic onto and off the Ambassador Bridge to a standstill Monday evening in Windsor, Ontario, and refuse to budge until certain public health measures, such as vaccine mandates, designed to curb the spread of COVID-19, are rescinded.

Canadian production has been disrupted for the last two days, but now U.S. production is feeling the pain as well.

General Motors said it canceled production at its Lansing Delta Township assembly plant on Wednesday evening and Thursday morning because of a parts shortage caused by the blockade.

GM said no other U.S. shifts have been canceled. Lansing Delta Township builds the Chevrolet Traverse and Buick Enclave crossovers. More than 2,000 hourly employees, represented by UAW Local 652, work at the plant.

Toyota Motor Corp. on Thursday said its plants in Kentucky and in Ontario have been impacted.

“Due to a number of supply chain, severe weatherand COVID related challenges, Toyota continues to face shortages affecting production at our North American plants," the automaker said in a statement.

"We expect disruptions through the weekend, and we’ll continue to make adjustments as needed. While the situation is fluid and changes frequently, we do not anticipate any impact to employment at this time.”

Toyota said on Wednesday it did not expect its auto plants in Ontario to produce vehicles for the rest of the week. Toyota builds the RAV4 model and its hybrid version as well as the Lexus RX 350 and the RX 450h at its Ontario plants.

Stellantis confirmed on Thursday morning that it had to shorten a number of shifts at its Windsor and Brampton plants Tuesday and Wednesday due to parts shortages. The plant was running Thursday morning.

"The situation at the Ambassador Bridge, combined with an already fragile supply chain, will bring further hardship to people and industries still struggling to recover from the COVID-19 pandemic," the company said in a statement Thursday morning. "We continue to work closely with our carriers to get parts into the plants to mitigate further disruptions.

"We hope a resolution can be reached soon so our plants and our employees can return to normal operations.

Unifor Local 200 President John D'Agnolo said Ford Canada idled engine assembly operations in Windsor on Wednesday, but that "we will be running [Thursday]."

Ford Motor Co. said the interruption hurt production at some of the second-largest U.S. automaker's plants in Canada.

"While we continue to ship our current engine inventory to support our U.S. plants, we are running our plants at a reduced schedule today in Oakville (Ontario) and our Windsor engine plant is down," Ford spokesman Said Deep said. "We hope this situation is resolved quickly because it could have widespread impact on all automakers in the U.S. and Canada."

"I can confirm that production has been affected at Ford, GM and Stellantis," Kingston said Thursday morning. These blockades are now impacting thousands of jobs."

Kingston said in a statement Wednesday: “The time has come for our governments at all levels to enforce their laws, end the blockades and restore the cross-border trade.” 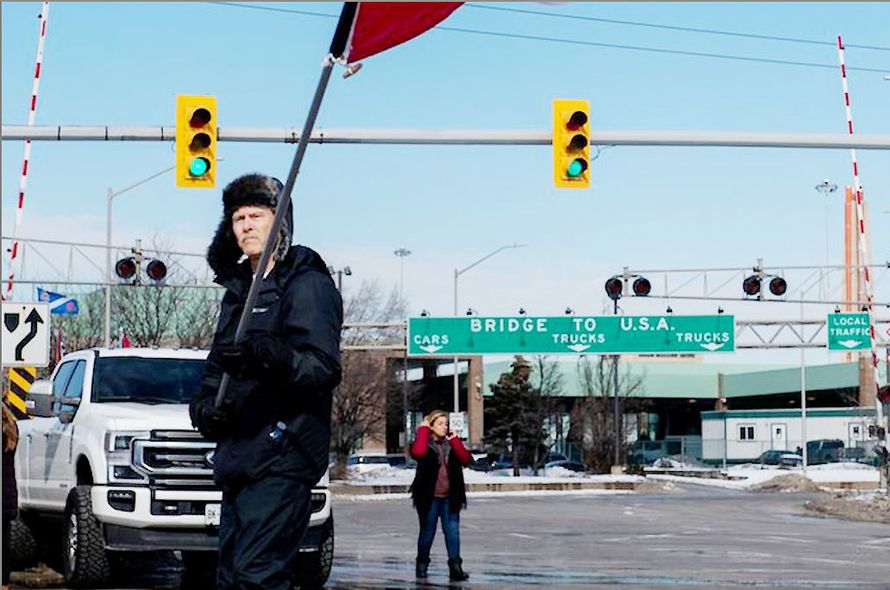 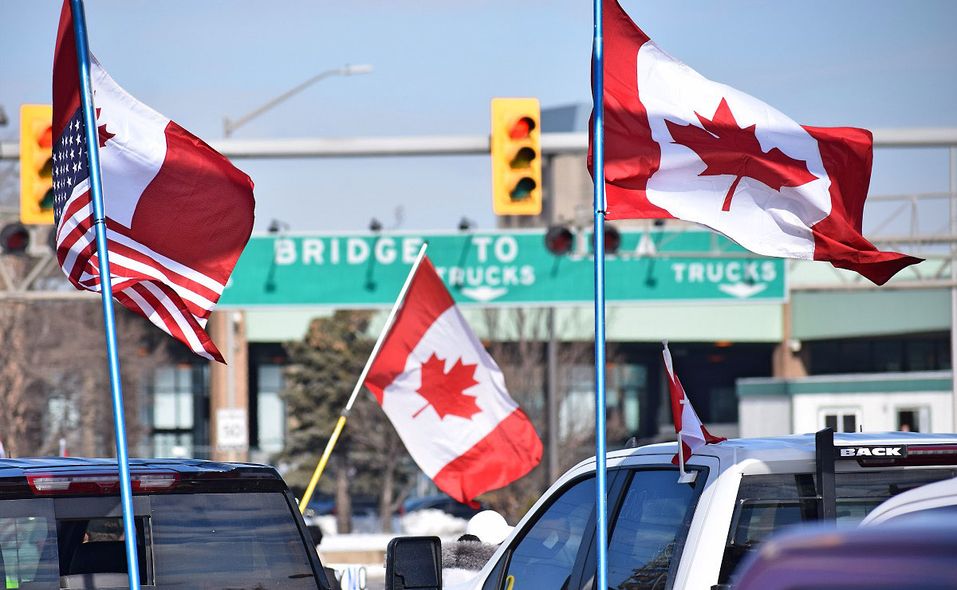 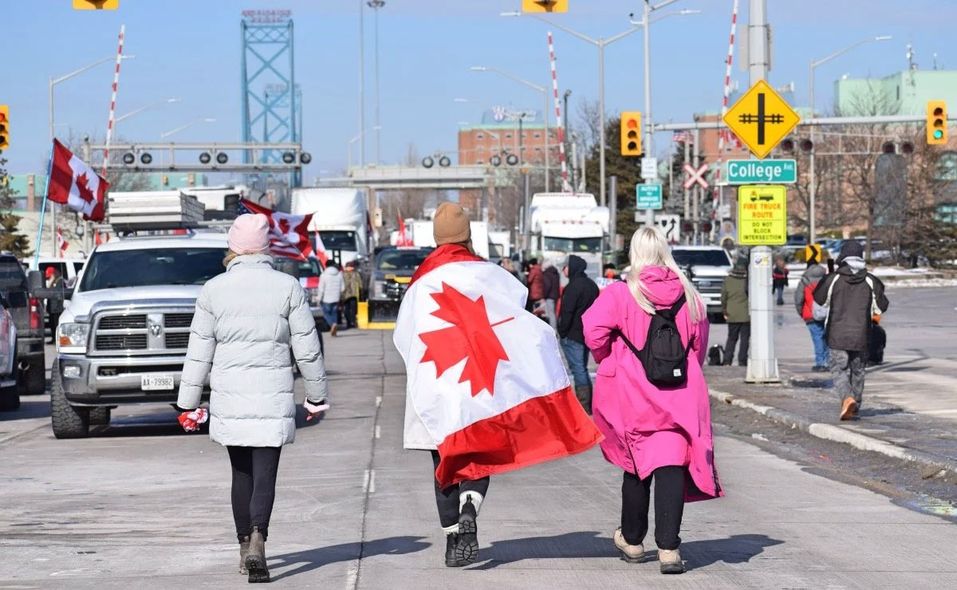 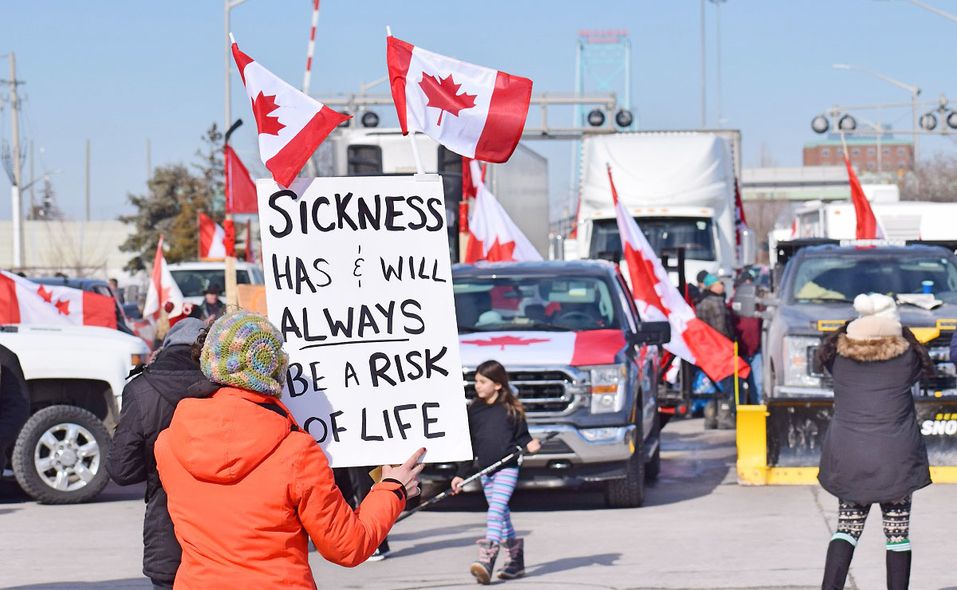 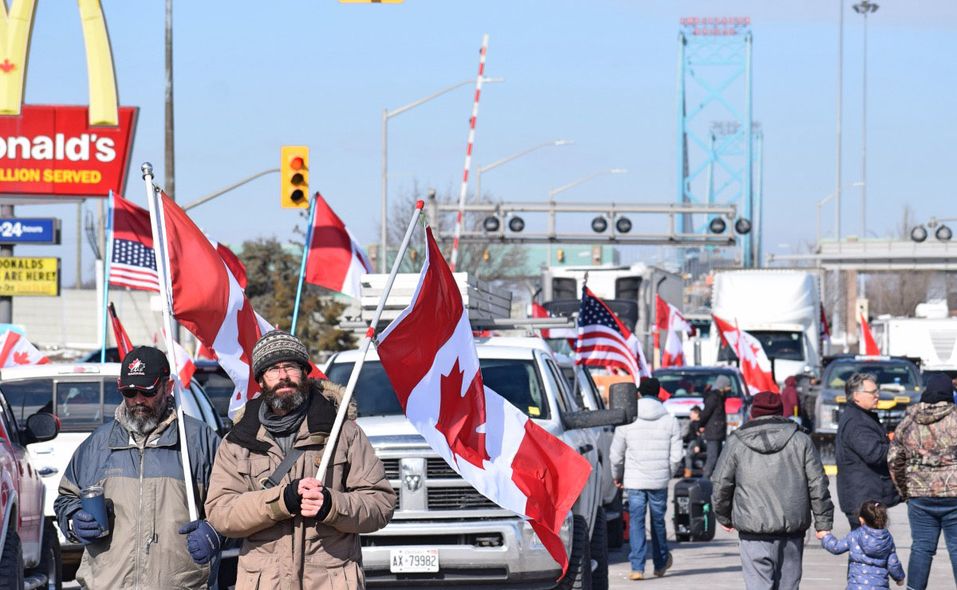 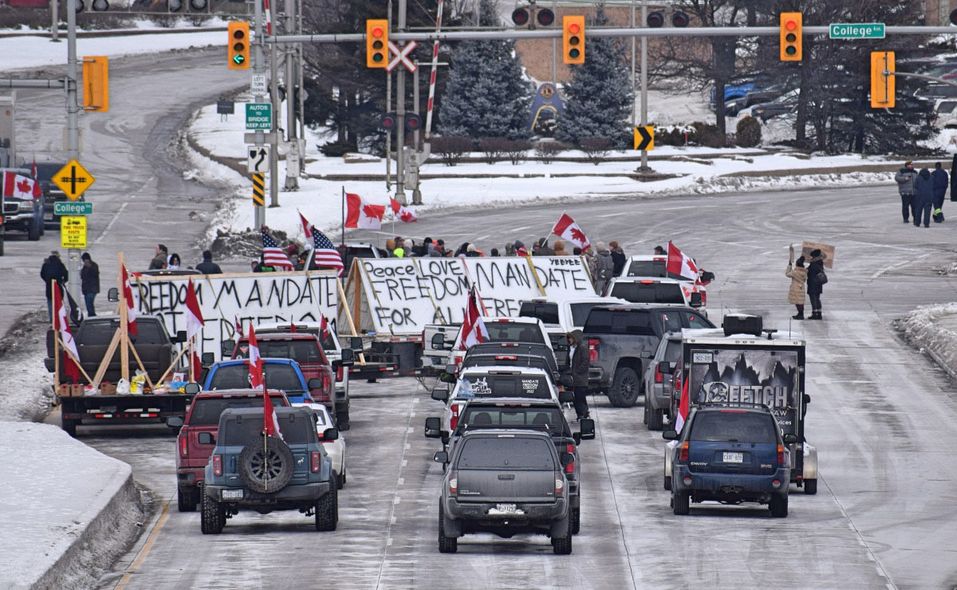 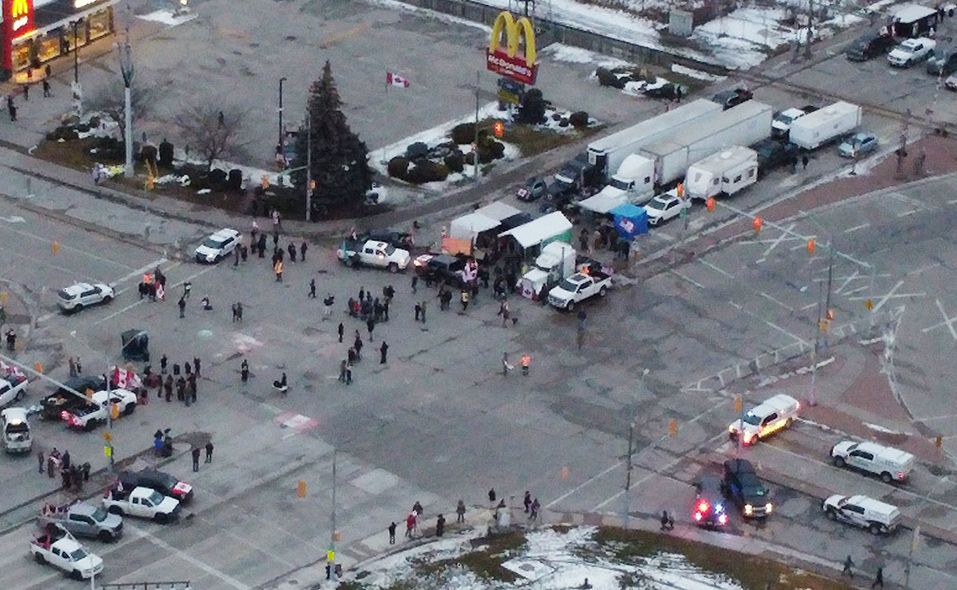 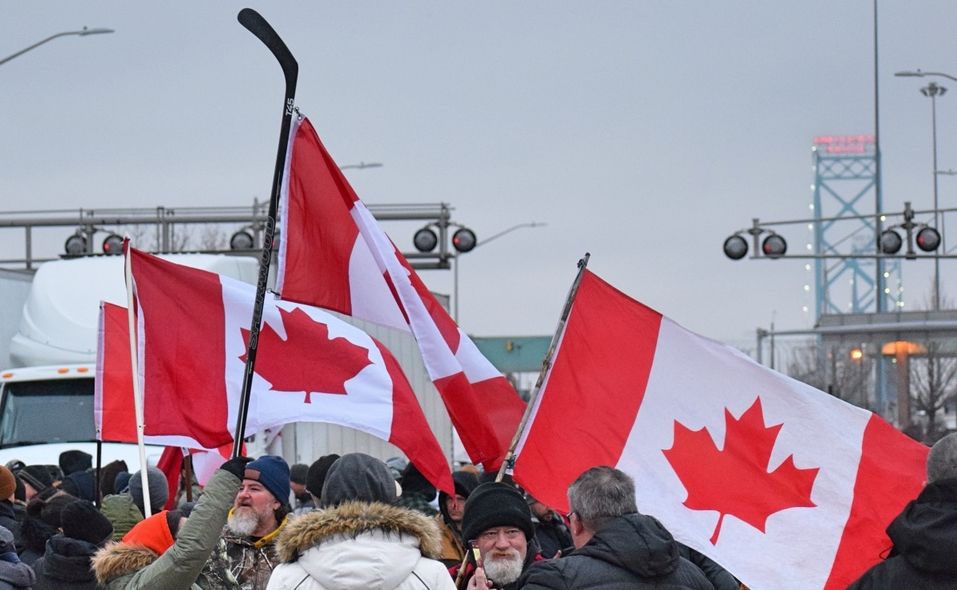 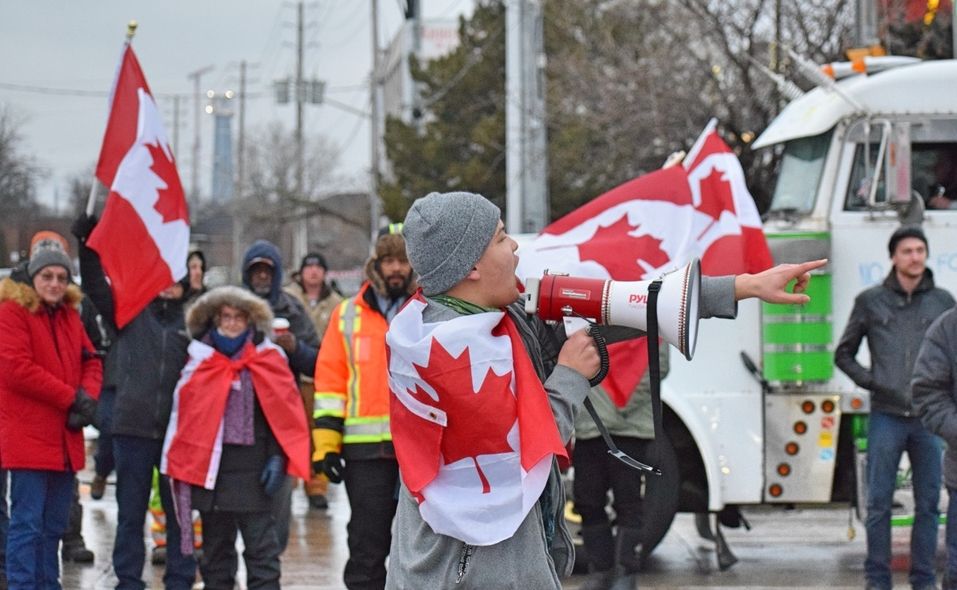 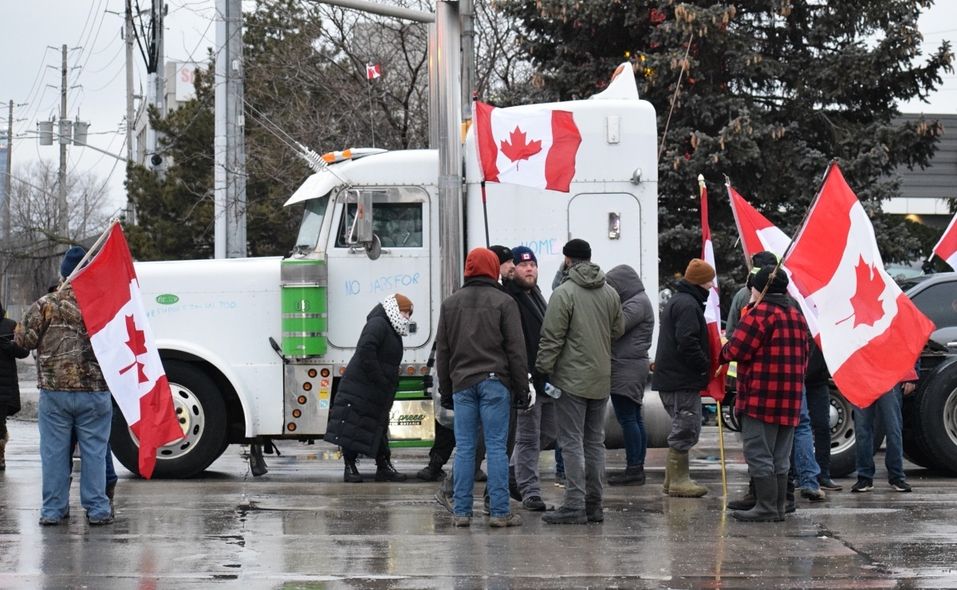 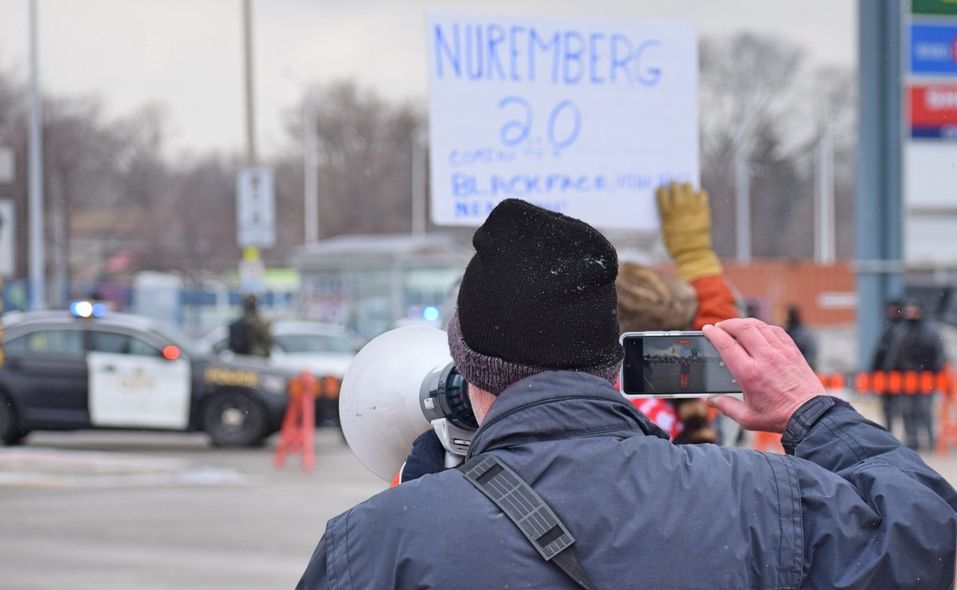 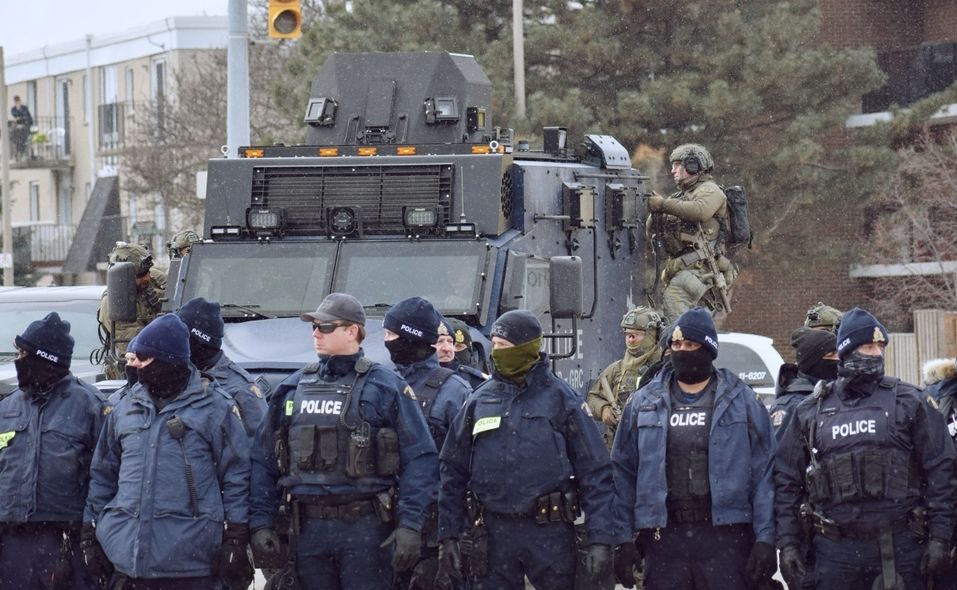 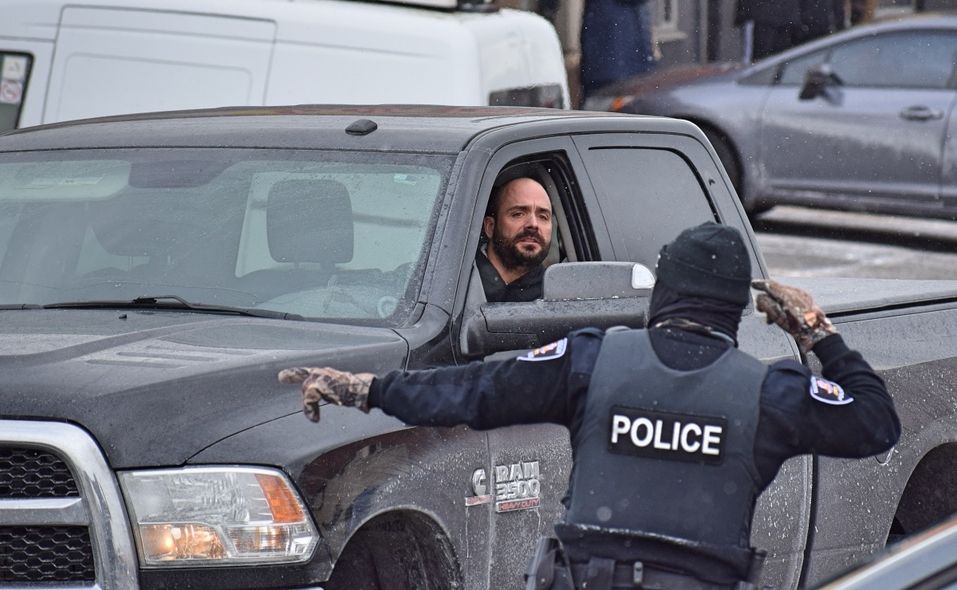 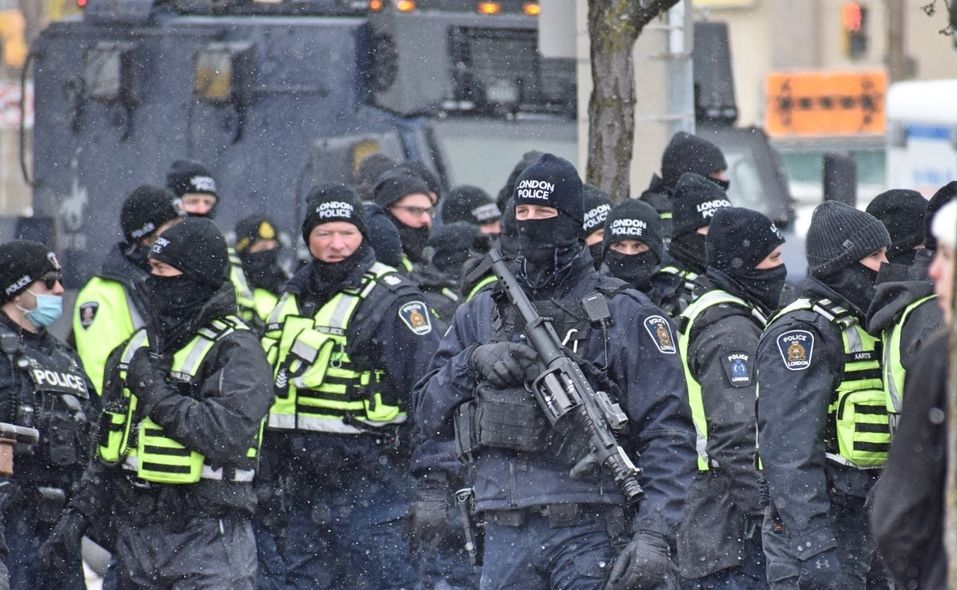 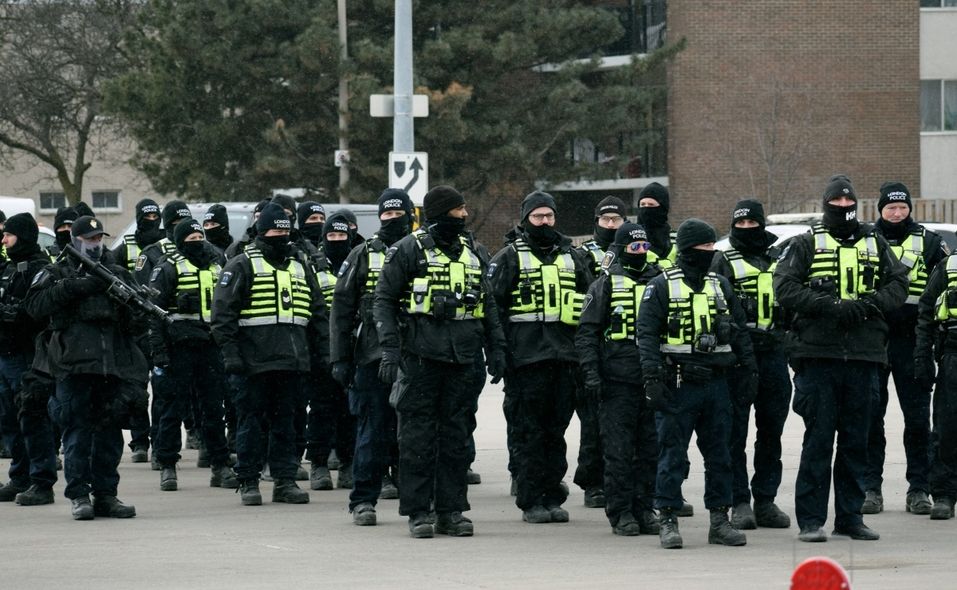 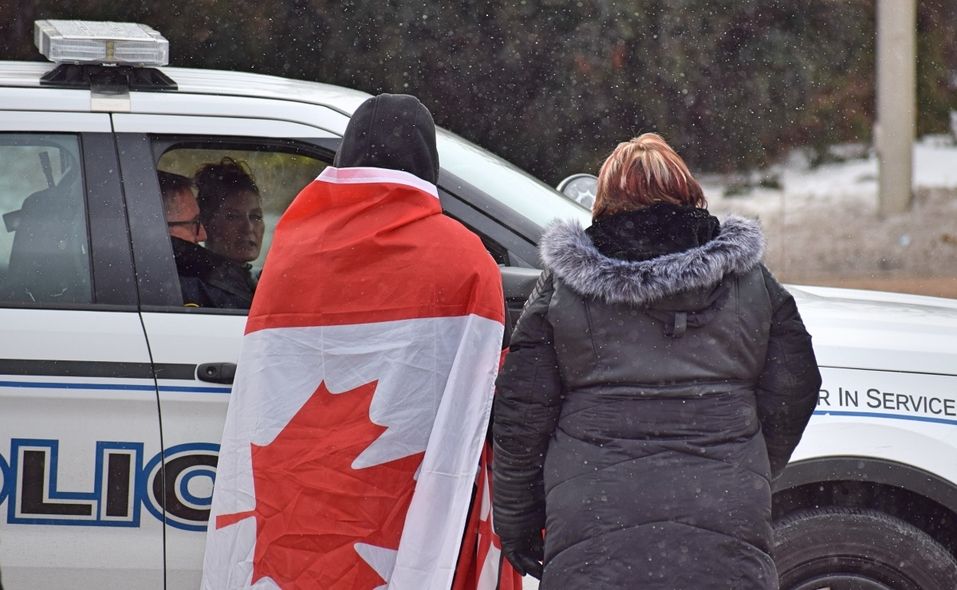 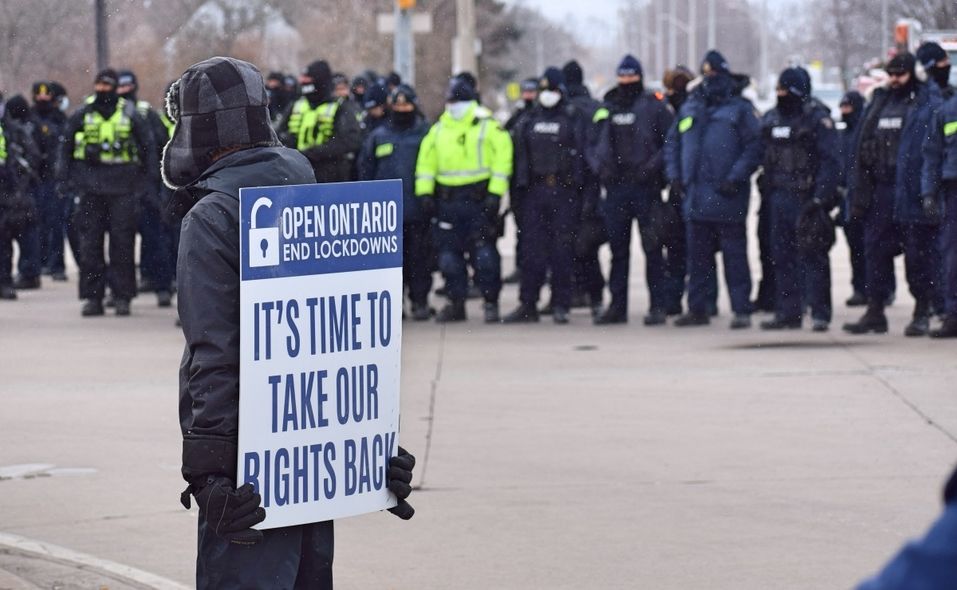 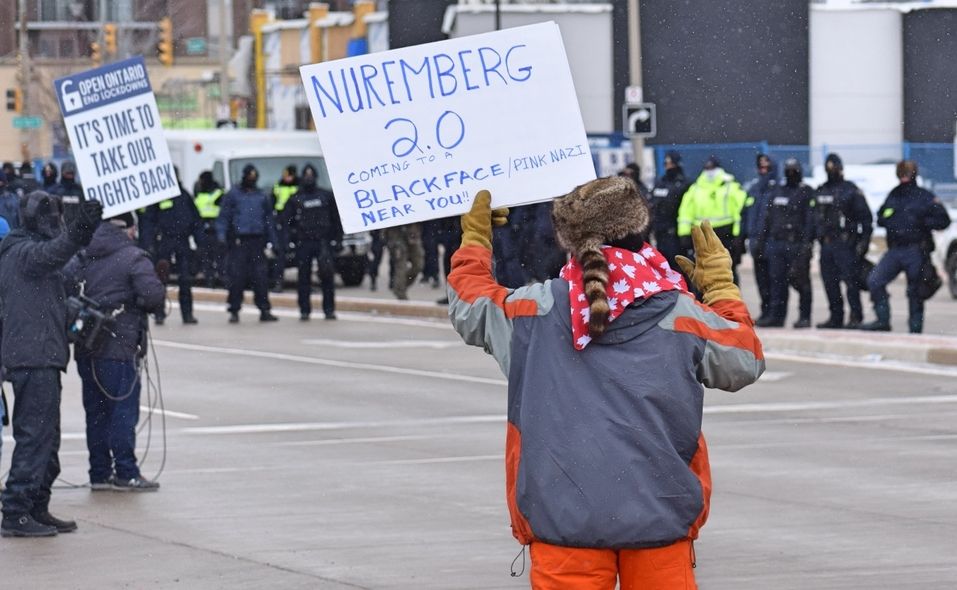 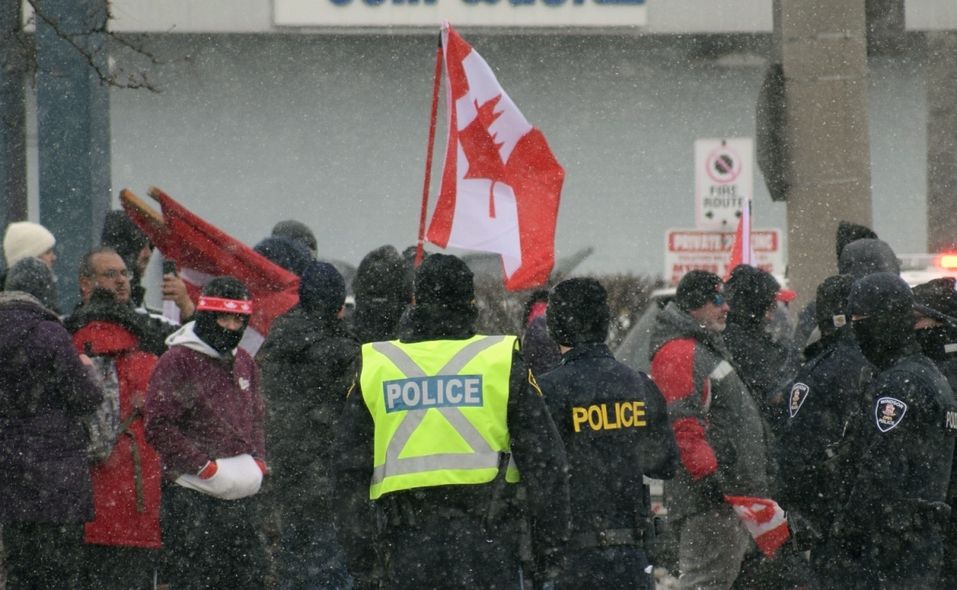 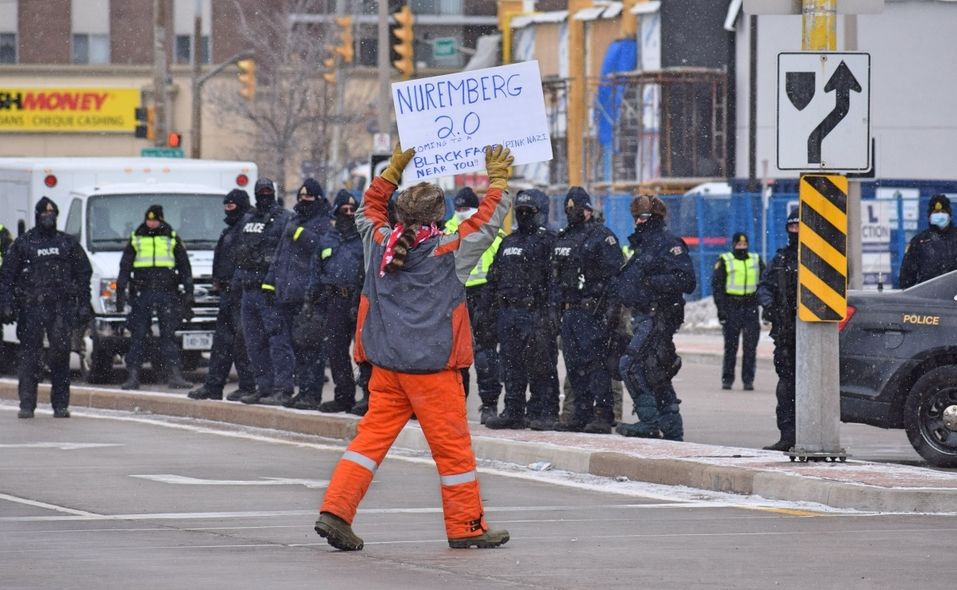 Honda Motor Co. said Thursday its automotive manufacturing operations in the U.S. and Canada are currently open and running production.

Honda of Canada, which operates assembly plants in Alliston, Ont., did temporarily suspend manufacturing on one production line Wednesday evening due to border delays but is back online, according to a company spokesman.

“We continue to monitor the disruption of transportation between Canada and the U.S. and will adjust production scheduling as necessary. Further production delays as a result of these disruptions are certainly possible," the spokesman said.

"To the protestors, please get off the bridge and let our people get back to work earning money for their families,” Hasenfratz said in a statement Thursday. "The last two years have been so disruptive to every one of us and our families with situations we can’t control; this one we can."

Company officials, she said. "are watching with concern the situation at the border regarding the ongoing protest. The last thing any business needs right now is to be shut down yet again. Cutting Canada off from our biggest trading partner can ultimately have only one impact, reducing output."

A group that represents thousands of franchised Canadian new-vehicle dealers warned on Wednesday that the blockade is now affecting already-tight inventory.

"Various OEMs have started communicating with our dealer members to let them know that they should expect delays in vehicle and parts shipments over the coming days," said Tim Reuss, CEO of the Canadian Automobile Dealers Association, which represents about 3,300 retailers.

Tracy Fuerst, a spokeswoman for Magna International, one of North America's biggest auto parts suppliers, said the company's component plants "are managing the supply chain constraints caused by the blockade," although "we’ve had to be a bit creative by using other ports of entry into Canada and the U.S."

CADA, along with several Canadian and U.S. business associations, signed a statement issued Tuesday by the Canadian Chamber of Commerce, calling for a swift end to the blockade, said Reuss.

The U.S. government addressed the issue Wednesday, warning that the blockade risks hurting the auto industry, which is already dealing with a global shortage of semiconductors.

"It's important for everyone in Canada and the United States to understand what the impact of this blockage is — potential impact — on workers, on the supply chain, and that is where we're most focused," White House Press Secretary Jen Psaki said Wednesday. "We're also looking to tracking potential disruptions to U.S. agricultural exports from Michigan into Canada."

The Ambassador Bridge, spanning Detroit and Windsor, is Canada’s busiest link to the U.S. and accounts for about 25 percent of trade between the two countries.

“So the blockade poses a risk to supply chains for the auto industry because the bridge is a key conduit for motor vehicles, components and parts, and delays risk disrupting auto production," Psaki said.

The White House is engaged with auto companies, Customs and Border Protection and Canadian counterparts as well as Michigan Gov. Gretchen Whitmer and industry stakeholders, she said.

"If there were to be prolonged blockages at key entry points into Canada that could start to have a measurable impact on economic activity in Canada," he said. "We've already got a strained global supply chain. We don't need this."

The protests were disrupting jobs and the economy's supply chain and "must end before further damage occurs," Canada's Emergency Preparedness Minister, Bill Blair, told reporters in a press briefing.

"The ongoing illegal occupation and blockade happening in Ontario must stop. The Ambassador Bridge is one of the most vital trade corridors in our country. The damage this is causing to our economy, to people’s jobs and their livelihoods is totally unacceptable. We cannot let this continue," he said.

"I remain confident that our police forces in Ontario, along with Royal Canadian Mounted Police and Canadian Border Services Agency, will take the appropriate steps to address the evolving situations in our cities and bring them to an end.”

"Protecting the cross-border movement of essential goods across our highly integrated Canada-U.S. supply chains is vitally important, especially as trade and the free movement of goods will play a crucial role in our economic recovery," she added in a statement to Automotive News Canada.

At a press conference earlier Wednesday, both Windsor police and city officials said they were seeking a peaceful resolution.

“We have heard from countless residents for police just to go in there and remove everybody,” said Mayor Drew Dilkens.  “But we have heard from one woman involved [in the protest] who outwardly stated she was so passionate about her cause she was willing to die for it.

“It is that type of sentiment we are dealing with,” said Dilkens. “We don’t want things to escalate where it is dangerous for members of police, the community or protesters themselves.”

The mayor also expressed concern about the “lasting and permanent impact” the protest will have on the region’s competitiveness. He noted that Windsor and Essex County is home to one of the  largest automotive clusters in Canada. “Business requires certainty,” he said.

Only passenger vehicles can access the bridge through an entrance off a more residential street. And commercial trucks are also banned from using the Detroit-Windsor Tunnel which connects the downtown cores of each city. As the demonstrators occupy the road leading to the bridge, the CBSA is encouraging truck traffic to use the Bluewater Bridge in Sarnia, Ontario, about 90 minutes north of the Windsor crossing.

The Michigan Department of Transportation said the Ambassador Bridge remained closed on the U.S. side. It also advised those headed to Canada to use the Port Huron, Mich., crossing, which connects that American city with Sarnia.

Mold makers 'up in arms'

The mold making industry was watching the bridge closure and protests with increasing concern.

The Canadian Association of Moldmakers and Automate Canada said they were sending a joint letter to Trudeau asking for stronger action to resolve the crisis.

Jeanine Lassaline-Berglund, president of both organizations, said some member companies are “up in arms” about the business disruptions. She said one company noted it ships $3.5 million in tooling across the border each month.

She said Canadian suppliers are worried the shutdown will make U.S. customers more reluctant to source in Canada, on top of the struggles with border trade during the two years of the coronavirus pandemic.

“This has the potential for devastating effect,” she said. “In our opinion, we have U.S. customers and the U.S. public at large, if you will, that are watching what is going on here and saying, ‘This is just one more reason not to do business in Canada.’”

She said the two groups, which are based in Windsor, are encouraging the government to talk with protestors.

“We need resolution,” she said. “However you can come to a resolution, we need it. We’re here to support.”

Industry consultant Laurie Harbour said the bridge shutdown could have significant impact, noting that many mold builders in Canada buy steel and components from the U.S.

“This could delay builds and deliveries to customers which will cause a ripple effect to molders that won’t be able to make parts for new vehicle launches,” said Harbour, who is president and CEO of Harbour Results in Southfield, Mich.  “I don’t have hard data but this could have a significant impact if it goes on too long.”