Volkswagen produces vehicles at its plant in Pune, India. VW has tapped its entry-level Skoda brand to spearhead vehicle development for the market.

But this year, subcontinent sales have suddenly slumped, forcing sweeping job losses and production cuts across India's massive auto sector. Passenger vehicle sales were on track for a 30 percent plunge in August alone, according to the Society of Indian Automobile Manufacturers.

And since April, India's industry has shed some 350,000 workers, according to one tally by Reuters, which included jobs at motorcycle manufacturers, auto suppliers and dealerships.

Maruti Suzuki, the No. 1 automotive brand in India, has had its sales fall 8 percent in the market this year through June.

Some reasons for the downturn are unique to India and probably short-term, such as the government's crackdown on bad debt and a phaseout of diesel powertrains. But India's rapid implosion also signals that the world auto industry, having plateaued in the U.S., is entering a slump in other key markets.

India's problems cloud an international picture already darkened by the decline in China, another global sales engine. Sales in China fell for a 13th straight month in July, continuing an 11 percent slide for the year to date.

India's downturn will test the resolve of foreign automakers trying to gain traction in a market that began opening doors to international brands in the 1990s. While the market's long-term potential is huge, some of the world's biggest players have concluded it's not worth the wait.

General Motors pulled the plug on local sales in 2017 and uses India as a manufacturing base for export. Fiat Chrysler Automobiles yanked the Fiat brand and now focuses on Jeep there.

"India is going through a deep crisis," said Puneet Gupta, associate director of IHS Markit in India. "A lot of international markets are in the red. But India was an emerging market with a stable government, so the expectations of the world were for a little bit more from us." 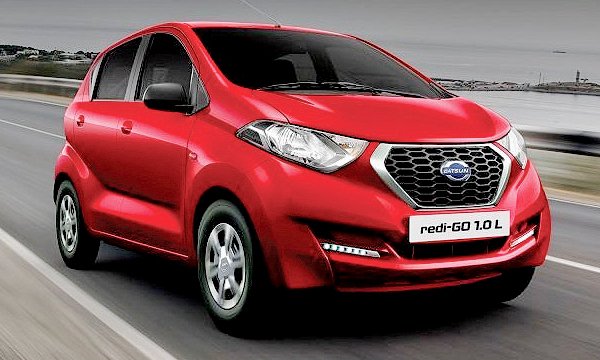 Datsun's Redi-Go crossover is among its offerings in India, where the brand’s sales have fared worse than the overall market this year.

It has been an unprecedented decline for one of the world's most dynamic markets. India is on track to supplant Japan as the world's third largest, after China and the U.S. For years, light-vehicle sales seemed to be in a relentless ascent, surging nearly 50 percent to 4.0 million units in 2018, from 2.7 million in 2010, according to IHS Markit.

Nissan Motor Co. was among the global players eyeing a piece of the expanding pie. It was so bullish on India that it revived the defunct Datsun brand partly as an entry point to country.

But Datsun sales have fared worse than the market this year, plunging 61 percent to a paltry 1,132 vehicles in June. Now, as part of a wider worldwide restructuring at the Japanese carmaker, Nissan plans to cut 1,710 jobs in India by the end of March.

Without such incentives, IHS forecasts India sales will fall 10.5 percent this year. But even with the help, Gupta sees volume declining as much as 7.5 percent.

"There is a cocktail of reasons contributing to this drastic fall," he said.

One factor is the government's crackdown on nonbank financial companies, informal lenders that cater to risky borrowers. This has created a liquidity crunch that pinches demand.

Exacerbating the situation is a lackluster Indian economy. Economic growth slowed to a seven-year low of 5 percent from April through June, the government announced last month.

Other companies are also scaling back output. Toyota Motor Corp. halted production at its Bangalore assembly plant for five days in August to rein in bloated inventories.

Toyota's sales declined 13 percent to 89,800 vehicles in the year through August.

Analysts say winning brands tend to be big, local players such as Maruti Suzuki, the country's No. 1 player. They have deep roots and products well-tailored to fast-changing consumer tastes.

New entrants, such as Kia of South Korea, or China-owned MG Motor, both of which entered India this year, have had success cashing in on their novelty.

Overall consumer sentiment is expected to improve with India's autumn festival season, when people find it auspicious to splurge on big-ticket items such as cars.

More stringent emissions rules that take effect in 2020 could again crimp demand. But farther over the horizon, the market prognosis is optimistic.

LMC Automotive forecasts light-vehicle sales in India to soar 48 percent to 5.25 million units in 2026, after recovering from the slump.

"Most OEMs still look at India in a big way as a long-term growth market," Master said. "Being in India is like a marathon. You have to make a call on how long you're willing to slug it out."