PROJECT XX ONE YEAR LATER: Change is a slow climb

Yes, there's more talk about sexism in the industry, but not as much willingness to act

It's been more than a year since the stunning sexual assault allegations against Harvey Weinstein came to light. A couple of weeks later, actress Alyssa Milano tweeted asking anyone who'd been sexually assaulted to respond with the words "me too."

And a week later, Automotive News published a 12-page report on gender issues in the workplace that we called Project XX, based on a survey asking women about their experience in the traditionally male business. It showed many women had encountered outright harassment and more subtle bias in their careers.

Now it's a year later, and we wanted to know whether anything has changed.

A follow-up survey of women in the industry that Automotive News conducted this fall shows that sexism issues are more widely talked about across the industry, with 73 percent of the respondents saying sexism in the workplace is being discussed more often in the last 12 months.

Yet just 50 percent of respondents say people in the industry seem more willing to work on sexism issues in the last 12 months. And only 42 percent say leaders are more willing to openly address sexism than in the past. 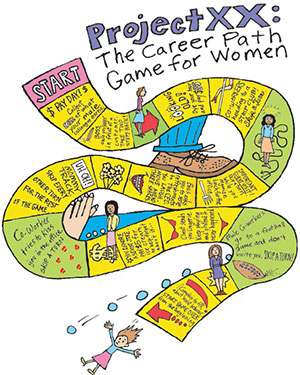 And 64 percent of women surveyed say gender issues in the auto industry have stayed the same as they were in 2017. About 25 percent say circumstances have improved, but 11 percent say things have gotten worse.

The 2017 Project XX survey "was a great step forward, but it hasn't taken root," said one of the 2018 survey respondents. Some said the discussion is only having an impact with some men.

"I am an owner's daughter, and still, three different men subjected me to unwanted sexual advances," said one woman who works at a family dealership. "It took place the very week the Harvey Weinstein story came out."

"It's discouraging to me that it's become a punchline," said one respondent. "Men make light of the situation."

Still, in the year when General Motors became the second company on the Fortune 500 list to have women filling the CEO and CFO roles, it would be difficult to argue that women in the industry aren't making strides.

Ramzi Hermiz, CEO of Shiloh Industries, became president of the board of directors of the Automotive Hall of Fame in the fall of 2017. One of the first things he recognized was that the board needed diversity. Initially, he joked that the board was plenty diverse, drawing many white male executives from Oakland, Macomb and Livingston counties in southeastern Michigan.

During the last year, he's added nine accomplished female automotive executives to the 40-member board. He said it wasn't that hard to do.

More work to do

A recent Bloomberg story said that 425 prominent people from across a swath of industries have been accused of some kind of sexual misconduct or inappropriate behavior.

One of the women responding to our 2018 survey said she feels all the attention to gender issues has exacerbated some problems.

"It has just tightened the network of men who are afraid of something, so they make it harder to advance," she wrote. "I feel like older men have circled the wagons even tighter to protect their reign."

Rebe Lascar, a dealership sales consultant from Rock Tavern, N.Y., said she feels like things have been changing for a while. Early in her career, Lascar said she was grabbed on the butt on the second day on the job, when she delivered parts to dealerships. It happened at least one more time.

Now, she says, when she visits stores and interacts with automaker representatives, they are courteous, professional, respectful and supportive. She thinks the auto manufacturers are doing a good job training their managers, and dealerships may need to follow their lead.

But in some cases, the pendulum may be swinging too far.

"There is an awareness and an overreaction by the male population to tread carefully," she said, noting that some men now insist on having another woman in the room if they are talking one-on-one with a female employee.

Julie Kimes, marketing director at O'Daniel Automotive Group in Leo, Ind., said she thinks the focus on women's issues has pushed some focus away from other minority groups.

Things used to be much worse for women in the industry, especially in dealerships, and now women are generally accepted by customers and fellow employees.

Our 2018 Project XX survey garnered 485 responses from women across the industry. Here are some of the comments.

"We're a big farming community, and there's a lot more racism to deal with than sexism from our customers," she said. And gay workers at her dealership also face a hefty amount of homophobia, she said.

She fears the #MeToo movement is making younger women less willing to put up with the normal lumps and bumps that come with working in a primarily male work force.

"Anyone who has survived in automotive for 20 years will tell you, you have to have a strong will. You just don't take shit," Kimes said. "The #MeToo movement has made it tougher. ... If you're not strong enough to put your big-girl panties on, you shouldn't be working around 80 percent men."

The initial Project XX survey was done in conjunction with Elephant in the Valley, a group of Silicon Valley women who wanted to get a formal measurement of what sexism issues women were facing in the technology industry. They also wanted to get the conversation started about the problems many women saw daily.

Michele Madansky, one of the original researchers, said the intent of the study was not to make recommendations about how to make changes in the industry.

"I hope to support the many dedicated women and men who are working to find those solutions," she said in a recent blog post. "Specifically, I want to be sure they have good data with which to work."

The 2018 Project XX survey purposely did not cover as many topics as the initial survey, as we intended it as an opportunity to get a barometer of how things are, or are not, changing in the auto industry.

Many women said there are a lot of topics that still need exploring. There is not enough data on salary disparity in the auto industry, many survey respondents noted, making it difficult to address that problem.

Others want a deeper exploration of diversity training programs and mentorship programs — do they work? What avenues for complaints are effective? And what steps can be taken to break the glass ceiling?

Many women agree that it is possible to have a good career in the automotive industry, despite the challenges.

"I continue to encourage women to join our industry because it is important to the future of the customer experience that we have a more balanced workforce," one survey respondent said. "We make more inroads each year. ... We as women must share our story and create a dialogue about why this industry can be a great place for more women."

McLaren's head of Americas steps down

McLaren's head of Americas steps down

Henry Ford III to leave job at company, remain on board