Daimler's Zetsche (right) shakes hands with and incoming CEO Ola Kallenius at the automaker's 2019 annual meeting in Berlin on May 22. The meeting marked the end of Zetsche's 13-year tenure as CEO.

FRANKFURT -- Bidding farewell to the company he led for more than a decade, Daimler AG CEO Dieter Zetsche urged sweeping cost cuts to prepare the carmaker for unprecedented industry upheaval.

“Everything is under scrutiny,” Zetsche said Wednesday at the annual shareholder meeting in Berlin, citing costs, investments and the Mercedes-Benz maker’s product range. “We cannot and will not be satisfied with the current level of profitability.”

The walrus-mustached Zetsche, 66, and CFO Bodo Uebber, 59, who is also leaving, turned Daimler from an industrial conglomerate that included holdings in aviation into a company focused on upscale passenger cars and commercial vehicles. Among their key decisions was selling Chrysler to Cerberus Capital Management in 2007 before the financial crisis pushed the U.S. mass-market manufacturer into bankruptcy.

Following the ill-fated merger with Chrysler, the duo shepherded the painful restructuring of Mercedes-Benz after quality woes dented sales. This included axing thousands of jobs, shaking up design and expanding the brand’s compact-car offerings, culminating in winning back the global luxury-car crown from BMW AG in 2016.

Zetsche and Uebber both received applause for their farewell remarks from some 6,000 shareholders gathered in Berlin, showing support despite eroding earnings in recent quarters and a weak start to the year.

“We are not satisfied with the latest quarterly results and our share price,” Zetsche said.

Retirement is when you can leave your past behind and embrace your future. 😉#BMW #Mercedes #Zetschehttps://t.co/S0njE4CNfp pic.twitter.com/wK1sLm2gS8

Arch rival -- and now partner on car sharing and autonomous cars -- BMW AG published a clip on Twitter thanking Zetsche “for so many years of inspiring competition.” In the tongue-in-cheek film, a lookalike Zetsche leaves the Daimler headquarters to be driven home where, once left to his own devices, he hops into a BMW i8 sports car.

Zetsche will now hand the wheel to Ola Kallenius, 49. He faces the difficult task of how to allocate shrinking profits and find savings to finance the shift toward electric cars and digital services with a payoff that might be years away.

The smooth-talking Swedish-born executive gave a first glimpse on his strategy last week, pledging to make Daimler greener. The manufacturer that generates the vast majority of profits with hulking sport utility vehicles and sedans expects more than half of global deliveries to be fully-electric or plug-in hybrid cars in 2030 and plans to make its entire model lineup carbon-neutral by 2039.

Daimler’s target remains to return the main Mercedes-Benz Cars unit back to a “profitability corridor” of 8-10 percent by 2021, the Stuttgart-based manufacturer said. At the heavy trucks and bus divisions, the goal is to achieve a sustainable return of 8 percent. 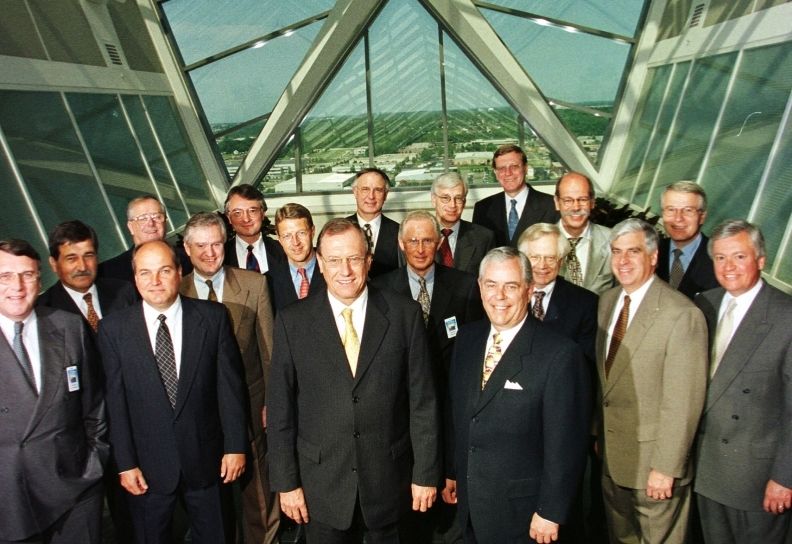 DaimlerChrysler Co-Chairman Juergen Schrempp (front and center with the gold tie) with Bob Eaton, the other co-chairman, on his left. Dieter Zetsche is in the third row right. Soon after the merger in 1998, the topmost Daimler-Benz and Chrysler executives gathered for this picture on the 15th Floor of Chrysler's headquarters in Auburn Hills, Mich. 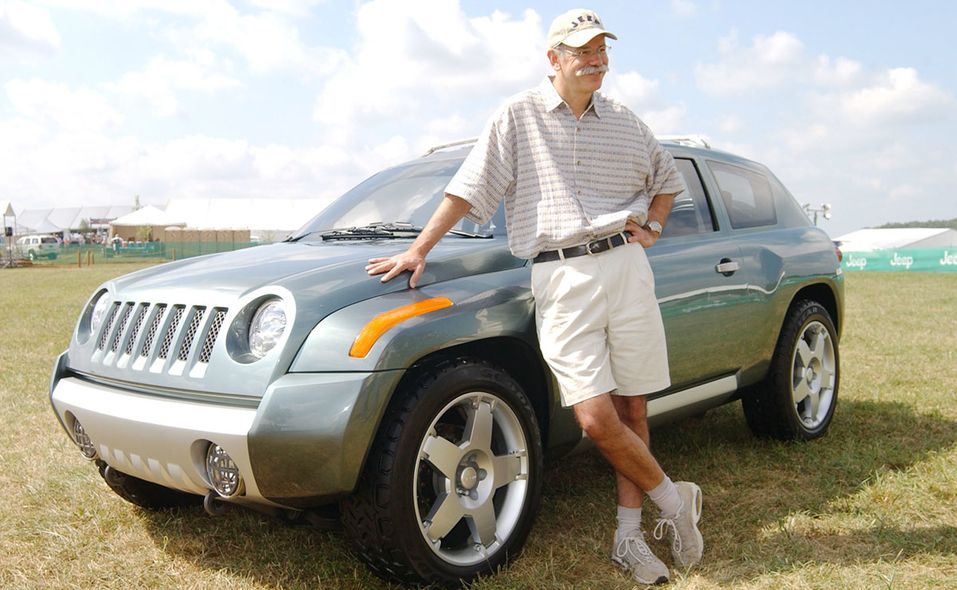 Dieter Zetsche poses with a new prototype car called the Jeep Compass on July 27, 2002. It has an all-wheel drive system with a 3.7-liter V6 engine and was one of the new prototype vehicles on display at the annual Camp Jeep in Highlandville, Mo., in the Ozarks near Branson, Mo. 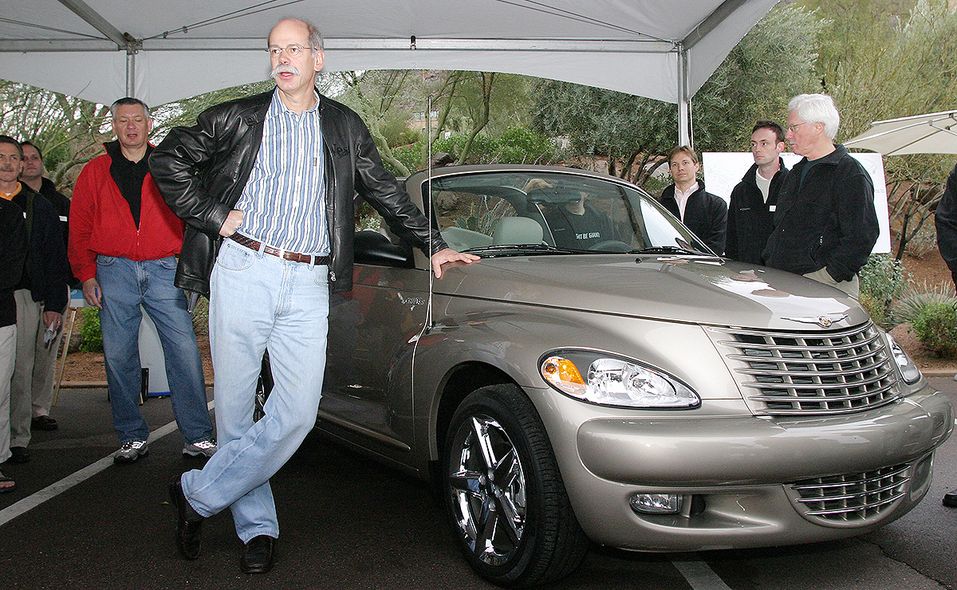 Dieter Zetsche leans on a 2005 Chrysler PT Cruiser Convertible as he addresses the automotive press at an event January 24, 2004, in Paradise Valley, Ariz. 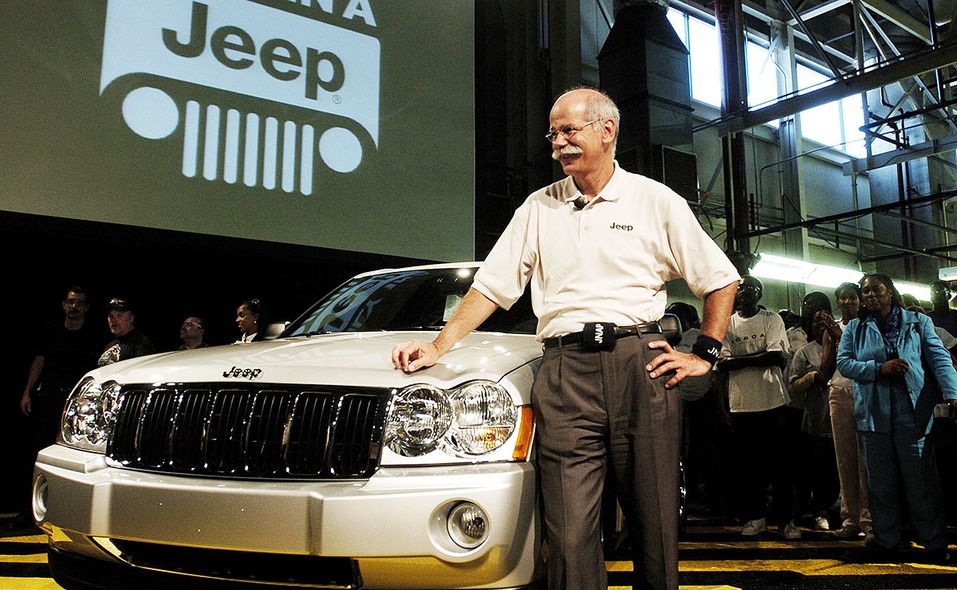 Dieter Zetsche poses in front of a 2005 Jeep Grand Cherokee on August 25, 2004, at the Jefferson North Assembly Plant in Detroit. 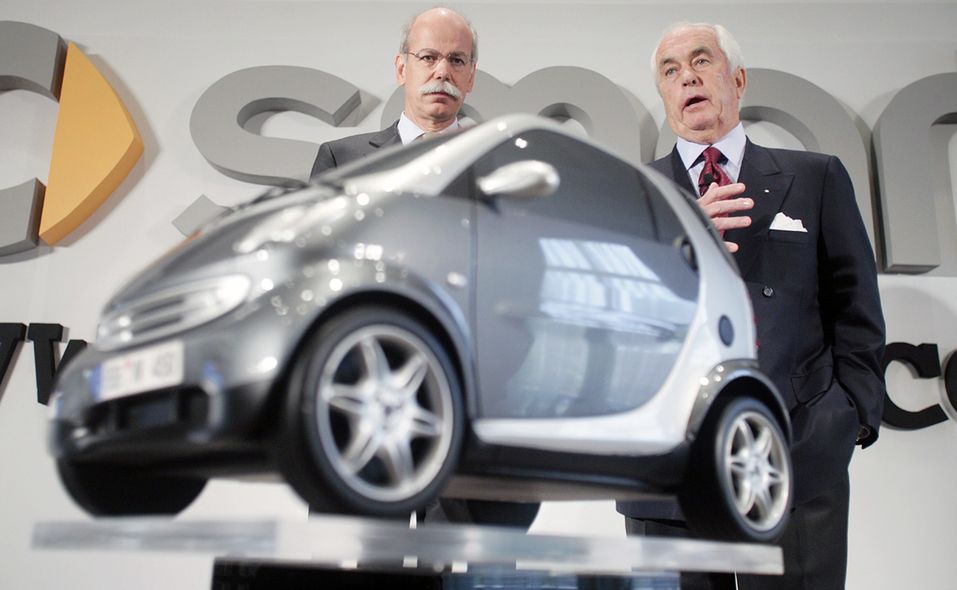 Dieter Zetsche and Roger Penske speak at news conference in Detroit on June 28, 2006, about DaimlerChrysler's plans to sell the two-seat Smart minicar in the U.S. DaimlerChrysler was betting a fuel-efficient vehicle that fits on a pool table would help end years of losses at its Smart unit. 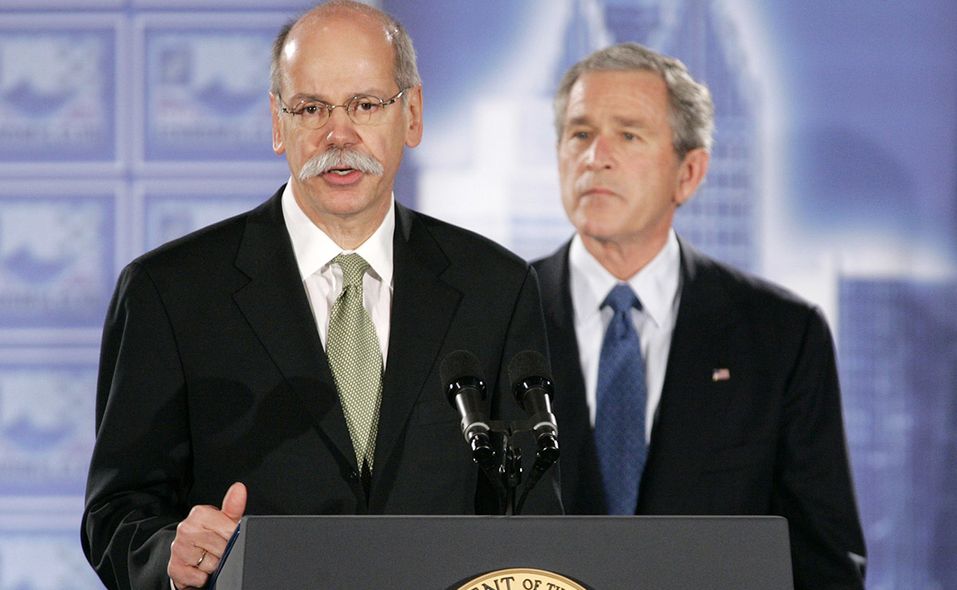 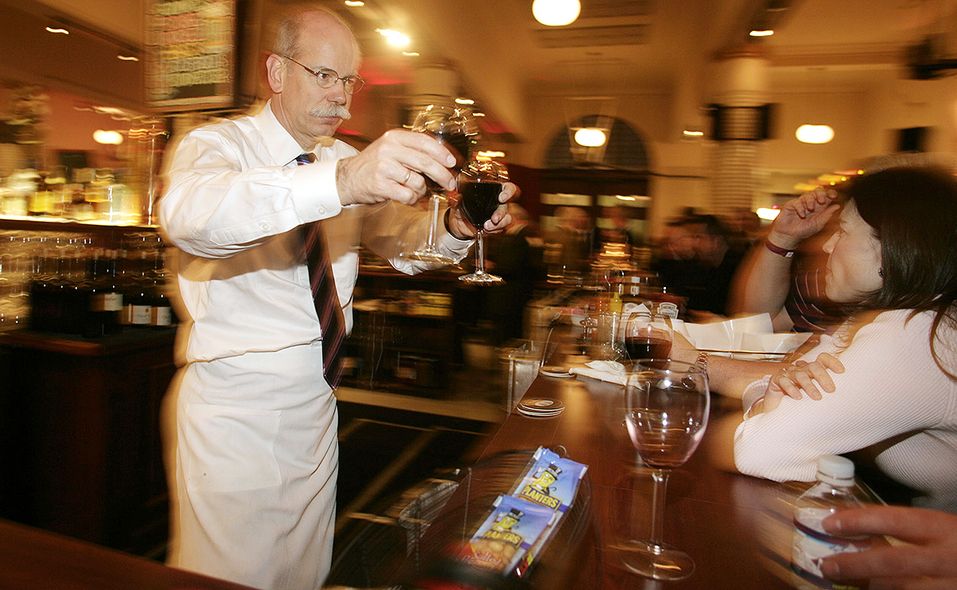 Dieter Zetsche serves glasses of wine at the Firehouse Bar during the Detroit auto show on Jan. 8, 2006. 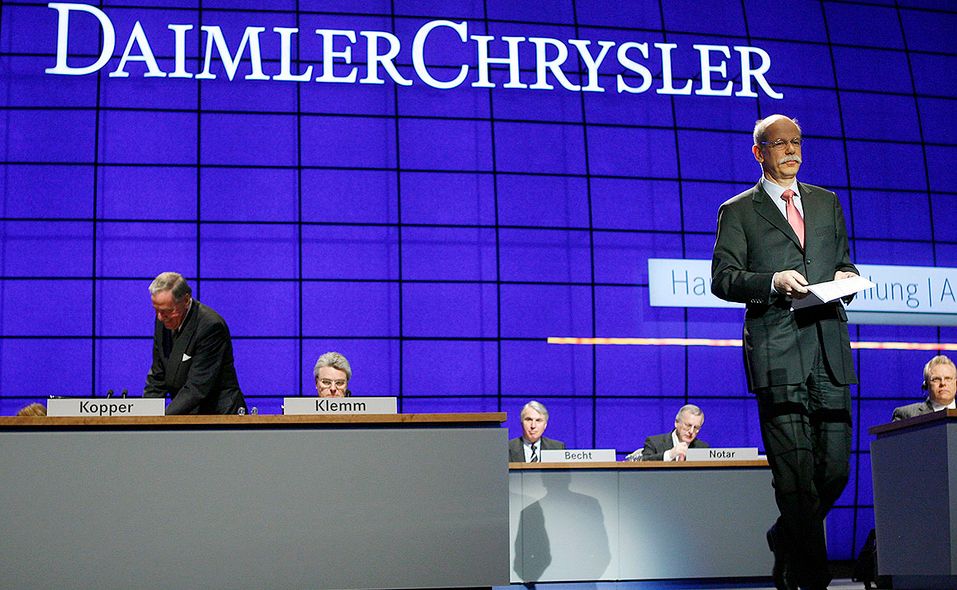 Dieter Zetsche walks to the podium to speak at the company's annual general meeting in Berlin, Germany, on April 4, 2007. He disclosed for the first time that he's negotiating the sale of Chrysler, preparing to unwind a 1998 merger that foundered in an increasingly competitive U.S. auto market. 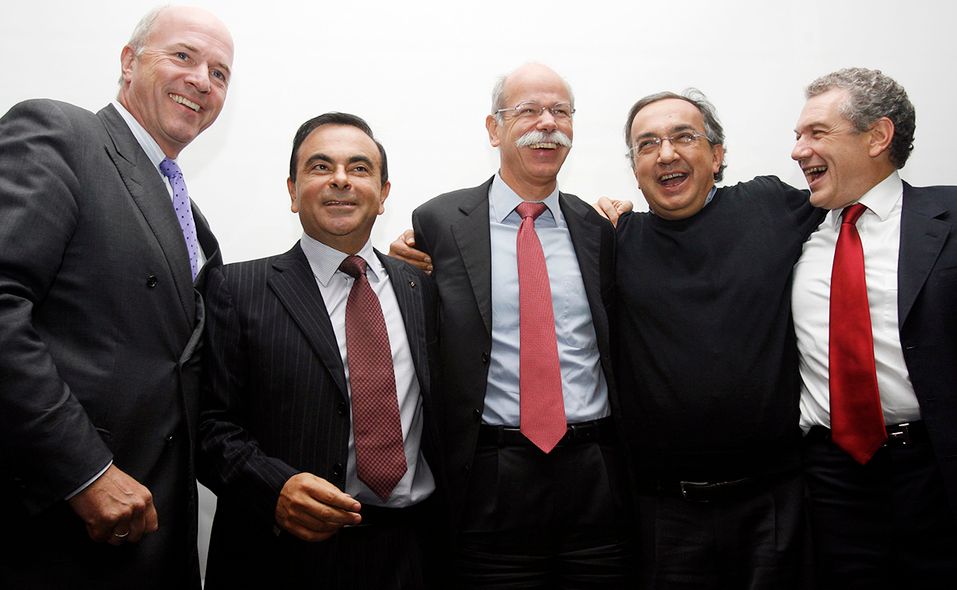 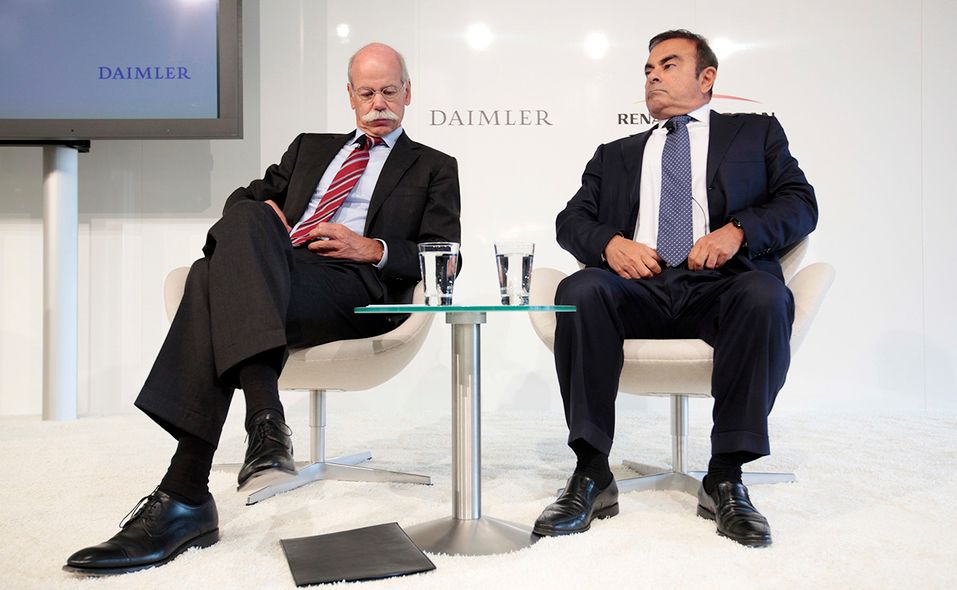 Dieter Zetsche and Carlos Ghosn pause ahead of a news conference at the Maritim hotel in Frankfurt, Germany, on Sept. 14, 2011. Ghosn said new cooperation projects between Renault-Nissan and Daimler would reaffirm projected savings from the partnership of $4 billion, split evenly with the German automaker. 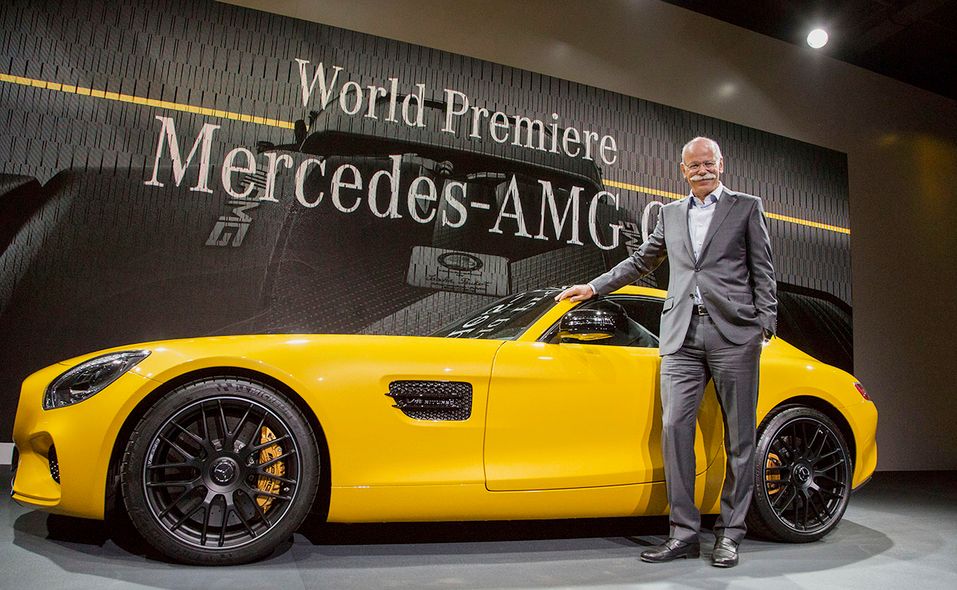 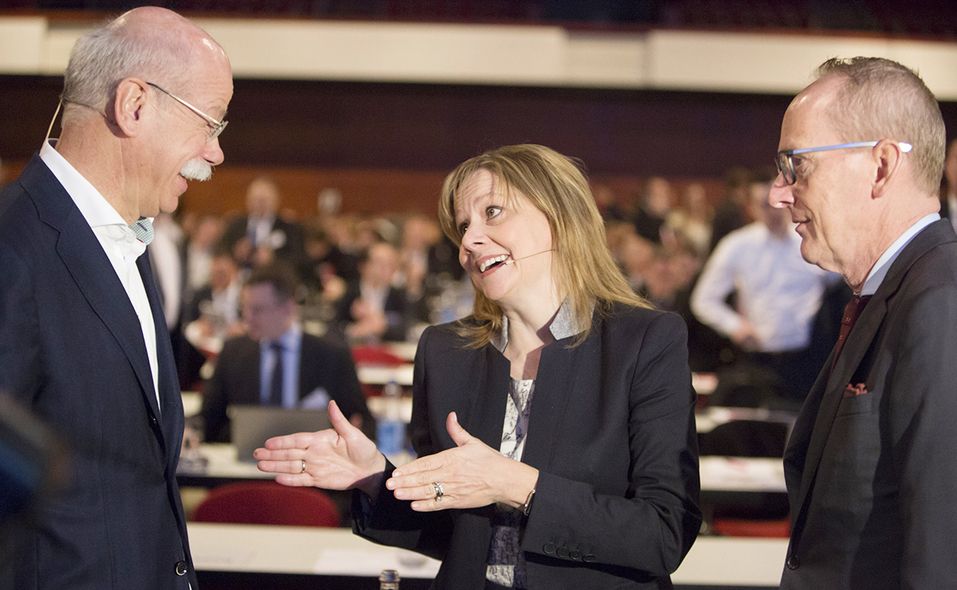 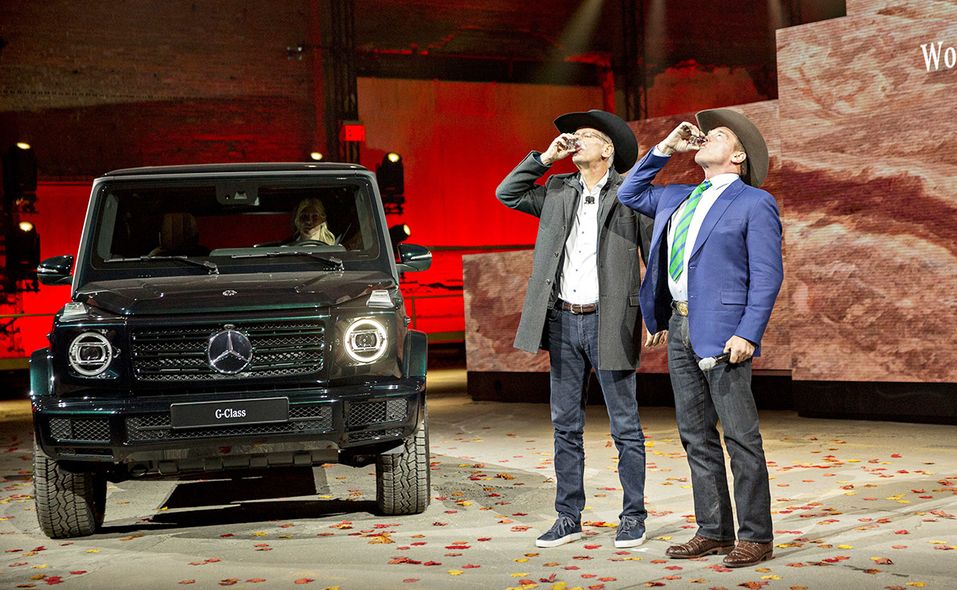 Dieter Zetsche and iconic actor and former California Gov. Arnold Schwarzenegger drink a shot in celebration of the debut of the new G-class at the 2018 Detroit auto show on Jan. 14, 2018. 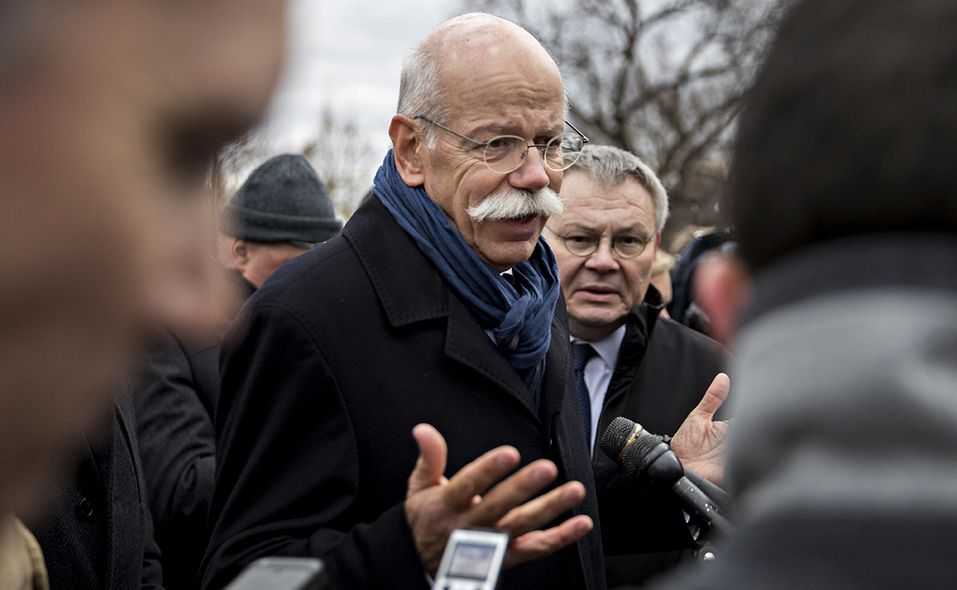 Dieter Zetsche chats with journalists in Washington on Dec. 4, 2018. 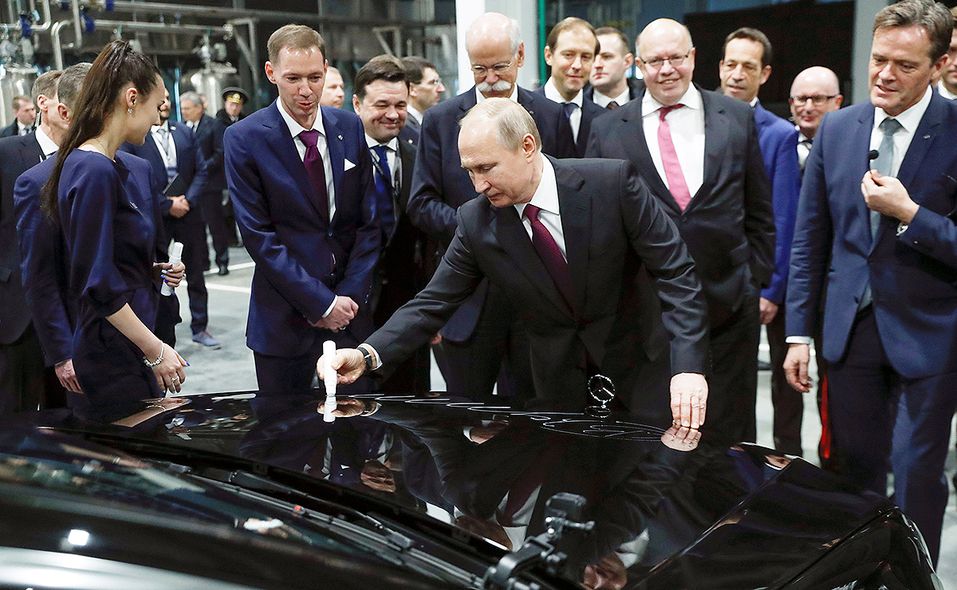 Russian President Vladimir Putin and Dieter Zetsche appeared together during the opening ceremony of a Mercedes-Benz automobile assembly plant outside Moscow on April 3, 2019. 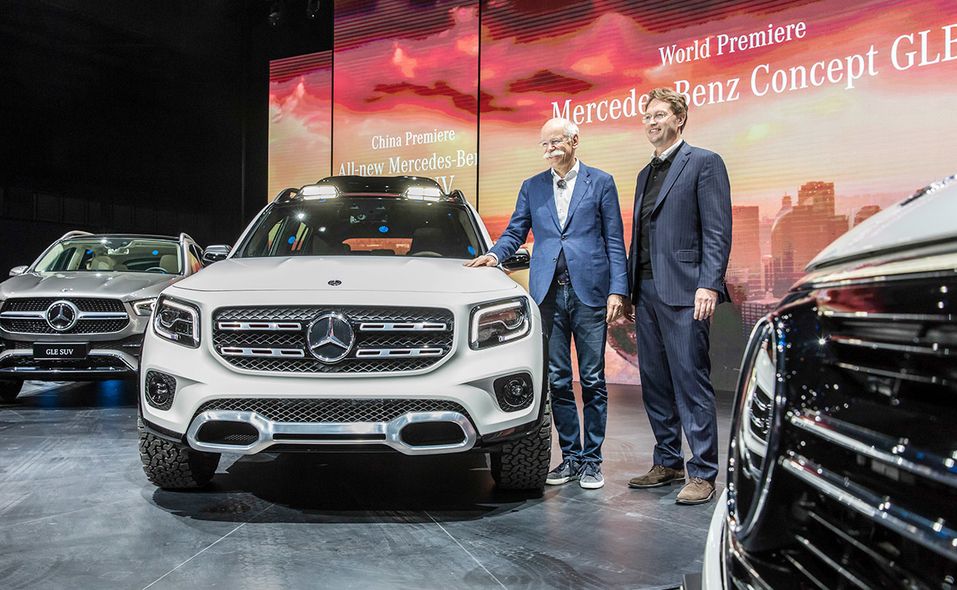 Dieter Zetsche and Ola Kallenius, Daimler's CEO-designate, pose for photographs while standing next to a prototype of the Mercedes-Benz GLB concept vehicle at the Shanghai auto show on April 15, 2019. 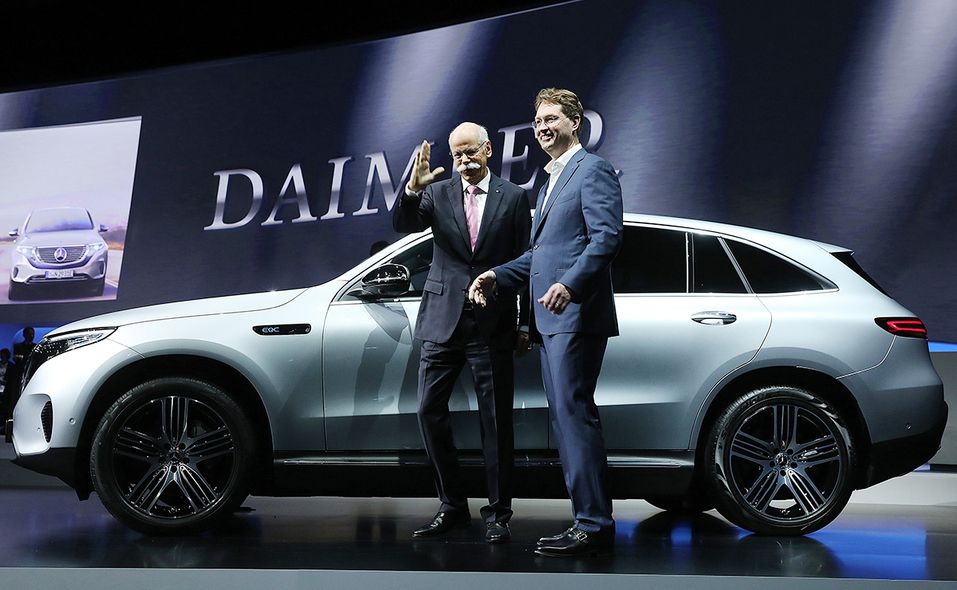 Dieter Zetsche and Ola Kallenius appeared together during the automaker's annual general meeting in Berlin on May 22, 2019.

Zetsche told reporters this month the onus is on automakers to show they can generate adequate profit margins from electric cars to lift stock valuations, which have been squeezed as investors deem traditional manufacturers ill-prepared to adopt to the looming industry changes.

Mercedes-Benz will roll out 130 electric and hybrid models across the entire product range by 2022, Zetsche said, cautioning that “the mobility of the future is not a monoculture.”

Diesel technology that offers lower carbon dioxide emissions than comparable gasoline engines will “will continue to play an important role in Europe for at least another decade -- maybe even longer in the commercial vehicle area,” he said.

Adding to headwinds are swirling trade woes that threaten vehicle exports as well as stricter emission limits in key markets. Tighter rules on carbon emissions that take effect in Europe next year mark the biggest hurdle. “I have never seen such a material event risk in my career,” Evercore ISI analyst Arndt Ellinghorst said in a note last week.

Daimler is also wrestling with pending probes into its diesel-car emissions and a recall imposed by German authorities. Its U.S. litigation risk related on diesel cars may exceed $4 billion, according to Bloomberg Intelligence estimates.

As expected, Daimler shareholders on Wednesday approved by a "large majority" the biggest corporate overhaul since the merger with Chrysler that’ll split the group into three legally separate units comprising cars, trucks and financial services.

The new structure -- which will cost roughly 700 million euros ($780 million) -- is meant to speed up decision making and allow the individual units to forge collaborations more easily. Shareholder representatives like Ingo Speich from Deka Investment renewed calls for Daimler to unlock value through a separate listing of the trucks business, similar to Volkswagen Group's plan for Traton SE. Deka represents 9 million Daimler shares.

Zetsche echoed recent remarks from his successor Kallenius, foreshadowing closer ties with peers, suppliers and technology firms to navigate the industry transformation. The next version of the flagship Mercedes-Benz S-class sedan in 2020 will be able to steer longer stretches of highway on its own.

VW will get $351M in diesel settlement with former execs
Sponsored Content: When Considering Reconditioning Software for Your Auto Dealership