November 18, 2019 12:00 AM
Hans Greimel
Print
REUTERS
In a video statement released in April, Ghosn says Nissan executives feared losing control. “This is about a plot. This is about conspiracy.”

One year ago this week, Carlos Ghosn was arrested in Tokyo and immediately taken to jail on suspicion of financial misdeeds that were not immediately made clear. At that moment, Ghosn was chairman of Nissan Motor Co.; chairman of Mitsubishi Motors Corp.; chairman and CEO of Renault; and CEO of Renault-Nissan-Mitsubishi, the loosely structured alliance of the three automakers. One year later, Ghosn holds none of those roles. He has been charged with multiple counts of impropriety in Japan but convicted of none of them as he awaits trial. Ghosn's personal life has been turned upside down, with restrictions placed on his movements and even his access to his wife and family. His ordeal continues to unfold. The following is a chronology of the past year's events.

Ghosn is arrested and jailed after landing in Nissan's corporate jet at Tokyo's Haneda international airport. At a late-night news conference in Japan, Nissan CEO Hiroto Saikawa blasts his former mentor as the "mastermind" of widespread financial misconduct during his time at the helm of Nissan and says the board is preparing to dismiss him as chairman.

A typical cell at the detention center

Ghosn is held in the Tokyo Detention House, a spartan facility that also houses death-row inmates from the Japanese cult that perpetrated the 1995 Tokyo subway sarin attack.

At the same time, Nissan senior executive Greg Kelly, an American from Nashville and a close Ghosn associate, is arrested in Tokyo and jailed on the accusation that he is a conspirator.

Japanese media reports begin to swirl with allegations that Nissan paid large amounts for Ghosn residences around the world, including pads with questionable business connections in Rio de Janeiro, Beirut, Paris and Amsterdam.

The Japanese and French governments express support for a stable Renault-Nissan alliance. But Japanese media report that Nissan executives want to leverage the crisis as an opportunity to weaken the French company's influence over its larger Japanese partner. Speculation quickly percolates about Ghosn's arrest being part of a corporate coup to wrest more independence for Nissan.

Ghosn, still in jail, is fired by Nissan's board.

The Ghosn affair enters the diplomatic sphere as French President Emmanuel Macron petitions Japanese Prime Minister Shinzo Abe for a sit-down to discuss the matter at a Group of 20 summit. Macron is seen as a driving force behind moves to bind the two companies in an irreversible partnership, a push viewed suspiciously in Japan. Abe signals concern about France's intent and tells Macron the alliance should not be fiddled with, according to reports.

Conspiracy theories gain further currency amid unsubstantiated reports that the day Ghosn was arrested at the airport, he had been en route with Kelly to remove Saikawa as CEO.

Ghosn and Nissan itself are indicted over failure to report, for the 2010-14 fiscal years, more than $40 million in deferred compensation owed to Ghosn after his retirement. Japanese prosecutors say omitting the information in the company's filings violates the country's Financial Instruments and Exchange Act. The same day, Ghosn is rearrested on suspicion of doing the same, underreporting some $40 million, for the 2015-17 fiscal years.

Nissan shares with Renault a dossier of allegations against Ghosn, amid mounting distrust between the partners, questions about evidence and French skepticism over the charges.

Nissan begins efforts to seize keys and change locks on Ghosn's company-paid homes around the world while blocking access to the properties by Ghosn's representatives and family members, Bloomberg reports.

Ghosn, while still in jail, is arrested on a new charge of breach of trust over allegations of temporarily transferring some $17 million in personal investment losses on swap contracts to Nissan during the global financial crisis, and then having Nissan pay $14.7 million to a Ghosn business associate from 2009 to 2012 for helping Ghosn manage the losses.

Kelly is granted bail. He is released from jail the following day.

Ghosn appears in public for the first time since his November arrest, going before the Tokyo District Court in handcuffs and plastic slippers to deny the allegations against him and assert that he has been "wrongly accused and unfairly detained." After nearly two months in jail, the usually immaculately coiffed businessman looks thinner than usual, courtesy of his rice-heavy diet in detention.

Ghosn is officially indicted on the breach-of-trust charge from his Dec. 21 arrest and on the charge stemming from his Dec. 10 arrest that he failed to report deferred income for the 2015-17 fiscal years.

Carlos Ghosn’s downfall triggered the exit of numerous key Nissan, Renault and Mitsubishi executives. Among them: 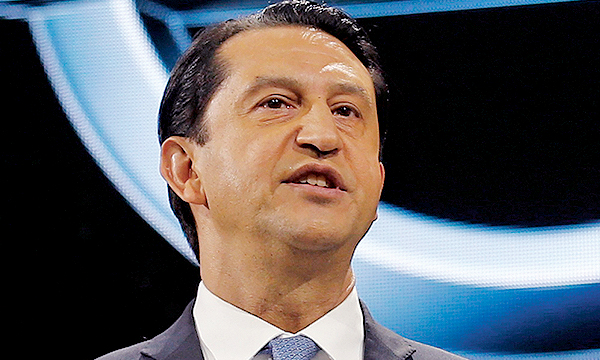 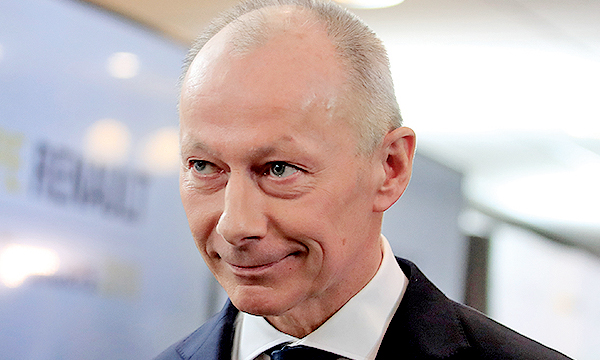 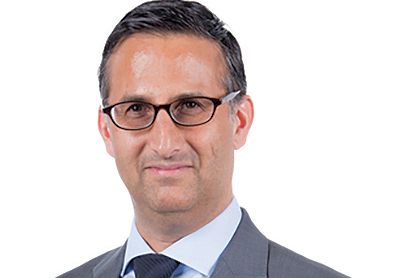 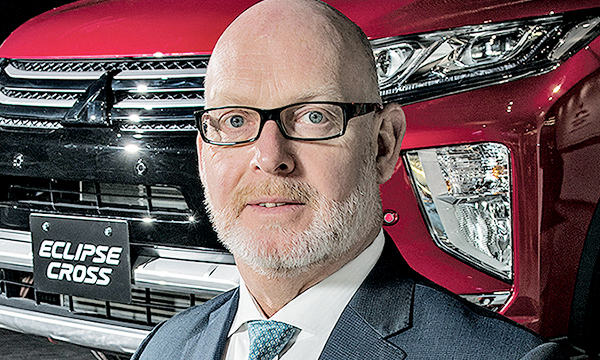 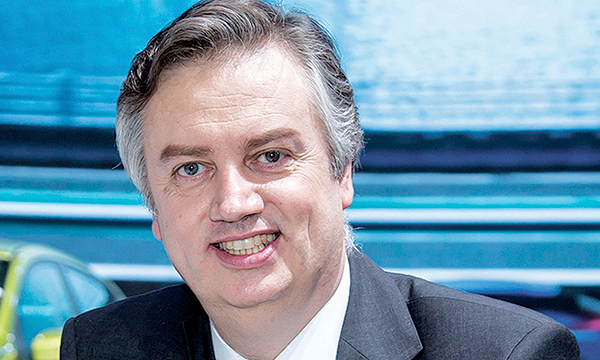 Nissan and Mitsubishi accuse Ghosn of pocketing about $8.6 million in improper compensation from a Netherlands subsidiary they jointly own, called Nissan-Mitsubishi, or NMBV. The company was established to reward employees at both companies who find synergies by giving them a share of the savings. But Nissan and Mitsubishi claim that Ghosn used the entity to authorize large payouts to himself.

Ghosn resigns as chairman and CEO of Renault. His lieutenant at the company, Thierry Bollore, is appointed CEO, while Jean-Dominique Senard, then-CEO of tire maker Michelin, is brought in as chairman.

Media report that Macron tells Abe he is worried about Ghosn's conditions in jail, criticizing the detention as "too long and too hard."

In his first media interview since his November arrest, Ghosn tells Japan's Nikkei business daily that he is the victim of "plot and treason." He says forces inside Nissan framed him to prevent his plan to further integrate Nissan and Mitsubishi with Renault. The plan was to fold the carmakers under a holding company, he says, adding that he discussed the strategy with Saikawa in September.

Still in jail after nearly three months, Ghosn fires his first lawyer, a former public prosecutor, and hires Junichiro Hironaka. The high-profile defense attorney is nicknamed "The Razor" for his combative approach and his success at cutting to the core of cases and winning his clients' freedom.

Renault scraps $33 million in deferred and severance pay for Ghosn. Reuters reports that such a golden parachute is politically problematic in France, where Macron's government is under siege by "yellow vest" street protests against social inequality.

Ghosn is granted bail at $9.2 million, an amount he pays in cash.

Ghosn in disguise as he leaves jail.

Ghosn walks to freedom after 108 days in the Tokyo Detention House. He attempts to evade paparazzi by disguising himself as a workman leaving the jail grounds in a commercial minivehicle, but he is quickly recognized, and a media circus envelops Tokyo as news helicopters and media motorbikes tail him through the capital's streets for live coverage.

REUTERS
A “new start” for the alliance on March 12. From left, Renault’s Thierry Bollore and Jean-Dominique Senard, Nissan’s Saikawa and Mitsubishi’s Osamu Masuko

Relations among the alliance partner companies have strained over the Ghosn affair. In an effort to soothe matters, the heads of Renault, Nissan and Mitsubishi meet in Yokohama, Japan, to announce a new power-sharing agreement that charts a "new start" for the auto alliance.

Ghosn takes to Twitter, opening an account and writing in his first post that he will "tell the truth about what's happening" at an April 11 news conference, amid reports that Japanese prosecutors may level fresh charges against him.

In an early-morning raid on his Tokyo apartment, Ghosn is arrested for a fourth time, on allegations of financial misconduct, in a move that escalates the legal jeopardy facing the ousted auto executive as he awaits trial in Tokyo. Prosecutors charge him with breach of trust, saying he caused financial damage to Nissan by misappropriating some $5 million for personal use. Their filing alleges Ghosn arranged to have about $15 million transferred from a wholly owned Nissan subsidiary to a bank of an overseas sales representative from December 2015 through July 2018. Ghosn is sent back to the Tokyo Detention House.

At an extraordinary meeting, angry shareholders blame Saikawa and the current management for allowing Ghosn's alleged misdeeds to happen in the first place.

The band plays on

Management changes, a shift in strategy and a new business plan haven’t resulted in a turnaround at Nissan. One year after Ghosn’s arrest, Nissan reported its fiscal 2nd-quarter results. Operating profit tumbled 70% in the July-September quarter, forcing the carmaker to slash its earnings outlook for the full fiscal year.

Ghosn releases a video statement recorded before his latest arrest, speaking out about the charges against him and bashing Nissan's current management for driving business into reverse and then "selfishly" protecting their own jobs by instigating a "backstabbing" coup to remove him from office. Without naming individuals, a calm and collected Ghosn says their own fear of losing control — as Nissan marched toward a merger with Renault — spurred them to hatch a plot against him.

Japanese prosecutors indict Ghosn for a fourth time, on the breach-of-trust charges stemming from his April 4 arrest that he misappropriated $5 million by siphoning money through a third company "virtually owned by him."

Ghosn leaves jail for a second time, after 21 days, on $4.6 million bail. More stringent bail conditions are applied that prohibit Ghosn from having contact with his wife, Carole Ghosn.

The Ghosn road not taken

In a bombshell development, Renault and Fiat Chrysler Automobiles confirm they are in talks for a 50-50 merger. The move blindsides Nissan, which was left out of the discussions. Nissan withholds initial support for the idea, rattling the resolve of the French government, Renault's biggest shareholder. FCA withdraws the merger proposal June 6, blaming "political conditions" in France.

Nissan shareholders approve sweeping reforms to improve corporate governance at the company's annual shareholders meeting. Renault's Senard, in attendance as the newly appointed vice chairman of Nissan, pleads with skeptical shareholders to believe he has the automaker's best interests at heart.

Ghosn representatives hastily call a late-night press conference that would be his first opportunity to speak publicly in person. The plan is scrubbed just hours ahead of time, with people close to Ghosn saying there was fear of retaliation from prosecutors.

Ghosn agrees to pay $1 million to settle, without admitting guilt, a separate U.S. Securities and Exchange Commission complaint that he hid some $140 million in future payouts over nearly a decade. Kelly, the former Nissan director accused of conspiring with Ghosn, agrees to a $100,000 penalty in a similar settlement. Nissan as a corporate entity agrees to pay $15 million.

Clotilde Delbos had put herself forward for the CEO job but was not certain to feature on the shortlist of frontrunners.

Renault's board removes Bollore, a longtime Ghosn protege, as CEO and names CFO Clotilde Delbos as interim chief executive. Bollore reportedly had icy relations with Nissan management, and the shuffle is seen as an attempt by Senard to patch up relations.

In a long-shot gambit, Ghosn's lawyers petition the court to dismiss the charges against him, arguing that prosecutors violated Ghosn's rights by engaging in such activities as illegal evidence collection and conspiring with Nissan to frame him. As of last week, the court had not replied, but it did reject an appeal to loosen Ghosn's bail restrictions so he might contact his wife. His lawyers say they do not expect his trial to begin until April at the earliest.