A unifying force in the fight of a lifetime

November 29, 2020 07:00 PM
Michael Martinez
Print
BLOOMBERG
"I've always believed we should be looking long term. I feel like I'm working for my chlidren and grandchildren. Because of that, you have to ask yourself, what kind of world are they going to come into and inherit?"
Bill Ford

DETROIT — Over the course of a few frantic days in mid-March, as the coronavirus was spreading across the U.S., the Detroit 3 and UAW made the bold decision to collectively shutter North American manufacturing operations.

The wholesale shutdown was unprecedented. So too was the way it happened: three rivals, with icy relationships even in the best of circumstances, hopping on conference calls to make a collective decision against a dire threat.

That those talks went smoothly, or even happened at all, can be credited to Bill Ford, executive chairman of Ford Motor Co., and it's among the reasons he was selected as Automotive News' 2020 Industry Leader of the Year. 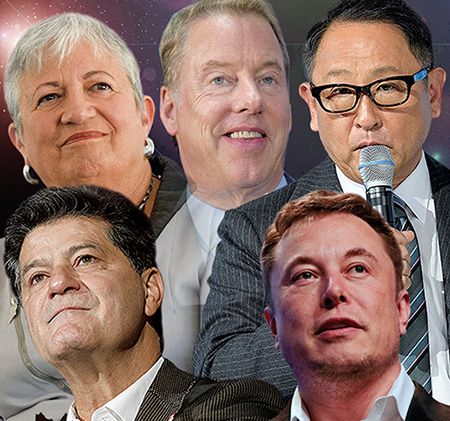 Ford is the scion of Michigan's most famous automotive family; his Rolodex runs deep. He's forged relationships with government leaders and industry officials throughout his four decades working for the company. By his own estimation, he's lived through six major crises.

"You just realize you're never dealing with perfect information, so the more communication you have, the better," the 63-year-old Ford said in an interview last month. "Everybody had questions and nobody had answers. I felt in that environment it was important we come to some common understanding so that particularly the UAW wasn't hearing one thing from Ford, one thing from GM and one thing from Fiat Chrysler. I felt I was in a good position to help."

"When you're trying to pull three companies together, you have to be careful what you even talk about because you can step on land mines without realizing it," Ford said. "But I've been through that so many times I felt I was pretty well prepared to help lead those discussions. GM and FCA weren't exactly on the same page on a lot of items. And so, I felt I was kind of Switzerland and could help pull it together."

Helping coordinate the Detroit 3's coronavirus response might be Ford's greatest accomplishment in a turbulent year that's seen him appoint a new CEO, launch a slew of key products, break from the Trump administration over regulatory policy and oversee the automaker's implementation of a global effort to manufacture medical equipment to fight the virus.

BLOOMBERG
“I felt I was in a good position to help,” Ford said of coordinating the Detroit 3’s response to the coronavirus pandemic.

The virtual gatherings quickly morphed into a way for workers to get to know their executive chairman in a new way. Many ended with casual Q&A sessions in which employees would ask about books or other trinkets in the background. Ford and other top executives have continued to host the town halls on a regular basis as employees continue to work remotely.

"I love doing that, although I don't love the circumstances that spawned that," Ford said. "I get so energized when I'm with our people. To me, the weekly town halls were a highlight during a really tough period."

Another highlight? Witnessing employees step up to manufacture masks, gowns, ventilators and respirators as part of a pivot to personal protective equipment known internally as "Project Apollo."

"I remember one person saying to me he had always regretted he hadn't served in the military and this was his opportunity to give back," he said.

"There was another lady whose mom was a Rosie the Riveter and this was her way to give back. Another lady was telling me her daughter was a front-line nurse and she felt by doing this she was just basically trying to keep up with her daughter in terms of doing her part. It was really heartwarming."

The company's work culminated in a May visit from President Donald Trump to its Rawsonville Components Plant in Ypsilanti, Mich. While most of the headlines centered around whether the president would wear a mask — he briefly donned one during a private tour before taking it off during the public portion — Ford said it was a proud moment he'll remember fondly.

"One thing I reminded all our employees about on that day — look, regardless of where you fall on the political spectrum, it's an honor to have the president of the United States come thank you for everything you've done for the country," he said. "I felt really great about Ford that day."

The president may have hailed the automaker as a "national treasure" that day, but his relationship with Ford behind the scenes wasn't as complimentary.

Ford, along with other automakers, in 2019 broke with the Trump administration in standing with California for stricter emissions regulations. Trump and Ford have spoken a number of times in the past, but the president's visit served as a chance to voice his displeasure in person.

"He wasn't very happy," Ford said of Trump. "Yes, he did [mention it]. I explained to him that it's the right business decision and that frankly, if we have to engineer things twice — Product A for certain states, Product B for the rest of the states — it's not a great position to be in. We want to do it once, we want to do it well and if we do it the way we're proposing, it will satisfy all 50 states. He disagrees, and that's fine."

Ford says the decision makes business sense, especially as it ramps up its electric vehicle offerings. He also felt it was the right decision ethically, despite the political implications.

"I've always believed we should be looking long term," he said. "I feel like I'm working for my children and grandchildren. Because of that, you have to ask yourself, what kind of world are they going to come into and inherit?"

One of the vehicles that will help Ford meet those stricter standards will be arriving on dealer lots within weeks: the Mustang Mach-E.

Ford was reluctant to allow the team to use the Mustang name on a crossover, but he quickly came around after testing it, and the first production GT model is bound for his garage.

“I thought the prototype of the Mach-E was the best prototype I’ve ever driven in my entire career,” he said. He recently spent time driving a preproduction model, noting how “pleasantly surprised” he was by how fun it was.

Other drivers noticed, too.

One of the key architects of the vehicle who helped convince him it was worthy of the name was Jim Farley, who became CEO on Oct. 1. Farley is the fifth CEO to work under Ford since he became executive chairman in 1999 (Ford himself was CEO from 2001 to 2006). Ford praised his intellect, passion for the industry and ability to think ahead about future challenges.

“I’m very confident he’s going to do a really good job,” he said of Farley. “I’m really excited to work with him. At age 63, I have to put my track shoes on to keep up with him. But that’s good, I like that challenge.”

Highlights from the latest 'Daily Drive' podcasts, May 9-12

Recommended for You
Highlights from the latest 'Daily Drive' podcasts, May 9-12

Elon Musk says the Twitter deal is temporarily on hold