November 07, 2021 07:00 PM
Lindsay VanHulle
Print
David Green, left, a former Marine, and Juan Barnett, right, who was in the Army, say they have big aspirations for TrueCar’s initiatives.

David Green and Juan Barnett are colleagues with a shared mission: helping military veterans get into a vehicle.

Green and Barnett work for vehicle listings company TrueCar Inc. on an auto-buying program, TrueCar Military, geared specifically to service members, veterans and their families. Both are passionate about another TrueCar initiative, DrivenToDrive, which has donated a new — in some cases retrofitted — vehicle to a disabled or injured service member each year since 2016.

Their passion stems from the fact both are veterans themselves: Green, a Marine Corps corporal who served in Operation Desert Shield and Operation Desert Storm in the Gulf War; Barnett, an Army specialist who worked on a small policy team in Washington, D.C. Both found their way into automotive retail after leaving the military, albeit through different paths.

"It's almost like you give someone a new lease on life when you give them something as simple as a vehicle that they can get into on their own and just go, even if it's for a morning drive," Barnett said. "A lot of us take that for granted." 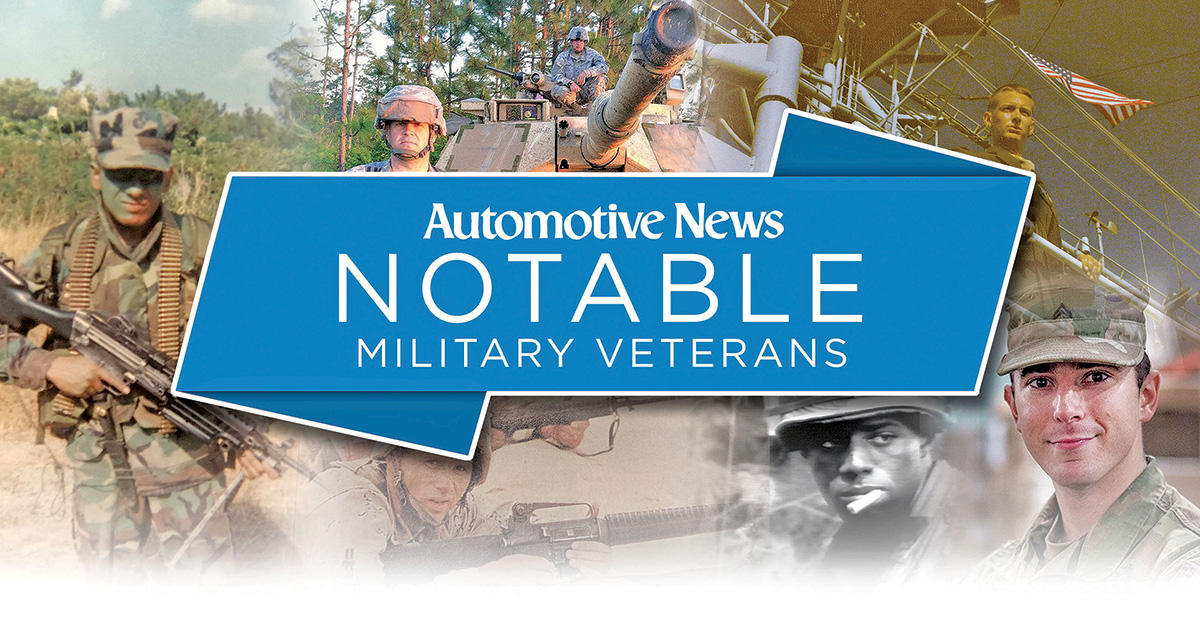 NOTABLE MILITARY VETERANS: Automotive News’ inaugural list of notable industry veterans features 15 people who served in the U.S. Army, Navy, Air Force or Marines who are making a difference in the auto industry. The honorees work in all corners of the industry. Many of them help other veterans transition to civilian life. There’s one common trait among them — they tap the wisdom and experience gained from their time in the military to help solve today’s auto industry challenges.
Notable Military Vetarans >
Service start

Barnett, 40, joined the Army in February 2001 while he was a student at Ohio State University. He spent six years on active duty and in the National Guard. He never deployed overseas but worked on the policy team in the nation's capital while in uniform. He stayed in Washington after he left the Army in various policy roles, including with the Department of Defense and on Capitol Hill as a congressional staffer.

His policy work included health and safety issues, such as veterans' mental health and access to care. On the side, he became interested in automotive policy and safety and started an automotive blog, which he said led to a connection with former Hyundai Motor America CEO John Krafcik, who became TrueCar's president in 2014.

Barnett joined TrueCar's ALG subsidiary in 2015 as a junior analyst working on residual values before moving into other roles within the company. Today, he is director of military marketing and growth at TrueCar.

Green, 52, enlisted with the Marines at age 17 in 1987 and deployed to the Middle East during the Gulf War. When he left the military in 1991, Green said, he landed a job selling cars the next day.

That was the beginning of a 24-year career in auto retail. Green said he found the dealership performance-based environment fitting with the work ethic he developed in the military. Before he joined TrueCar in 2015, he was managing partner of Showcase Honda in Phoenix, a job he transitioned out of when billionaire Warren Buffett's Berkshire Hathaway Inc. purchased Van Tuyl Group, which owned the store.

TrueCar executives say the new program will allow it to reach a larger group of military service members and veterans than it could through the USAA partnership, which had comprised about 30 percent of vehicles sold to buyers who connected through TrueCar's network.

"Whether you're a veteran, active duty, a reservist or immediate family, our goal is to be that name of choice," he said.

Green and Barnett say they have bigger aspirations for both the auto-buying program and DrivenToDrive. The company plans to increase marketing support of its military initiatives, including testimonials from veterans who have purchased vehicles through the program, Green said.

And Green said DrivenToDrive, which will give away its sixth vehicle Tuesday, Nov. 9, plans to expand to two vehicles in 2022 — to a veteran around Veterans Day and to a gold star family around Memorial Day — and has a goal of one per quarter by 2023.

Currently, the program is supported by TrueCar in partnership with the Disabled American Veterans and Team RWB organizations and AutoNation, the nation's largest new-vehicle dealership group.

"I hope, if anything, this program just becomes a catalyst for awareness," Barnett said. "And yeah, we'd like to serve a lot more people. And hopefully, at some point, someone's knocking on the door saying, 'Hey, we want to give. We've got 10 trucks here. What do we have to do? Where do we have to park these so you can give them away?' "

Sponsored Content: Video | Infomedia CEO on navigating the impact of digital transformation in the automotive industry