Dealership staffers were affected in different ways, depending on their job description and location, Hendrick Automotive President Greg Gach told Automotive News. Some business development center employees could continue to follow up on leads remotely, for instance, but technicians could not work if their store's service department was closed.

What started in California would become a policy across all of the privately held group's dealerships in 11 states, Gach said. Employees were guaranteed at least 80 percent of their average pay in January and February, a program that ran through June. Since then, Hendrick has offered supplemental pay for employees who have tested positive or been exposed to COVID-19 and are required to self-quarantine and can't come to work, he said.

"We're proud of what we've been able to do so far to help our folks as best we can," Gach said.

Hendrick, with 15 stores on this year's Automotive News Best Dealerships To Work For list, is among several retailers in the 2020 class that acted to preserve employee pay during state-mandated business restrictions in the spring. Some dealerships — particularly their sales departments — were considered nonessential services in numerous states, meaning sales often had to be conducted online or remotely or not at all during the early weeks of the pandemic.

Even in states that allowed showrooms to stay open, some dealers said business fell sharply in the early spring, affecting employees' earnings. Several of the Best Dealerships To Work For winners said they guaranteed pay based on past earnings, increased hourly wages or moved commission-based workers to a salary model to support them through the pandemic-induced downturn. 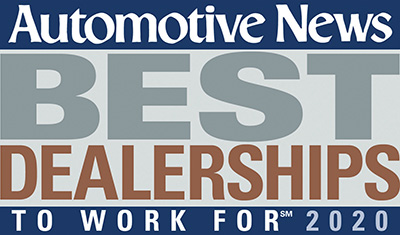 Adam Robinson, CEO of dealership recruitment technology company Hireology, said that he has heard of dealerships on both ends of the spectrum, from those cutting pay and furloughing employees to those guaranteeing compensation if employees' earnings dropped below a set level. Those actions varied by dealership group and geographic market, he said.

"One dealer we know — that we've worked with for years, actually — gave a one-time bonus when COVID hit to provide a safety net and support the employees," he said.

Hireology said it plans to survey dealers this year about compensation and benefits in the wake of the pandemic to gather concrete data, which could be released in early 2021.

Among the Best Dealerships To Work For winners, providing a pay boost or guarantee to employees affected by the pandemic was common.

Business began to slow in March, and Arens said he allowed some employees to opt to stay home on a furlough if they had health concerns or needed to care for children or parents. About 30 employees out of a total 170 in Patriot's three stores chose to do so. Those who continued to work in person, regardless of whether they were typically paid hourly or on commission, received a salary for 12 to 16 weeks starting in April before returning to their traditional pay models in the summer, Arens said. Employees' pay increased during that time, as well, to compensate for the extra risk associated with working in person, he said.

"The leadership team was going to take the brunt of it — me first, and then other people," Arens said. "We weren't going to let COVID keep food off of anybody's table."

The federal Paycheck Protection Program, which offered low-interest loans that can be forgiven if employers meet certain requirements, helped some dealerships cover the extra expenses.

Iowa dealer Dave Wright said his decision to preserve employees' pay during the pandemic was partly based on hiring needs.

Wright, dealer principal of Dave Wright Nissan-Subaru in Hiawatha, Iowa, said it has been challenging to find enough qualified applicants to fill several needed positions, from sales to service to the BDC.

So early in the pandemic, Wright decided to keep all employees working and guarantee their pay while he continued to try to hire. Those choices carried his work force through the pandemic. They also helped during an April hailstorm that shut down the sales department for close to three weeks and an August derecho — a series of intense windstorms — that left his dealership without power for nine days.

Sales reps, service technicians and service advisers were guaranteed to make at least as much money as they did on average last year, Wright said. Hourly employees, including administrative and support roles, saw their pay increase by 20 percent as Wright raised base wages by the same in a bid to make his dealership more attractive in his local market. Those changes will stay in place through 2020, he said.

The Paycheck Protection Program helped offset the cost, though Wright said he had planned to make the compensation changes before the loan program was announced.

"We have a lot of great employees here, and I definitely can't do this by myself, so I need to keep them," he said. "I needed to take care of my own people first and keep them employed regardless, before I added anybody new."

Arens, for instance, said his average compensation per employee has increased, but his group's total compensation expenses have not. His work force shrank slightly as some employees left and as Arens redeployed other workers into different roles to operate more efficiently.

An Automotive News survey of the Best Dealerships To Work For winners made clear that efficiency gains were widespread. Nearly 9 of 10 dealerships answering a question about the topic said sales staff productivity had improved during the pandemic.

Said Robinson: "Instead of making $500 a vehicle, they can make $800 a vehicle, and the person actually sells more cars and makes more money. Dealers have found out how to operate with fewer heads per unit so they make more money, the employee makes more money on the car they sell and everybody's happier."

Melissa Burden contributed to this report.