88% of dealerships took PPP loans; now they wait for forgiveness

Early this spring, dealer Don Lee stared into the face of the first pandemic of his lifetime and had no idea what would happen or what to do.

He may have been scared, but he was by no means alone. And when the federal government offered an unprecedented $660 billion economic lifeline for businesses to stay afloat as the coronavirus outbreak took hold, he — like thousands of dealers nationwide — grabbed it.

The Paycheck Protection Program "gave us the confidence to be able to operate the business in a manner that allowed us to keep our employees on as long as we could to keep the business running," said the president of Lee Auto Malls, which operates seven new- and 12 used-vehicle stores in Maine.

Data released last week by the U.S. Small Business Administration and analyzed by Automotive News shows that 16,226 Paycheck Protection Program loans totaling between $7.8 billion and $12 billion were approved for U.S. new-vehicle dealerships in the second quarter.

The number of loans represents about 93 percent of all privately owned U.S. dealerships. The six large, publicly traded retail groups, representing 925 dealerships, did not participate in the program.

According to the loan documents compiled by the SBA, the cash infusion retained at least 761,000 U.S. dealership jobs — though that number likely was higher because a large number of the loans did not specify the number of jobs retained.The loans given to dealers ranged from as little as $39 to more than $5 million, though the data provided was incomplete. The SBA did not disclose the names or addresses of recipients of loans less than $150,000, nor did it identify the exact amount of each loan made that was greater than that figure, instead placing them into one of five tranches:

Several news organizations, including the Associated Press, have sued the SBA seeking a complete release of the loan data. 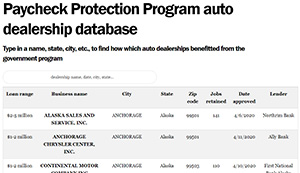 Within the data, the SBA identified 44 loans it made to new-vehicle dealers that were $5 million to $10 million each, including to two Jim Ellis Automotive Group dealerships in Atlanta. Others in the highest tranche of loans include Galpin Motors in North Hills, Calif.; Ricart Properties in Groveport, Ohio; and Regal Automotive Group in Lakeland, Fla.

Lee, one of the dealers who received a loan in the $5 million to $10 million range, said his stores were partially shut down for more than a month, with showrooms closed and unable to conduct any business inside the building because of COVID-19-related restrictions on commerce. The loan, he said, was much needed for his business and its 425 employees during a very uncertain time for all of them.

While about half of his employees were furloughed, Lee used the money, in part, to give them a holiday on health insurance premiums in May and to call all but six of them back to work.

"The reality is, in March, there was a tremendous amount of uncertainty in the market, and in the economy. I know I've never been through a pandemic before in my lifetime," Lee said.

"When we applied for the loan, and by the time we received the funding and did some forecasting on how we were going to use the money, we ended up not needing it all, and we ended up sending about 10 percent of it back," Lee said. "We knew that there were other businesses that hadn't yet received funding or even approvals, so we felt that we would only hold on to the money that we were going to need and not hold on to the money that we weren't going to need."

New-vehicle dealerships took a small fraction of the funds made available by the government’s massive Paycheck Protection Program, designed to help millions of U.S. businesses and their employees weather the COVID-19 pandemic. The Small Business Administration last week released data showing which dealers took out the forgivable loans.

Because of the way the loan rules were constructed by Congress and the Trump administration, groups with several dealerships could apply for the loans on behalf of individual stores instead of the group as a whole. A look at the data suggests several of the nation's largest and most successful privately owned auto retailers — such as Ken Garff Automotive Group, Prime Automotive Group, David Wilson Automotive Group and Napleton Automotive Group — took advantage of the rule.

"GPB Capital Holdings LLC received $1.3M in PPP loans. Both the application and use of funds were in direct accordance with the SBA guidelines," GPB, the majority owner of Prime, said in a statement.

All employees received their average pay over the prior 12 months, said Earl Stewart, dealer principal. Some employees opted to stay home because of family responsibilities or concerns about susceptibility to the virus, and they were paid as though they were working.

Without the loan, he said he would have laid off employees "just to be prudent." In the worst case, Stewart said that could have included half of his staff. "The loan gave me the confidence not to have to do it," he added, "and I'm glad that it's the way it was."

Virus cases are spiking again in Florida and elsewhere in the country, and health experts caution a second wave of infections is possible in the fall and winter. Stewart said should that occur, he would like to see the federal government revive the Paycheck Protection Program. "It keeps the businesses alive and it keeps the people employed," he said. "That's the perfect scenario."

The program initially required companies to spend 75 percent of their loans on payroll; that was revised to 60 percent in an effort to offer business owners more flexibility to cover other expenses, such as rent. An initial eight-week coverage period was lengthened to 24 weeks.

Some dealerships were able to recall workers who had been furloughed, while others were able to use the loans to avoid furloughs or layoffs altogether, said Robert Davis, a tax partner at DHG Dealerships.

Some auto retailers also were able to continue to pay employees their full salaries, said Kevin Gilbreath, a tax partner at Crowe LLP.

The impact varied across the country, Gilbreath said. Stores in states with high numbers of COVID-19 cases that imposed strict restrictions on showroom operations, such as California, might have faced the most job reductions without the funds, he added.

"The sheer number of people that would have been furloughed without this program — I can't quantify it in a percentage, but I think it would have been a large number of employees," Gilbreath said. "The PPP program really made a significant impact on keeping all of those people paid and off furlough."

Dealerships soon will turn their attention to applying for loan forgiveness, Davis and Gilbreath said. They said it's not yet clear what documentation will be required to fulfill that process.

For some dealers, the forgiveness aspect is a crucial part of determining the success of the program.

"How well the program works and how well we come out of it, of course, will depend on how much forgiveness we get since we've already funded all that to the employees," said John Luciano, managing partner at Street Volkswagen of Amarillo in Texas.

With the program, Luciano said he was able to retain all 62 of his employees and has since added a couple of service jobs as business has picked up. But he said he may not have kept everyone on board if he knew a sizable chunk of the funds would be turned into a loan. "I don't think any of us were looking to go in debt," he said.

Luciano declined to say how much money he received, adding that he's still waiting to have a certain amount forgiven, but he noted the sum was "six figures." SBA data shows his Street Volkswagen store received in the range of $350,000 to $1 million.

Luciano remains cautiously optimistic, despite myriad changes to the program as it was rolled out, such as shifting filing deadlines and the time frame in which funds could be used for payroll.

Like others, Luciano is eagerly waiting to fill out a lender submission form for the loan forgiveness. But lenders apparently do not have a process in place for doing so yet, even though the SBA has a loan-forgiveness application, said Bob Shuman, owner of Shuman Chrysler-Dodge-Jeep-Ram of Walled Lake, Mich. And it's still not clear whether dealers such as Shuman are supposed to wait until a certain date — such as the end of an eight- or 24-week period, or until all of his employees are back on the payroll — before applying for the forgiveness. It's just one aspect of what Shuman, a former attorney with an accounting degree, has called a "stunningly complex" program.

That's not to say it hasn't been a helpful one. "It's helped us immensely," he said, adding that his store would have stayed closed if not for the aid, which was in the $350,000 to $1 million range, according to the SBA data.

Michigan was among the strictest states in the U.S. in terms of how dealerships were allowed to operate at the onset of the pandemic. Dealerships were forced to close all sales operations March 24, before being allowed to conduct online sales beginning April 9. In-person sales were given the go-ahead on May 26.

Shuman applied for the funds early on, concerned that there was not going to be enough money for everyone. He tracked the meandering process with a hefty amount of anxiety.

He got a call on the morning of Easter Sunday, April 12. It was his banker, calling to tell him his loan had been approved, and he would have the money that Monday.

"And it was, it was crazy," he said. "It was the most stressful thing I've ever done."

Now, the anticipation has turned to what happens to the money that has been doled out.

Shuman likened it to another race, just like the one that involved businesses initially lining up to get the funds. "When the forgiveness flag drops," he said, "we'll all be trying to get it forgiven."

Digital retail will be key even beyond crisis
Sponsored Content: Trade-Ins Built on Trust