The 2023 Crown — blending a sedan, coupe and crossover — is just the beginning of what Toyota says will be additional body styles that wear the Crown badge.

The Crown is back in Toyota's U.S. lineup for the first time in decades. The 2023 version is a replacement for the Avalon, Toyota's flagship sedan.

It is available with only two hybrid powertrains: one tailored to fuel efficiency and another aimed at performance without completely ignoring fuel economy. The standard 2.5-liter hybrid four-cylinder is available on Crown XLE and Limited trims, while the Platinum trim uses the Hybrid Max, a 340-hp turbo four-cylinder and hybrid electric powertrain.

Both feature a standard electronic on-demand all-wheel-drive system that sends power to the rear wheels via an axle-mounted electric motor that engages when needed for extra traction.

Toyota estimates the standard hybrid will deliver up to 41 mpg combined, while the performance-tuned version, which it says delivers a combined 340 hp, will get an estimated 30 mpg combined.

The 2023 Crown — a blend of sedan and coupe and crossover — is just the beginning of what Toyota says will be additional body styles that wear the Crown badge.

Journalists recently drove the 2023 Crown for the first time and we've sampled and rounded up some of the early reviews.

"My first taste of the 2023 Toyota Crown came by way of a Hybrid Max-equipped Platinum model on the twisting back roads outside of Franklin, Tennessee. Despite the sedan's somewhat ungainly proportions, it's clear from the moment you sit inside that the Crown is not the crossover it appears to be. The seats offer a huge amount of height adjustment, which means you don't have to sit as high in the greenhouse as you'd expect. A push-button start wakes the Crown up, placing it first in full-electric mode, with the gasoline engine only kicking on when your right foot demands more horses than the motors are willing to provide. Pulling away from the staging area, the car immediately felt like a familiar hybrid experience from Toyota. Depress the go pedal a bit harder, and the Crown pulls down the road with an authority that no Toyota hybrid has been capable of before. Torque arrives instantly, with the gearbox ripping off quick shifts. The car did notably deny downshifts on more than one occasion, particularly in low-speed corners where some additional grunt on the way out would have been appreciated. It doesn't help that the engine doesn't really sound like much of anything, with only the occasional turbo noises to let you know what's going on under the hood.

"Thanks to the Platinum's full-time electronic all-wheel drive system, the high trim Crown model has a sure-footedness that's missing from the Camry or Corolla. The system is able to modulate between a 70:30 and 20:80 front-rear power split, bringing the sensations of a traditional rear-driver into the equation. Combined with the healthy output, it's clear this new Hybrid Max powertrain is intended to bring excitement, while sacrificing outright fuel economy."

"One big reason to stick with the base powertrain is its estimated fuel economy. Toyota estimates that the lower tiers of Crown will achieve 42 mpg city, 41 mpg highway and 41 mpg combined. For something as large and heavy (north of 4,000 pounds) as the Crown, being this efficient is a great notch for the bedpost. In my brief drive around Nashville, Tennessee, I found these figures sufficiently easy to match.

"Those looking for something with a bit more punch will find it on the Crown's Platinum trim. This flagship variant carries Toyota's new Hybrid Max powertrain. A 2.4-liter turbocharged I4 mates to an electric motor and a six-speed automatic transmission, putting out a solid 340 hp and 400 lb-ft. There is definitely more shove here, and the 2.4-liter sounds better when it's operating, but it's not exactly knock-your-socks-off quick. It also sacrifices a fair bit of fuel economy, with estimates dropping to 29 mpg city, 32 mpg highway and 30 mpg combined — but again, these figures are not hard to achieve.

"In addition to a beefier powertrain, Crown Platinum models also pick up an adaptive suspension system, which can soften or stiffen in different drive modes. The XLE and Limited versions do just fine with the standard fixed suspension, which offers a Venza level of cushiness that I appreciate, so consider the adaptive setup to be the optional sprinkles on an otherwise delightful sundae. There is some body-roll reduction in Sport S Plus mode, not that anyone intends on hustling this thing around switchbacks, but you could if you wanted to. The Crown's plushest Comfort mode is where I prefer to spend my time, softly careening over the road as the dampers soak up most of the nasty asphalt underfoot."

"What's interesting is that despite the significantly altered design, the dimensions of the Crown are not far off from the Avalon, with one exception: overall height. The Crown is about 4 inches taller than either the Avalon or the Camry. But in length, width and wheelbase, it's less than an inch different. Also, all the height is in the body, not with added ground clearance. The Crown has just 0.5 inch more air between the rockers and the road. So although it has a roofline like an SUV, we wouldn't try taking it on anything rougher than a well-graded dirt or gravel road, especially with the standard 19-inch wheels or the available 21-inch examples.

"Perhaps not surprisingly, most of the interior dimensions are also extremely close to the Avalon. Differences in headroom are within an inch of each other and front legroom is identical. It does lose an inch and a half of rear legroom and a couple inches of shoulder room compared to the Avalon. That's all on paper, though. In reality, the Crown's interior feels a fair bit smaller. A major contributing factor is the headroom, which is very tight up front, at least with a sunroof. If you're 6 feet tall or more, you'll be rubbing the headliner. We don't remember this being an issue in the old Avalon, and we suspect the problem here is that Toyota has jacked up the seating position for that SUV-like feel. And that's also why it feels so tight despite the extra roof height. Fortunately, if you get a model without a sunroof, you get much more front headroom."

"The optional Hybrid Max powertrain, available only in the Platinum, more closely aligns the Crown's performance with its bold sheet metal. A turbocharged 2.4-liter four teams up with two electric motors to deliver 340 horsepower and 400 pound-feet of torque, while EPA combined fuel economy drops to 30 mpg. In the Max, the water-cooled rear motor makes 79 horsepower and 124 pound-feet and is always engaged (the base powertrain goes front-drive until the rear wheels need traction). Stacking the gains, Toyota bolts the turbo four to a six-speed automatic that uses a wet clutch instead of a torque converter. Hello, silky rev-matched downshifts. Intriguingly, the clutch will allow a high-rpm launch-control mode, which Toyota says is in the works and would likely drop the claimed 5.7-second 60-mph sprint even lower. The Platinum trim also gets adaptive dampers that make the Crown a surprisingly willing partner when the road gets twisty.

"... the Crown's cabin is reminiscent of the dearly departed Land Cruiser — not flashy but impeccably assembled with quality materials. It looks as if a scuffed driver's seat bolster might be the only tell when the odometer hits 200,000 miles. The Platinum's leather front seats are heated and ventilated, and the rear seats are also heated. The sleek climate control panel, immediately below the 12.3-inch touch screen, would look perfectly at home in a $100,000 Lexus. The only letdown is the 11-speaker JBL audio system in the Limited and Premium (XLEs get a basic six-speaker system). The JBL sounds as if 10 of its 11 speakers might be tweeters, and yes, we checked the settings and tried different cars. Toyota says the system was 'acoustically tuned for Toyota Crown to match unique vehicle characteristics,' so maybe that means it expects the Crown demographic to listen to crime podcasts and NPR.

"Like the old U.S.-market Land Cruiser, the Crown is built solely in Japan, at the Tsutsumi plant. And perhaps Toyota hopes that the Crown might capture a few orphan Land Cruiser owners in search of that signature anti-brand-snob Toyota luxury experience. Crown pricing starts at $41,045 for an XLE and ranges up to $53,445 for a Platinum. Is that too expensive for a Toyota sedan?"

"The 2023 Toyota Crown is a security blanket disguised as a large sedan, a reassuring automotive hug to drivers discomfited by heavy traffic and the shift from cars to SUVs.
"Its familiar four-door profile and trunk hide a pair of SUVs' most popular characteristics — all-wheel drive for slippery roads and 4.1 inches more height than Toyota's discontinued Avalon for better sightlines and easier entry and exit — in a shape tailored to reassure boomers yearning for the sedans they grew up with.
"Some of the Crown's driver assistance features may be a harder sell to those nostalgic customers, however.
"The Crown is equal parts replacement for the Avalon and spiritual successor to the Ford Crown Victoria, a pair of big sedans that served ably for decades. In its distinctive black-and-white, two-tone finish, the big new Toyota looks a bit like the Tokyo Drift version of a Crown Vic police car.

"Toyota's proactive driving assist is one of the most comprehensive — or intrusive, depending on your perspective — safety features I've encountered on any mass-market vehicle. Part of the standard Toyota Safety System package, it automatically brakes when it senses a vehicle ahead and traffic and on curves. I found it annoying and eventually figured out how to disable it. How Crown owners — who will probably be older drivers — react could go a long way toward determining the sedan's success."

"Sitting in any of the Crown's five seats is like wearing shoes that are half a size too small. It didn't need to be this way, and indeed, I didn't expect such a claustrophobic experience at first glance. The Crown is four inches taller than the Avalon but the ground clearance is only half an inch above its predecessor – one might think there's at most 3.5 inches of extra headroom here, right?
"Instead, the Crown improves on its predecessor by less than an inch in front, at 38.2 versus 37.4, while there's no change in second-row headroom. But for the life of me, I have no idea how Toyota got those measurements. The driver's seat sits on what I can only describe as stilts, which rob the taller cabin of its primary advantage. With the seatback at an angle that allows me to comfortably reach the steering wheel and touch screen infotainment system, my head is brushing the grab handle. If I push the angle back to increase headroom, I'm compromised on legroom to maintain a comfortable grip on the wheel."

"The Crown is going to be successful because it brings in the key elements of the crossover SUV driving experience, paired with the best aspects of a larger sedan. It's got plenty of power under the hood, and its comparatively lower center of gravity will remind drivers of what they always liked about a sedan. Most of all, the slight raised ride height gives drivers that up-high viewpoint they like, without having to climb up to get it.

"Toyota, as usual, has done a great job with regeneration and braking, making the whole Crown driving experience a smooth and intuitive process. There are no 'oh, yeah, that's the hybrid system' quirks that you'll have to learn to live with. You can buy a Crown and forget that it's a hybrid. Just drive it and enjoy the performance." 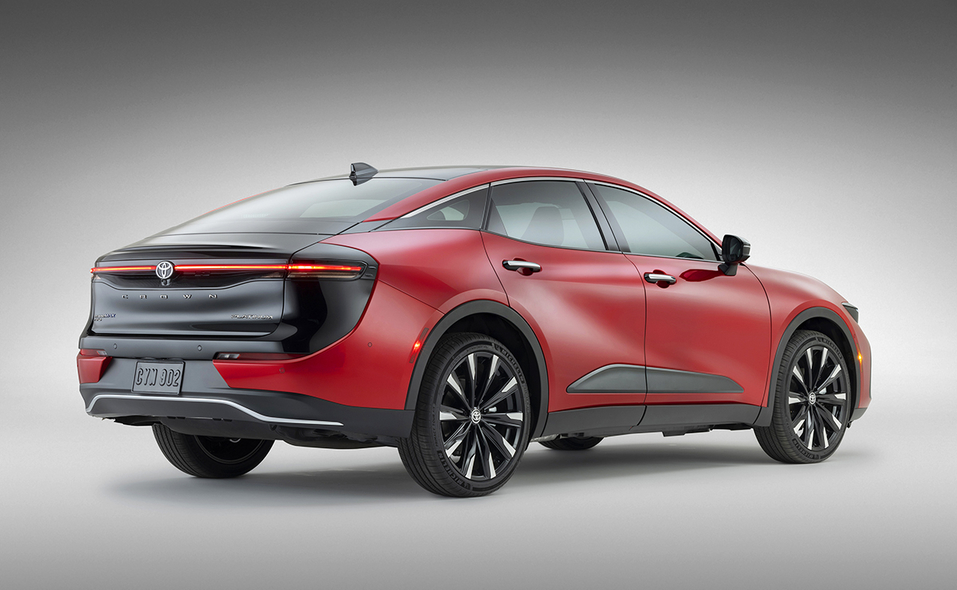 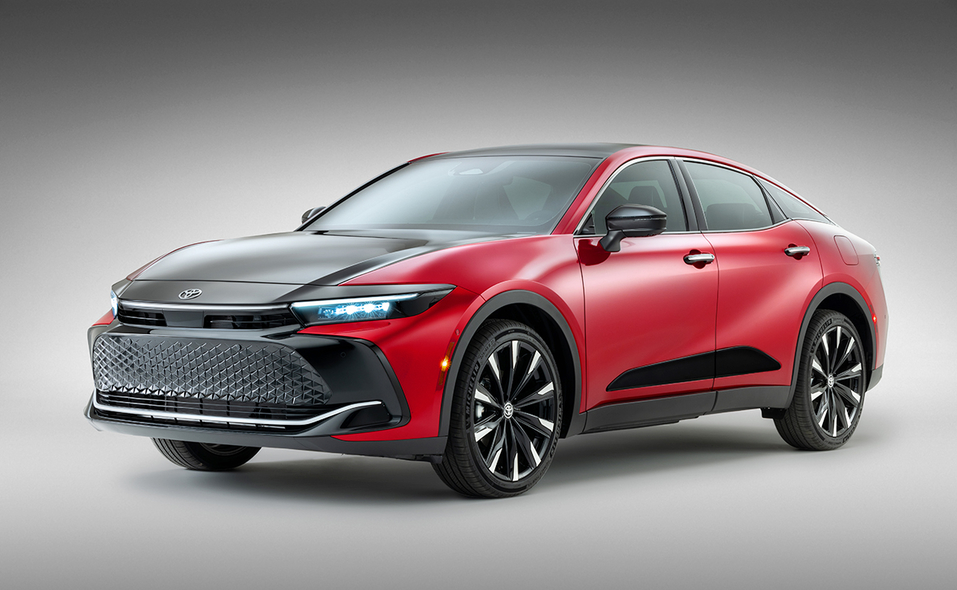 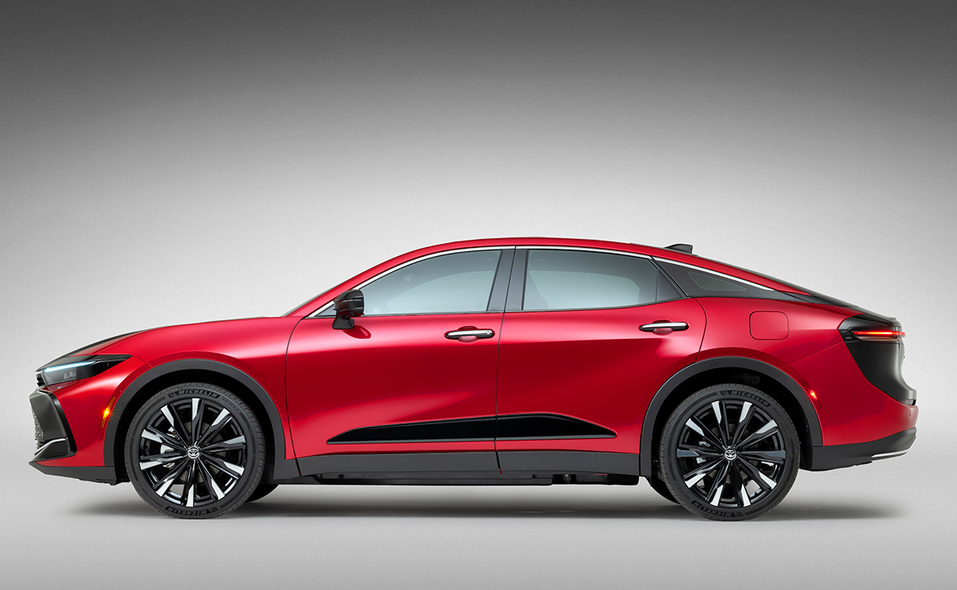 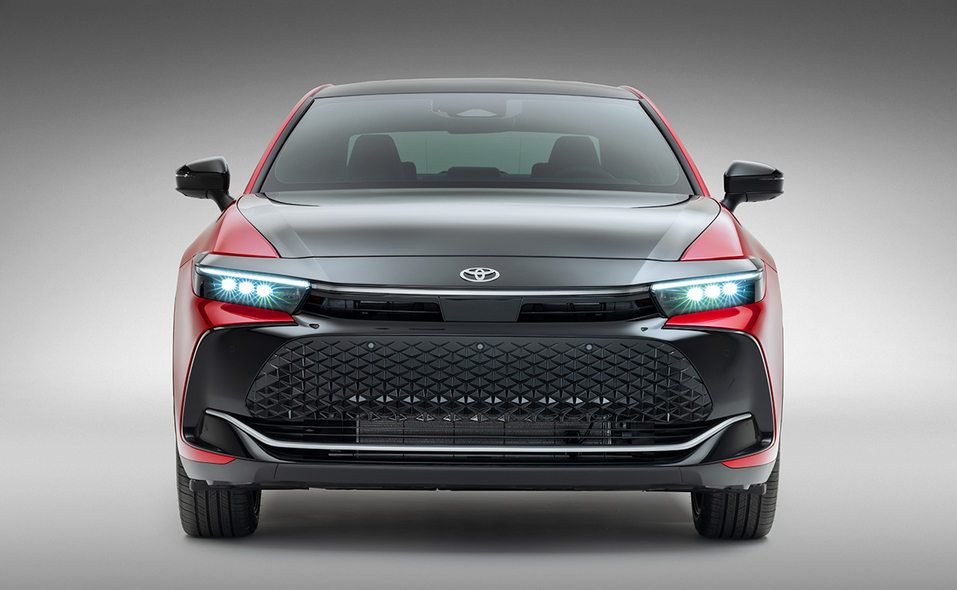 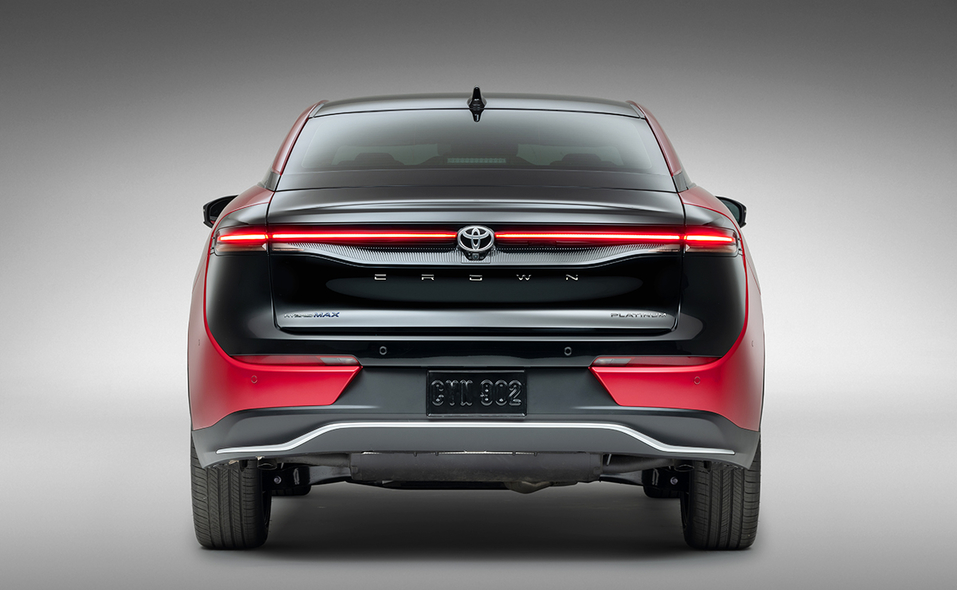 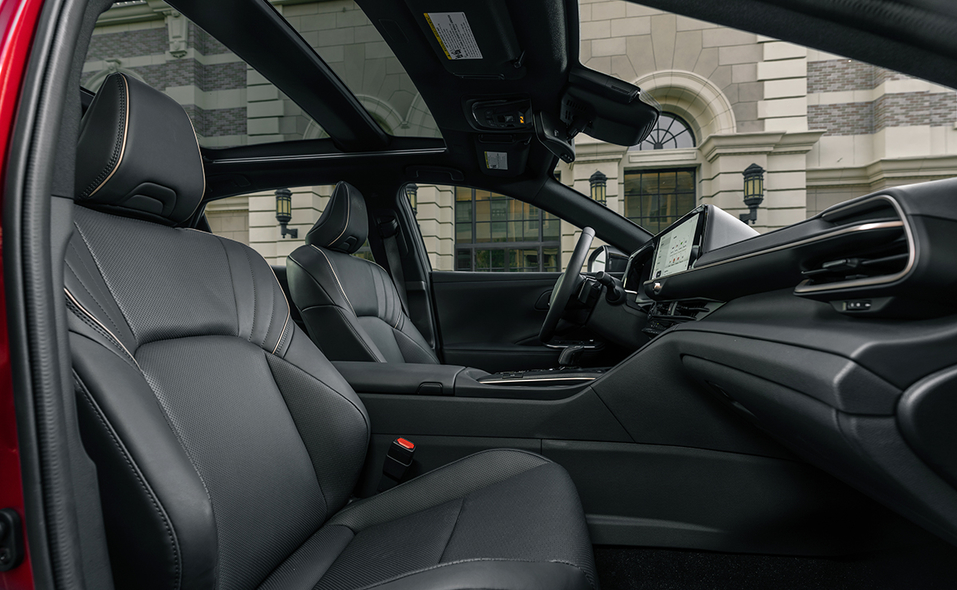 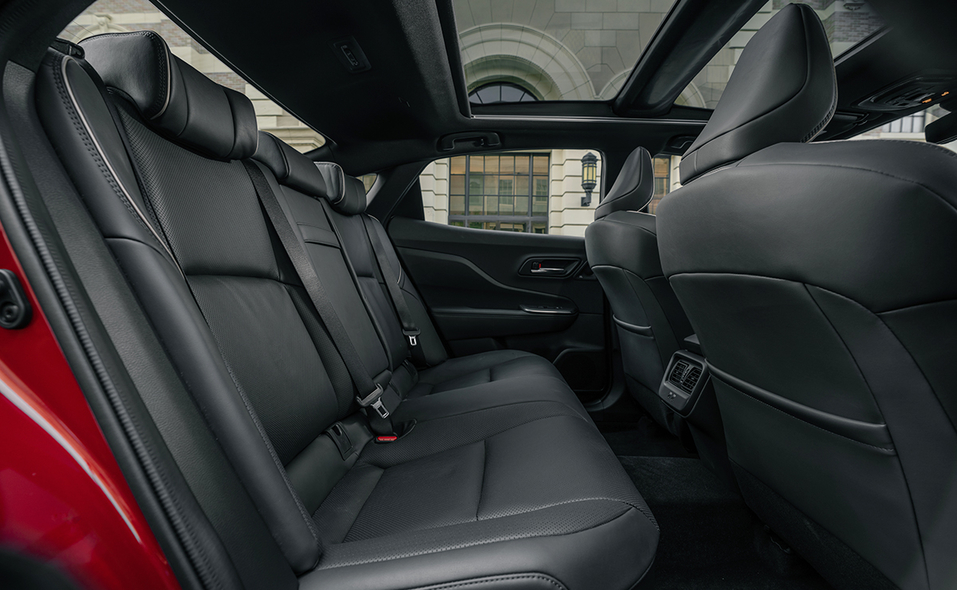 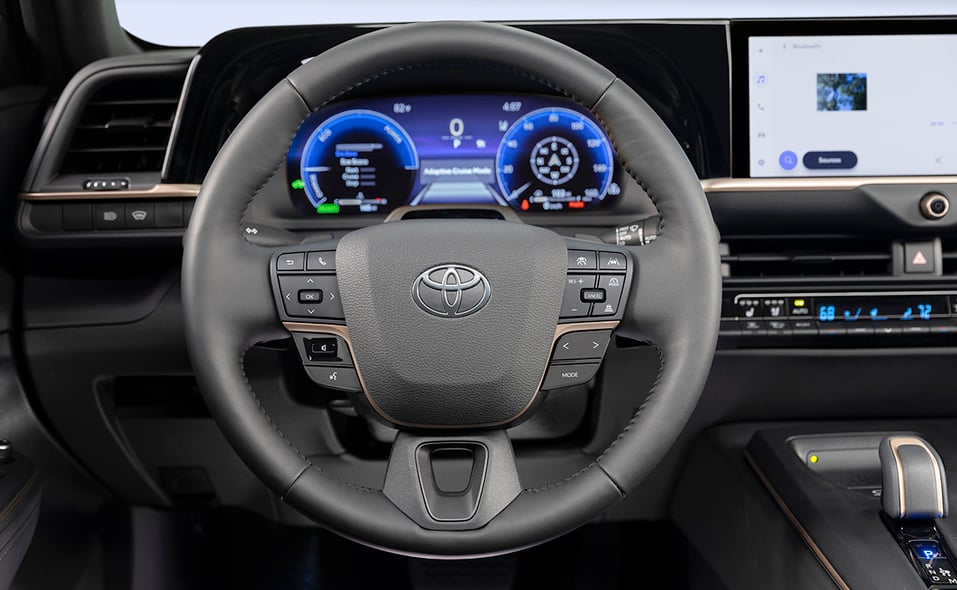