2023 Subaru Solterra reviews: The AWD specialist branches out into EVs

PHOENIX — Subaru's partnership with Toyota Motor Corp. that launched a couple of nifty sports cars, the Subaru BRZ and Toyota 86, is going in a new direction that is more suited for the all-wheel-drive specialist.

Their latest joint project, a pair of full-electric crossovers developed over the last four to five years, is well timed as 2022 is on pace to be a breakout year for electric vehicles of all stripes.

The 2023 Solterra, Subaru's first EV, is a Latin portmanteau for sun (sol) and earth (terra).

While Subaru is launching the Solterra, Toyota, which owns 20 percent of its smaller Japanese rival, is introducing the similar bZ4X electric crossover.

Engineering and design of the Solterra and bZ4X was handed equally between the two companies, though the crossovers are being assembled at a Toyota plant in Japan.

Like most everything Subaru, the Solterra will only be sold with awd. The bZ4X is available with front-wheel drive and awd.

Subaru owners are eager to protect the planet, so an EV is natural white space for the brand. And because the EV market is still unfolding, Subaru is leaning on a bigger partner to until scale improves.

The five-passenger, four-door Solterra joins perhaps the most crowded EV segment: compact and midsize crossovers. It will be in the company of the Ford Mustang Mach-E, Hyundai Ioniq 5, Volkswagen ID4 and Kia EV6, with more on the way, notably the bZ4X and Nissan's Ariya.

Journalists had an opportunity to drive the Solterra last week in and around Phoenix, in on-road and off-road settings.

Car and Driver calls the Solterra a "homework assignment turned in late," were it not for its off-road prowess.

The Solterra's primary battery pack is sourced from China's Contemporary Amperex Technology Co., the world's biggest producer of EV batteries. The two motors generate a total of 215 hp and 249 pound-feet of torque. The Solterra Premium is rated by the EPA at 228 miles of range on a full charge, with Limited and Touring models rated to go 222 miles.

Using a DC fast charger, the Solterra can obtain an 80 percent battery capacity in 56 minutes. On a Level 2 charger, nine hours of charging time will completely juice the battery. Subaru, which anticipates most owners will charge at home overnight, does not have a free charging program but is working on a partnership with EVgo.

Solterra electric crossover is pure Subaru inside, part Toyota outside
The cabin

Interior space is less than the Subaru Forester by a few cubic feet. Despite the steeply raked rear glass, the Solterra features slightly more cargo space than the Forester. Its large, flat load floor can be arranged at two different heights, Subaru says. And the 60/40 split rear seats fold down to provide even more cargo space.

But there are some quirks.

There is no rear wiper, helping reduce weight and improve aerodynamics. Subaru also nixed a frunk to avoid compromising crashworthiness and maintain some front-end styling cues standard to the brand. And while there is no glove box, there is plenty of storage in front and back.

There are some notable tricks from the Subaru toolbox on the Solterra:

The Solterra will be available this summer, but good luck finding one to buy. Subaru has closed the order books for 2022 and says only some 6,500 will be sold in the U.S. this year. Pricing, estimated to start at around $40,000, is expected to be released in coming weeks.

We've rounded up some early reviews from the automotive press.

"It's not just remarkably quiet for a Subaru, whose flat-4s can run loud with a CVT, it's quiet for an electric car, lacking any motor whir. It's well-insulated from the road as well, with only a bit of highway noise coming from the all-season tires wrapped around the tester's 20-inch wheels (18s are standard). It rides quietly and composed as well, with struts up front and a double-wishbone setup in back, but it can be willowy on undulating terrain. I wasn't pushing it hard on the paved 90-degree intersections outside Scottsdale, but Solterra owners won't mistake this for an autocross car, unless or until the STI performance department gets a shot at it. Steering doesn't provide much feedback, but the small-diameter wheel points and goes where directed.

"Like the drive modes, the five regen brake settings didn't differentiate themselves too much. Paddle shifters adjust four of the settings, and the fifth button is an S-Pedal or one-pedal-drive button in the console. Unlike other EVs, it didn't lurch when I let off the accelerator and doesn't grab the brakes into a stop. At about 3 mph, I consistently had to apply the brakes. Once stopped, it defaulted to a creep mode, likely to simulate a gas car in keeping with the conservative approach of Toyota's — I mean, Subaru's — first electric car. An auto hold button kept it still at stops without the brake."

"Powering the Solterra's pair of electric motors is a 72.8-kilowatt-hour lithium-ion battery pack nestled between the axles. Total output is 218 horsepower and 249 pound-feet of torque, numbers that put the Subaru well below dual-motor examples of the Ford Mustang Mach-E, Hyundai Ioniq 5, Tesla Model Y and Volkswagen ID 4. Even so, this EV has no trouble getting up to speed or quickly passing slower-moving traffic. It just doesn't feel as punchy as its competitors. Even the portly ID 4 Pro is more entertaining to drive.

"That's not really a surprise, though, considering Toyota took the lead on dynamic tuning. The Solterra's steering is as lifeless as any Prius, and despite the low center of gravity afforded by the battery pack's ballast, the Solterra's soft suspension means it lacks the cornering composure of rivals like the Kia EV6 or Mustang Mach-E. At least Subaru offers multiple levels of regenerative braking, selectable via paddles mounted to the steering wheel, and the Solterra's maximum regen level is strong enough to allow for one-pedal driving — something you can't do in an ID 4."

"The 2023 Subaru Solterra will be available in Premium, Limited, and Touring trims, and it comes well-equipped from the start. An 8.0-inch touchscreen is standard, while Limited and Touring models get a bigger 12.3-inch display. Regardless of size, both screens come with Toyota's latest infotainment system, which has Google Maps navigation and is compatible with wireless Apple CarPlay and Android Auto. The system is easy to use, has nice graphics, and offers an 'intelligent' assistant that responds to commands when you say 'Hey, Subaru.' The assistant can change some cabin settings like the temperature and can turn on the wipers, but it requires a subscription to connect to the cloud for Google Maps navigation. The first year of this service is complimentary, but after that owners will have to pay a monthly fee.

"Based on our first drive experience, we'd go for the subscription. For example: Say, 'Hey Subaru, take me to a charger,' and a list of the closest chargers appears on the screen. If you decline the subscription, you'll lose this feature as well as the driving-range estimate to your destination when using the built-in Google Maps. Subaru hasn't announced how much it plans to charge for using the cloud, but Toyota prices its service at $16 per month or $160 per year. We expect Subaru's prices to be similar. ...

"A minor complaint: The digital instrument cluster lies atop the dashboard but far away from the driver, and the steering wheel partially blocked our view of it. Unlike most cars where you see the speedometer through the steering wheel, this layout is designed so drivers see over the wheel. But it didn't work for us. Also, we're not fans of the piano black trim used on the center console; as usual, it's shiny and gets dirty easily with fingerprints."

"The power is on the low-end of the EV scale, especially compared to AWD versions of competitors like the Hyundai Ioniq 5 (320 hp, 446 lb-ft), Ford Mustang Mach-E (266 hp, 428 lb-ft), and Volkswagen ID.4 (295 hp, 339 lb-ft). With that in mind, the Solterra didn't feel underpowered. Its zero-to-60 mph time is clocked at 6.5 seconds. Okay, while not the sub-5 seconds claimed by the Ioniq 5 or the 5.2 seconds attached to a similarly equipped Mustang Mach-E, the Solterra is fast enough on freeway on-ramps to match traffic speeds and passing is not an issue. After all, what Subaru owner is looking for an EV hot rod?

"The steering was precise and effortless. I got no sense of over- or understeer. Turn the wheel one way and the vehicle moves toward that direction. Solterra comes with three drive modes (Eco, Normal, and Power). Traditionally, drive modes make adjustments to steering feel, gearing, torque bands, etc., based on the road conditions or driver preference. In the Solterra, drive modes merely change accelerator response.

"I felt no change in the handling and performance of the vehicle when switching from Eco to Normal. However, when selecting Power, the Solterra did accelerate just a wee bit quicker. It was noticeable enough that every time I'd hit the throttle in Power mode, I'd exclaim, 'Poooweer!' as the Solterra sped up in silence. Yes, it's the little things that bring me joy (and equally annoy my driving partners)."

"This car clearly belongs to the Outback/Crosstrek branches of the Subaru family tree rather than the WRX sect, although it would be easy enough to mount bigger motors and push it in a sportier direction. Despite the lack of outright muscle, the Solterra can route 60 percent of its torque to the rear end, making it feel playful at times. You can also turn the stability control system all the way off, opening possibilities for tail-out rally car antics on gravel or snow. We confirmed that the Solterra is happy to rip a doughnut." 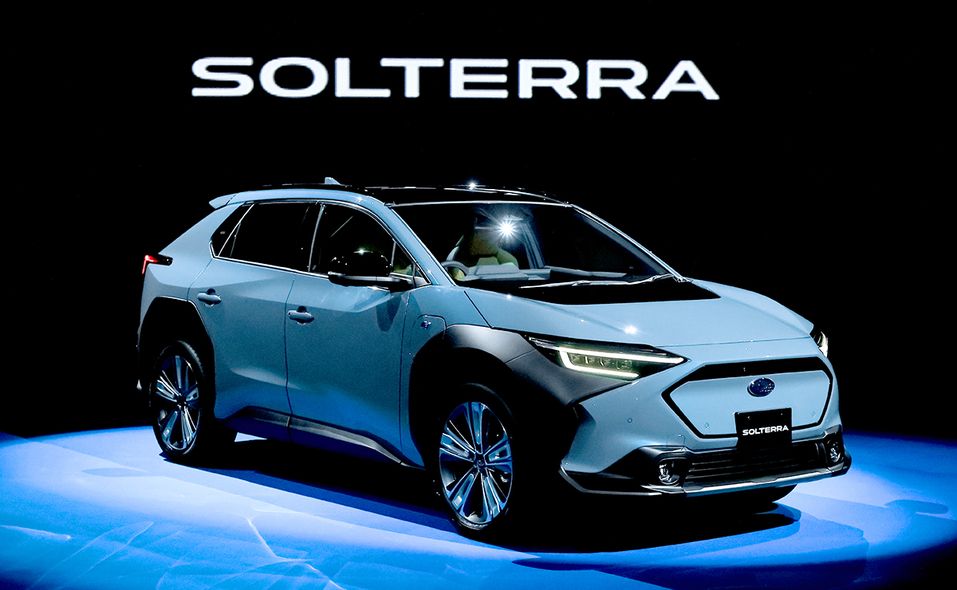 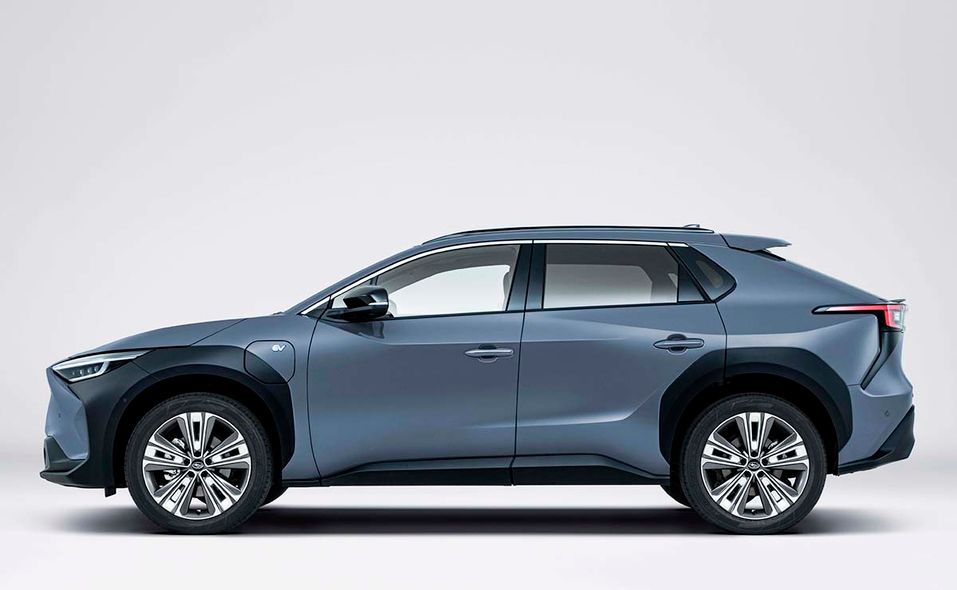 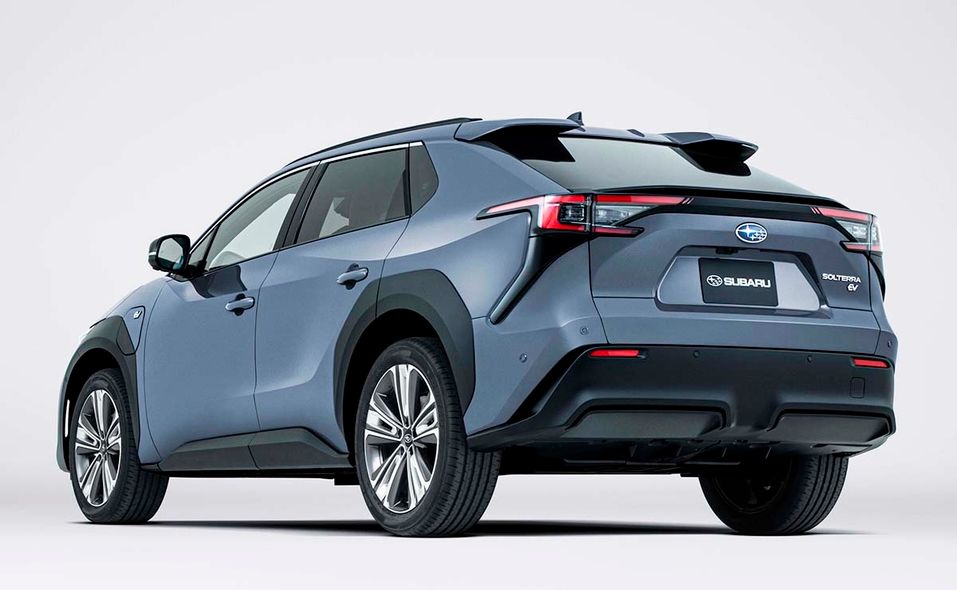 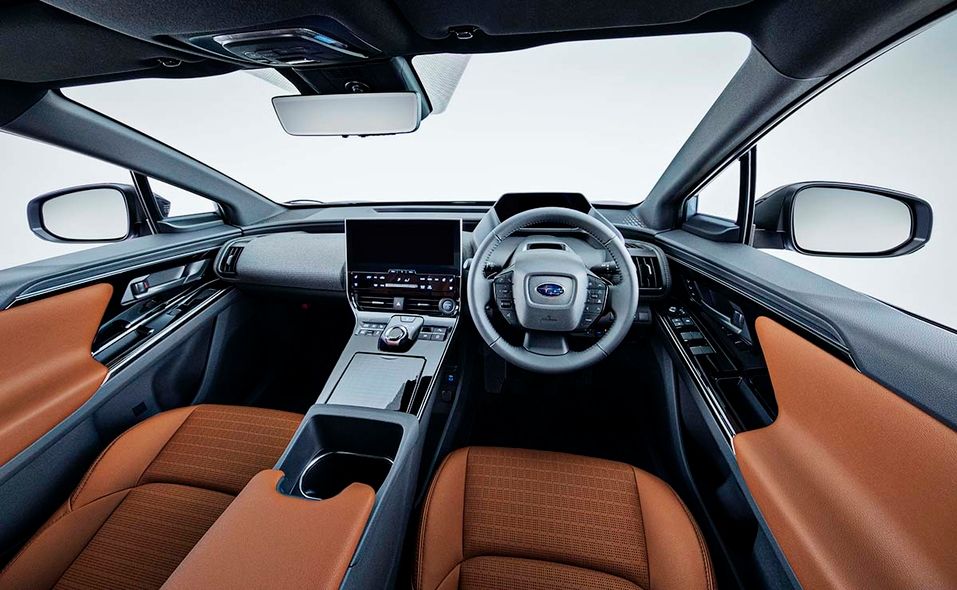 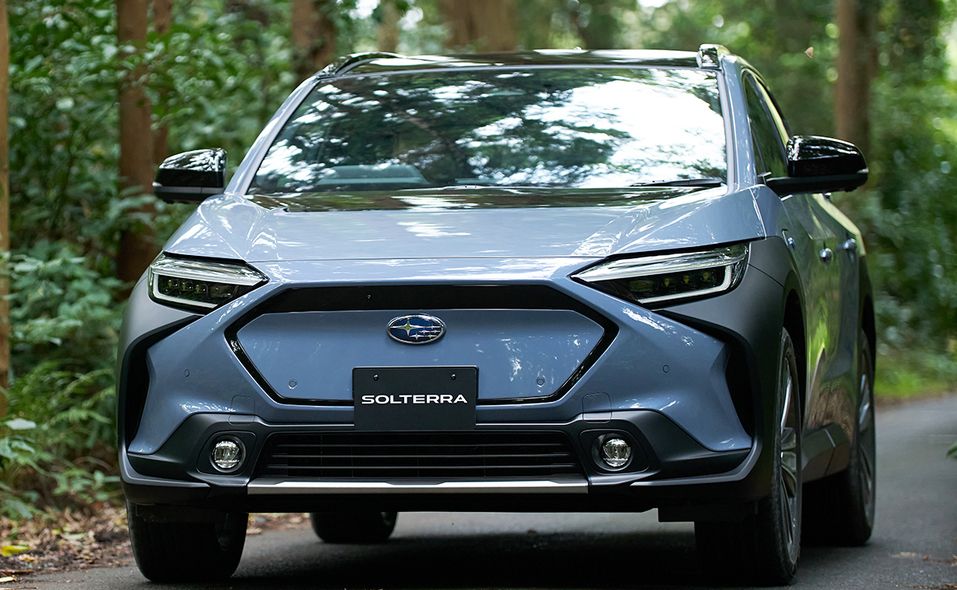 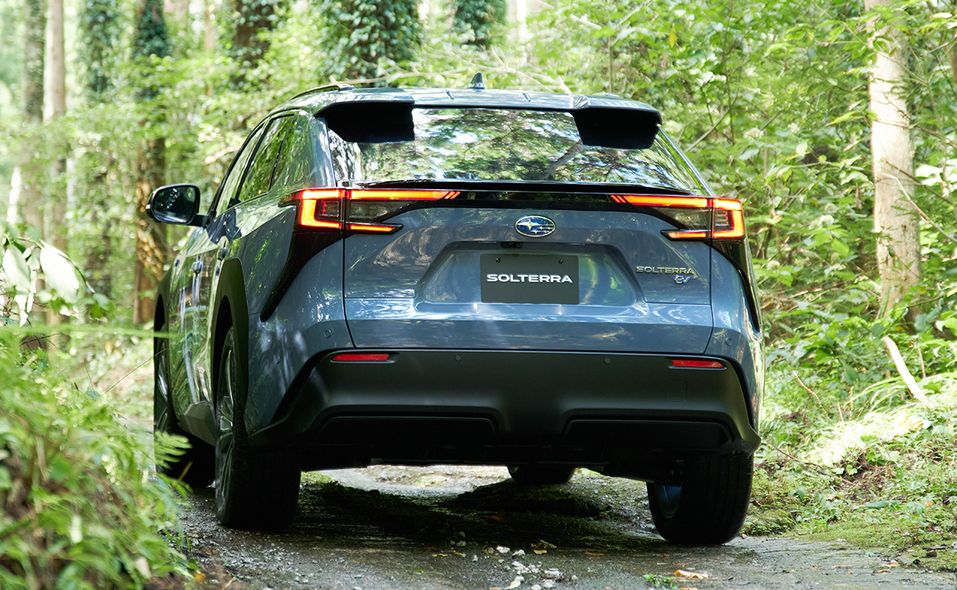 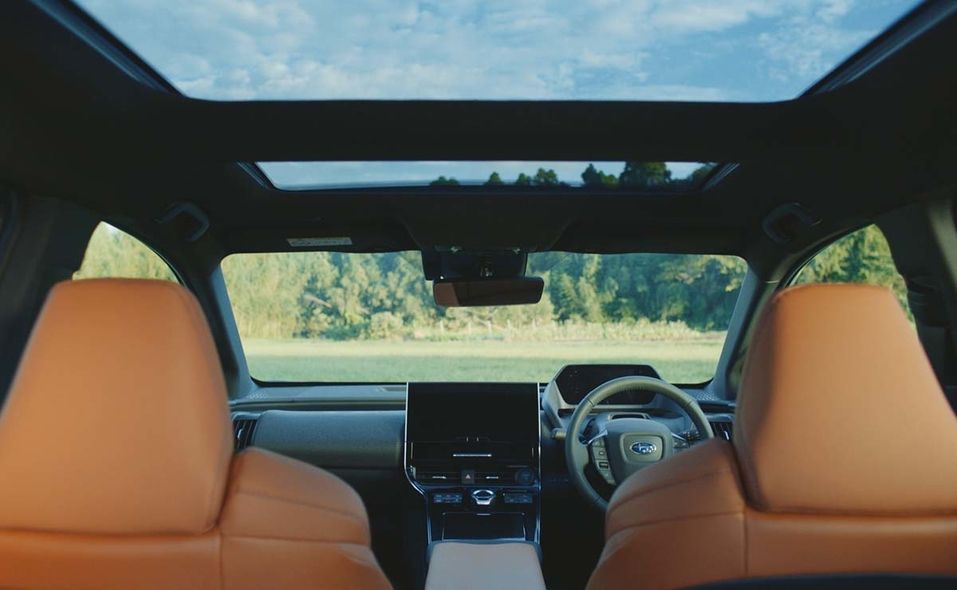 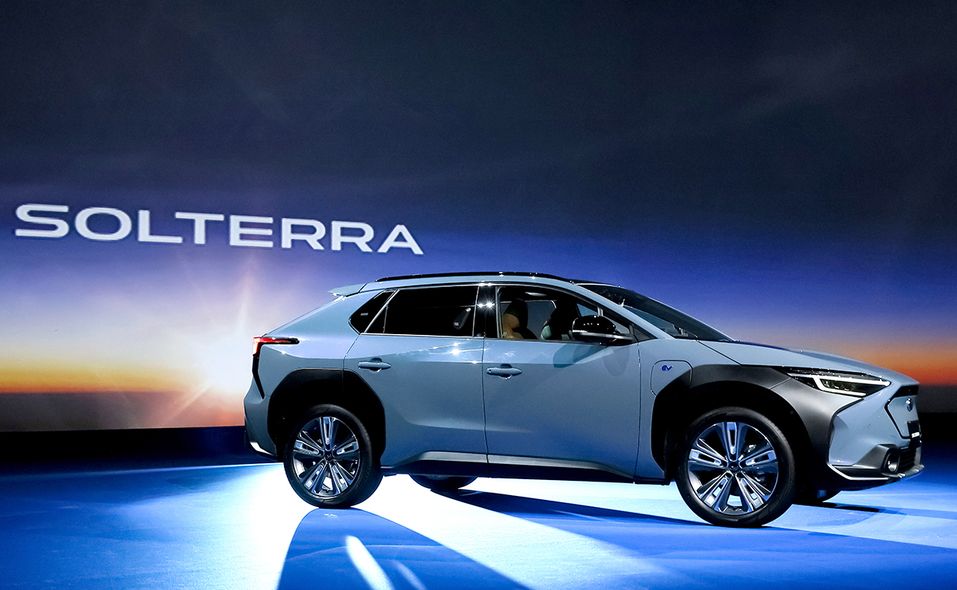