Jeep went a decade without an SUV with a legitimate third row after the demise of the Commander in 2010. But that changed with the arrival of the 2021 Jeep Grand Cherokee L and later with the revival of the flagship Wagoneer and Grand Wagoneer nameplates for 2022.

Jeep has added some frosting to the big SUV recipe with the stretched Wagoneer L and Grand Wagoneer L. They are designed to rival the Cadillac Escalade ESV, GMC Yukon XL, Chevrolet Suburban and Lincoln Navigator.

All of the luxury, technology and safety gear on the standard models remain, but there is more storage in back. The long-wheelbase models offer up to 44.2 cubic feet of cargo space behind the third row, 15.8 cubic feet more than the shorter models.

The L models feature a 130-inch wheelbase, a 7-inch increase from the Wagoneer and Grand Wagoneer.

The third row in the L variants also features a pair of storage compartments, each with 1.8 liters of capacity to hold electronic devices and other items.

We've rounded up some early reviews.

"It is a tale of two designs. The exterior is bland — with no Jeep badging, you might not guess what it is if not for the giant 'Wagoneer' lettering across the back. That isn't by accident; Jeep treats Wagoneer as its own brand. You won't care about branding inside, however, because the interior is a luxurious delight with thick leather, inlaid aluminum 'Grand Wagoneer' lettering in the woodgrain dash, 75.0 inches of available screen area including a co-pilot screen for the front passenger, clever storage, excellent massaging and reclining seats, and a massive amount of space in all three rows. ...

"Propelling this humongous Jeep, the new high-output version of the Hurricane 3.0-liter twin-turbo inline-six delivers 510 hp and 500 lb-ft of torque, and it comes paired with an eight-speed automatic transmission. It's smooth and creamy to drive, providing the right amount of what you need when you need it. The engine's low-end, off-the-line oomph is as good as a V-8's — non-L Grand Wagoneers offer both this I-6 and a 6.4-liter V-8 — and the top-end power is there, as well."

"The twin-turbo inline-six engines have much smaller displacement than the V-8s they replace, yet they'll come with a small bump in both horsepower and fuel economy versus the V-8 models. And how do they perform in these monstrous SUVs? They're fantastic. True, you don't get the iconic burble and roar of a V-8, but that's not so uncommon anymore, either; Ford did away with V-8 engines in the Expedition and Lincoln Navigator some time ago, and Toyota dumped it in the latest versions of the Sequoia and Lexus LX. What you do get is plentiful power, quick responses and, perhaps most surprising of all, nearly silent operation on the highway: Jeep engineers said that at highway speeds, Wagoneers equipped with the new Hurricane engine are nearly 5 decibels quieter than comparable V-8-equipped models thanks to a combination of sound-insulation improvements and engine refinement. This is quite evident from my test drive.

"What the powertrain changes create is a vaultlike feel while barreling down an admittedly smooth highway. You feel some bumps along the way, as both the Wagoneer L and Grand Wagoneer L offer up some big wheels on low-profile tires, but the available air suspension smooths things out nicely, and there's no wind, road or engine noise that intrudes into the serenity of the cabin. Handling is predictable, but there's no disguising the mass here — this is a big, long, heavy SUV, and it behaves as such. Even so, the L models are excellent cruisers. The ride is well controlled and nicely damped, and the steering is accurate. The brakes are especially strong and progressive, inspiring confidence for the driver. The maximum tow rating is unchanged from the prior V-8 models: up to 10,000 pounds for the rear-wheel-drive Wagoneer L and just a bit less than that for the Grand Wagoneer L."

"Along with its rich heritage (the Jeep brand is a global icon, which Wagoneer embraces with American flags tattooed on its flanks), Wagoneer is based on the Ram 1500, already acclaimed as the best-riding pickup in class, courtesy of its independent rear suspension.

"The Wagoneer embraces this advantage by carving out a substantial third-row bench seat. I'm a 6-foot-5-inch ex-college basketball player and could sit behind myself in the second row. Easy headroom, easy legroom.

"Pack up your family of four rugrats for a cross-country drive to Yellowstone and they'll have plenty of real estate in back. You'll have to set some rules so the kids can rotate seats. The second-row thrones offer Amazon Fire TV screens with all their favorite shows, for goodness' sake.

"The third row lacks screens but it's hardly the basement. Each seat gets its own USB port, a cubby that can hold small computer devices and (I love this) its own sunroof. So when the parents decide to close the panoramic roof, third-row coach-class passengers can still sun-worship if they choose.

"For all its upscale tech, however, the Wagoneer Loooong can come up short.

Automakers like GM (Super Cruise) and Ford (Blue Cruise) these days are making long-distance driving easier with semi-autonomous systems. Once the domain of lux chariots like the Cadillac Escalade, they are now available in Suburban and Expedition models. Heck, I even drove a Kia Sportage — at $38K, half the cost of these mega-ute behemoths — hands-free from Gaylord to Detroit recently.

"My $87K Wagoneer sported no such tech, its average, adaptive-cruise system offering only forward detection for a long highway journey.

"Though when you get to your hotel, Wagoneer offers parallel and perpendicular self-park — one of my favorite features for big utes where the rear C-pillar is in another ZIP code. Modern applications — such as the system in say, the Ford Explorer I recently drove — are fully autonomous, meticulously braking and steering backwards into your designated parking space."

"Both Hurricane engine variants in the Grand Wagoneer L felt smooth and potent; the base engine is roughly on par with the Escalade's 6.2-liter V8. And with ample cabin insulation, the engines sounded almost eerily quiet.
"The Grand Wagoneer L handles its bulk fairly well when you do hit a corner. And you can tighten things up a bit with a sport mode and an adaptive suspension. But, weighing an extra 1500 lbs or so, you get little of the nimbleness you feel from the Ram 1500.
"At times, the Grand Wagoneer L can feel comically large. Jeep found a coffee shop with angled parking for our rest stop, which led to a bit of a traffic jam. After stopping to take pictures, I scrambled around for about 30 seconds trying to ascertain why the Grand Wagoneer L was alerting me something was open. It took me that long to realize the rear hatch was lifted. I couldn't sense it from all the way up front.
"We did not fill up our Wagoneer vehicles. But don't expect driving them to be cheap. They earn around 16-17 mpg combined. And you're probably going to be buying premium, which is recommended on the standard output Hurricane and mandatory on the 510 version."

"If you flatten the second- and third-row seats, the proverbial four-by-eight sheet of plywood slides in like a piece of dry toast. A nine-foot Orvis fly rod will rest flat when inserted diagonally. You could carry Delaware in this SUV, and, all kidding aside, the center console will swallow a basketball.
The facts:
• 44 cubic feet behind the third-row seats (17 cubic feet more than the SWB Grand Wagoneer)
• 43 inches of second-row legroom
• 131 cubic feet of cargo volume behind the first row
Who needs a Ram pickup?
There's a genuine car-enthusiast angle to all of this. (Cars were produced in America in the mid- to late 1900s, but you weren't born then.) It's Chrysler's all-new 'Hurricane' twin-turbo inline-six — not bent but straight, you've read that correctly — belting out 420 or 510 horsepower, your choice. This costly jewel-like revelation is a rev-happy 3.0-liter dervish that would stand us on our ears if it ever powered something as minuscule as, say, an automobile.
"This engine offers bits to make engineers weep: a water-to-air intercooler, twin oil pickups in the sump, and a compression ratio as high as 10.4:1. The turbos aren't sequential, instead serving three holes per, and the low-end torque is plentiful. In fact, how does this sound: 500 pound-feet from the high-output version, which ought to suffice for your 9000-pound horse trailer. Moreover, the glistening alloy block is less than 29 inches long and has been dyno-tortured almost flat on its side. Meaning it will fit in almost any vehicle. Except, at Chrysler, which? A grumpy old Charger? Nevertheless, for the second time in its storied career, the iron-block Hemi should be dropped at the curb.

"In our testing, the GWL (which gets the more powerful six) reached 60 mph in 4.7 seconds. If that's too leisurely, maybe lash the McIntosh stereo's 1375-watt amp to the eight-speed automatic. Voila, a new kind of hybrid.

"We should note that there isn't a dusty scintilla of Jeepishness in either of these luxo-leviathans. No Jeep this upscale has ever scuffed tread in blue-collar Toledo, Ohio, although it occurs to us that Mayor Kapszukiewicz might want to name a suburb after it."

"The new Wagoneer L and Grand Wagoneer L serve as an exercise in contradiction. I drove both versions extensively in city, highway, and off-road environments, and found them almost disturbingly 'car-like' in their steering and throttle response. Without turning your head and fixating on the vast, 3-row, 8-passenger capacity offered by these full-size SUVs, you simply forget how much vehicle is back there. Admittedly, with today's advanced suspension technology most modern large SUVs 'drive smaller' than they are, but the Wagoneer L and Grand Wagoneer L elevate this trait to a new dimension." 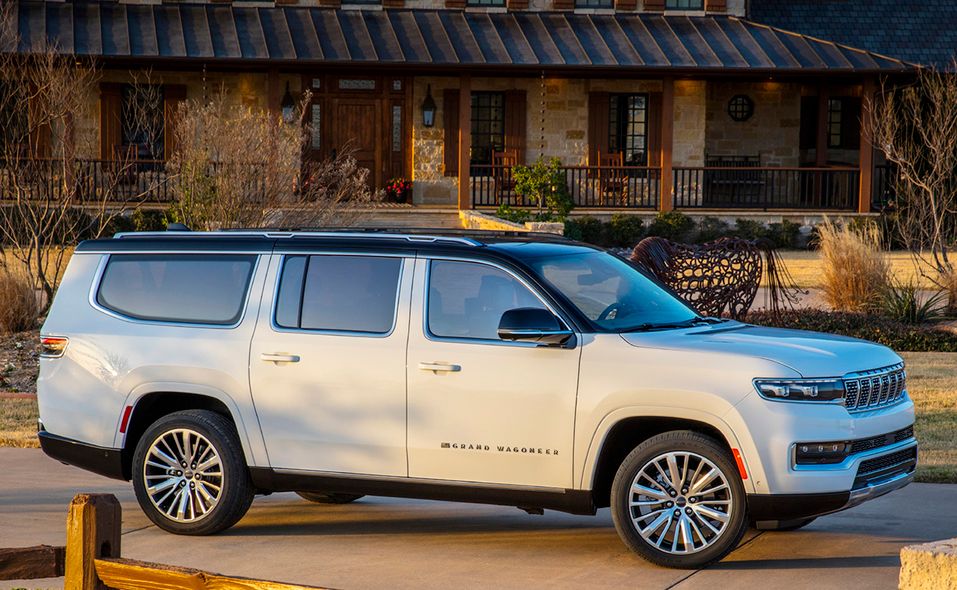 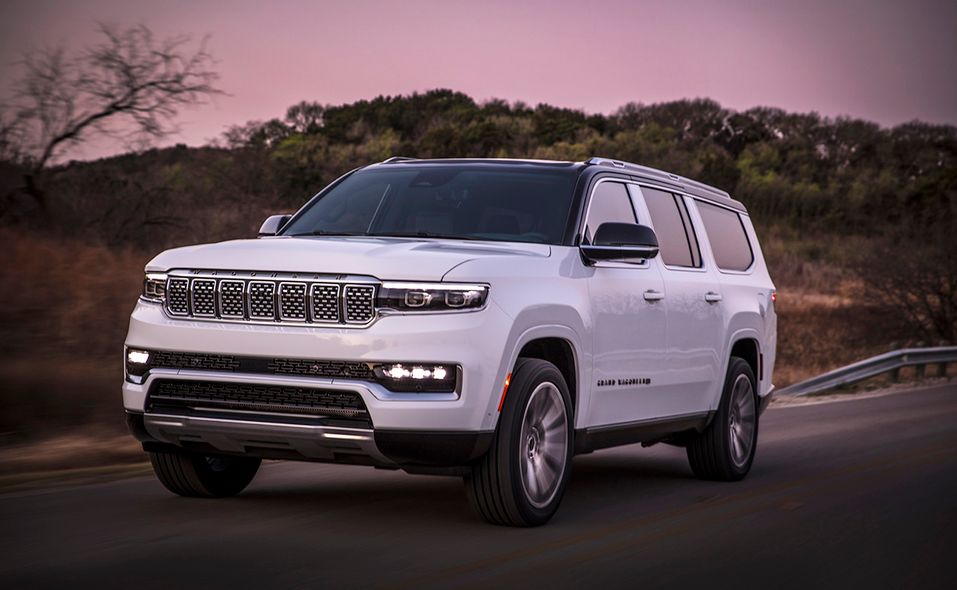 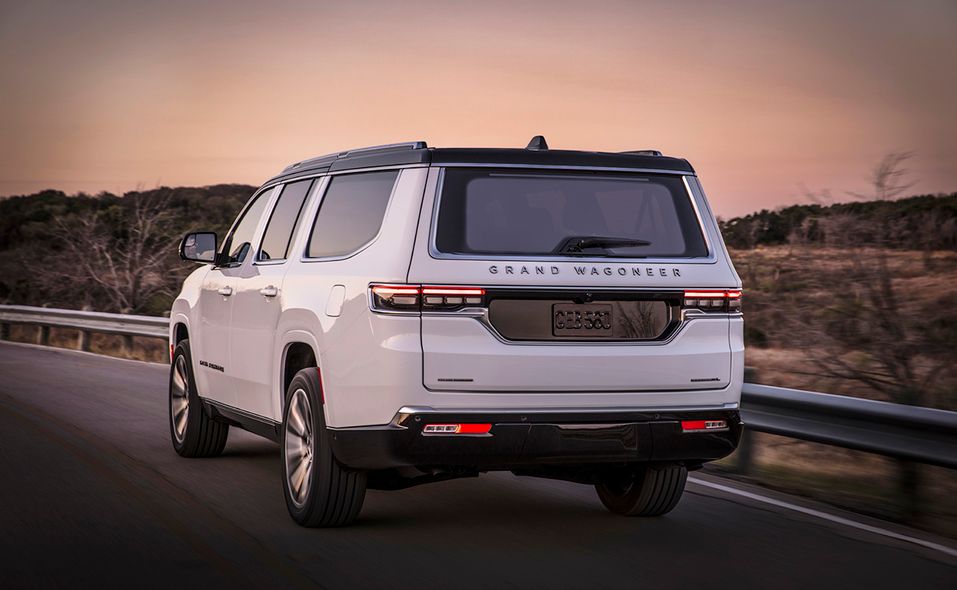 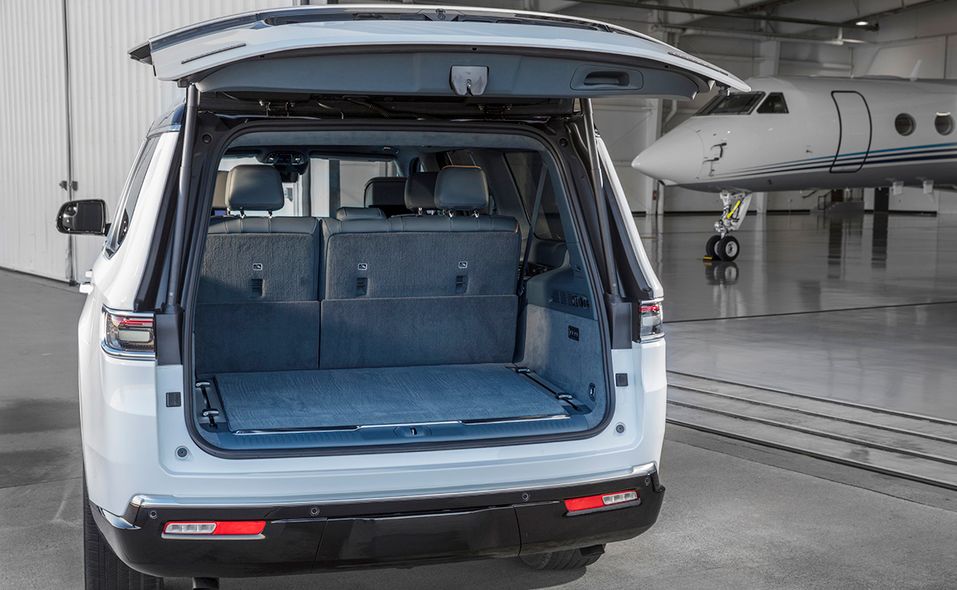 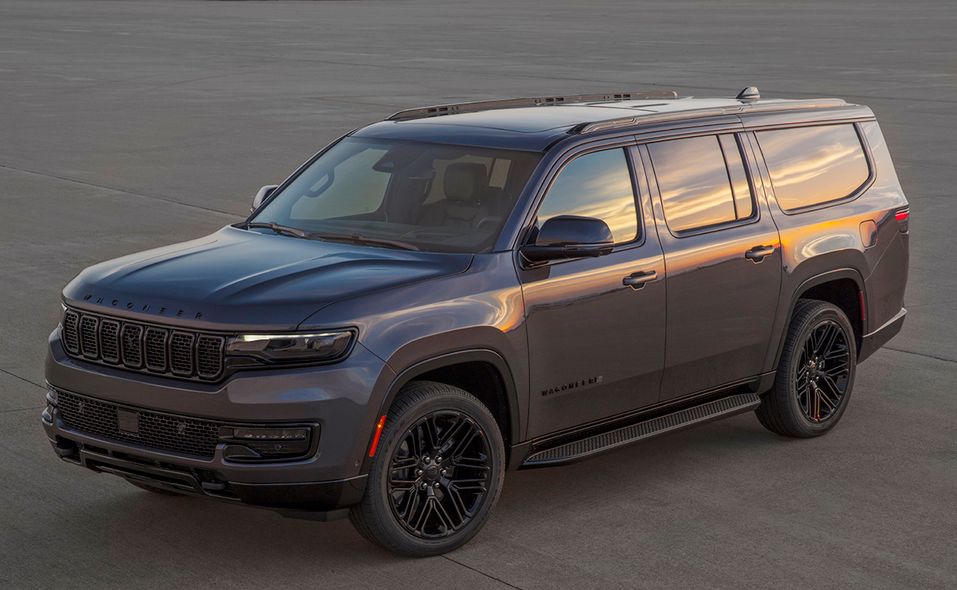 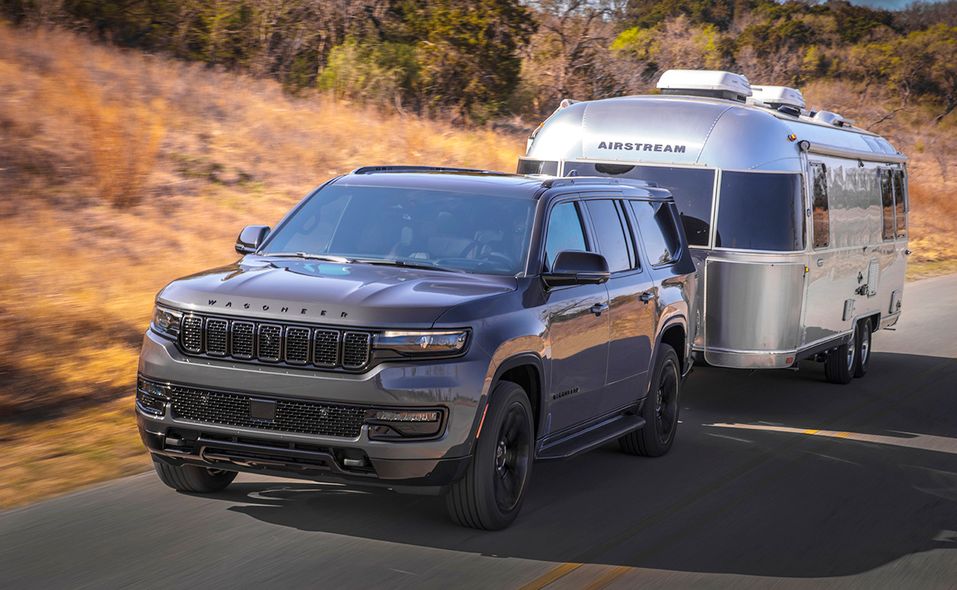