Sustainability will come in various forms for Stellantis

The stylish Ram Revolution is just one piece in the broader galaxy of Stellantis, which is methodically planning its moves to achieve net zero carbon emissions by 2038.

LAS VEGAS — The Ram 1500 Revolution battery-electric concept vehicle glided onto the stage as a shining star at CES last week. It previews a production version of the truck coming in 2024.

The stylish Revolution is just one piece in the broader galaxy of Stellantis, which is methodically planning its moves to achieve net zero carbon emissions by 2038. Other cogs in the pursuit of this goal include an electric aircraft Stellantis is planning to build with Archer Aviation and the electric Peugeot Inception concept, which also grabbed the spotlight at CES.

The vision goes further with eco-friendly commercial vehicles, including the first electric Ram ProMaster arriving this year that will handle loads for Amazon, plus hydrogen-powered Ram Heavy Duty pickups coming later this decade that build on the progress Stellantis has seen with fuel cell vans in Europe.

Tavares lays out bold tech vision for Stellantis
Ram EV pickup concept will follow you like a puppy and just about charge itself
Stellantis creates data services business, called Mobilisights

The Ram 1500 Revolution BEV concept includes capabilities that would be new to the full-size pickup market.
Shadow mode: The truck can safely follow its walking owner with no one behind the wheel.
Ram charger: When the pickup enters its home garage, a robot brings an inductive charger underneath to automatically reload the battery.
Extended pass-through: Fold-down seats and passenger-side access to the frunk allow hauling of objects as long as 18 feet with the tailgate closed.
Third-row seats: The concept uses its extra interior space to add removable jump seats in a third row.

Stellantis CEO Carlos Tavares said the company has "the right focus and resources to support, shape and scale the best breakthroughs in all facets of sustainable mobility."

Tavares laid out his goals in a lofty keynote address at CES that sought to explain the automaker's place in the world.

"Everything Stellantis does this day forward sets the table for how we'll get our carbon neutrality commitment in just 15 years," Tavares said. "Leading the way the world moves with clean, safe and affordable options is the only path to a sustainable future. For all of us, Ram is a wonderful example among the many stars in our Stellantis galaxy." 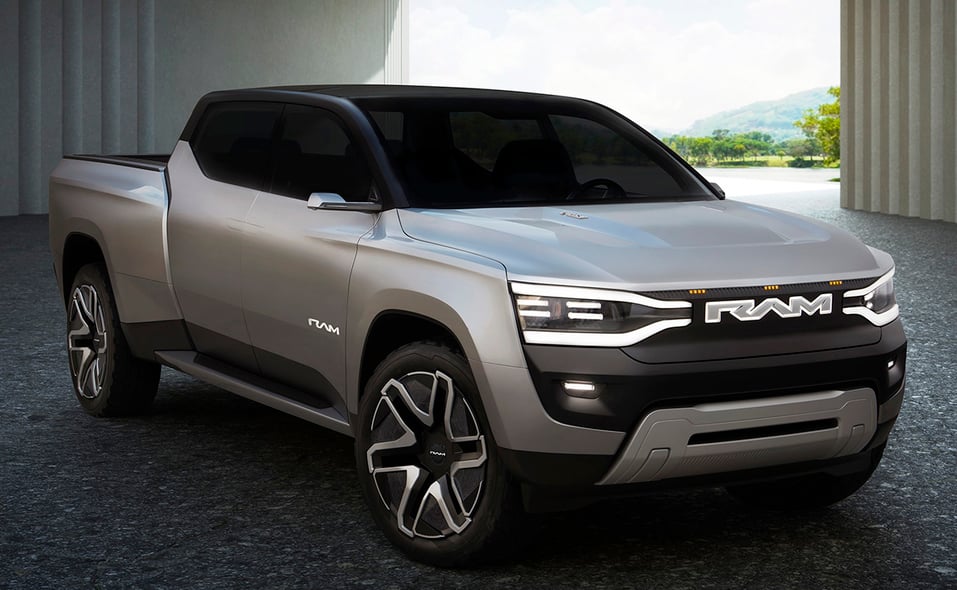 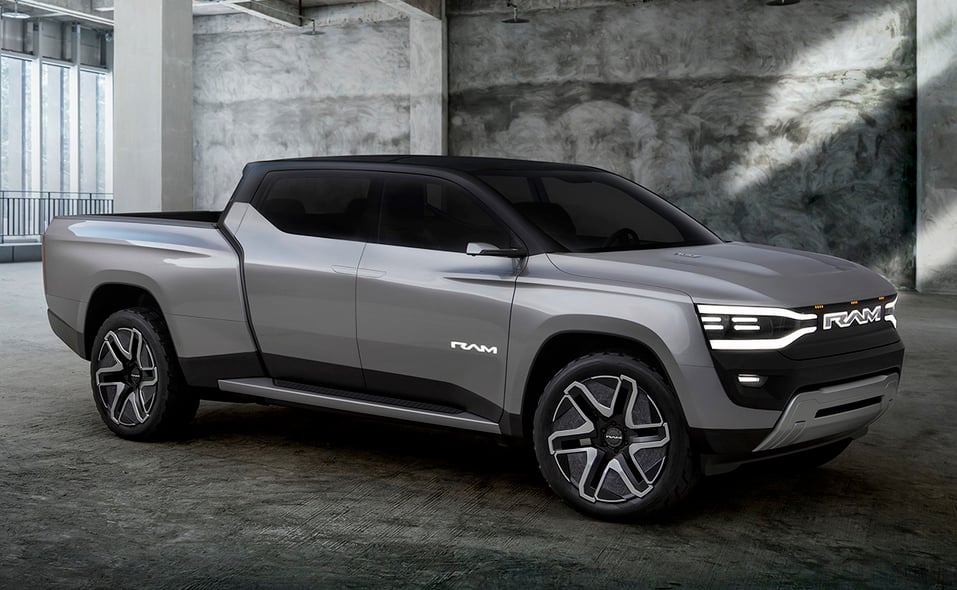 Stellantis design chief Ralph Gilles: Ram's design team came up with an aesthetic for the 1500 Revolution BEV Concept that gives off toughness, yet is still sexy. 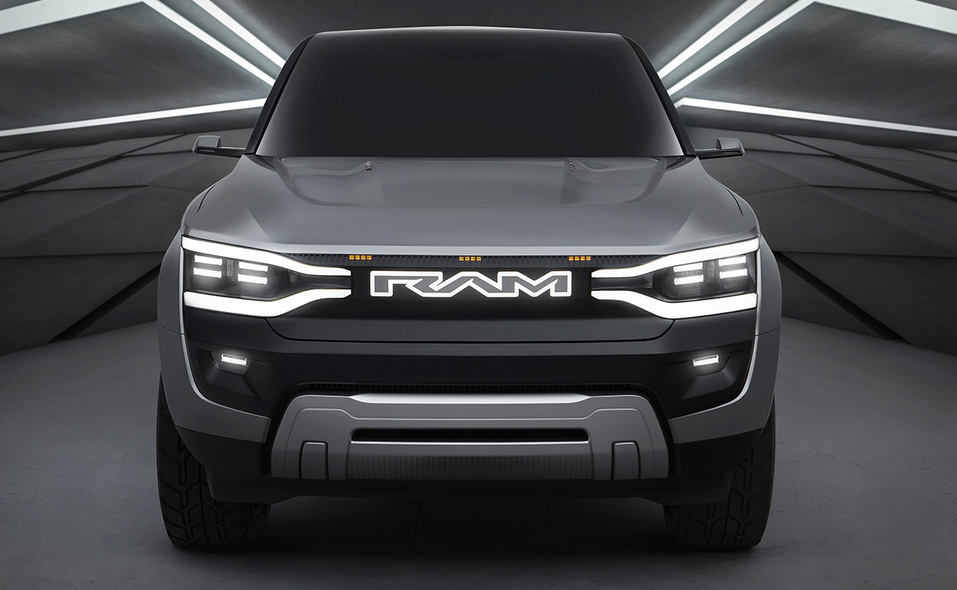 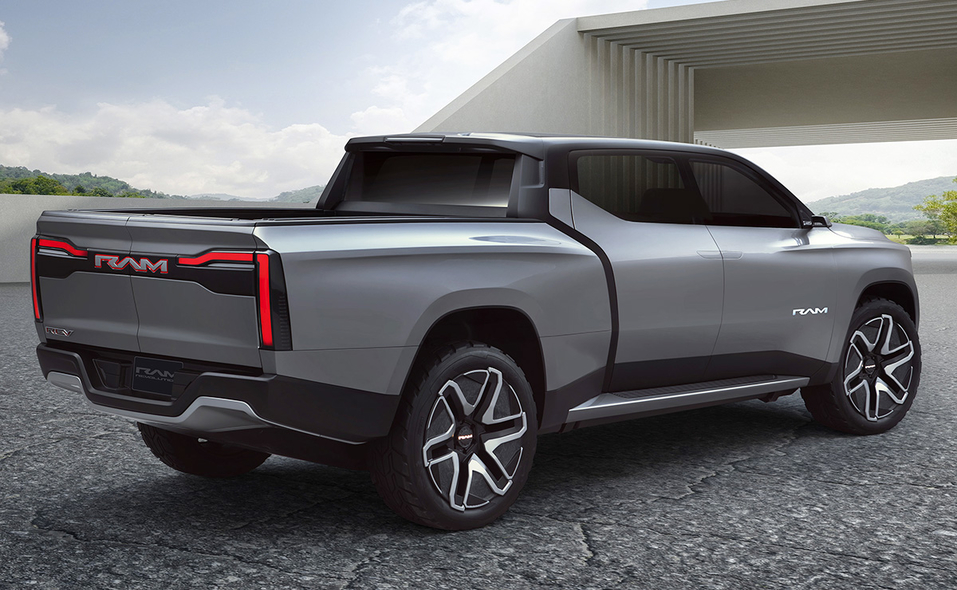 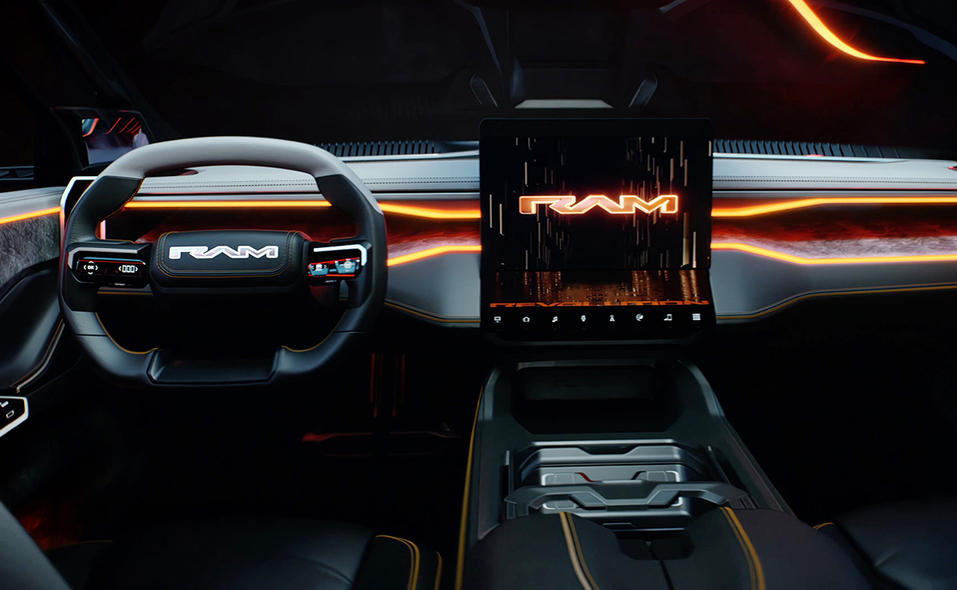 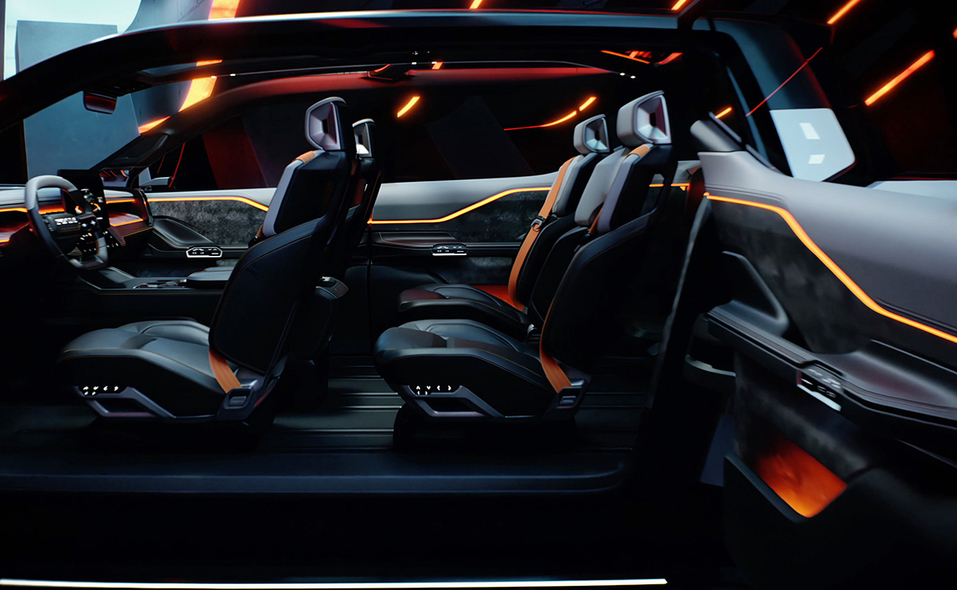 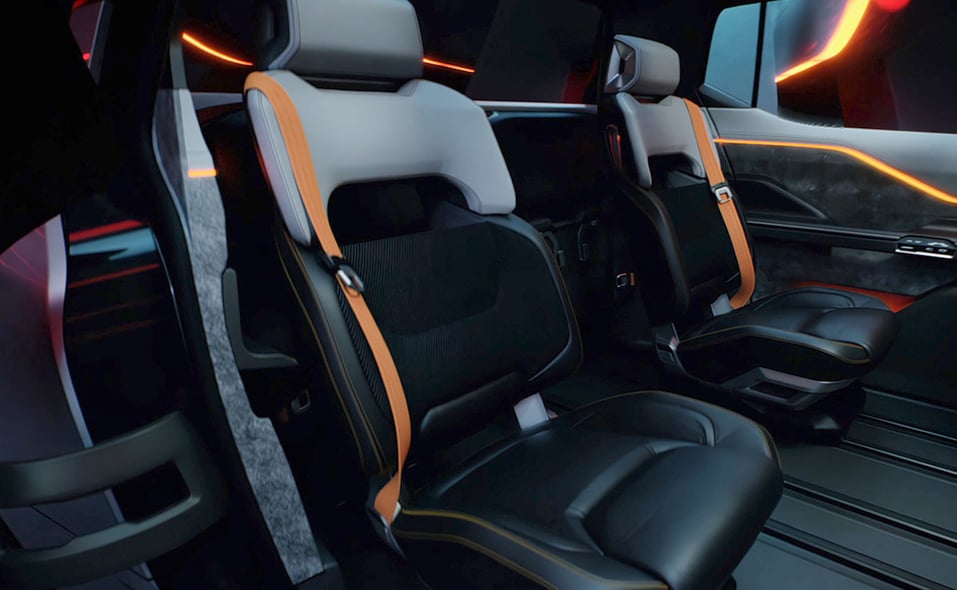 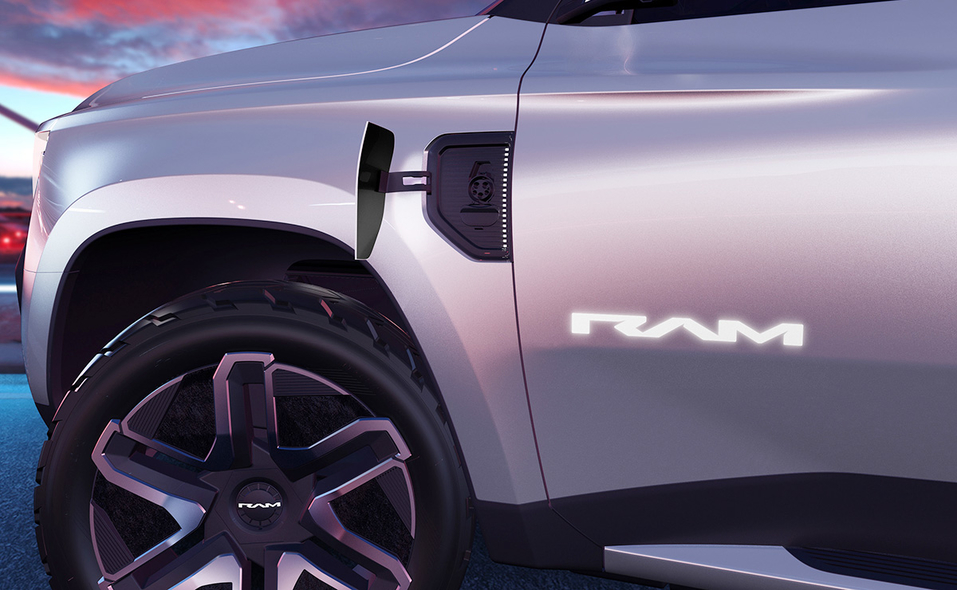 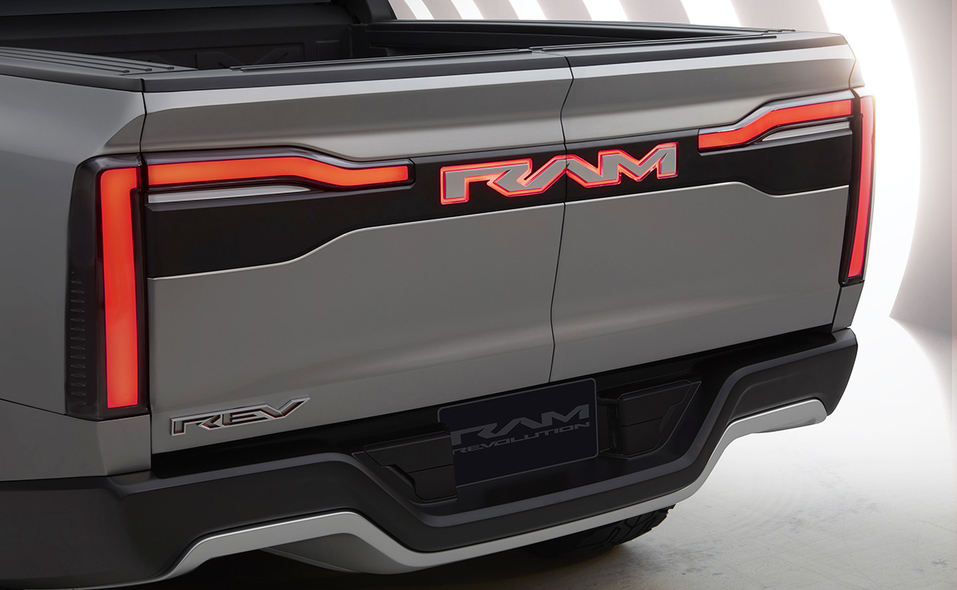 Ram may not be the automaker's only star, but its electric truck was the biggest for Stellantis at CES last week. The Revolution concept commanded the stage with an aesthetic that designers consider both brutish and beautiful.

Ram CEO Mike Koval, who introduced the 1500 Revolution, said the concept's design sets the tone for the next generation of Ram products.

Flush with technology, it includes an artificial intelligence-powered personal assistant, a "shadow mode" where the truck follows the driver using sensors and cameras and smart home control. It has an intelligent storage app that Ram said can help users measure objects to determine whether they can be transported with the vehicle.

Koval said a production-ready version will be revealed within a couple of months, with plans to bring the electric truck to market in 2024.

Sam Fiorani, vice president of global vehicle forecasting at AutoForecast Solutions, said Ram's electric pickup could be worth the wait if it comes close to the concept.

"Taking the best ideas on the market and improving them, Ram gives a glimpse of how owners who actually use their trucks can find new ways to use them to their fullest, inside and out," he said.

Stellantis is working with solid-state battery company Factorial Energy in a move that could take Ram's future — and the capabilities of its other brands — to the next level.

The automaker is working toward introducing solid-state batteries slated to deliver safety, cost, weight and performance improvements over lithium ion batteries by 2026. Stellantis invested in Factorial Energy and signed a joint development agreement to advance the technology.

"With Factorial, we are in development of proprietary technology that uses less cobalt," Tavares said. "The solid-state battery may deliver up to 30 percent higher energy density compared to conventional lithium technology, which will enable an even longer driving range. We are already working on the next generation that will push this to 50 percent, more or less."

Koval said the increased power density of the solid-state batteries in the Revolution would allow Ram to dedicate more payload capacity to a customer's needs rather than the vehicle's.

"Because, after all, nobody wants to brag about how much battery weight their truck can tow," he said.

Tavares said Stellantis is all about "freedom of mobility," a freedom he believes is at risk. The automaker's relationship with Archer Aviation, which is looking to transport people in its electric aircraft for the price they'd pay for a Lyft or Uber trip, aligns with this outlook, he said.

"Mobility may be expressed in different ways," Tavares told reporters last week at a roundtable with Archer CEO Adam Goldstein.

"It's not only about cars: [It] may be about aircrafts, [it] may be about something else," he said. "Anything that relates to giving breathing space to the citizens, giving them the sense that they are free to move in a safe, cost-competitive way from A to B at their leisure when they decide to do it is the reason why we exist. That's why we found this partnership such a natural one."