The 2023 Lexus RZ 450e crossover propels Toyota's luxury brand into the all-electric age as a driver's EV that focuses on responsive driving dynamics as well as everyday utility. 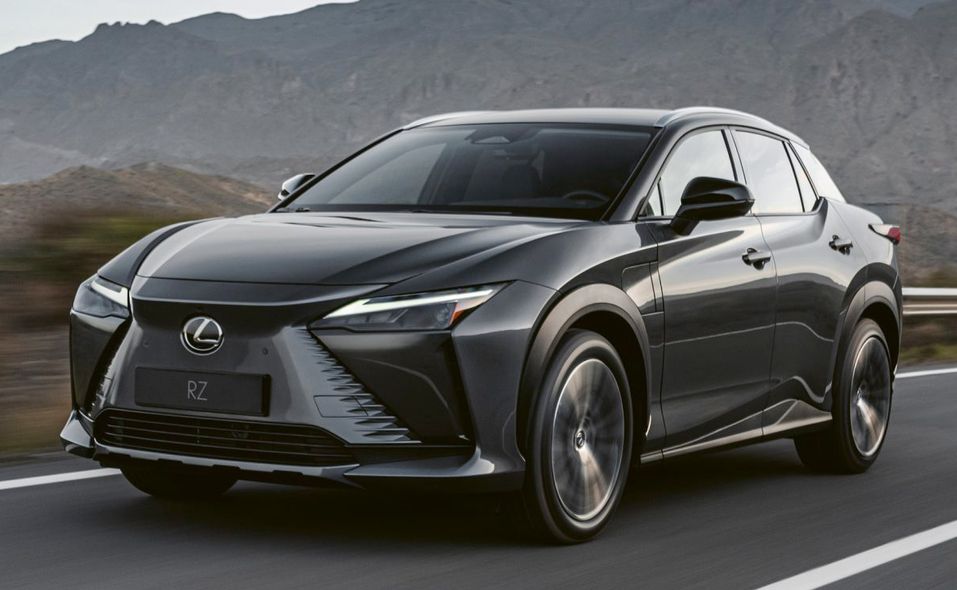 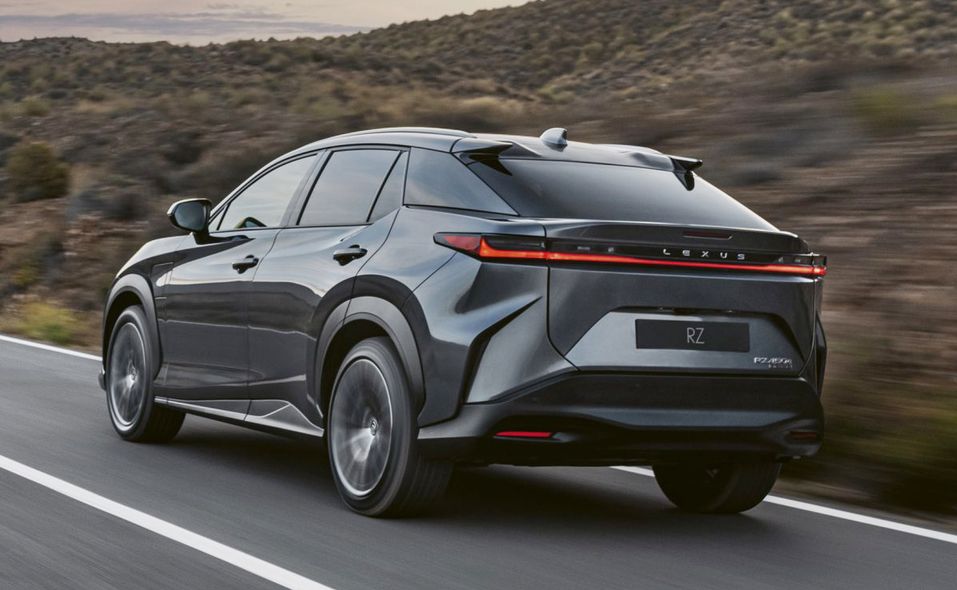 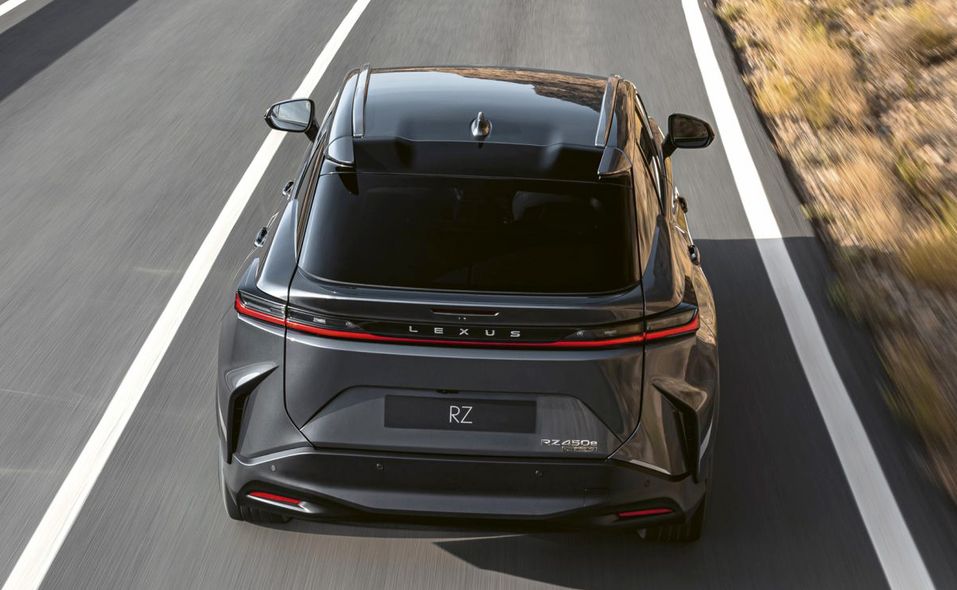 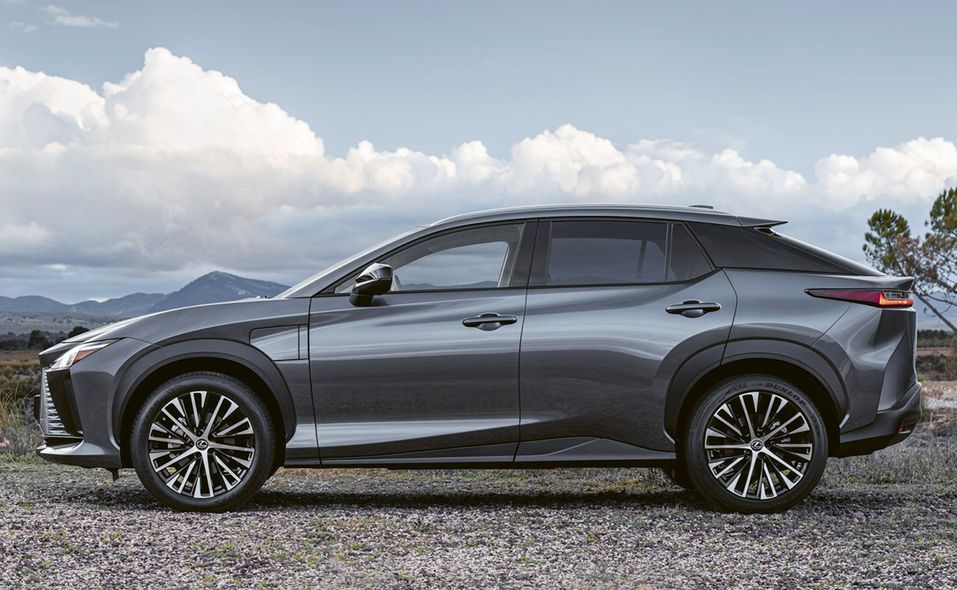 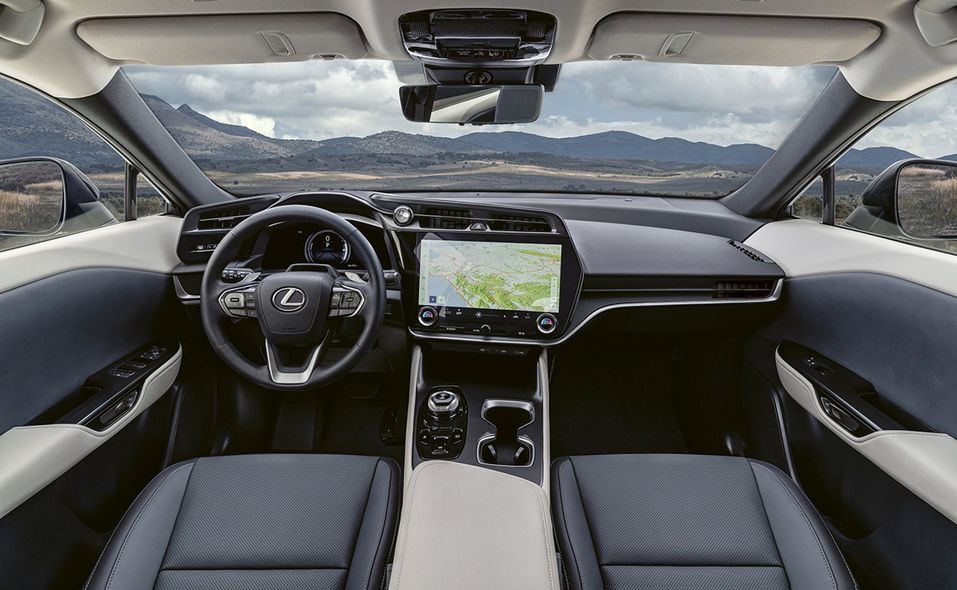 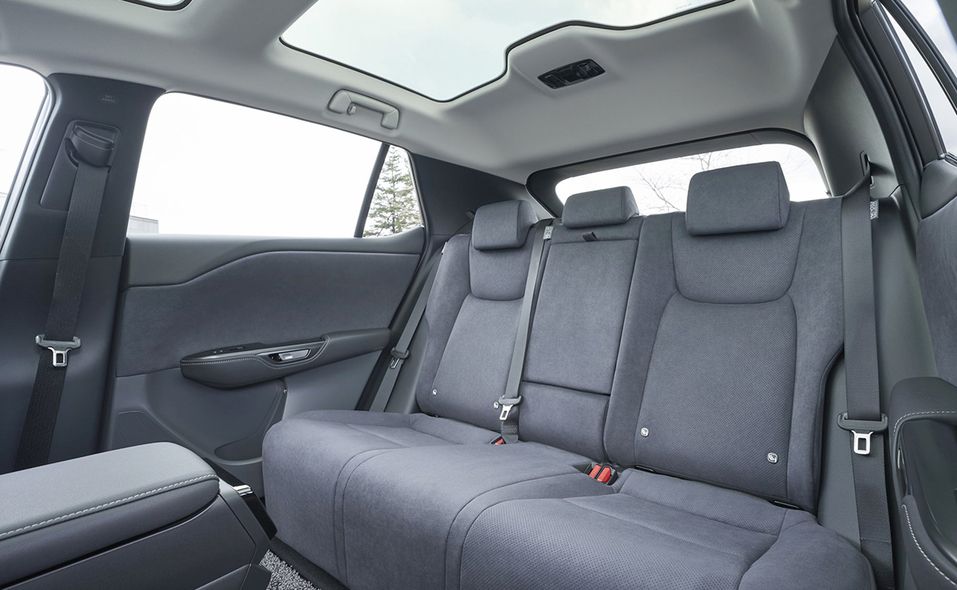 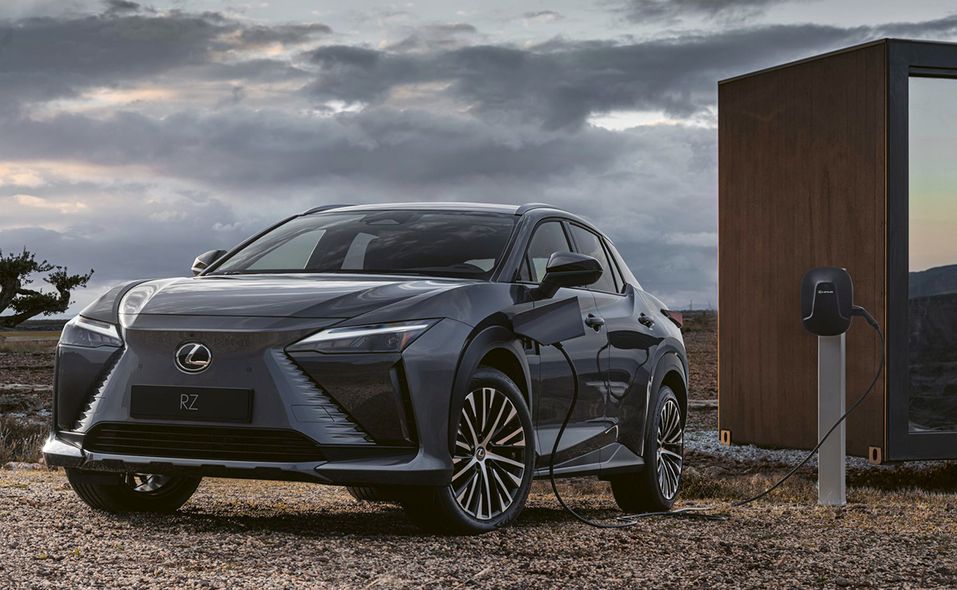 TOKYO — The new RZ crossover propels Lexus into the all-electric age with a sporty family-friendly rocket that combines acceleration and responsive driving dynamics with everyday utility.

The dynamically styled midsize offering, unveiled online Wednesday, debuts a new design look for Toyota Motor Corp.'s premium brand and foreshadows a wave of Lexus electric vehicles that are on the way.

Among the glimpses of tomorrow is a new yoke-style steering wheel that connects to Lexus' first steer-by-wire system — although the system's introduction to the U.S. is still under consideration.

"Quick acceleration, precise brake feel and confident handling will all be Lexus hallmarks."

The 2023 RZ 450e goes on sale in October, starting in China and Europe, and then rolls into the U.S. and Japan.

But the RZ stokes more emotion compared with both the RX and the mass-market bZ4X.

For starters, the Lexus EV targets a 0-to-62-mph time of 5.4 seconds, while 0-to-60 is expected to clock in at 5.2 seconds. That's more than a second faster than the all-wheel-drive version of the bZ4X and not too far off the 3.7 seconds clocked by the Lexus LFA sports car.

The RZ handily beats the gasoline and hybrid versions of the RX.

The RZ's extra oomph comes courtesy of a dual-motor setup that pairs two new e-axles developed by Toyota Group supplier Aisin Corp. — a 150-kilowatt motor in the front and an 80-kilowatt counterpart in the back. The resulting output of 230 kilowatts, or 308 hp, far outstrips the maximum power configuration of 214 hp in the two-motor awd bZ4X.

By contrast, the Lexus UX 300e, an electric variant of the standard gasoline or hybrid version of the compact crossover, gets only a single 150-kilowatt motor.

* Based on WLTP testing regimen, not EPA rating.

One trade-off comes in battery range.

The RZ is expected to deliver around 248 miles on a full charge, Lexus said. That figure is calculated under the Worldwide Harmonized Light Vehicles Test Procedure, which is considered more generous than U.S. EPA calculations. EPA figures for the RZ are expected to be around 225 miles.

For comparison, the bZ4X's front-wheel-drive version gets an EPA rating of 252 miles, while the awd variant of the bZ4X comes in around 228 miles under U.S. rules.

In the RZ, an all-wheel Direct4 drivetrain is the only layout offered.

The awd setup is different from the one in the bZ4X. The RZ uses a Lexus-unique logic to control the distribution of motor torque between the front and rear wheels, depending on road-grip conditions. By balancing this front-rear torque split, the RZ delivers more direct, confident handling. And it damps vehicle pitch for flatter, more linear acceleration and braking.

The smoother feel is key to the driving dynamic Lexus is trying to cultivate to set its vehicles apart from the rest of the pack in the electrification age. It's called the Lexus Driving Signature.

Lexus fine-tuned the RZ's driving dynamics on its new "mini-Nürburgring" proving ground in the mountains outside Toyota City, Japan. Lexus is moving its global brand headquarters to the Toyota Technical Center Shimoyama in 2024.

"Driveability is the most important thing for Lexus," said Takashi Watanabe, the former chief engineer of the Lexus LC sport coupe who now leads the brand's battery-electric program.

The RZ will be produced at the company's Motomachi assembly plant in Toyota City, on the same line as the bZ4X and a sibling EV from the same platform, the Subaru Solterra.

Whereas the bZ4X will get its batteries from both Chinese battery giant CATL and Japanese company Prime Planet Energy & Solutions, a joint venture between Toyota and Panasonic, the RZ will use only the Prime Planet packs. Lexus engineers said they deliver better performance but didn't elaborate how so.

The RZ plays a critical leadoff role in Lexus' goal of transforming itself into an electric-only brand in Europe, the U.S. and China by 2030, when it expects to sell 1 million EVs a year. By 2035, the brand aims to be ready to sell only full-electric vehicles worldwide.

The push makes Lexus the vanguard of electrification within Toyota Motor, as the Toyota brand continues working with internal combustion, hybrids and hydrogen fuel cells.

But Lexus has a long way to go to be completely gasoline-free. Its global sales of full EVs — relying solely on the UX 300e — amounted to just 5,800 last year. Sales of the new RZ are expected to be only about 33,000, at least at first, with China likely to be its biggest market, accounting for sales of 1,500 a month.

Lexus foresees monthly sales of around 439 vehicles in North America and 584 in Europe, where regulators are pushing more aggressive EV targets.

The RZ kicks off a new generation of products at the luxury brand.

It first previewed the new direction in December, when Toyota President Akio Toyoda pulled the wraps off the RZ prototype and three other full-size mock-ups. Separate teaser photos have shown a convertible coupe and two wagon-style offerings evoking the Porsche Panamera.

Tomorrow's Lexus designs will feature an ultralow center of gravity and other performance-enhancing tweaks, such as sheet metal that boosts downforce and increases aerodynamics.

The embodiment of that new Lexus look is the BEV Sport, a piece of eye candy that is inspired by the LFA, the $375,000 Lexus super sports car that was discontinued in 2012 after a production run of just 500.

The RZ shows the way with its filled-in grille, which improves aerodynamics. Designers dropped the term "spindle grille" in favor of "spindle body," which they say conveys its 3D form and new EV body proportions. In the RZ, that includes a ducktail-shaped rear for slicker airflow.

When viewed from certain angles, the RZ's C-pillar almost disappears from sight as the back end pinches inward, creating the illusion of a sedan silhouette with a rear deck.

Two hornlike rooftop spoilers protrude from the rear corners. They have two jobs. The first is to break the coupelike contour and present a more squared-off roofline. The second is to suppress crosswind force and improve vehicle stability.

Inside, the RZ sticks to a driver-focused cockpit rather than adopting the minimalistic horizontal digital splay that is currently in vogue among EV designers.

There are still plenty of buttons, and the dashboard display is similar to that used the NX 450h+ plug-in hybrid, although RV designers moved the air vents above the screen. The center armrest console cocoons the driver.

Lexus calls the layout a Tazuna Concept, evoking the Japanese term tazuna, for the reins that a rider uses to control a horse. It is part of Lexus' gambit to create a more direct link between driver and machine for a feeling of intuitive control.

Even though the RZ will be the first Lexus to get drive-by-wire in a yoke-shaped steering wheel, the base model will stick to a traditional doughnut-shaped wheel.

The RZ will also offer a panoramic roof that stretches over the heads of the rear-seat passengers, who can luxuriate with extended legroom thanks to the RZ's long wheelbase.

Meanwhile, over-the-air updates will keep the vehicle's software seamlessly up to date. Lexus also replaced the mechanical door latch system with an electronic "e-latch" for more effortless entry. And a smartphone-compatible digital key can be shared with friends.

Finally, the vehicle contains the latest version of Lexus Safety System+, the brand's suite of safety and driver-assist technologies. It will also get Lexus' first adoption of a traffic-jam assist feature.

About the only thing the RZ won't have is a passenger-side glove box. Planners ditched this in order to adopt front-seat radiant foot-and-leg heaters. Lexus says the setup warms passengers more directly without wasting energy to heat the whole cabin.