Dual electric motors expected to produce 563 hp and 775 pound-feet of torque, making it the most powerful F-150.

DETROIT — Facing pressure from new rivals trying to stake a claim in the burgeoning battery-electric pickup market, Ford Motor Co. designed the 2022 F-150 Lightning to do what its gasoline-powered counterpart has done for decades: outwork — and outsell — all competitors.

Ford is hoping that a bold starting price of $39,974 before shipping — about $10,000 less than what the average shopper pays for a gasoline F-150 truck these days ($50,600 in April) — coupled with new features not possible on the current model will help win over EV skeptics and expand the pool of buyers who have made the F-150 the nation's bestselling vehicle.

It will be assembled at the Rouge Electric Vehicle Center in Dearborn, Mich., with sales scheduled to begin next spring.

Ford said the EV can outrun a Raptor with a targeted 0 to 60 mph time in the mid-4-second range, and its dual electric motors are expected to produce 563 hp and 775 pound-feet of torque, making it more powerful than any F-150 before it, including the V-8-powered variants that previously bore the Lightning badge.

"If we want to get customers into BEVs, we have to show them better," said Darren Palmer, Ford's general manager of battery-electric vehicles. "When it can do more, it gives them a reason for buying."

There are two battery options: a standard-range that is expected to get 230 miles to a charge, and an extended-range that's set to get 300 miles.

The Lightning will come in four trims, all of which will be available at the start of production. After the base model, the XLT starts at $52,974, and the high-end Platinum starts at around $90,000. The automaker declined to provide shipping charges or pricing for the Lariat trim, which falls between the XLT and Platinum. Ford charges $1,695 to ship and deliver the gasoline F-150, according to its website.

The sub-$40,000 starting price places the Lightning well below the $79,995 starting price tag on the upcoming GMC Hummer electric pickup and the $67,500 starting price of the Rivian R1T, which goes into production later this year. The F-150 Lightning is priced nearly identical to the Tesla Cybertruck, which starts at $39,900 before shipping, although that vehicle is likely to be classified as a medium-duty more on par with Ford's F-250.

"We're not here to make an electric truck for the few — Ford is committed to building one that solves real problems for real people," Kumar Galhotra, Ford president, Americas and International Markets Group, said in a statement.

FORD
The interior of the F-150 Lightning.

Ford said it was able to price the Lightning so aggressively because of scale and by sharing some common parts with its existing full-size pickups. For example, while the Lightning has a specially designed steel frame to protect the battery, Ford is sourcing it from the same supplier that builds the steel frame for the gasoline F-150.

"We didn't need to do a completely ground-up vehicle," Palmer said. "We have an aluminum-bodied vehicle that's already the head of its market. We didn't need to retool the whole thing. As a result, we can offer a vehicle at that price with this whole lineup and make money on it."

The exterior of the F-150 Lightning isn't a radical departure from the styling of the gasoline-powered model, although there are a few key differences.

The Lightning features a light bar that runs horizontally across the front of the vehicle and connects the tops of both headlights, with a similar taillight design. The grille area is closed off but largely resembles the size, shape and color of the grilles on gasoline-powered trucks.

The Lightning also has the same cab and bed dimensions as the gasoline F-150 to accommodate thousands of accessories already offered. In total, the Lightning's curb weight is between 1,000 and 1,500 pounds heavier than the gasoline-powered F-150.

"Our customers told us they want something modern and advanced, but did not want their truck to look like a doorstop or a spaceship," said Jasen Turnbull, marketing manager for the Lightning. "They wanted something distinct but not different."

The strategy stands in stark contrast to that of the Cybertruck, which Tesla CEO Elon Musk said was designed as "a futuristic battle tank."

Among the most prominent new features offered on the F-150 Lightning is a spacious front storage area, which Ford calls a mega power frunk. Unlike similar features on other EVs such as the Mustang Mach-E, which open from the hood, the Lightning's frunk opens from the bottom of the grille area, making it easier to lift heavy items in and out.

It's lockable, can carry up to 400 pounds and comes with four 110-volt power outlets and two USB charging outlets. There are multiple ways to divide the space and a drain at the bottom to help with cleaning.

Ford says the frunk has 2.4 kilowatts of power — enough to run power tools, TVs, laptops, speakers, slow cookers and more without tapping the power offered in the bed.

Ford says the frunk on the F-150 Lightning can carry up to 400 pounds.

Those frunk outlets give the Lightning more total on-board power than the current gasoline-powered truck, which introduced the on-board generator feature with the latest redesign. In total, the F-150 Lightning offers customers up to 9.6 kW of power, up from 7.2 kW offered on the gasoline model.

The automaker will offer what it calls Ford Intelligent Backup Power, whereby the truck automatically starts to power a home if it is plugged in and a power outage occurs. To enable that, a customer must buy Ford's optional 80-amp wall box and home management system. The automaker is partnering with solar company Sunrun to install the boxes but did not provide pricing.

The 80-amp wall box is different from the Ford-branded wall box offered with the Mustang Mach-E for which Ford issued a stop-sale earlier this year.

Ford says the 80-amp wall box will add an average range of 30 miles per charging hour, fully charging an extended-range F-150 Lightning from 15 to 100 percent in about eight hours.

A 150-kW DC fast charger will give an extended-range Lightning up to 54 miles of range in 10 minutes and charge from 15 to 80 percent in about 41 minutes. Ford says its North American charging network includes more than 63,000 plugs.

The Lightning's interior largely resembles that of the gasoline-powered truck, with features such as a fully reclining front seat, folding gear shifter and flat work surface. But the Lightning gets the same 15.5-inch center touch screen offered on the Mustang Mach-E.

It will also be offered with Ford's hands-free BlueCruise driver-assist technology, which is set to debut later this year on the Mach-E and gasoline-powered F-150. And it will have over-the-air update capability, which Ford began offering this year.

The electric truck also will have on-board scales that can give drivers real-time payload information.

The vehicle is powered by a lithium ion battery that weighs roughly 1,800 pounds and is enclosed in a steel frame that's different from that on the current F-150. The entire length of the Lightning's underbody is capped by metal skid plates to protect the battery and both electric motors.

Ford began taking $100 refundable deposits for the F-150 Lightning late Wednesday after the reveal. The automaker said there will be separate sign-ups for retail and commercial customers.

The vehicle has already received its first review — from President Joe Biden, who drove a prototype Lightning on Ford's Dearborn test track Tuesday as part of his visit to the automaker's Rouge Electric Vehicle Center.

"This sucker's quick," he told members of the media before punching the accelerator and speeding off. 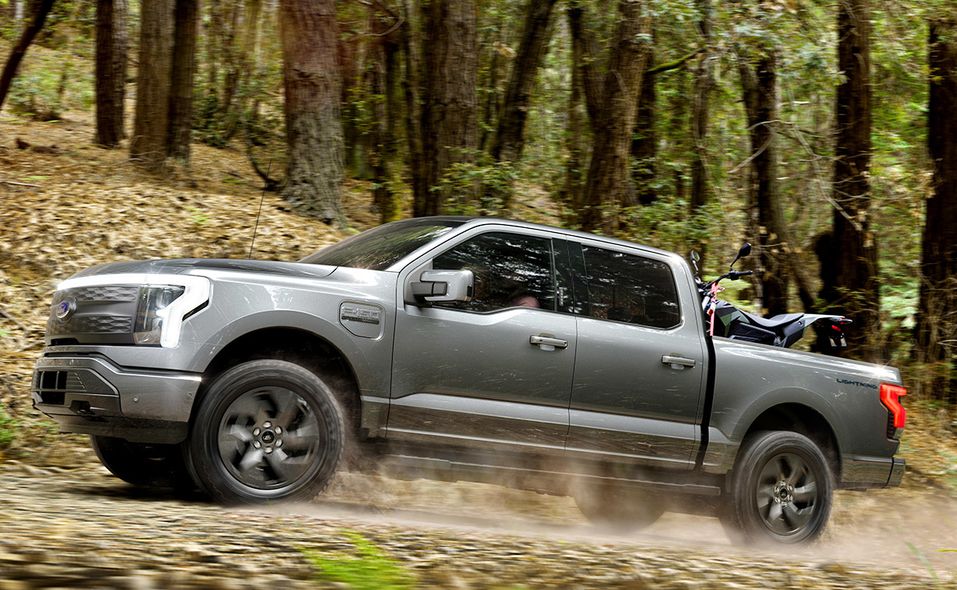 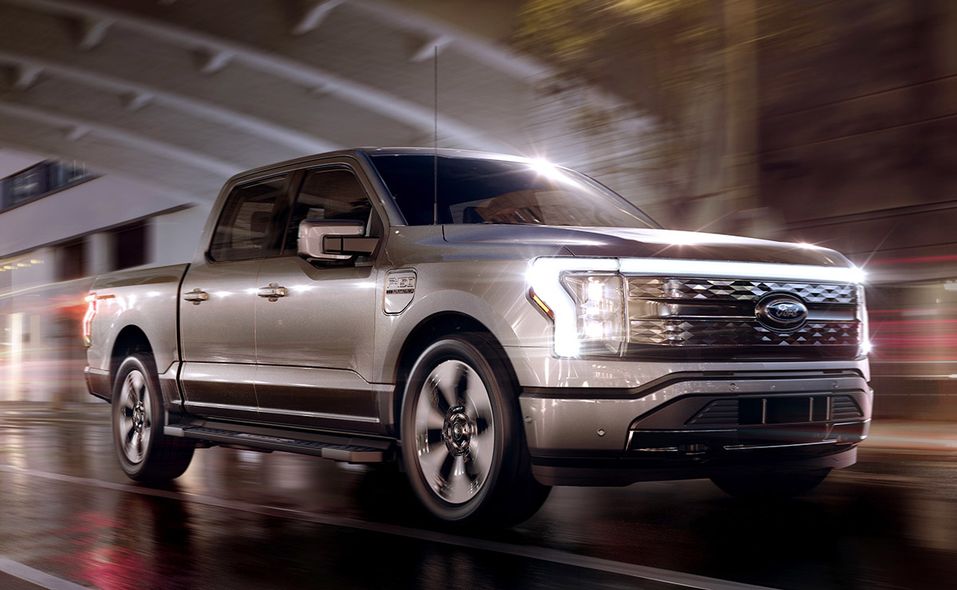 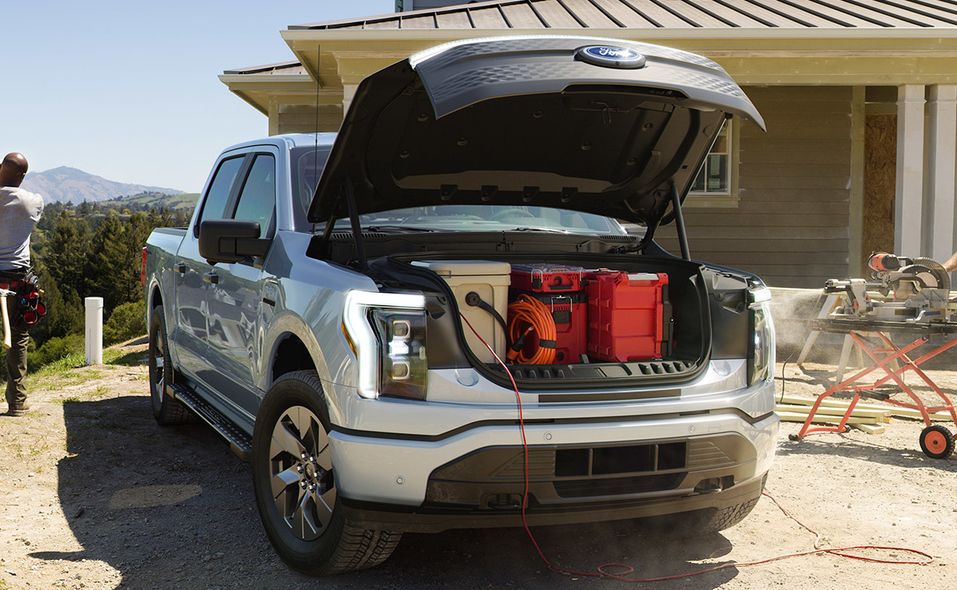 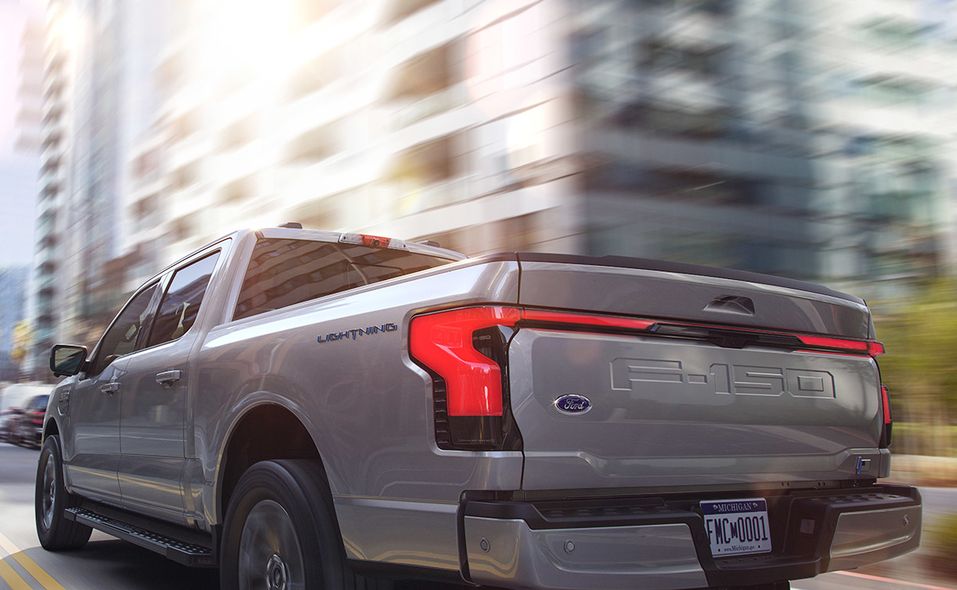 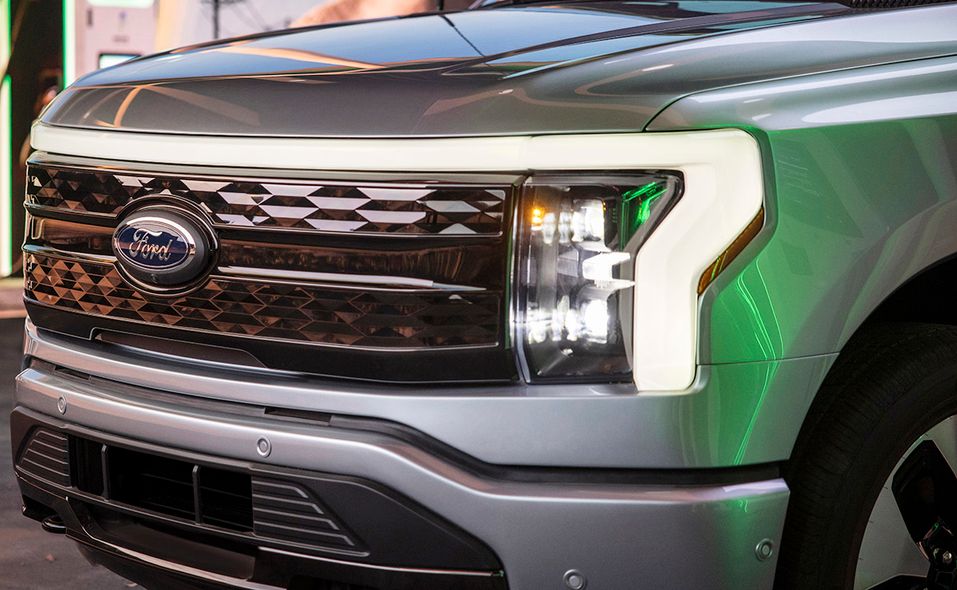 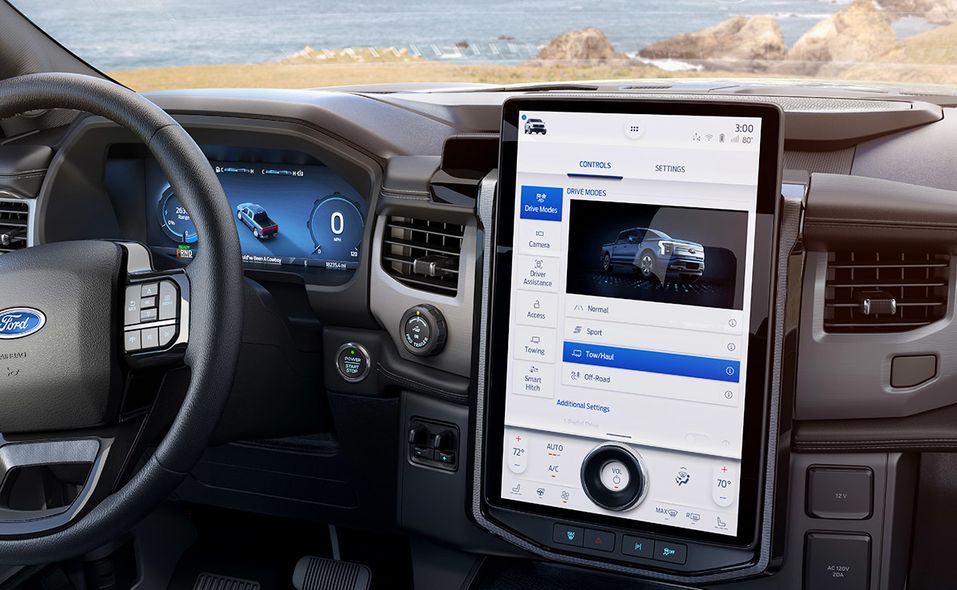 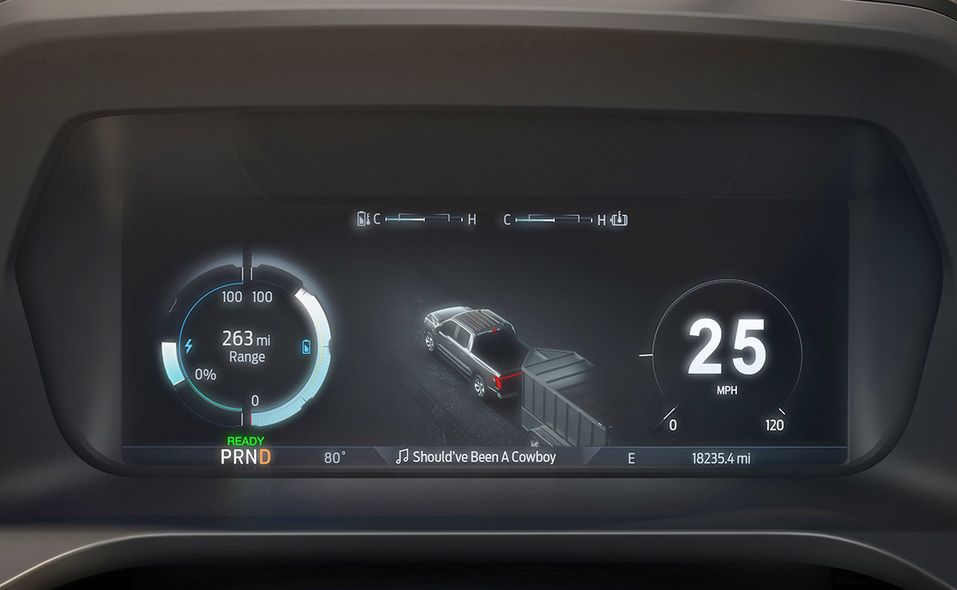 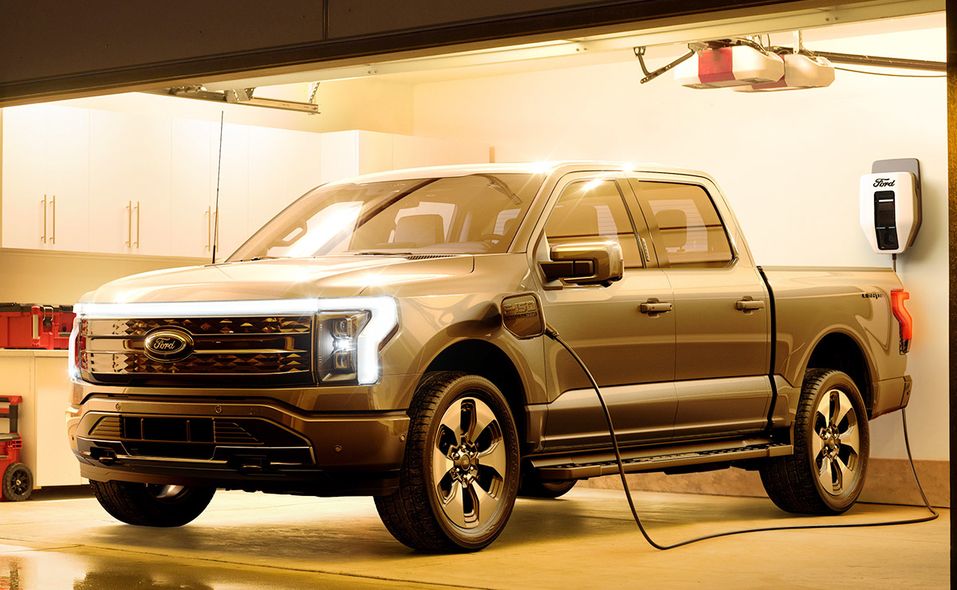 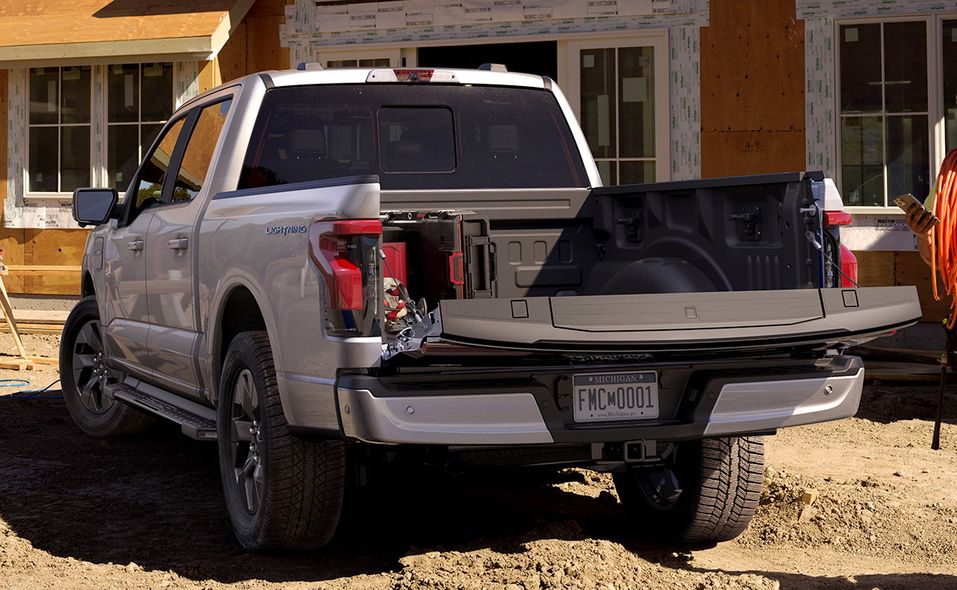 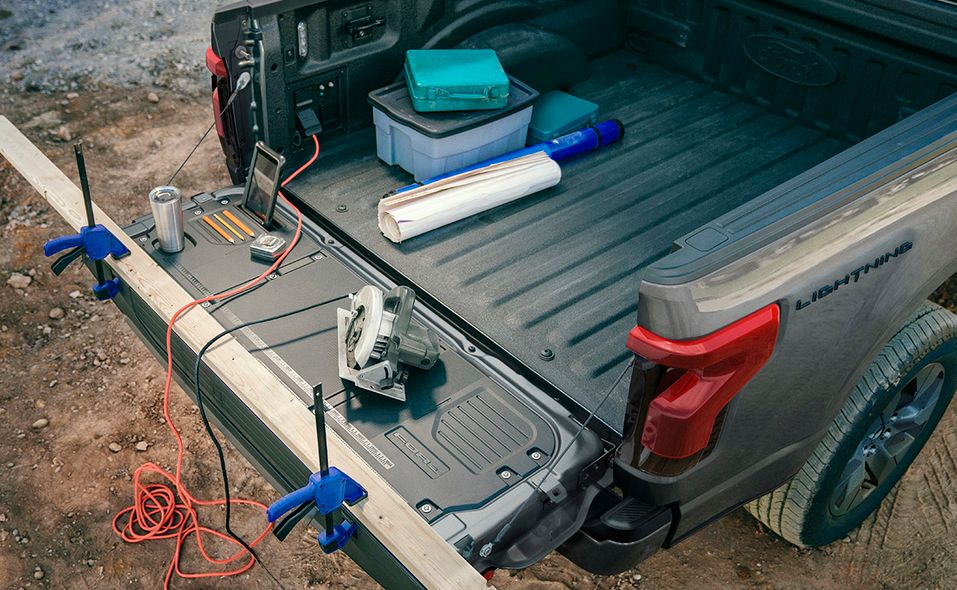 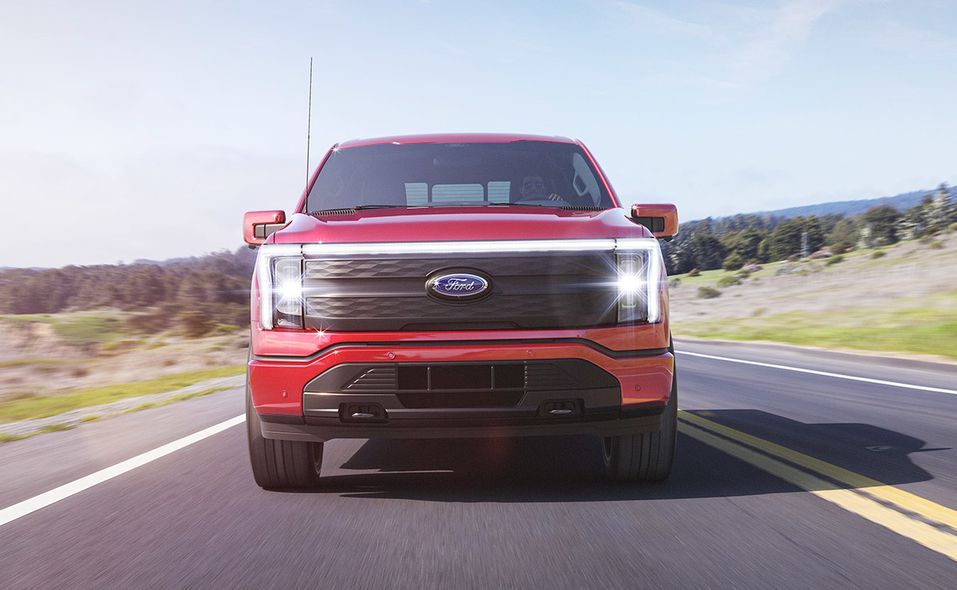 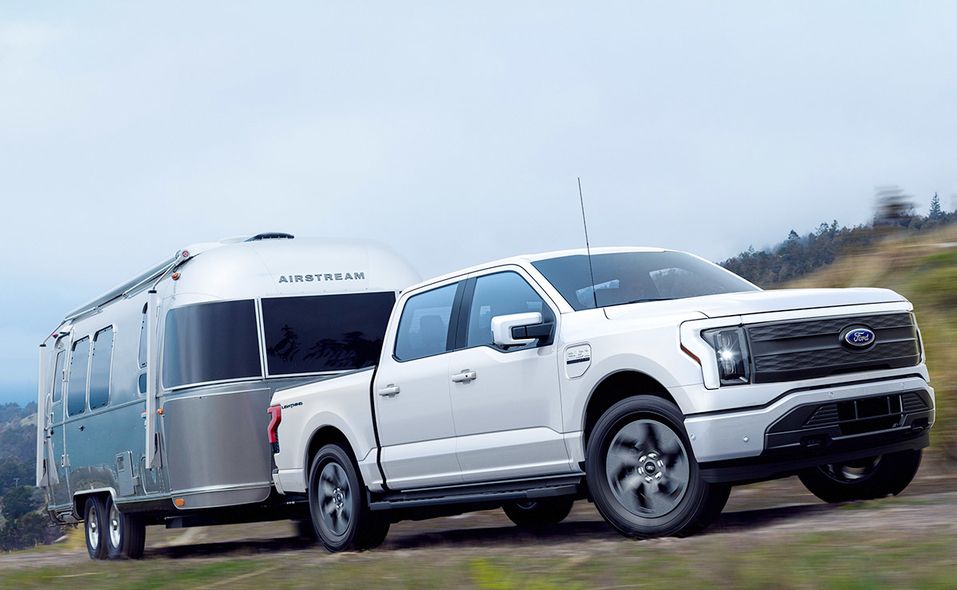