The Bentayga's grille has been redesigned so it sits higher to give the SUV a more dominating look.

LONDON -- Bentley has spent big to upgrade its top-selling model, the Bentayga SUV, in a bid to hold off new competition such as the Aston Martin DBX.

The British ultraluxury automaker has redesigned the SUV to give it a higher market position, farther away from rivals, CEO Adrian Hallmark said in a news release Tuesday.

With the exception of the doors, all of the SUV’s exterior panels have been redesigned, with the most dramatic changes coming at the rear.

The current model’s conventional tailgate has been replaced with one that stretches around the side of the vehicle. The change eliminates the shut lines seen from the rear and also allows the adoption of elliptical lights similar to those on Bentley’s Continental GT coupe and convertible.

At the rear, the Bentayga gets a full-width tailgate with elliptical lights. The license plate has been moved down into the bumper for a cleaner appearance. It has wide, split tailpipes.

“The level of investment in this car is significant,” Bentayga product line director Chris Cole told Automotive News Europe at a pre-reveal of the SUV in March.

“With new entrants such as the Rolls-Royce Cullinan, Aston Martin DBX and Lamborghini Urus, we wanted to give it a significant design step,” Cole said. “We wanted people to really see it as a new car.”

The Bentayga's grille has been redesigned so it sits 1.18 inches higher to give the SUV a more dominating look. The front fenders were reduced in width by 10 mm, while the rear wheels were pushed out by 10 mm.

“The engineers didn’t immediately fall in love with us when we mentioned this, but it really improves the stance a lot,” said Stefan Sielaff, Bentley's head of design.

The Bentayga accounted for 45 percent of the automaker's global sales last year, with production of 5,232 vehicles, more than any other model in the lineup.

The SUV has been a notable success since it was introduced in 2015, creating a new niche in the ultraluxury sector.

The light truck’s popularity allowed the design team to be braver on the upgrade than it had been the first time around.

“It was good to do something more neutral then because it was the first time Bentley was doing an SUV, so it was a bold statement, but not in your face,” Sielaff said. “This time, we could try something a bit more extroverted to give it a more modern appearance.”

The revamped Bentayga will initially only be available with a V-8 engine when it goes on sale this year. The engine develops 542 hp and 568 pound-feet of torque. The V-8 currently accounts for about 70 percent of the SUV's sales, the company said.

The plug-in drivetrain will have a longer battery-only range, Cole said, without providing more detail. The plug-in hybrid variant accounts for 10 to 15 percent of Bentayga sales, but “the indications are that it will grow, particularly in Europe and China,” he added.

Inside, the SUV now has a digital screen behind the steering wheel in place of traditional analog dials. It also incorporates a wider screen in the center of the dashboard.

The Bentayga has a high-resolution 10.9-inch touch screen that spans the entire width of the center fascia for a more contemporary look.

Above the screen, Bentley has added an elaborate sculpture made of anodized aluminum that uses the Bentley ‘B’ logo as inspiration to house both vents and an analog clock.

Bentley has also included new veneers, including aluminum cut with a 3D effect that references the Bentley matrix grille. 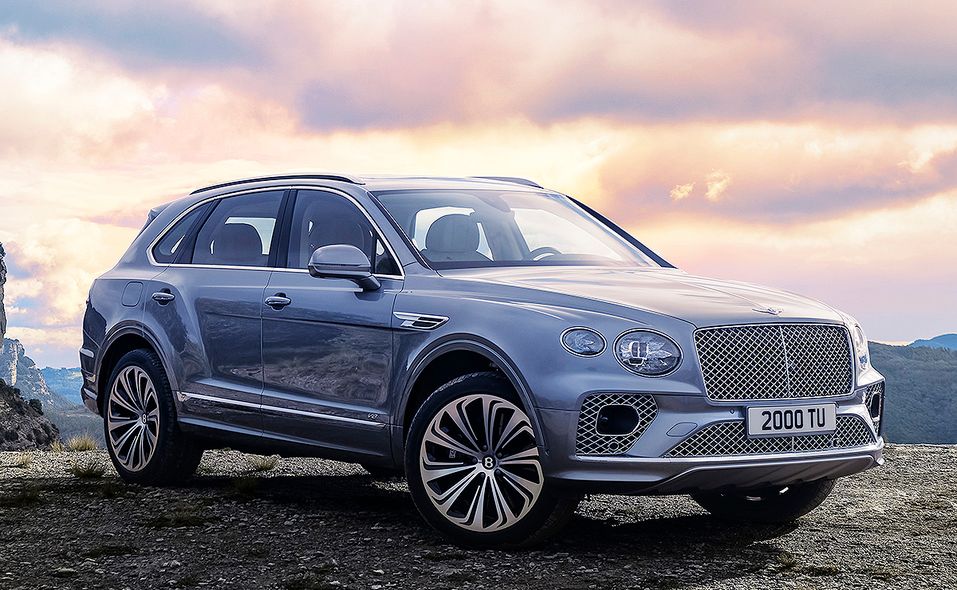 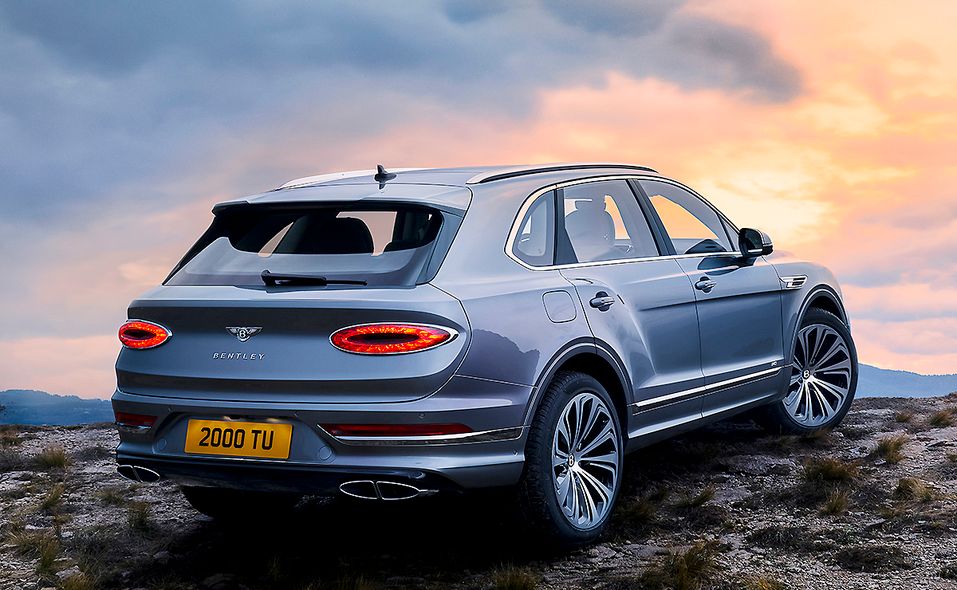 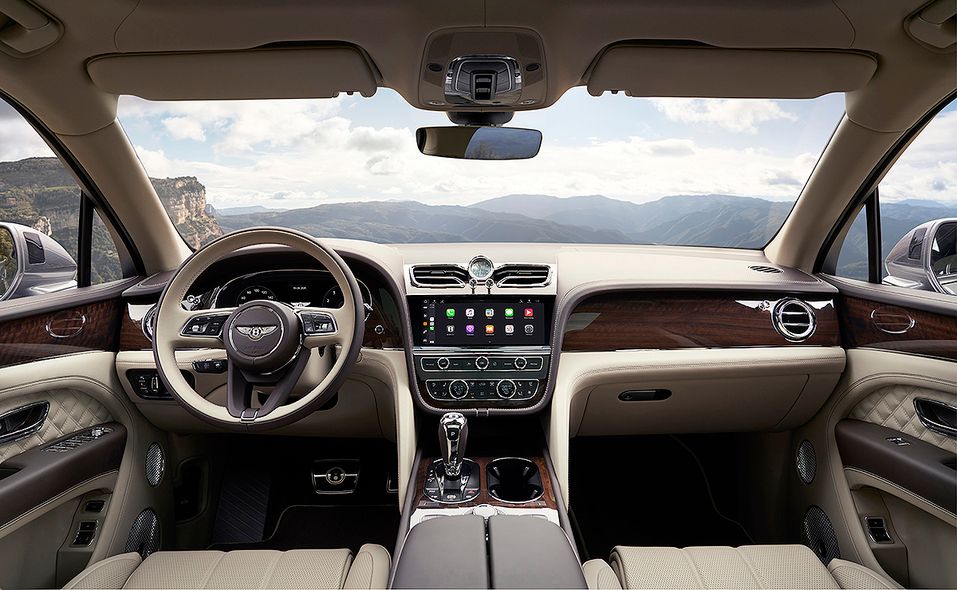 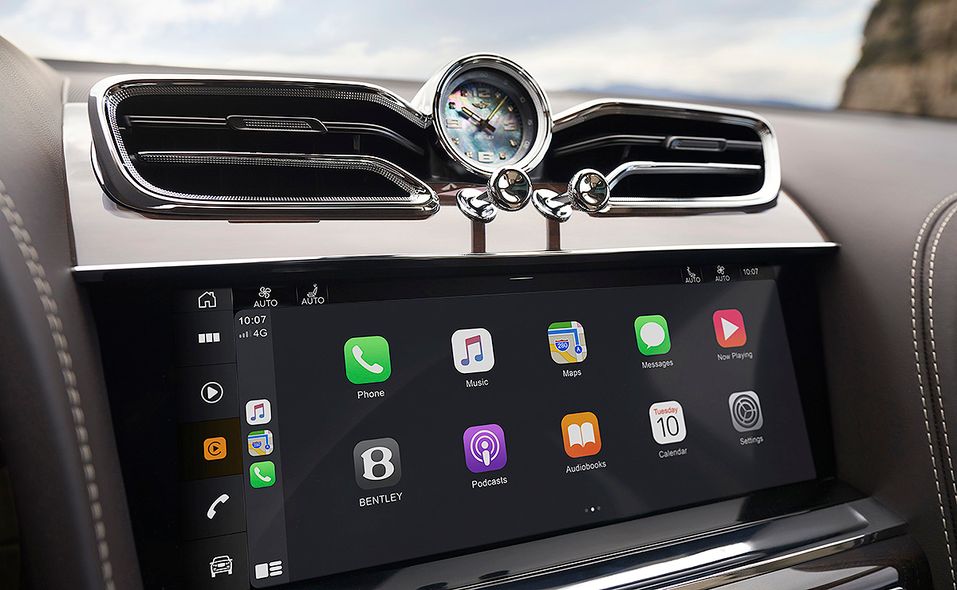 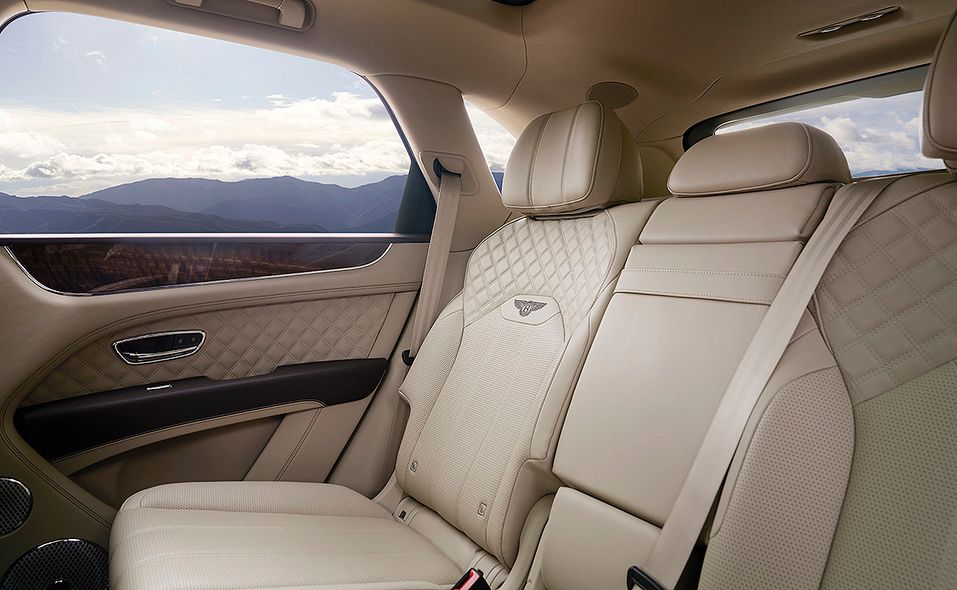 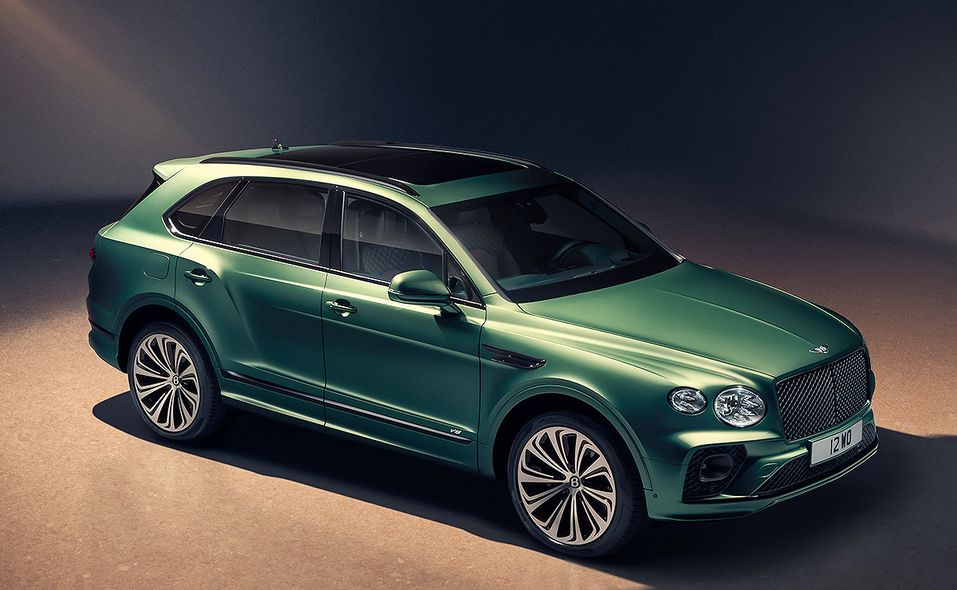 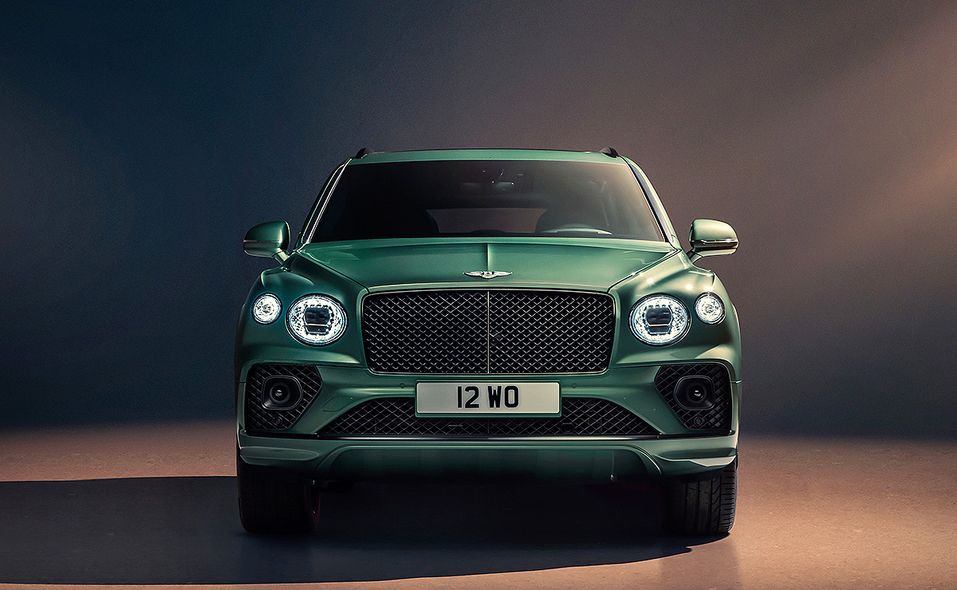 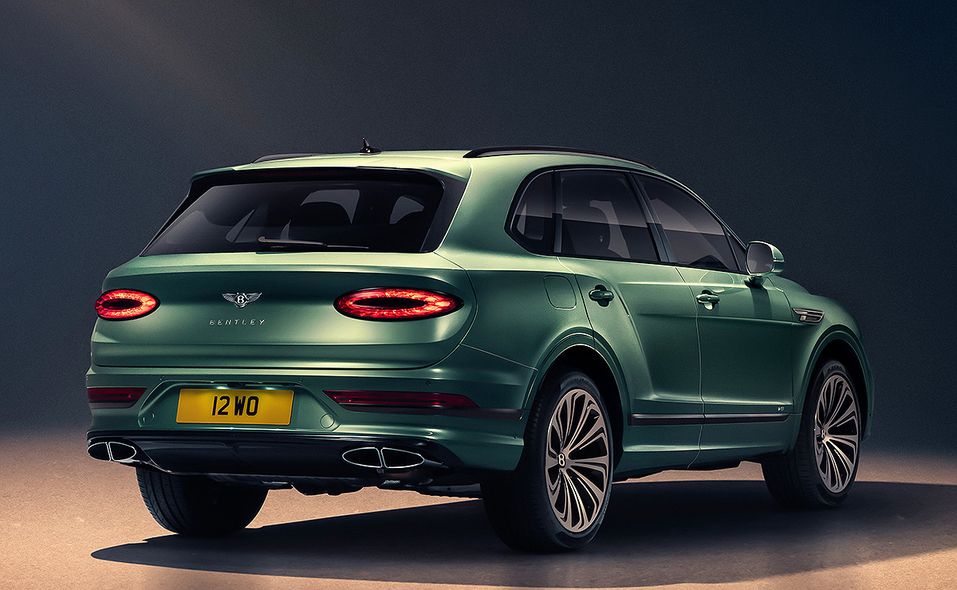 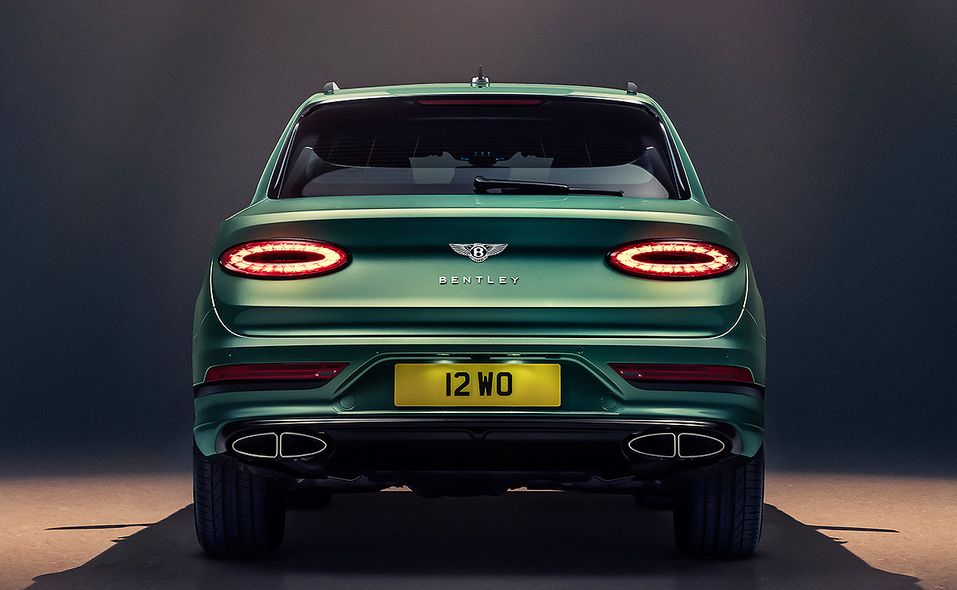 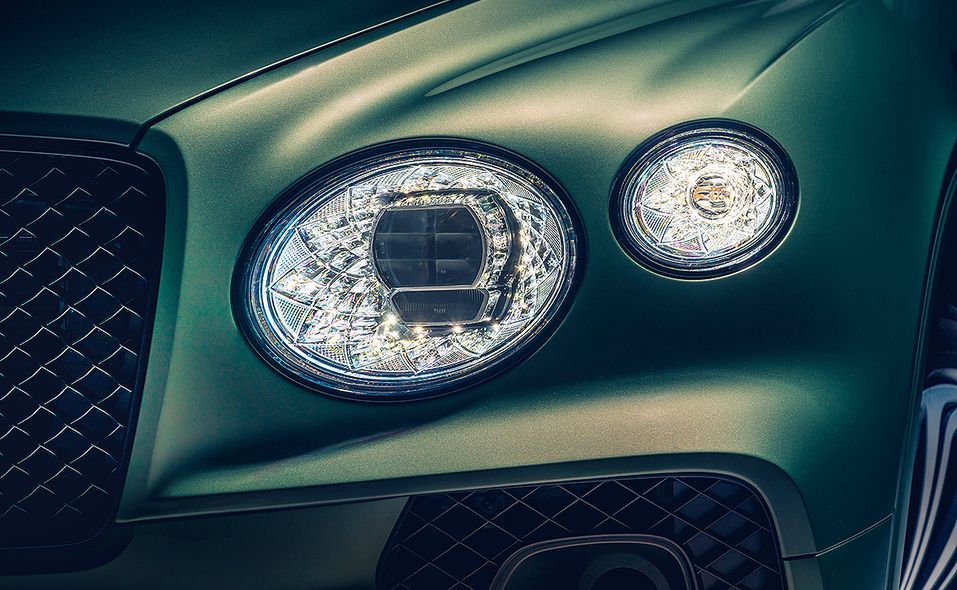