The extreme Ford Bronco Raptor SUV, available this summer, starts at $69,995, including shipping. Most 2022 models will go to existing Bronco reservation-holders.

DETROIT — Ford Motor Co. is beefing up the Bronco SUV with a Raptor variant meant to appeal to the most extreme off-road racing enthusiasts.

The 2022 Bronco Raptor starts at $69,995, including shipping, and will be available this summer, Ford said Monday.

It is 9.8 inches wider than the base model and comes with a stronger steel frame, new shock towers that allow for increased wheel travel, upgraded Dana axles, more towing capacity and 37-inch Goodyear tires, which Ford says is the largest on any current production SUV.

"We poured all of our passion and all of our Bronco and Raptor know-how into creating this absolute desert-racing beast," Ford CEO Jim Farley said in a statement. "It's the real deal. It's not for show and it's not for everybody. But for people who love to get out in the wild, it's the ultimate. And only Ford could create a Bronco Raptor."

Ford officials expect Raptor buyers to take the vehicle through desert sand and over mountain rocks but also use it as a daily driver.

The vehicle's rock-crawling capabilities help differentiate it from the other dinosaur-badged product in Ford's portfolio: the F-150 Raptor.

"We have a ton of great capability in the base Bronco...but there was the ability to push the capabilities of the vehicle even further and tie it in with that Raptor DNA," said Esteban Plaza-Jennings, Bronco brand manager. "There are some pretty unique product propositions between the two vehicles."

FORD
The Bronco Raptor will be available in summer 2022.

The Bronco Raptor, which comes exclusively as a four-door model with a hardtop roof, features a unique "Baja mode" for high-speed desert runs, and a new tow/haul mode. It has a 4,500-pound tow rating, 1,000 pounds more than the base Bronco.

Like the base Bronco, the Raptor's doors and roof can come off, although it comes with a B-pillar crossbar across the roof for added stability that normal Broncos lack.

Inside, the vehicle is equipped a new digital cluster display as well as a 12-inch center touchscreen, larger than the base Bronco's standard 8-inch screen. The steering wheel is thicker and comes with Raptor-unique badging, paddle shifters and buttons.

There are a number of orange accents throughout the cabin, including on the rotary shifter and grab handles. Customers can also order optional orange-colored seatbelts.

"The Bronco Raptor interior was designed around what we know hardcore off-road racers want in a vehicle," Ryan Olsson, design manager, said in a statement. "From the all-new Performance View on the cluster and unique steering wheel with paddle shifters and fingertip access to Raptor-specific controls, to its race-ready, high-bolster front seats, Bronco Raptor leaves the factory ready for the starting line.

FORD
The 2022 Ford Bronco Raptor's doors and roof can be removed and it features a B-pillar crossbar across the roof for added stability that the standard Bronco lacks.

Ford executives declined to discuss volume, but said a majority of the Bronco Raptor's 2022 model year allocation will go to those Bronco customers who have already placed a reservation but have not yet converted to an order. Those customers can begin ordering the Bronco Raptor in March.

Plaza-Jennings said Ford still has tens of thousands of customers in the order bank waiting for the vehicle.

The Bronco suffered through early roof quality issues that delayed some builds, although the company has worked through the problem.

The Raptor is among three new variants that will expand the Bronco family this year.

The automaker plans to introduce an Everglades trim, with a factory-installed winch and snorkel, as well as a hyper-limited, $250,000 Bronco DR model featuring a V-8 engine. 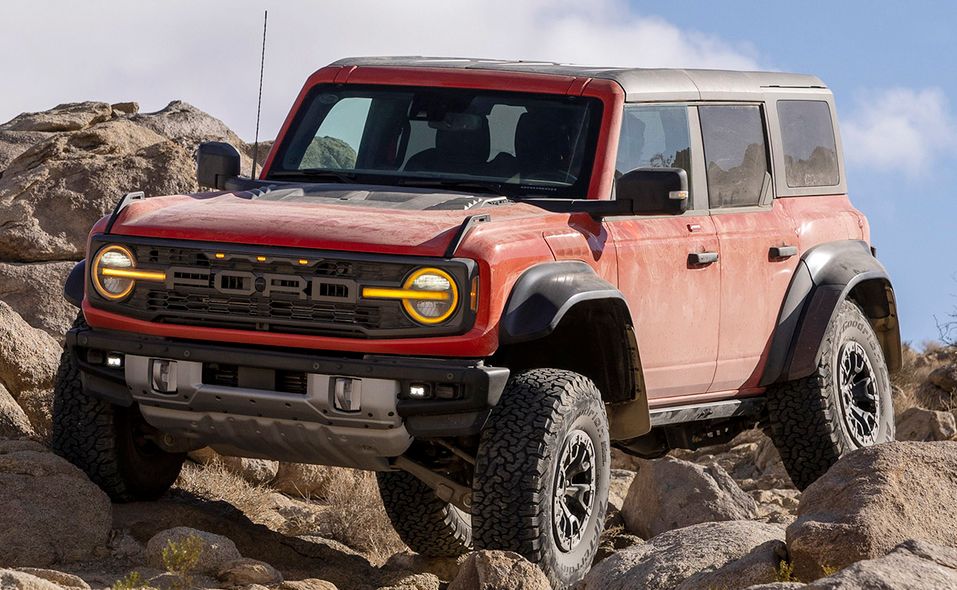 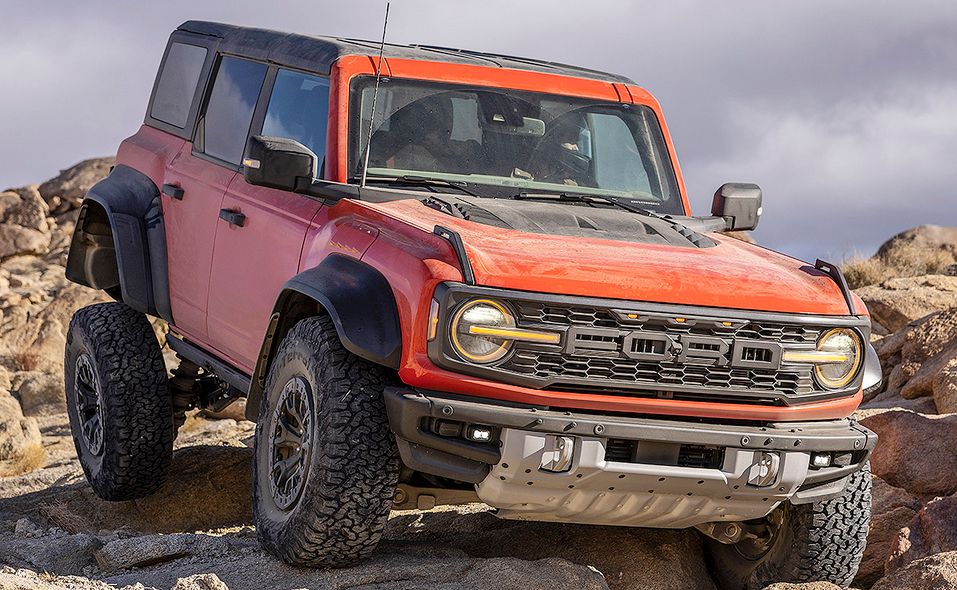 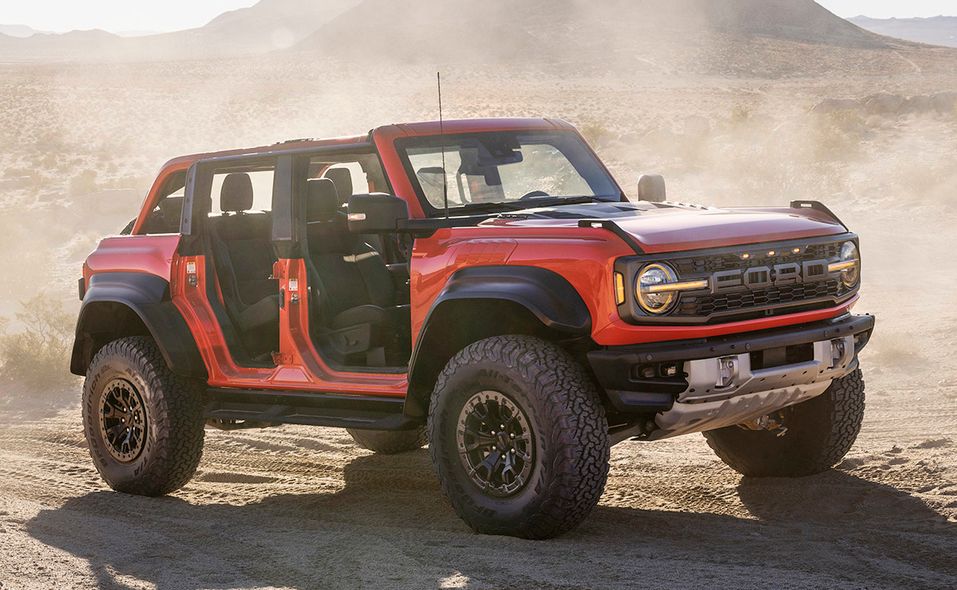 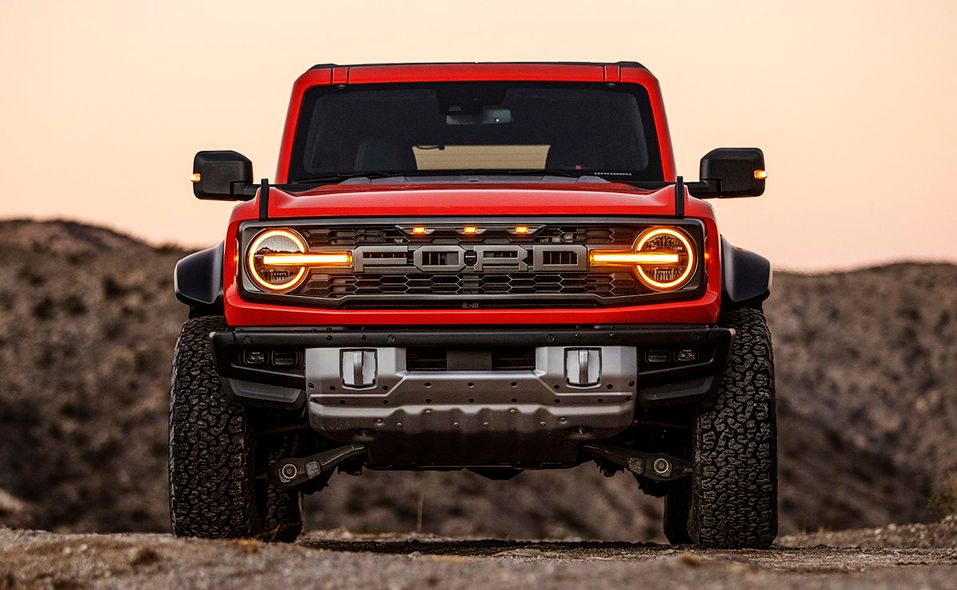 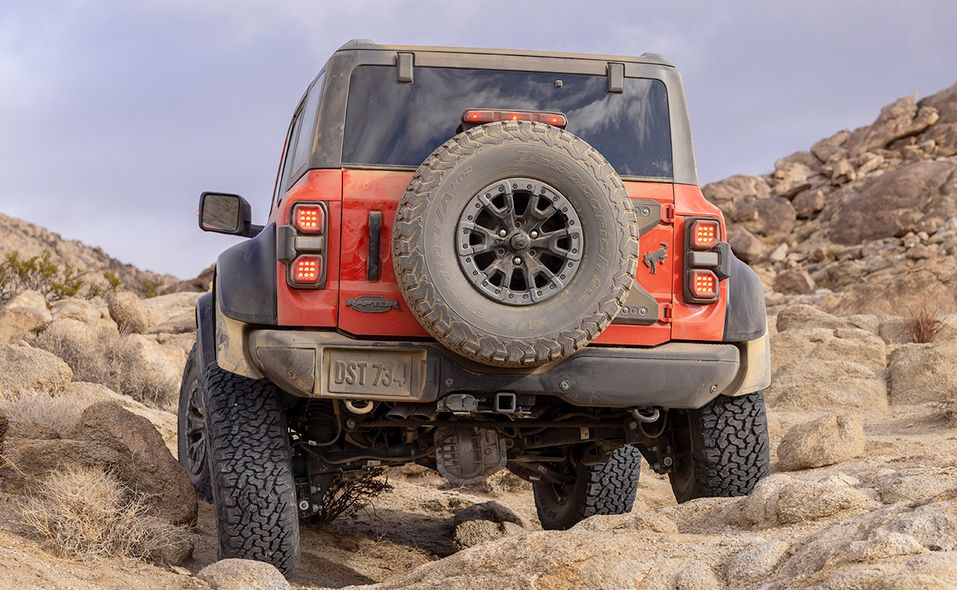 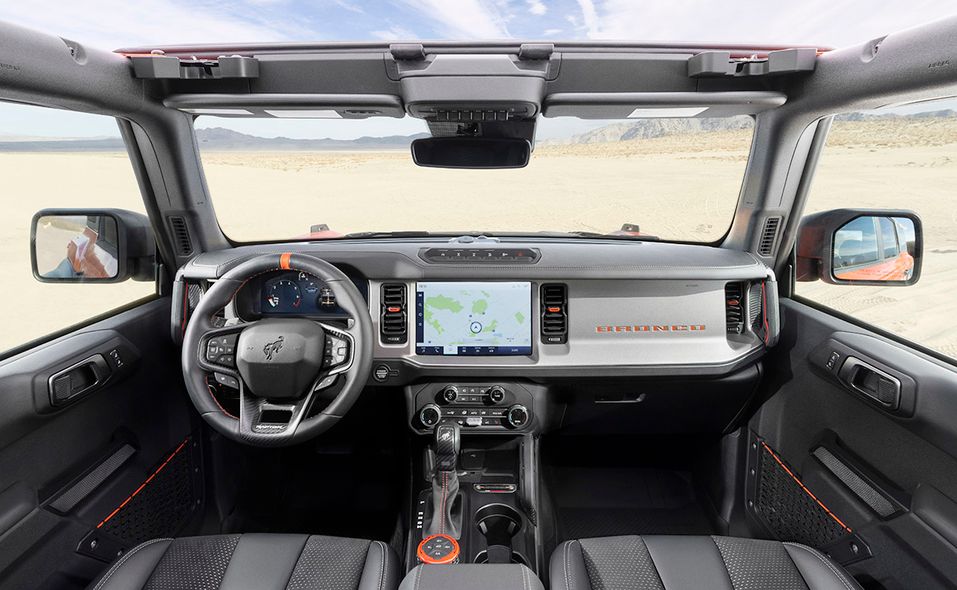 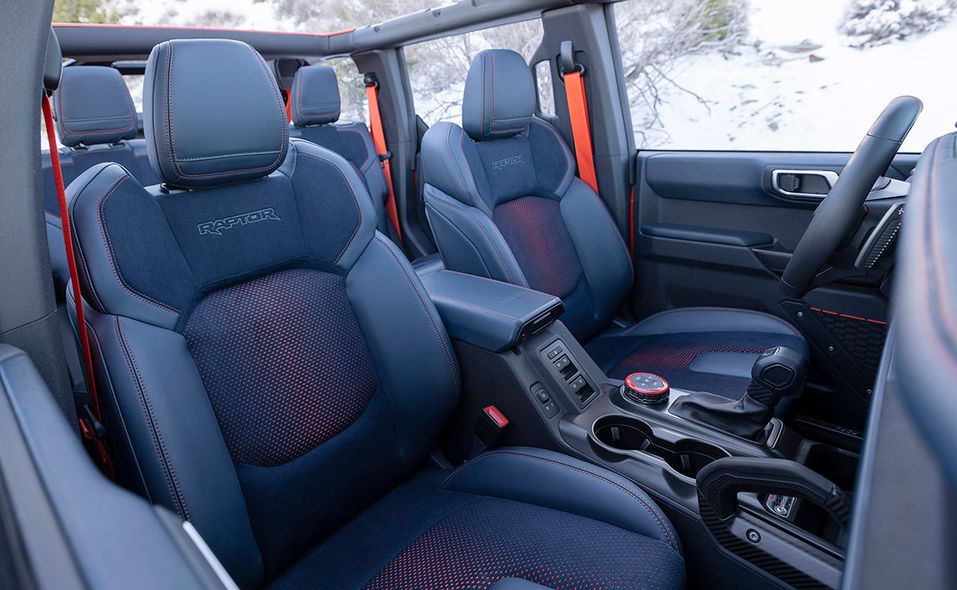 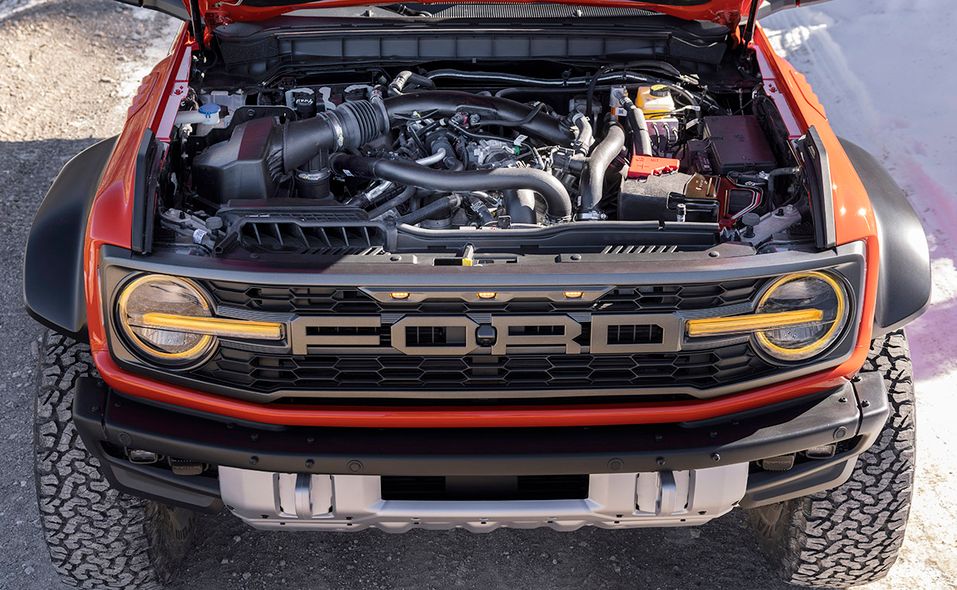 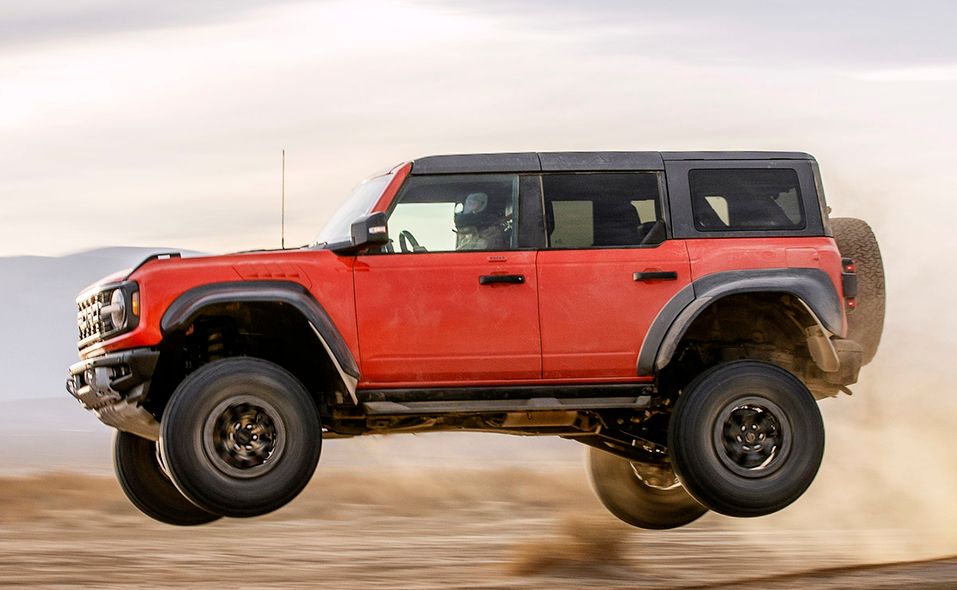 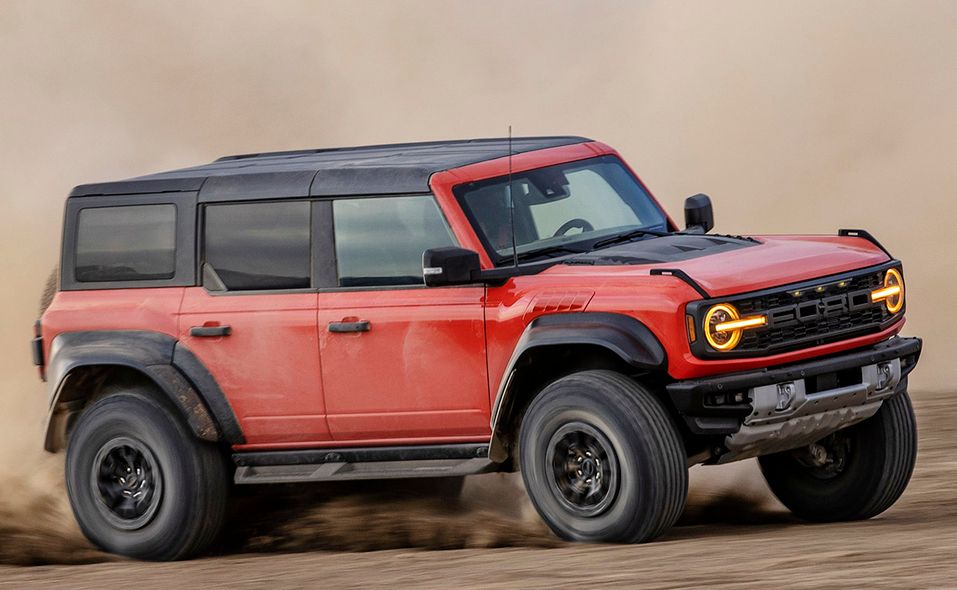