How 475 subscribers view the shortage, its implications and what they are doing to navigate the crisis

A special report from the Automotive News Research & Data Center

As the impact of the more than yearlong coronavirus pandemic began to subside, companies operating in the automotive industry had a lot to look forward to in 2021. The vaccine rollout in the U.S. combined with growing consumer optimism and forecasted pent-up demand resulted in an optimistic outlook that the industry was back in a big way. Early-year sales proved it was. U.S. new-vehicle sales in March were the strongest for the month in more than 20 years. And, despite the lower-than-expected April U.S. jobs report released May 7, 2021, analysts forecast further accelerated growth in the second and third quarters driven by a surge in consumer spending as the economy fully reopens.

Still, specters of another crisis were looming before the end of 2020. In December, automakers and suppliers began warning of a pending semiconductor shortage that was hampering their ability to keep up with consumer demand in China.

Those early warnings have exploded into a global crisis that Ford CEO Jim Farley, in an interview with Automotive News Group Publisher KC Crain, described as "perhaps the greatest supply shock" he's ever seen.

In late April, Ford announced it was suspending production of the F-150 and Explorer for two weeks in May as a result of the shortage, joining Mitsubishi, Jeep, Hyundai, Daimler, General Motors and a host of other automakers that have announced adjustments in their production schedules because they cannot find enough microchips.

Between April 13 and 16, 2021, the Automotive News Research & Data Center conducted a survey of 475 Automotive News subscribers and readers to understand their views on the crisis; explore their opinions on the implications for national security, America's manufacturing competitiveness and the Biden administration's plans for investment in U.S. infrastructure and U.S.-based semiconductor manufacturing; and examine how automakers and suppliers are navigating these turbulent times. We share their perspectives in this report. 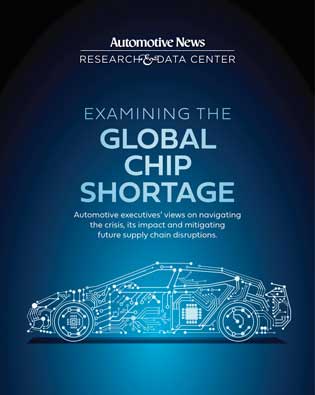