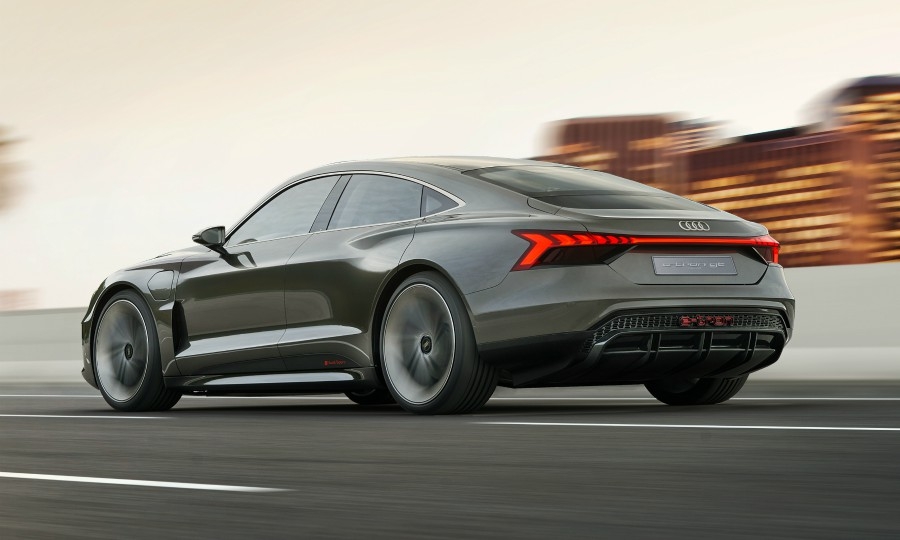 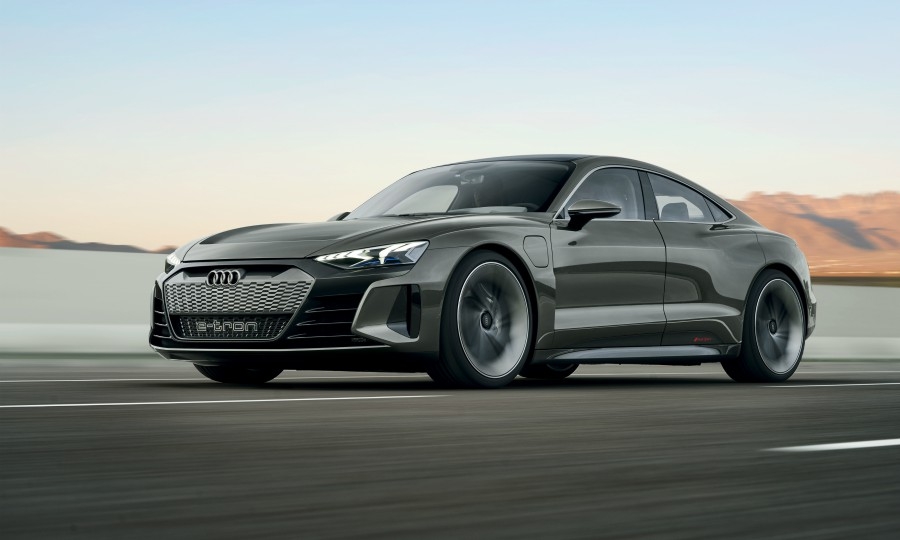 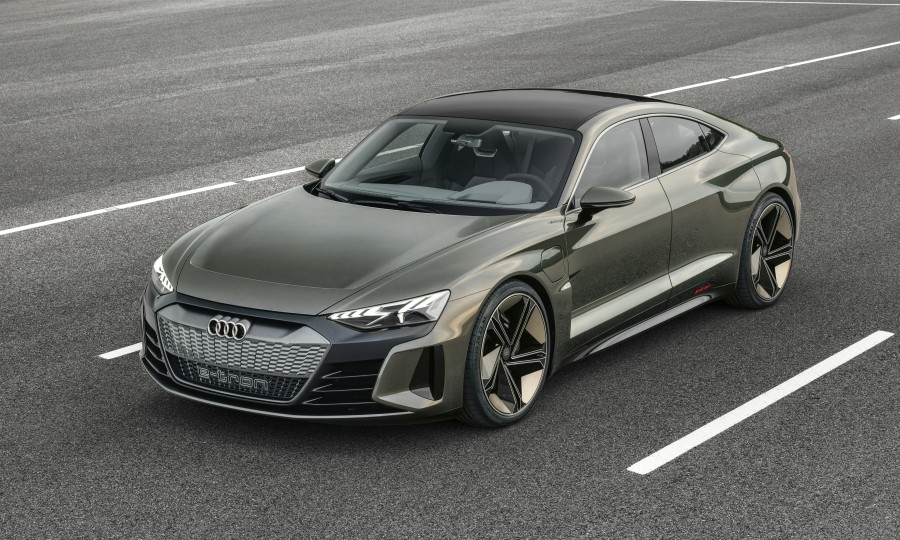 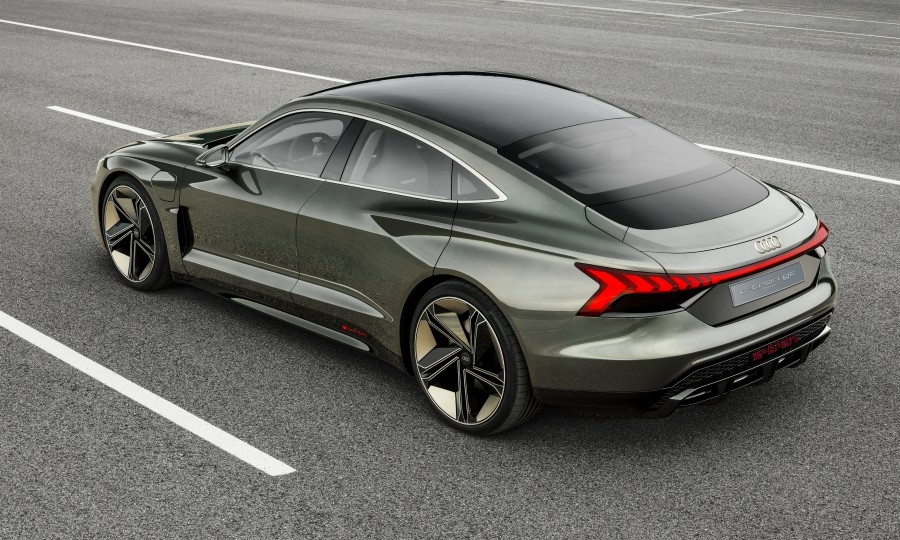 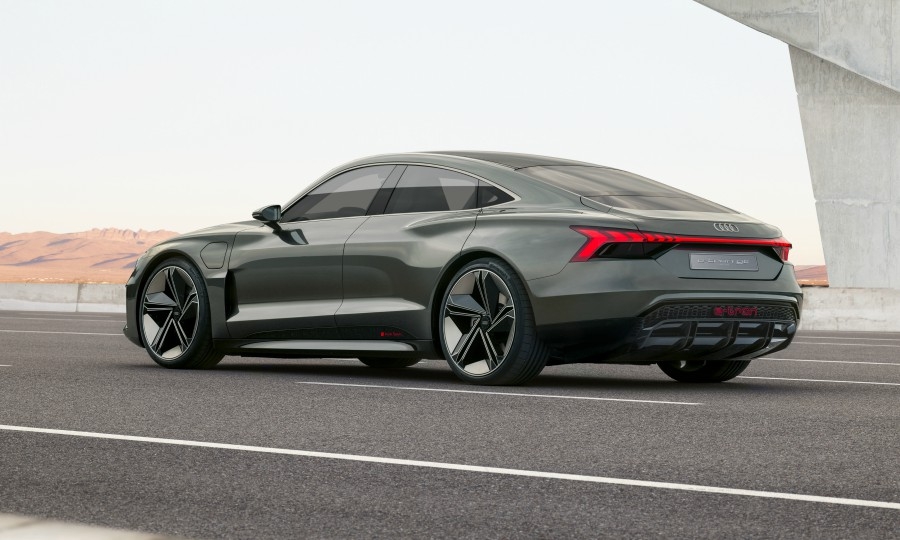 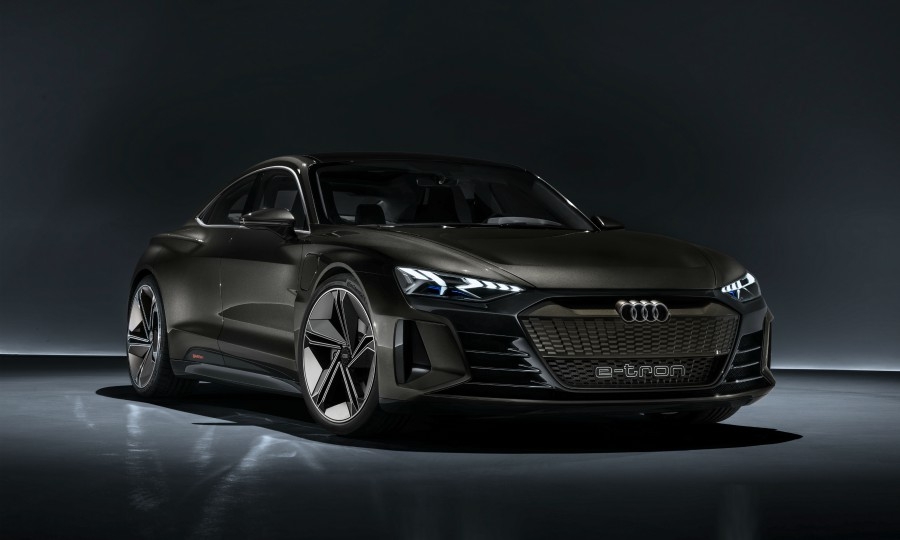 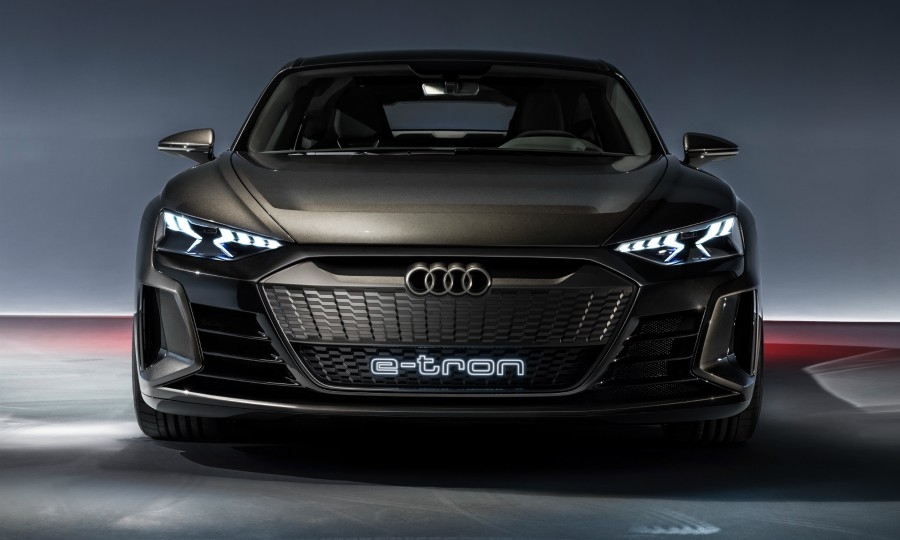 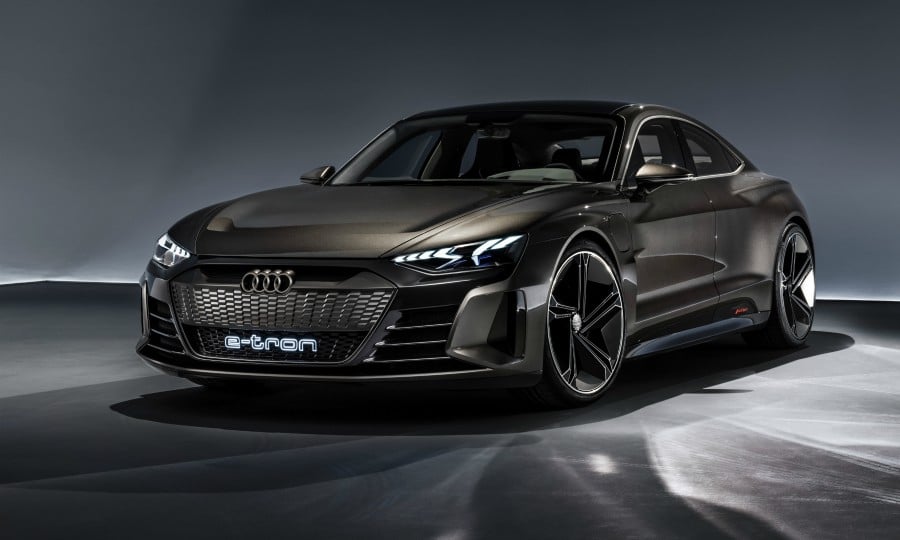 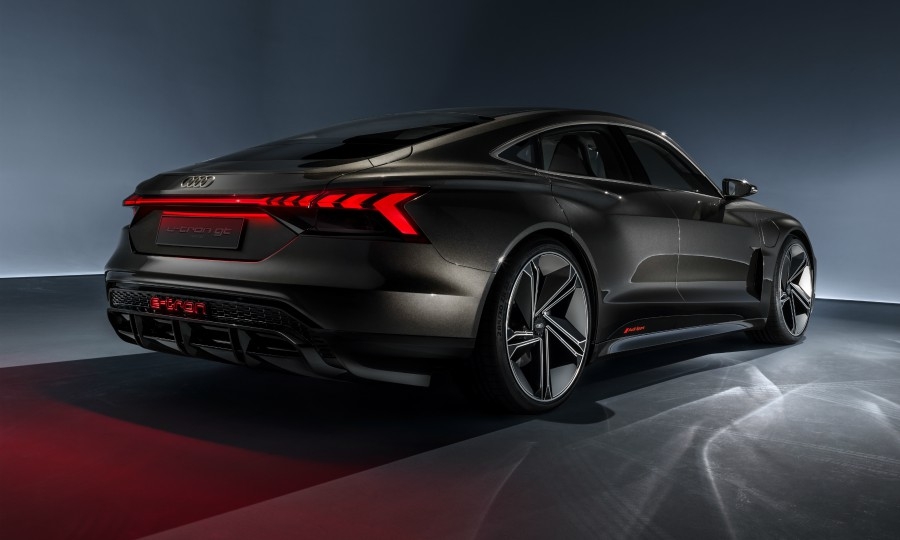 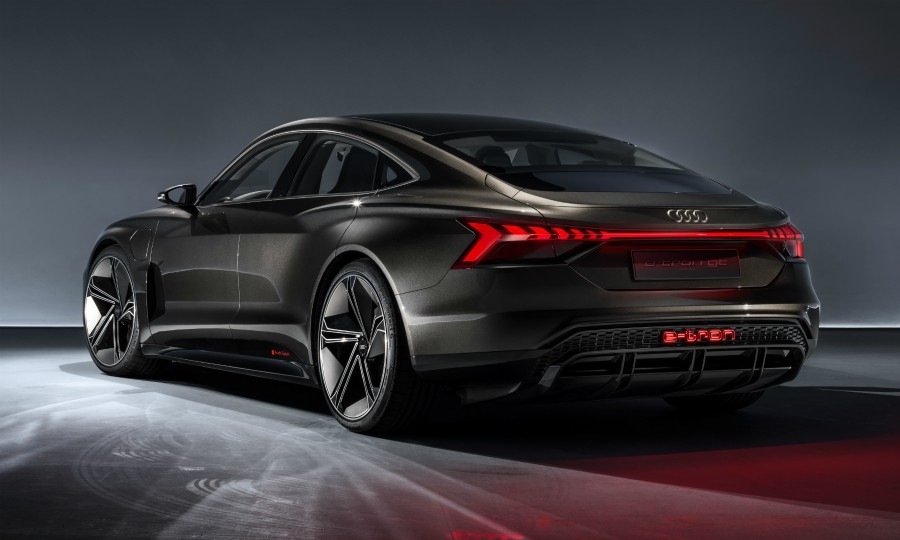 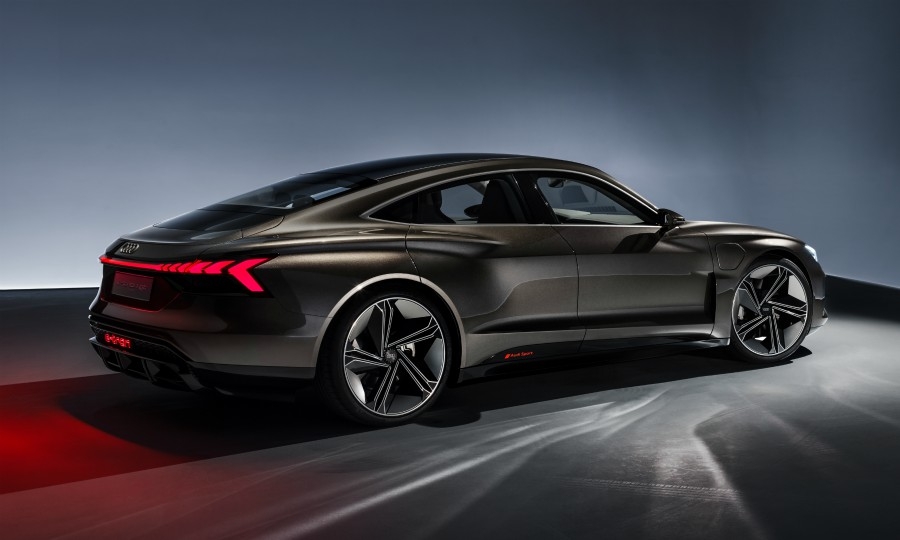 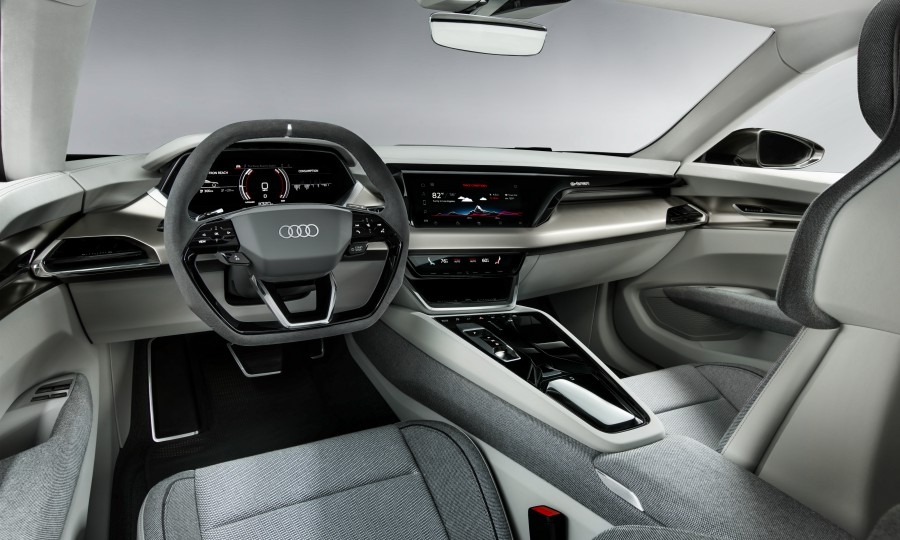 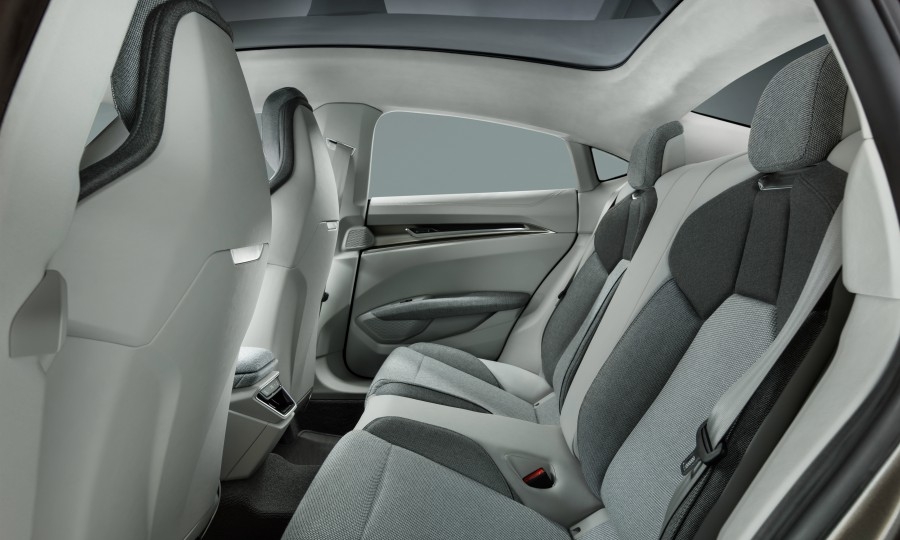 LOS ANGELES -- The next salvo in Audi's planned multiyear electric vehicle onslaught is a low-slung, wide, all-wheel-drive performance sedan with a 90-kW-hour battery pack and an 800-volt recharging system said to be able to achieve an 80 percent recharge in as little as 20 minutes.

The Audi e-tron GT concept -- a follow-up to the e-tron crossover the brand first showed in September in San Francisco and for which Audi dealers are already taking orders -- is expected to enter production in late 2020 and begin deliveries in 2021. A derivative sportback version of the e-tron crossover is also due to arrive in 2019.

Audi of America President Mark Del Rosso predicted that 30 percent of the premium brand's sales would be EVs by 2025. The brand plans to have at least a dozen full-electric vehicles in its portfolio by 2025.

Developed in close collaboration with sister brand Porsche, Audi's e-tron GT concept uses two independent axle-mounted electric motors to deliver the equivalent of 590 hp, with electronic controls to deliver torque as needed to any or all of the wheels. Audi says the range of the e-tron GT's battery pack is roughly 250 miles and that the performance sedan can accelerate from 0 to 62 mph in about 3.5 seconds. Top speed of the e-tron GT concept is limited to 149.1 mph to improve range, the brand says.

Equipped with all-wheel steering and a low center of gravity similar to the brand's R8 supercar, the e-tron GT concept benefits from aerodynamic styling and a wide stance to enhance driving performance and road feel, Audi says.

For styling, designers picked up cues from the e-tron crossover as well as the brand's recent history of sportback derivatives to provide an alternative to competitors' car-or-crossover Hobson's choice. The e-tron GT concept's wide, broad-shouldered fascia is accented by matrix LED headlights with laser high beams and the signature Audi single-frame grille design, complete with lit "e-tron" to more boldly advertise the powertrain. In the rear, the sportback deck seems slightly distended rearward, highlighted by a red horizontal strip of LED lighting across the whole width, with individual wedge-shaped lighting units at the edges. Twenty-two-inch tires provide an athletic stance from the side.

Like with the e-tron crossover, Audi engineers employed a sophisticated energy-management system to extend the battery's operating range about 30 percent. To recharge the battery pack, Audi installed an integrated coil in the floor to enable wireless overnight charging. Engineers also integrated an 800-volt wired, high-capacity recharging system capable of bringing the battery pack back up to 80 percent of capacity, or about 200 miles of range, in about 20 minutes.

Audi says the e-tron GT concept boasts a "vegan" four-seat cabin made of sustainable materials, with virtually no animal-based products used. Designers employed synthetic leathers on the racing-style seats and trim pieces and used a recycled fiber-based yarn on the carpeting made from used fishing nets. Still, the cockpit features Audi's latest electronics architecture to display vehicle operations and infotainment systems, with stacked twin touch screens that use haptic responses to operate the systems.

Company officials did not disclose which features of the concept might not make it into the production vehicle.