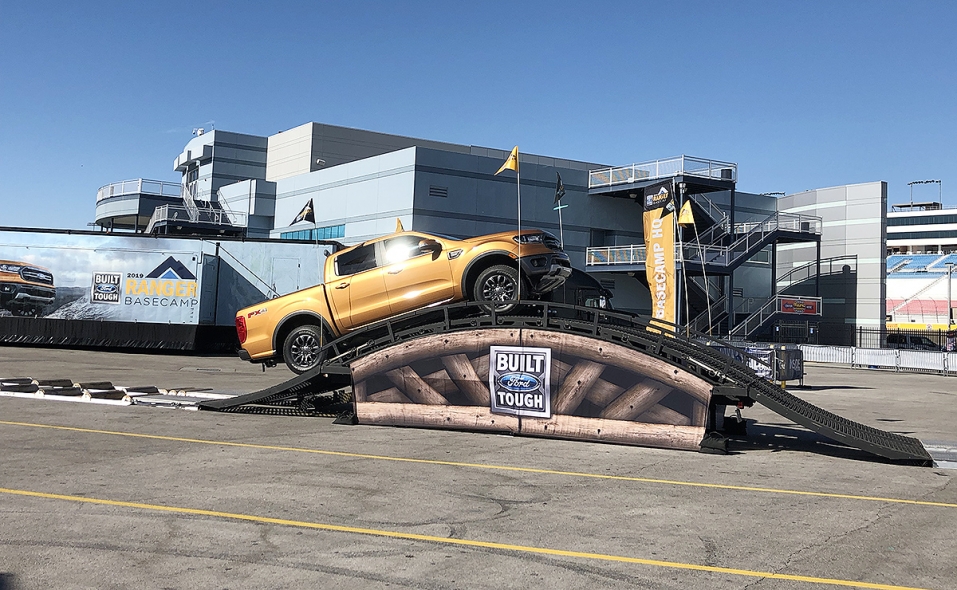 MICHAEL MARTINEZ
Dealers were among the first to drive the 2019 Ranger midsize pickup through an off-road course and a hill that showed off the vehicle's terrain management system.
Share 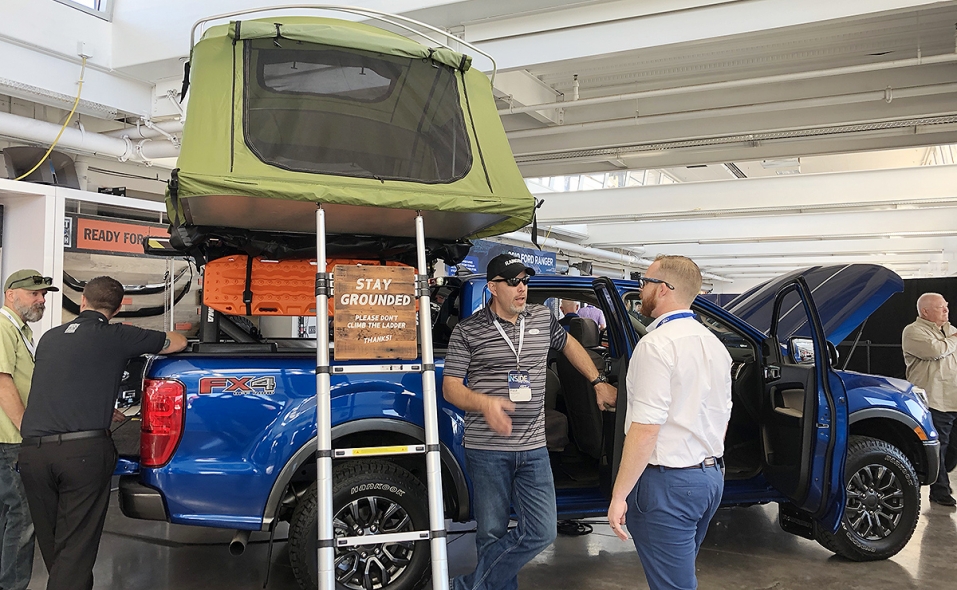 MICHAEL MARTINEZ
Ford showed dealers a number of new parts and accessories for the upcoming 2019 Ranger midsize pickup as part of a new partnership with Yakima.
Share 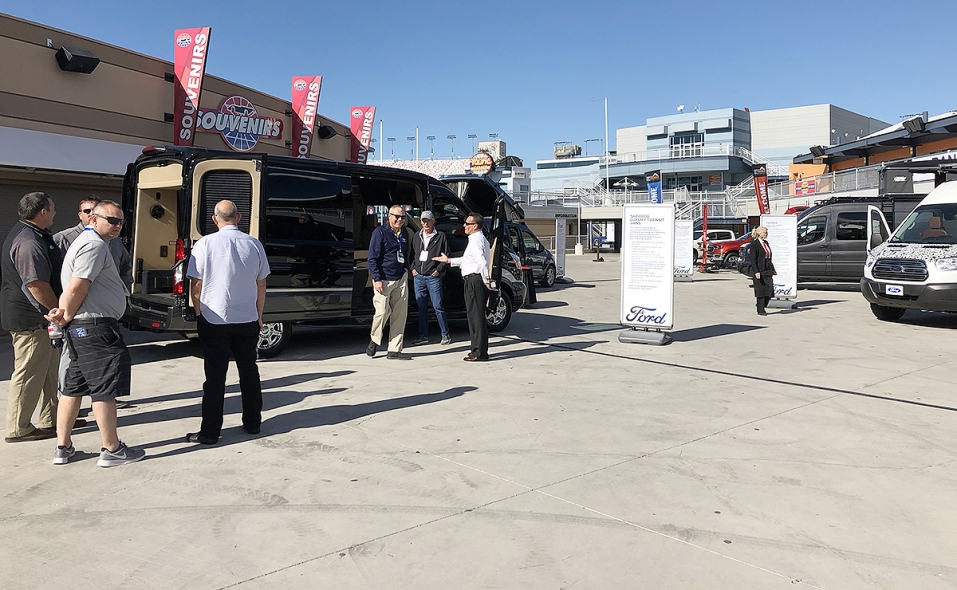 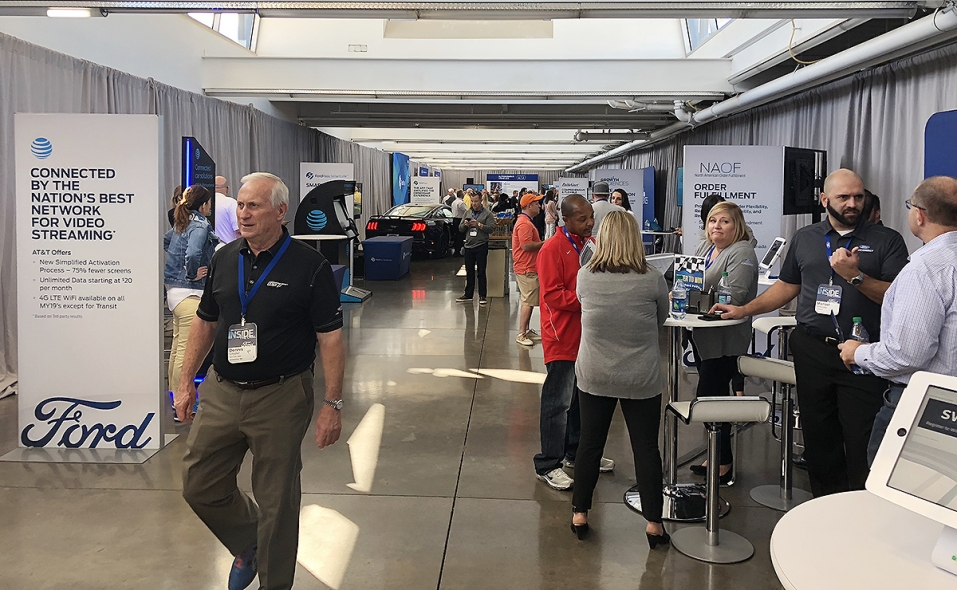 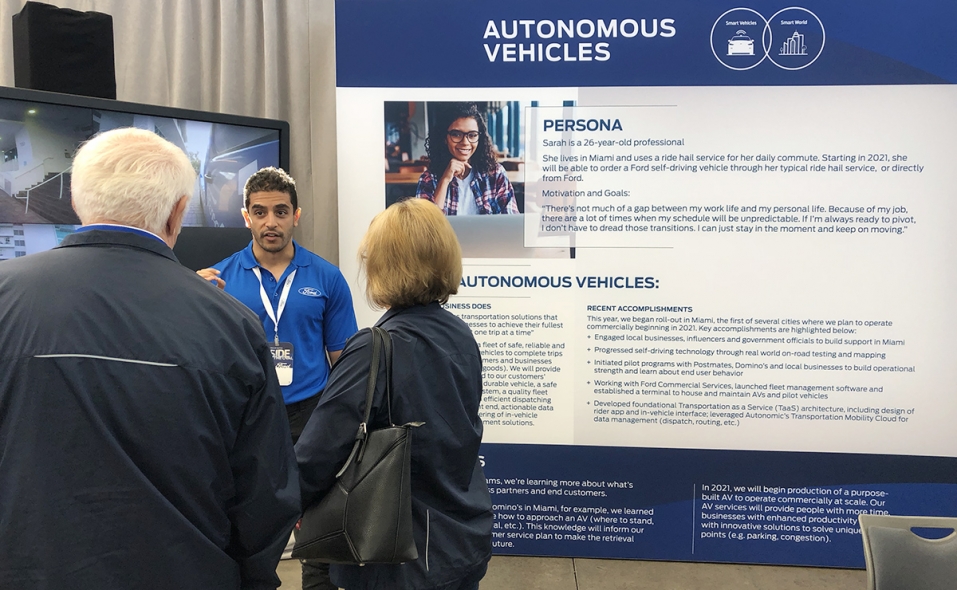 MICHAEL MARTINEZ
Ford showed its dealers how it plans to market autonomous vehicles when it deploys a commercial AV in 2021.
Share 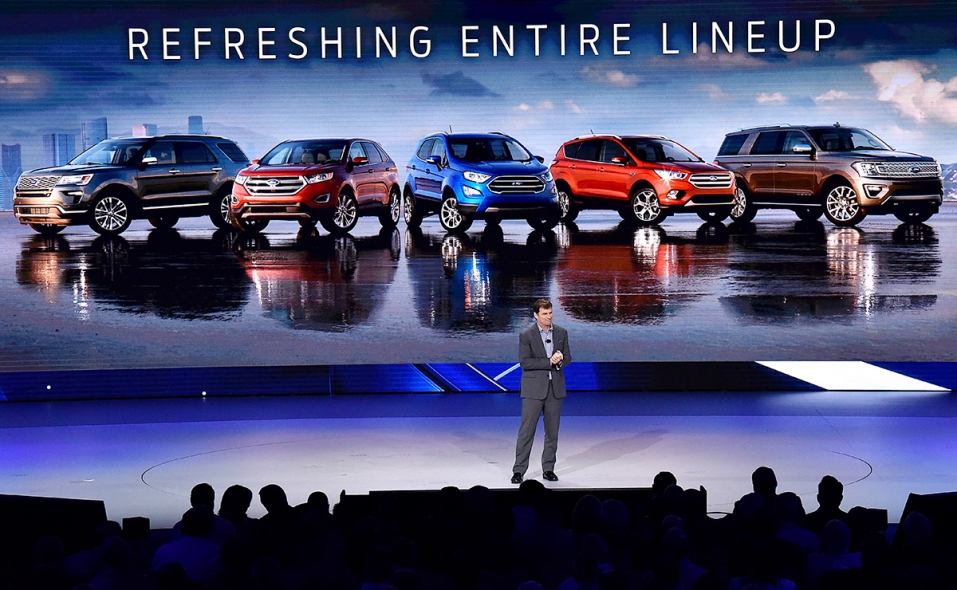 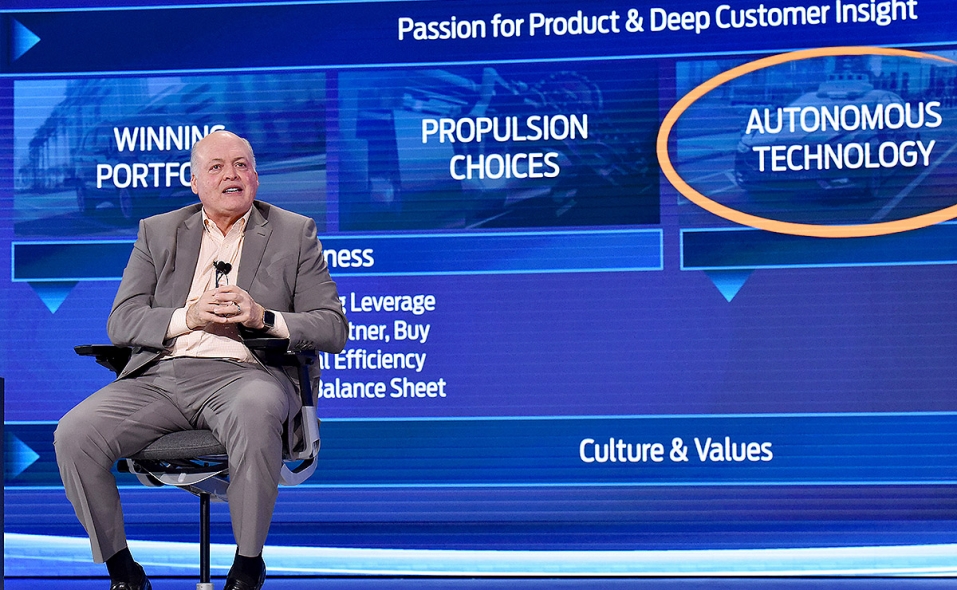 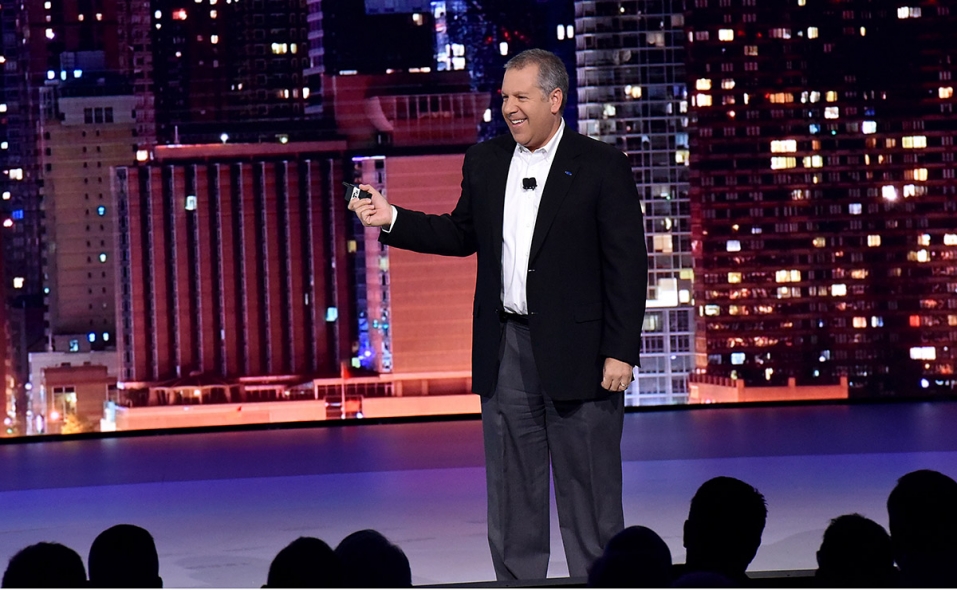 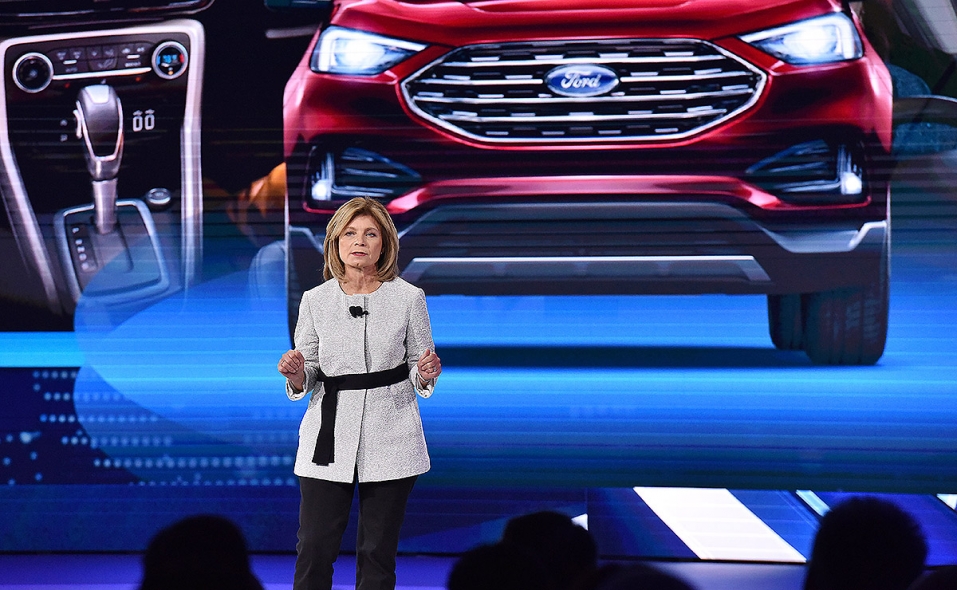 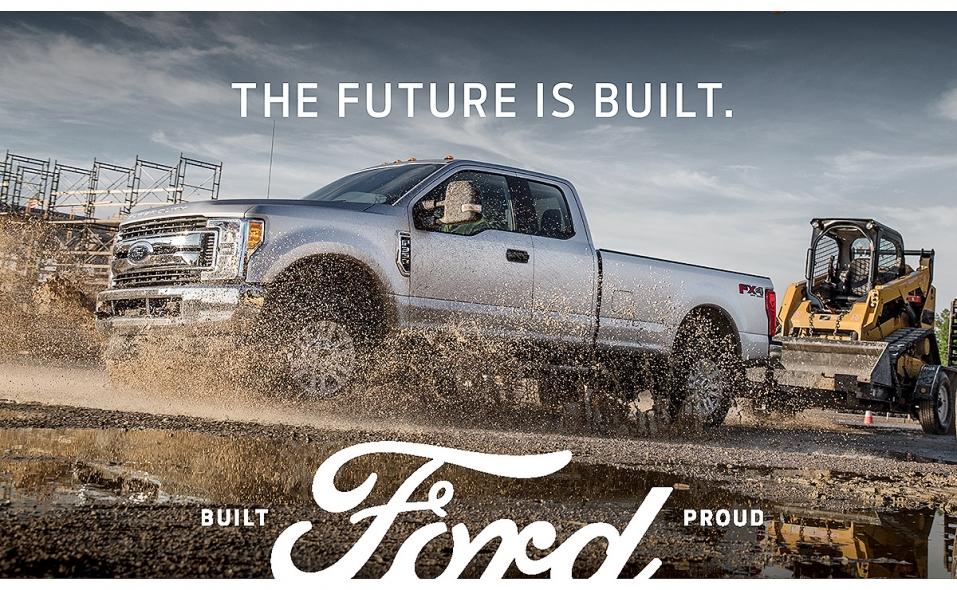 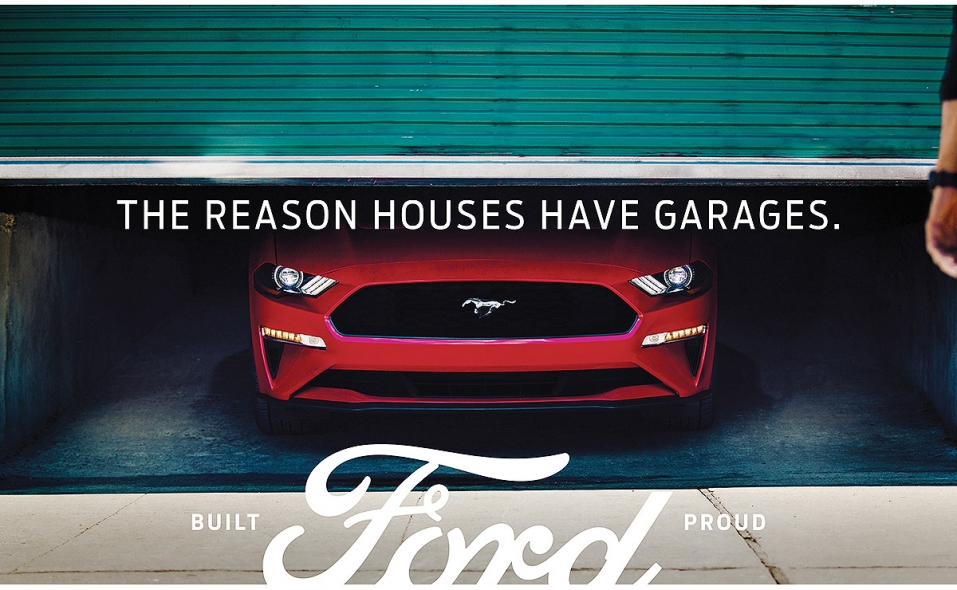 LAS VEGAS -- Ford Motor Co. is shifting its focus from winning new customers to persuading current owners to stick with its namesake brand.

The new marketing approach, designed partly to rebut the impression that Ford is abandoning owners of Fusions and Fiestas as it stops developing new sedans, is part of a sweeping plan that the second-biggest U.S. automaker's leadership team laid out to North American dealers this week at the Bellagio resort here.

The company vowed to shorten its product-development cycle to create the industry's freshest showroom; add affordable non-sedan models to the lineup; run the region through individual vehicle lines to maximize margins; and launch a new advertising campaign that plays up the company's history.

With the Ford brand's U.S. sales falling 2.1 percent through September, Ford stock at a nine-year low and questions surrounding the strategy of CEO Jim Hackett, the company used this year's annual dealer gathering to offer the clearest look to date at its plan and to make an emotional appeal to rally retailers. The meeting is held every year but only a handful of executives typically attend.

Ford shares were essentially unchanged on Friday, closing down a penny to $8.50.

This year, virtually the entire senior leadership team was there, including Hackett, who has acknowledged not being as visible to dealers as he would have liked in his first 17 months on the job.

"This is the first time I'm aware of where he took the time -- 20, 25 minutes on stage -- and really gave an outlook of where he's been," said Mike Pallotta, owner of Pallotta Ford-Lincoln in Wooster, Ohio. "It was great to hear the message directly from him."

Dealers started the meetings, called "Inside the Oval," with a series of hands-on experiences at the Las Vegas Motor Speedway.

They were among the first to drive preproduction models of the Ranger midsize pickup through an off-road course and to demonstrate its ability on rough terrain; they took hot laps in Mustang Bullitts; drove the Edge ST; saw the new Police Interceptor hybrid that's based off the next-generation Explorer; toured various new configurations of the Transit and Transit Connect vans; and walked through a hallway featuring demonstrations of products such as FordPass, B&O sound systems and Ford's telematics service for its fleet-sales businesses.

They were among the first to see about 150 parts and accessories for the Ranger offered as part of a new partnership with Yakima. And they could enter their name to win rides in the GT supercar.

Back at the Bellagio, they met with Ford executives in various conference rooms plastered with messages from the automaker's new "Built Ford Proud" ad campaign. One wall featured the Bullitt with the phrase "Never on Autopilot," while another showed a sprawling manufacturing plant with the words, "Small batches should be reserved for whiskey."

Dealers also glimpsed a number of the campaign's television spots, which will start to air Saturday.

The meeting concluded with an emotional call to action featuring an internal video titled "It's Time."

"It's time to bring swagger back to the Ford Motor Company," actor Bryan Cranston said in a voiceover that played amid shots of the company's products. "It's time to have pride in who we are and what we do. It's time the whole world knows how proud we are of our family name, and it's time we take pride in the vehicles we make, of the future we will shape, and of the responsibilities we will take."

Cranston, known for roles in "Breaking Bad" and "Malcolm in the Middle," is featured throughout the ad series.

One of the dealer body's biggest concerns has been a lack of clarity on Ford's product strategy.

Executives faced backlash earlier this year when they announced they would discontinue virtually all of Ford's sedans, offering only a vague promise of adding "white space" silhouettes. Dealers questioned whether Ford would abandon entry-level sedan buyers to rivals such as General Motors, Toyota and Honda.

Ford showed them its future vehicles for the next few years and explained how their total number of nameplates would increase by three by 2023. And Jim Farley, president of global markets, vowed to offer several vehicles in the entry-level, $25,000-and-under price point.

There was one notable exception to the future product showcase: the Bronco.

However, Farley used the hype around the off-roader to have some fun. During his presentation, he promised to show dealers "a Bronco," then flashed a photo on-stage of his own classic 1973 SUV.

Among the biggest changes Ford communicated for the first time was a pivot from focusing on conquesting customers from other brands to retaining loyal buyers.

The automaker plans to center its marketing efforts on keeping customers in the fold, communicating with them more often through connected vehicles and offering perks through a new rewards program on its FordPass app.

"When we did all the data analytics, it became really clear, a loyal owner is so much easier for us to do business with than trying to get a customer from someone else," Farley said. "It was a big aha moment for us."

Ford traditionally has had the strongest customer loyalty in the industry, although it's dipped slightly through July this year to 63 percent, according to data from IHS Markit.

One area in which Ford can target its consumer base: the 13.5 million trucks owned in the U.S. Ford plans to build upon those numbers with a new loyalty program that will roll out in the U.S. next year. Ford declined to provide details, but said customers can earn points to redeem for meaningful rewards and that they fashioned it after studying brands such as Delta, Starbucks and rival automakers like Toyota.

The plan also involves more interaction with the customer after they purchase their vehicle through connected modems, which Ford plans to have on all its nameplates within the next few years. The automaker wants to offer unique experiences, similar to how its Lincoln luxury brand has built a niche with services like standard pickup and delivery and chauffeur services.

"There's so much choice in our industry now and there's so much great product," Farley said. "We really believe now, when you look at the new technology enablers, the next opportunity is to build a much more frequent relationship with the customer."

Ford is trying to shore up its bottom line by boosting the profit margins in North America to 10 percent. To do that, it's reorganized its business to focus on individual product lines.

Farley said one of the biggest discoveries they've made is how profit margin varies on a specific vehicle from region to region. They've started to allocate more inventory to the areas of the country they can make the best returns.

"If you start to see our North America margins go up, we have no new product this year, and it's not coming from the market," Farley said. "It's controllable within our company."

GM teams up with Netflix to tout EVs in Super Bowl ad, shows

GM teams up with Netflix to tout EVs in Super Bowl ad, shows