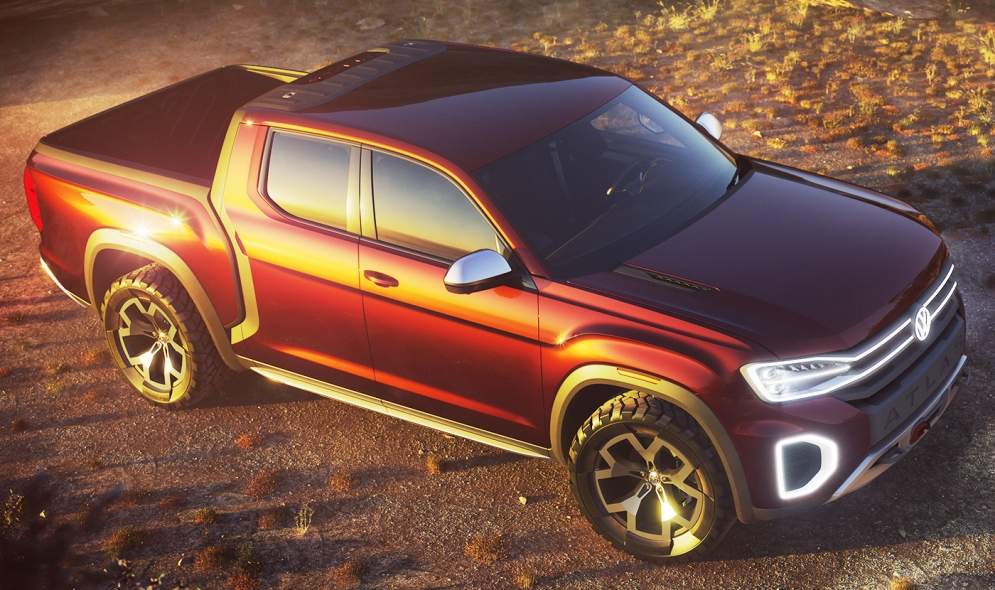 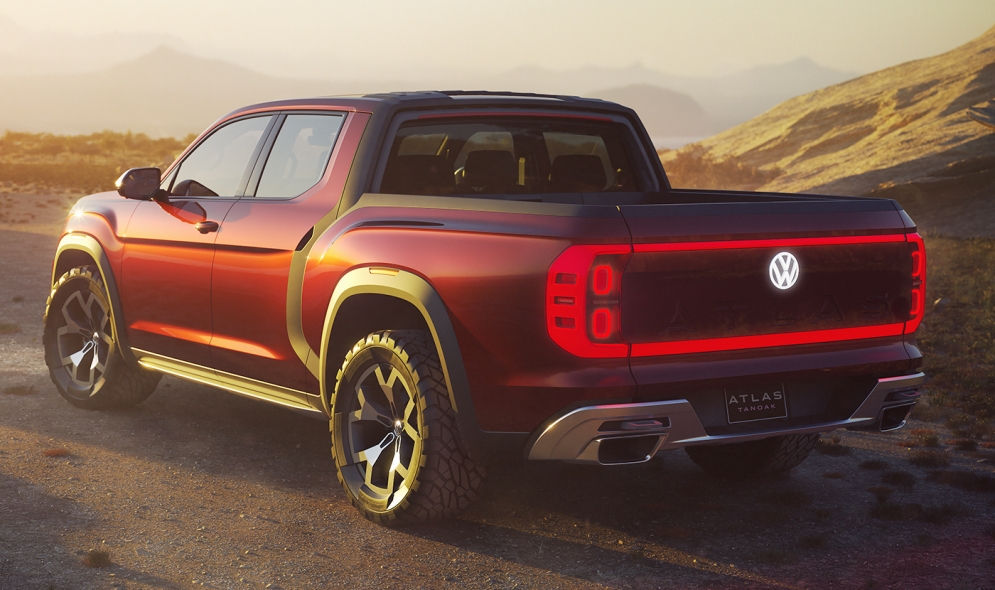 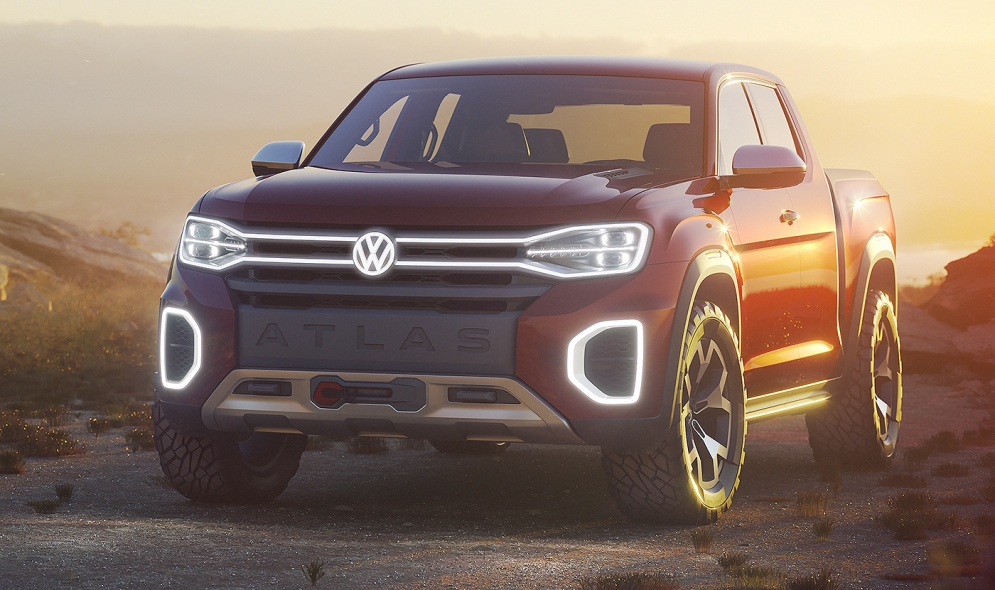 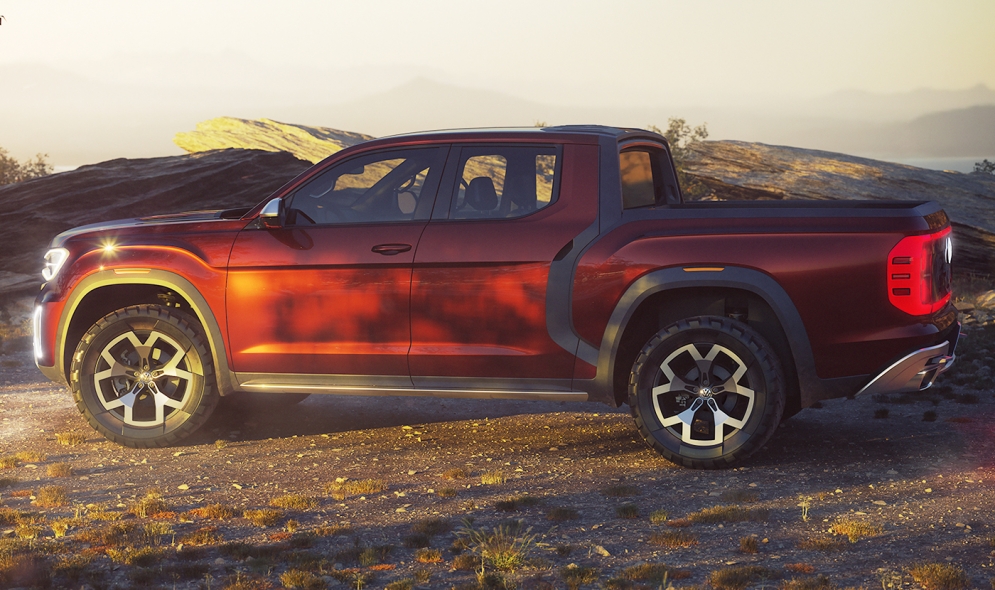 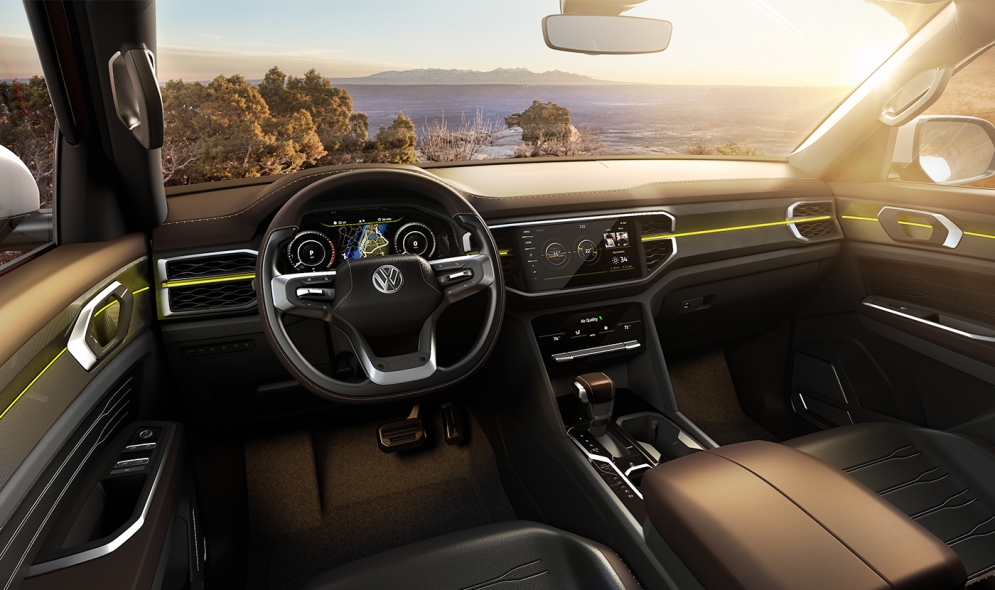 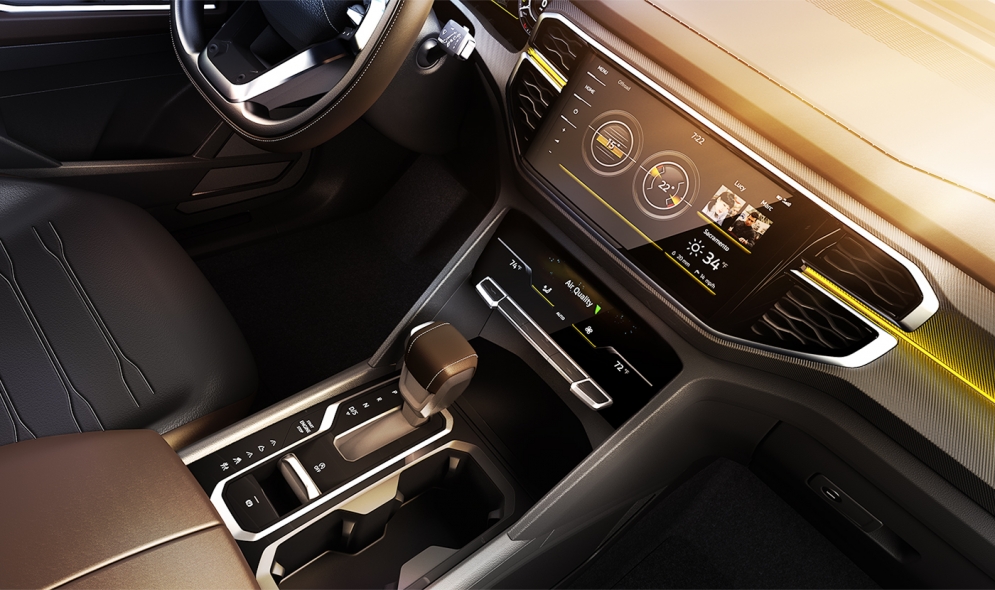 NEW YORK -- The concept unibody pickup Volkswagen introduced Wednesday at the New York auto show would share a platform and powertrain with the brand's three-row Atlas crossover, but is nearly 16 inches longer with nearly 10 inches of ground clearance.

The VW Atlas Tanoak concept -- which shares a name with a tall species of evergreen native to the U.S. Pacific Coast -- features a 276-hp, V-6 engine mated to an eight speed transmission, and has 2 extra inches of ground clearance compared with a standard Atlas.

Like the Atlas, it is built on the company's flexible MQB platform. Volkswagen said it doesn't yet have plans to put the concept into production, but is using it to gauge potential consumer interest, given the brand's volume aspirations of reaching 5 percent of the U.S. light-vehicle market within 10 years. Volkswagen currently has a 2 percent share of U.S. light-vehicle sales.

Speaking at a press event Tuesday evening, Volkswagen Group of America CEO Hinrich Woebcken said the Atlas Tanoak concept is being used to measure whether there are opportunities for Volkswagen to expand into segments where it doesn't now play, just as the sedan-heavy brand has moved aggressively into crossovers in the last few years.

For what is billed as a midsize pickup, the Atlas Tanoak concept is not small. At 214.1 inches long, 79.9 inches wide and 72.6 inches tall, it is larger in every respect than what would be its main competitor, the Honda Ridgeline. The Tanoak has a stretched 128.3-inch wheelbase -- 11 inches longer than the Atlas. The dual-cab concept pickup also has a 64.1-inch bed, about a half inch longer than the Ridgeline, with 50.4 inches of space between the wheel wells and a spare wheel mounted below the cargo bed.

A cargo rail is mounted over the bed, and can be slid the length of the bed, doubling as a cargo carrier for large objects such as canoes or ladders. The all-wheel-drive Tanoak concept rides on 20-inch wheels.

Although it's based on the Atlas and shares its name, the Tanoak concept has a more rugged appearance both in exterior and interior styling than the brand's three-row family hauler. The LED daytime running lights extend into the side profile, and a raised hood, center-mounted winch and carabiners give added rugged appearance, as do wheel arch extensions with incorporated side market lights.

Volkswagen designers had fun with the exterior lighting components on the concept pickup as well. According to the company, when the door is opened, the white VW logo on the grille gradually brightens, then the white light runs over the two crossbars of the grille and into the headlight surrounds. As soon as the moving light strips reach the headlights, the LEDs on the two front light strips swipe out from the logo and back until the LED headlights and lighting elements in the bumper activate. The active LED lighting features are replicated at the rear.

The rear door handles of the dual cab are integrated into the C-pillars, in essence hiding the rear doors of the five-seat pickup concept.

The Tanoak's cabin diverges further from the Atlas. Screens dominate the dashboard and most of the cockpit, with large touchscreens for the infotainment system and Volkswagen's digital cockpit instrument cluster, along with a touchscreen below for HVAC and other controls. On the center console, Volkswagen designers have redesigned the Atlas' shifter grip as well as its 4MOTION off-road control knob into a sturdy sliding mechanism, so that it can be more easily operated with gloved hands.

N.Y. auto show postponed until Aug. because of epidemic
Sponsored Content: Reimagining the Road to the Sale