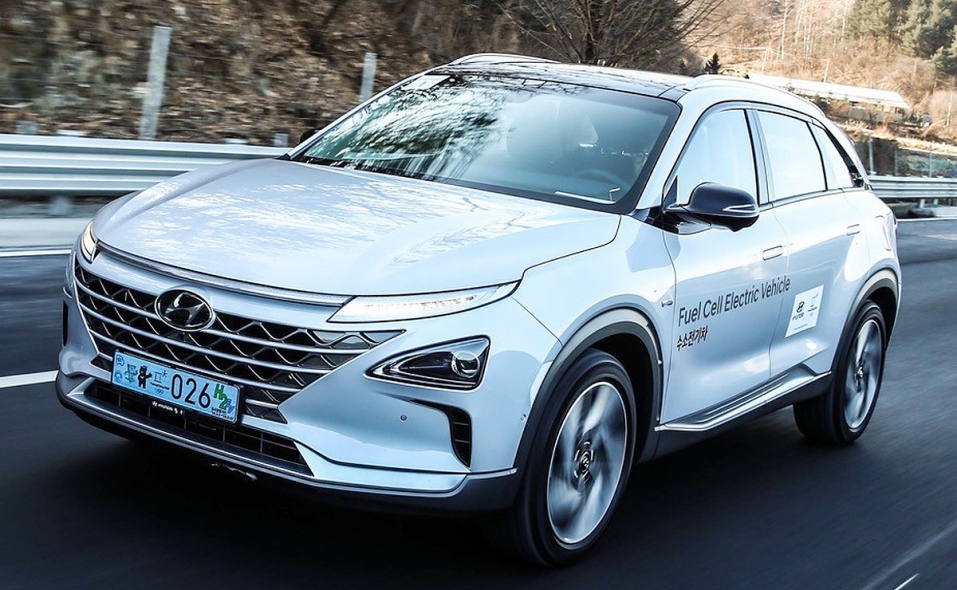 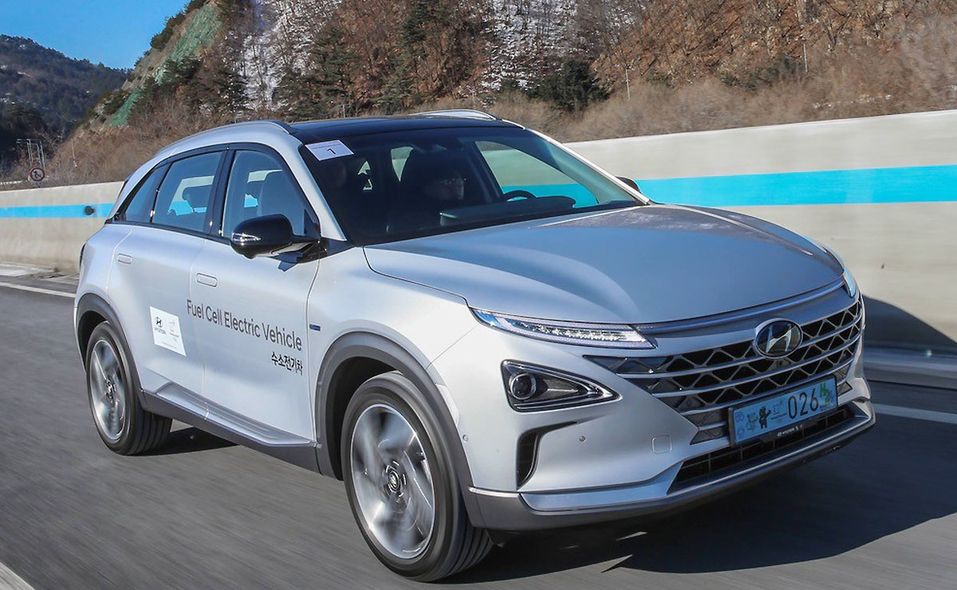 The Nexo is a technological showcase for Hyundai.
Share 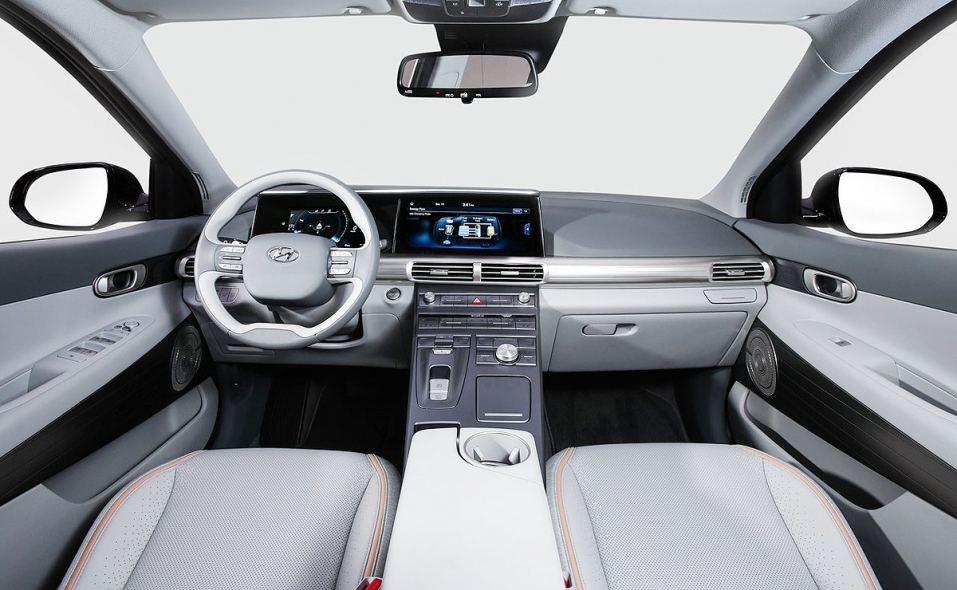 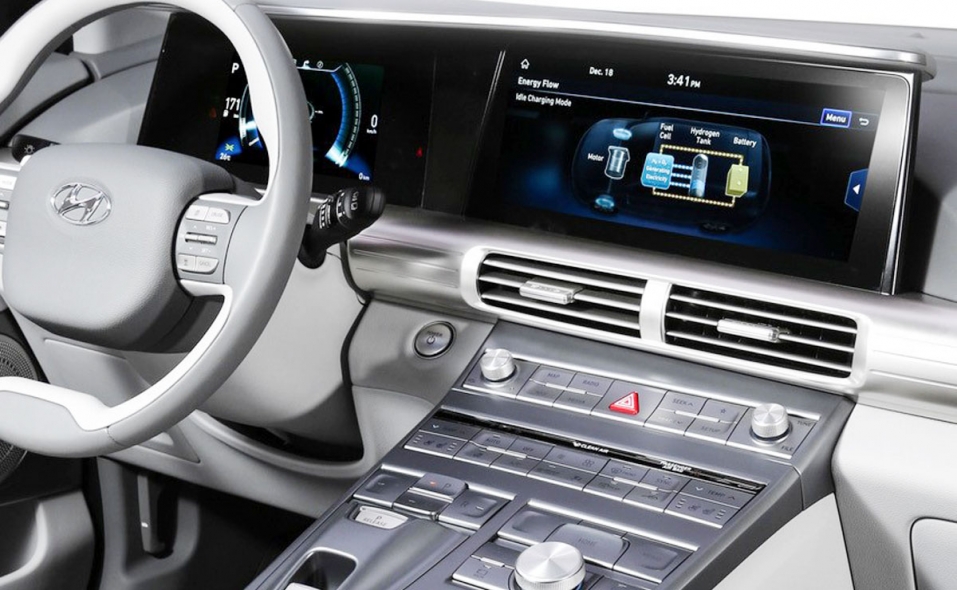 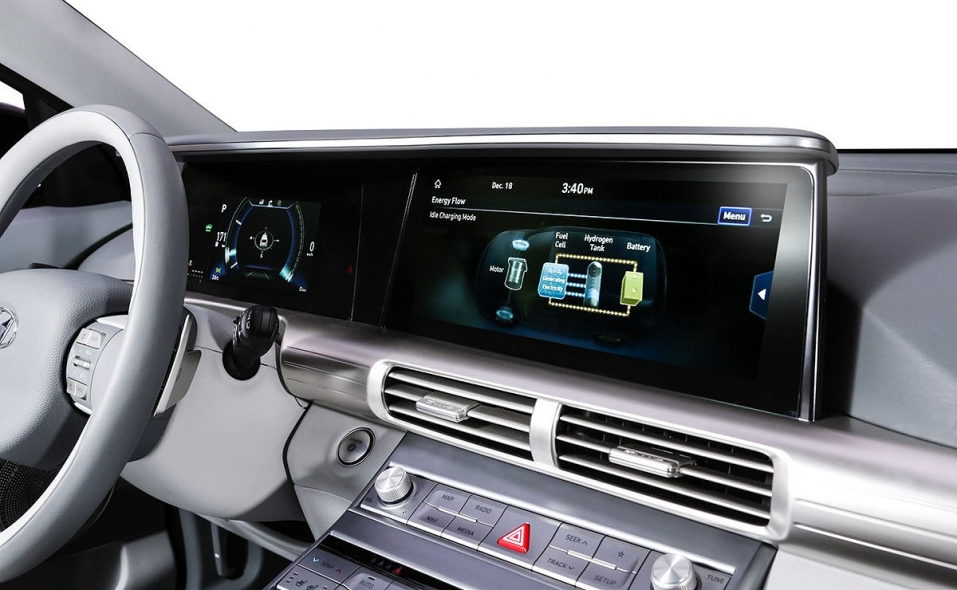 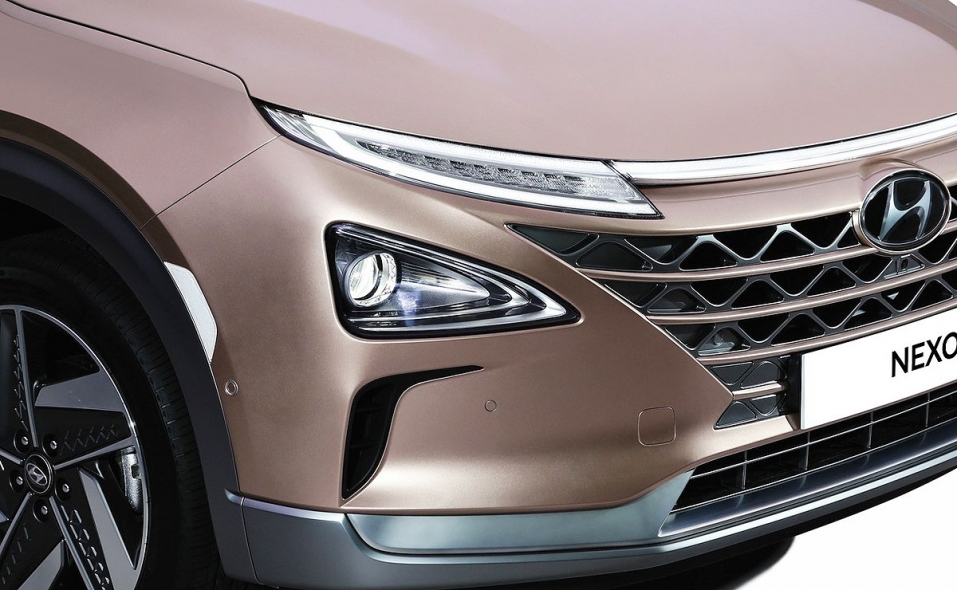 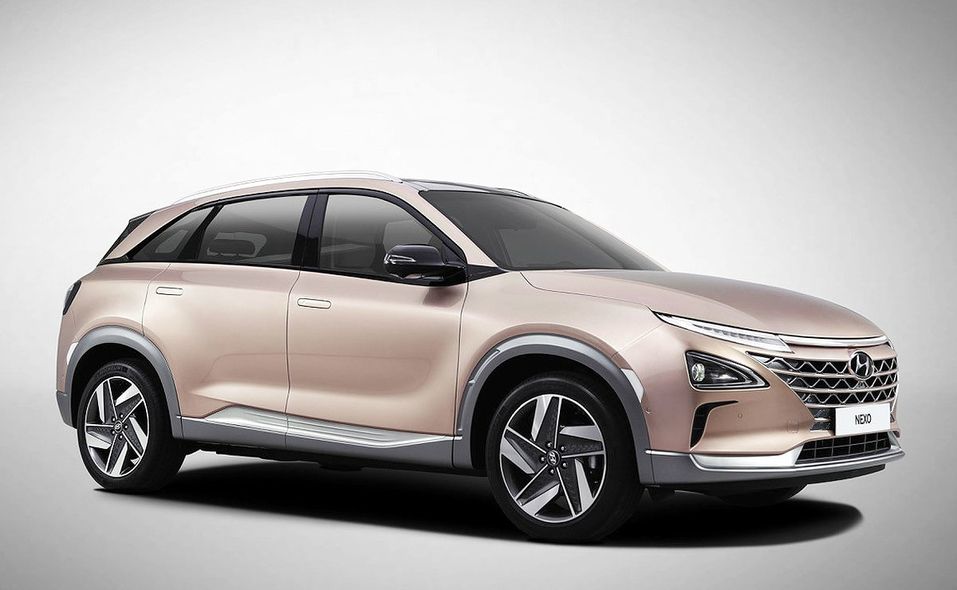 The Nexo goes on sale in South Korea this month before reaching Europe in the late second quarter and the U.S. in the fourth quarter this year.
Share 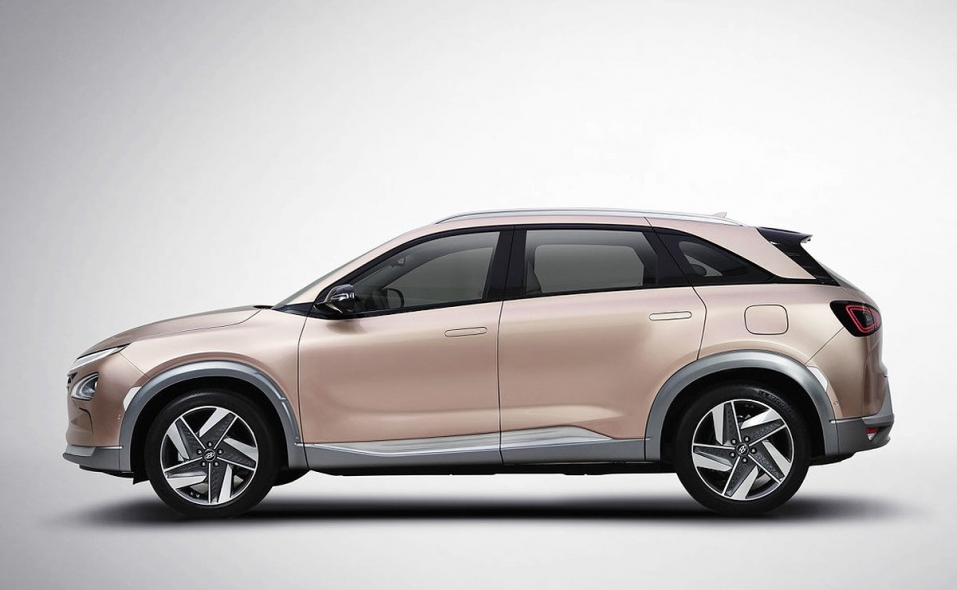 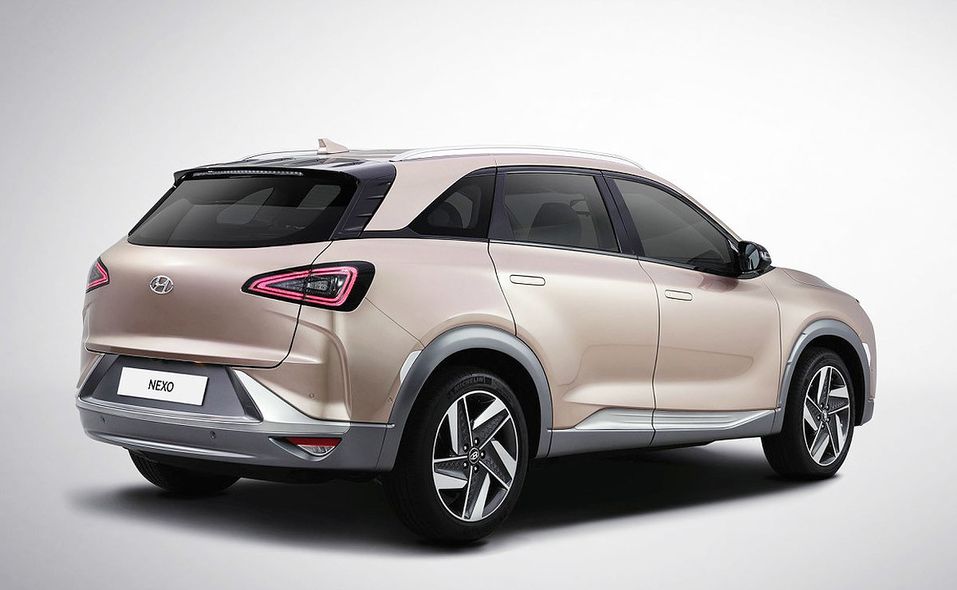 PYEONGCHANG, South Korea — A curious Korean vehicle was shuttling around the snow-shrouded slopes of the Olympic Village at the Winter Games this month.

On the outside, the sleek new Hyundai Nexo looks every bit the typical crossover. But under the skin, it is packed with advanced autonomous driving technology and a hydrogen fuel cell.

Most automakers envision the self-driving cars of tomorrow as pure electric vehicles. But Hyundai stands apart, saying fuel cells will be a much better match.

Its reason: The computers needed for fully autonomous cars — as previewed by the Nexo prototypes on trial at the Winter Olympics here — eat up huge amounts of electricity.

Hyundai wagers that pure EVs, with their relatively small battery packs, can't supply that much juice for long. But fuel cells, which function essentially as rolling power plants, can.

"If we get a perfect autonomous world, then the vehicle will need a lot of energy for computing," said Kim Sae-hoon, vice president of Hyundai Motor Group's fuel cell group. "We think hydrogen can provide a beneficial platform."

Hyundai's high-tech demo vehicles are modified versions of the Nexo fuel cell crossover that is due in the U.S. in the fourth quarter. The production version won't get the full range of self-driving functions. But it is still a showcase that seeks to quash any notion the South Korean automaker is a straggler in autonomous driving and next-generation eco-friendly drivetrains.

"These two are the hot issues now, and we wanted to combine these into one car," Kim said.

The Nexo marks a key step in Hyundai Motor Group's plan to introduce 38 green cars by 2025 and commercialize Level 4 autonomy by 2021. In early February, the modified Nexos drove themselves from Seoul to this Olympic host city, some 118 miles away. Hyundai called it the first time such sophisticated autonomy had been demonstrated with a fuel cell.

In Pyeongchang, the self-driving prototypes navigate roundabouts and intersections with Level 4 autonomy, dodging the tour buses and spectators that clog the streets. The driving was mostly smooth, with the occasional prolonged hesitation while encountering traffic. At least once, reporters say the Hyundai technician behind the wheel had to intervene as the car barreled toward a pedestrian crosswalk.

The vehicles are loaded with energy-sapping electronics. There are four lidar sensors, three millimeter-wave radars, one stereo camera, one Mobileye camera, a high-speed 5G cellular connection and high-definition mapping software.

The rear cargo space is stuffed with computers that run it all.

Fully autonomous add-ons can consume as much power as 50 to 100 laptops, Hyundai's engineers say. And that can double the amount of energy needed to operate the vehicle.

And that's where the fuel cell edges a pure EV. Hyundai's Ioniq EV, for instance, has a 30-kilowatt-hour battery with enough energy to power the typical American household for about one day. But the Nexo, loaded with 13 pounds of hydrogen in its three tanks, can generate about 108 kilowatt-hours of electricity, or more than triple the EV's output.

"This is why some of us have postulated that an EV doesn't make the best sense," said Gilbert Castillo, Hyundai Motor America's senior group manager for alternative and advanced vehicle strategy.

Hyundai says it wants to commercialize Level 4 autonomous driving in "smart cities" by 2021. In January, it teamed with U.S. startup Aurora Innovation to develop such systems.

The carmaker envisions having fully autonomous systems ready by 2025.

One key feature of the Level 4 Nexo is its 5G cellular connection courtesy of South Korean mobile phone provider KT Corp. The 5G system is up to 100 times faster than today's 4G systems and provides lightning quick connections for a variety of Internet-based systems.

One of them, Home Connect, allows drivers to view home camera images in real time and do such things on the go as turn off the TV at home, or turn on the air conditioning. Another system, called Assistant Chat, acts as a digital assistant answering questions. For those who need to get their diva on, there is even a karaoke application called Everysing.

The production Nexo, though less equipped than the prototypes, still gets Hyundai's most advanced market-ready autonomous technology. That includes an around-view monitor that beams blind spot images to a display in the center console of the vehicle while changing lanes.

Hyundai calls that a first of its kind.

A lane-following assist function — a first for Hyundai — enables the vehicle to steer itself down the road and keep centered in the lane. It works at speeds from 0 to 90 mph.

A Hyundai Nexo self-driving prototype is loaded with electronics including lidar and radar sensors, cameras and high-definition mapping software.

Hyundai also is deploying a remote parking assist function in the Nexo. That system will allow the crossover to park itself with the touch of a button, even when no one is inside. Hyundai bills it as a handy feature for parking in crowded cities or narrow garages.

Under the hood, Hyundai says the Nexo bests its predecessor, the Hyundai Tucson fuel cell EV crossover, in every category, from power and durability to acceleration and range.

The Tucson fuel cell crossover debuted in 2013, but Hyundai sold only about 800 of them cumulatively in South Korea, the U.S. and Europe.

Hyundai expects the vehicle's driving range to reach 370 miles under U.S. EPA testing, but there is no official rating yet. If so, it would be the world's best for a fuel cell vehicle, edging the Honda Clarity's 366 miles.

Hyundai hopes wrapping that technology into a sleek design that taps the red-hot crossover segment will wow the public as a serious choice for a tech-savvy green car — not just a science project.