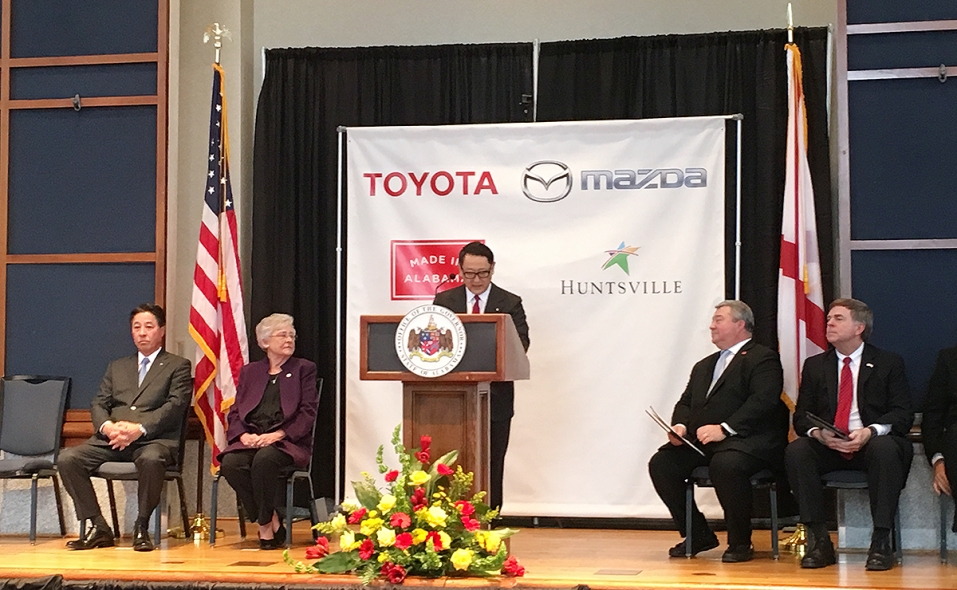 Toyota Motor Corp. President Akio Toyoda speaks during an announcement that Toyota and Mazda will jointly build and operate a new, $1.6 billion auto assembly plant near Huntsville, Ala. 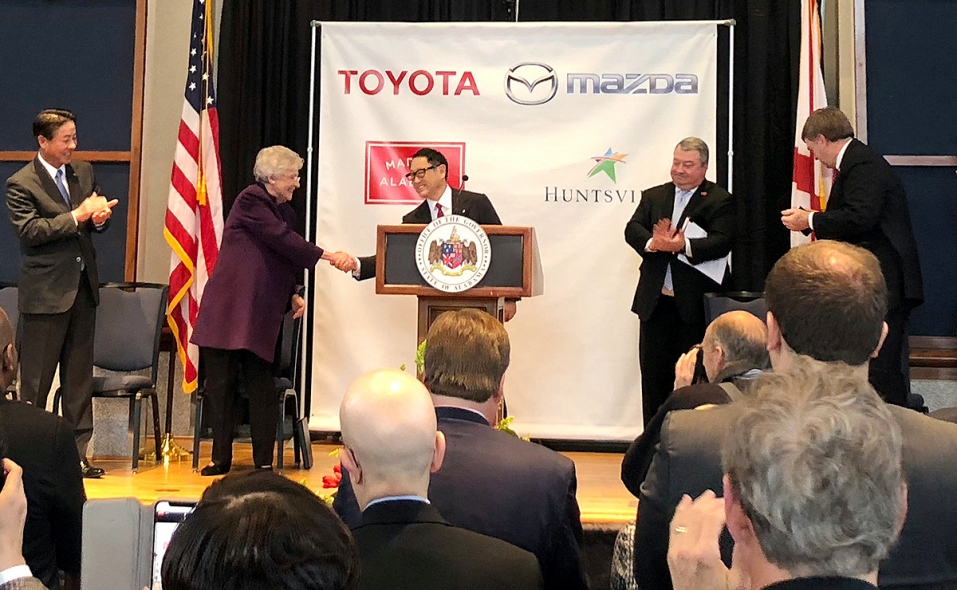 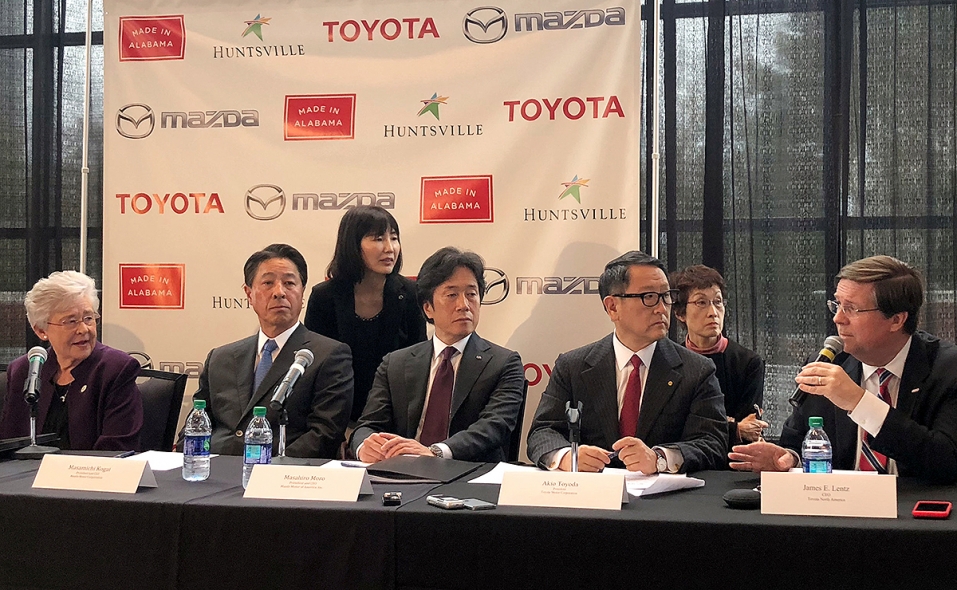 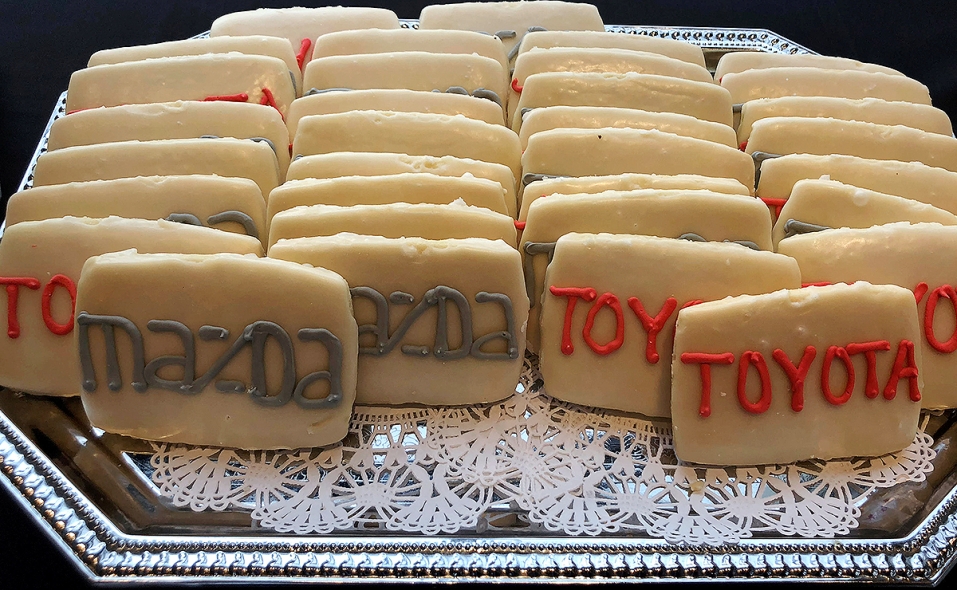 DAVID SHEPARDSON/REUTERS
Cookies bearing the names of Toyota and Mazda are seen ahead of an announcement for a new $1.6 billion joint venture assembly plant to be built in Alabama.

The plant, which will employ up to 4,000 people and produce about 300,000 vehicles a year, will be located in the Huntsville region and is a boon for the state, where Toyota has a large engine plant and an existing network of automotive suppliers.

"Together, I am confident we will create yet another 'Built in America' success story," Toyota President Akio Toyoda said.

The plant is expected to launch production in 2021. Toyota said the site for the new plant is about 14 miles from Toyota’s Alabama engine plant (Toyota Motor Manufacturing Alabama Inc.).

“The partnership between Mazda and Toyota will expand innovative automotive manufacturing in Alabama,” Alabama Gov. Kay Ivey said in a statement. “Their decision to locate this new facility in Huntsville is a testament to the talented workforce in our state. We are proud that this partnership puts Alabama on the forefront of technology in this dynamic global industry."

In a statement, Mazda CEO Masamichi Kogai said: "Mazda makes cars with a clear vision of how we want to inspire people, contribute to society and help preserve the beauty of the earth. By making such cars here in Alabama, we hope that over time our plant will come to occupy a special place in the hearts of our employees and the local community."

The new plant -- in a state Trump won by 28 points in 2016 -- could be a political boost to the Republican president, who has urged automakers to build plants in the United States and add jobs.

Trump tweeted in March he wanted "new plants to be built here for cars sold here."

The announcement also comes at a time of declining U.S. auto industry sales, so it could exacerbate overcapacity and add pressure to cut prices. U.S. new vehicle sales fell 2 percent in 2017, after hitting an all-time record high in 2016, and are expected to fall further in 2018.

In recent months, the companies had narrowed their choices down to sites in Alabama and North Carolina.

North America accounted for about a quarter of Toyota’s total vehicle sales in 2017, and about 36 percent of revenue.

Mazda, which gets a third of its revenue from North America, currently imports all of the models it sells in the U.S. It plans to produce crossovers alongside Toyota Corolla compact cars at the joint plant.

Mazda CEO Masamichi Kogai at Wednesday's announcement: "Mazda makes cars with a clear vision of how we want to inspire people, contribute to society and help preserve the beauty of the earth. By making such cars here in Alabama, we hope that over time our plant will come to occupy a special place in the hearts of our employees and the local community."

A year ago, President-elect Donald Trump criticized Toyota and threatened hefty tariffs against the Japanese automaker if it built its Corolla sedan for the U.S. market in Mexico.

Toyota and Mazda announced plans for a new plant in August. Toyota said it would shift production of Corollas from Canada to the new venture rather than in Guanajuato, and would build Tacoma pickups in Mexico instead. Mazda plans to build new crossover SUVs at the plant.

Trump praised the joint venture announcement, saying in August on Twitter: "Toyota & Mazda to build a new $1.6B plant here in the U.S.A. and create 4K new American jobs. A great investment in American manufacturing!"

In October, Toyota said it would scale back investment in a planned plant in Mexico by 30 percent to $700 million and cut planned annual capacity in half to 100,000 vehicles as it shuffles its production plans to meet market demands.

Toyota has 10 U.S. plants in eight states in an arc running from West Virginia through Kentucky, Indiana, Alabama, Mississippi and Texas.

Toyota and Mazda announced a capital alliance in August and are exploring joint development of technologies for the basic structure of competitive electric vehicles.

Over the last 30 years Toyota, along with German and Asian automakers, has built a second auto industry in the United States, rivaling the operations of the Detroit 3 automakers in size and employment, but with newer, and fewer unionized, plants.

The Alabama Department of Commerce shows 150 of the large automotive suppliers operate in the state, providing the logistical strength that Kristin Dziczek, a researcher at the Center for Automotive Research in Michigan, said helped land the plant.

Dziczek said that Alabama in 2017 was tied for fifth among U.S. states in auto production, at 9 percent with Tennessee. It was behind Michigan at 19 percent; Indiana at 12 percent, Kentucky at 11 percent; and Ohio at 10 percent.

"The impact of an auto assembly plant extends beyond its immediate economic impact, and that's why states offer robust incentives," said Dennis Cuneo, a site-selection consultant and former Toyota executive. "It creates a halo effect that in turn helps attract other projects."

Alabama spent an estimated $250 million to woo Daimler AG's Mercedes-Benz to put an auto plant in Tuscaloosa two decades ago.

Rivian plans 2nd shift after falling behind on production target